OPINION | KAREN MARTIN: A farmer's shift from plowing to painting

Miranda isn't the first hard- working woman who has to put up with a no-'count husband. But she's one of the most delightfully congenial.

I met Miranda on a hot pre-summer afternoon, during a recent visit to Shiloh Museum of Ozark History in Springdale. After meandering through the museum's astonishingly detailed relic-filled exhibits on the region's prehistoric era, its settling (no small feat), the period from the Civil War to World War, the 1920s to 1950, and modern times, I turned a corner into a gallery space where Miranda's life is illustrated, frame after frame, in a collection of primitive paintings that are stunning in their simplicity and good nature.

That no-'count husband, Hezzakiah, and Miranda are the subjects of some 55 renderings of Ozark country life by self-taught artist Essie Ward. The series focuses on the couple at work on their farm--with Miranda working and Hezzakiah mostly trying to look busy while involving himself in much less stressful pastimes.

Essie Treat Ward knew her subjects well. Born in the Searcy County community of Nubbin Hill in 1902, she married Jesse Ward in 1922; the couple raised chickens, hogs, vegetables, fruit trees, and seven children on a small farm near Marshall.

Much of the heavy lifting that is farm work fell to Essie when Jesse was diagnosed with diabetes. That continued until 1959, when she was diagnosed with cancer. After undergoing surgery, her doctors ordered her to slow down. That's when her focus shifted from plowing to painting.

We've all heard the expression "Write what you know." Essie Ward painted what she knew, and she definitely knew Miranda and Hezzakiah.

They are joined by an array of simply rendered recurring rural characters and objects, including a white mule, chickens, ducks, a fierce goat, a black cat, a fence, a log cabin, an outhouse with a quarter-moon cutout, low-tech farm equipment, and flower beds.

My favorite, titled "Climb That Thar Saplin Miranda," shows a determined goat, horned head lowered, chasing after an unaware Miranda as she crosses a fenced enclosure; Hezzakiah is halfway up a tree, observing the impending disaster but apparently doing nothing to stop it other than offering tree-climbing advice.

The same aggravated goat chases Hezzakiah toward the house where Miranda stands on the stoop; it's called "Get the Door Open Miranda."

Another, titled "Siesta," depicts Miranda walking toward the white mule, harnessed to a plow and standing with lowered head as Hezzakiah, who presumably is supposed to be handling the plowing, lies in the grass nearby, lounging in the sun.

According to the Shiloh Museum of Ozark History, which owns 55 of her works, Ward painted on masonite, holding the board in her lap, with oil paints straight from the tube. She usually finished one picture a day.

She developed a modified form of mass production for her customers: a series of 55 Miranda and Hezzakiah scenes, hand-painted with landscapes shaded correctly for the season of the year. Customers selected one of the scenes when they placed their order. The artist's trademark, which appears in every painting, consists of two tiny white marks that resemble rabbit or mule ears. Hundreds of paintings in the Miranda and Hezzakiah series hang in public and private art collections around the world.

According to the Encyclopedia of Arkansas and other sources, Essie Ward was inspired to create these characters when a visitor came to her with a photograph of a woman churning butter in the doorway of a log cabin. "He had carried that picture in his billfold for 30 years, trying to find somebody to paint it," Ward said. She tried her hand at it, and as she recalled, "it turned out real good."

In a 1971 interview she remarked, "[Painting] is all I've ever wanted to do, yet I never studied anything about painting. I guess you could say I just paint as I see it--actually, or in my memory. Others like what I do. That's a real satisfaction."

So was being invited to participate in the Smithsonian's Festival of American Folklife in Washington, D.C., in 1970.

Essie Ward died in 1981 at the age of 79, and is buried at Canaan Cemetery in Marshall. The Shiloh Museum exhibit, "I Just Know I Like to Paint: Ozark Folk Artist Essie Ward" continues through Jan. 8, 2022. To learn more visit shilohmuseum.org/project/i-just-know-i-like-to-paint/. 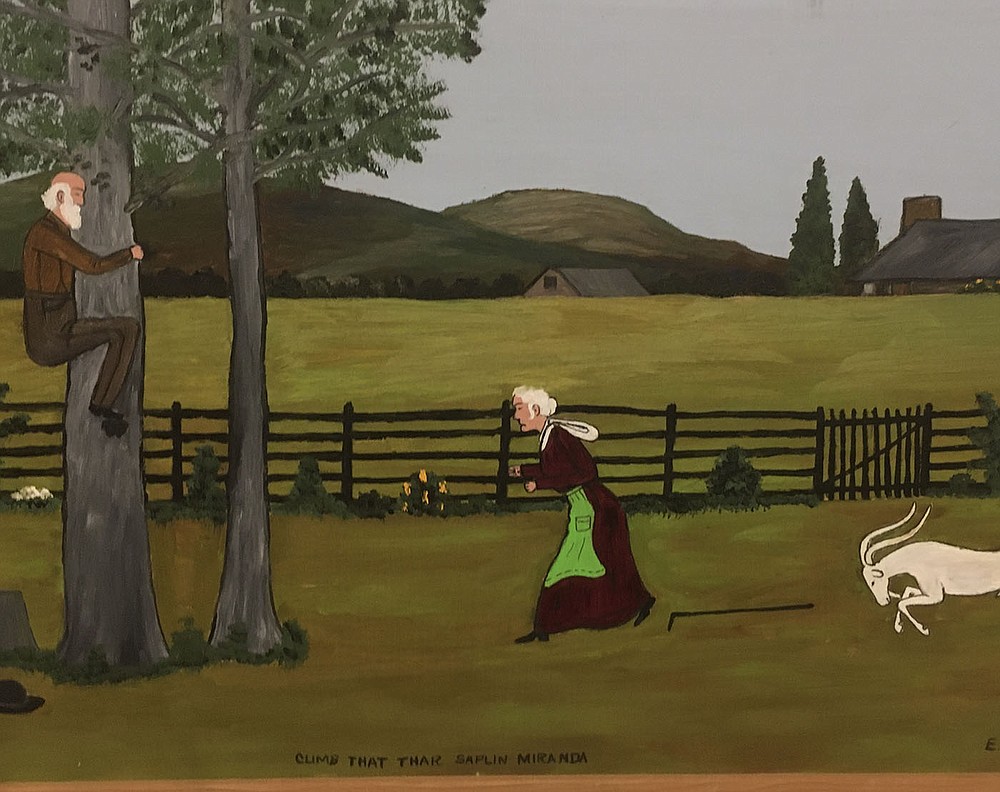 Print Headline: A farmer's shift from plowing to painting