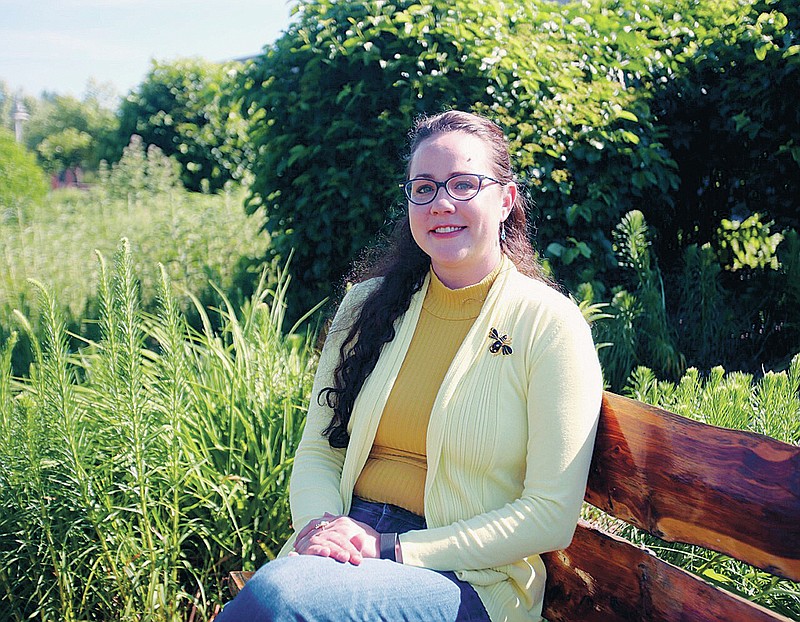 Nicole Muszynski, assistant professor of psychology at Hastings College, poses for a photo in the Rain Garden, Wednesday, June 23, 2021 in Hastings, Neb. Growing up in Texas and Hawaii, Nichole Muszynski was never abuzz about bees. So it is as much a surprise to the 32-year-old psychology professor as it is to all who know her that she now finds them so becoming. (Amy Roh/The Hastings Tribune via AP)

HASTINGS, Neb. -- Growing up in Texas and Hawaii, Nichole Muszynski was never abuzz about bees. So it is as much a surprise to the 32-year-old psychology professor as it is to all who know her that she now finds them so becoming.

Muszynski, who relocated to Hastings from Hawaii in June 2020, is incorporating the study of honeybees into her lesson plans as assistant professor of psychology and sociology at Hastings College.

To accommodate plan bee, four departments on campus have pledged funding to move two honeybee hives on campus near the Morrison Reeves Science building. The interdisciplinary project, which Muszynski hopes will be ready in time for fall semester studies, will provide convenient access to bees for psychology-related experiments and studies across multiple departments.

"There are lots of things to do with bees," she said. "So far, we've only really discussed, 'What would you do if you could do it?' When we have bees on campus, I can have my students design experiments for bees and go out and do them."

Titled "Category difference facilitates oddity learning in honeybee (Apis mellifera)," her award-winning dissertation is a collaborative effort written with P.A. Couvillion when the two worked together at Pacific Biosciences Research Center in Hawaii. Published in the Journal of Comparative Psychology, the paper was recently awarded the Frank A. Beach Comparative Psychology Award as the year's top paper in the division for neuroscience and comparative psychology.

"It was a surprise, to be honest," Muszynski said. "I'm really interested in studying non-human animals and humans. The goal is to see if there are similarities or differences between different species and their cognitive abilities: learning, memory, attention and problem solving.

"Some people look to see if there are differences in general behavior, structures of groups of organisms. I'm more interested in learning and memory."

What has mystified Muszynski most in her studies of honeybees has been just how smart they seem to be. Compared to other non-human species, their ability to differentiate shapes -- given the comparative size of their brains -- is truly befuddling. Given an oddity problem calling for identification of an odd shape from a grouping, bees exhibited a surprising capacity to find the outlier in about an hour, considerably faster than times clocked of young children, sea lions and chimpanzees.

Honeybees have 1 million neurons (brain cells). Comparatively, the human brain has 86 billion neurons, while cats or dogs have billions of them. And yet findings exhibited in the study suggest honeybees possess an unbelievable learning capacity similar to that of much larger animals.

"We gave bees an oddity problem, laying out four objects," she said. "The fact that a bee can do a problem that a human, chimp and cat can do suggests there is something going on that was conserved evolutionarily across time to make that happen.

"What's surprising is how fast they do it. It can take a cat or a sea lion months and months to learn it, and a bee can learn this problem in about an hour. What's going on?"

"The goal of my research was to focus more on the complex kind of learning bees might show," she said. "People are surprised that a lot of psychology experiments are conducted on animals and also vertebrae for research on the human brain. A lot of what we know about the brain comes from invertebrates.

"To study the brain, you have to look at organisms that are simpler. They (non-human brains) have less neurons, and we can see sometimes how the brain cells work in simpler organisms."

Muszynski is excited by the endless possibilities the two beehives will bring to campus for exploring bee-related behaviors. Potential topics of exploration may include environmental impact research addressing how they are able to survive brutally cold Nebraska winters, how mites and beetles are able to infiltrate and destroy colonies, and which types of flowers bees prefer to pollinate.

"I don't know if anyone has ever done an experiment to test bee preferences to flowers," she said. "It's a simple question with no science-quick answer, which is kind of neat."