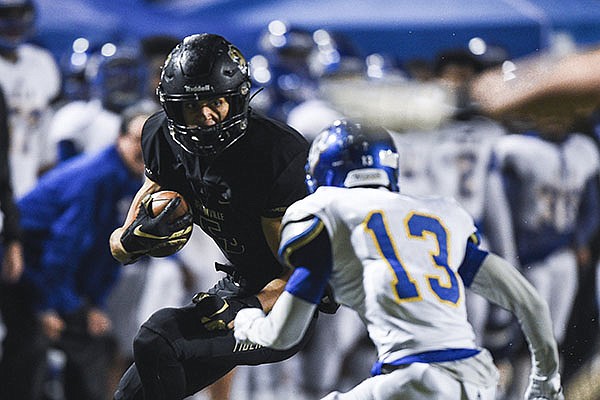 Bentonville receiver Chas Nimrod (5) runs with the ball during a game against North Little Rock on Friday, Nov. 29, 2019, in Bentonville.

“I learned a lot about the programs I took visits to and picked up a lot of knowledge from talking to the players and asking questions,” Nimrod said Wednesday during a break in the Southwest Elite 7-on-7 Tournament at Shiloh Christian.

That has led to a decision likely coming sooner than later for Nimrod, whose team recently added 2023 offensive lineman Joey Su’a (6-5, 319), who has offers from Georgia, Michigan State, Maryland, Fresno State, BYU and other programs.

“I will probably be committing before the season,” Nimrod said.

Nimrod actually made several unofficial visits to the Arkansas campus in June to get to know new Razorbacks receivers coach Kenny Guiton.

“Me and Coach G talk pretty often,” Nimrod said. “During June, I would go up there on Wednesdays and learn about the offense and hang out with Coach G, get a feel for him and just see what it was like up there.”

The relationship with his position coach will be one aspect that will factor into his college decision, per Nimrod, who moved to Bentonville from Branson, Mo., when he was in the second grade.

“The relationship with the receiver coach and if it feels like home,” Nimrod said. “It has to feel like home. I have grown up here basically my whole life and I love it here.”

He is coming off a junior season in which he caught 36 passes for 770 yards and 12 touchdowns for Tigers coach Jody Grant.

“He is as special of a receiver as I think we have had in a long time, and we have had some good ones,” Grant said. “He is not really a vocal guy, but he just comes to work every day and wants to improve his craft.”

Nimrod originally thought his path to being a collegiate athlete would be playing soccer.

“It really has been a dream of mine to play college sports, but I didn’t know it would be football because I grew up playing soccer,” Nimrod said. “I just knew my parents weren’t going to have to pay for my college because I made a promise to myself about that.

“I picked up football in the eighth grade and just took off with it. I’ve been blessed by God with my abilities and the opportunities I have ahead of me.”

Grant said Nimrod’s football career can be traced back to a physical education class.

“His brother was our kicker about three years ago and is at Arkansas State now as their kicker,” Grant said. “His mom and dad are kind of a soccer family and he grew up doing that.

“But our receivers coach had in in a PE class and saw what type of athleticism he had and we basically had to convince his mom to let him play. They saw his abilities and saw how successful he could be at that and the entire family embraced it.”

“One story I tell people is that in early December I am going to shut down the facility and he is in there by himself with cones working on some cuts,” Grant said. “That showed me a lot about what he thinks about his future. Not a lot of kids do that after the season is over.

“He is working hard, has done great things and, to me, is about as elite a receiver as there is in the state.”

Nimrod is confident in his ability, but continues to put in the work.

“Individually, I just want to do better than I did last year,” Nimrod said. “I continue to work on everything, but I am confident in my speed, my route running and my hands.”

Bentonville, which finished 10-1 last season, expects to contend for the Class 7A state title again.

“For the team, we just want to keep doing what we are doing,” Nimrod said. “Everybody knows the standard with us and we know that we are going to get everybody’s best shot each week.”