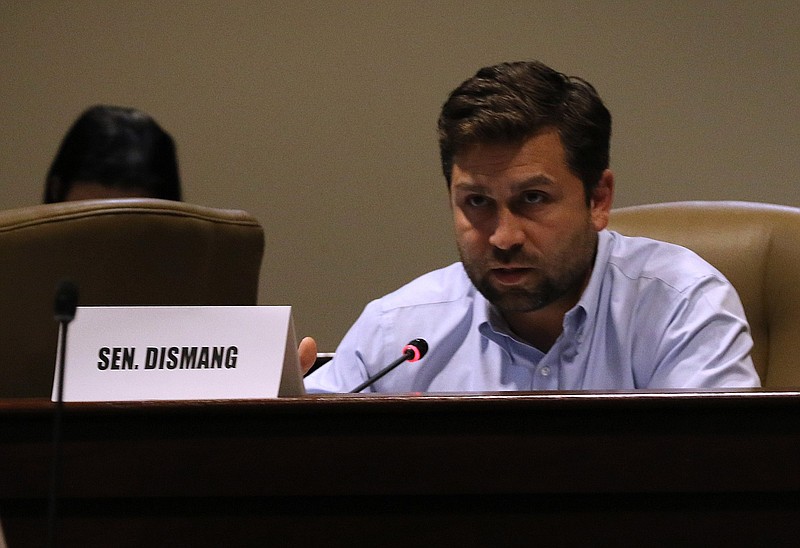 State Sen. Jonathan Dismang (top right), R-Beebe, is shown during a hearing of the Highway Commission Review and Advisory Subcommittee of the Arkansas Legislative Council at the state Capitol in Little Rock in this June 17, 2021, file photo. (Arkansas Democrat-Gazette/Thomas Metthe)

State lawmakers want to hire a consultant to advise them on matters such as estimating the fiscal impact of proposed legislation and forecasting how much the state will collect in revenue.

The Bureau of Legislative Research issued a request for proposals from consultants on June 21 and is accepting them through Aug. 30.

Legislative leaders' aim is for the Legislative Council in December to approve a contract with a consultant, effective Jan. 1, 2022, after the council's Executive Subcommittee interviews candidates and makes a hiring recommendation.

The consultant would report to the Joint Committee on Economic and Tax Policy.

The work would be similar to that done by the state Department of Finance and Administration. The department, however, reports to Gov. Asa Hutchinson.

Act 876 of 2021, which becomes effective Jan. 1, 2022, will require the finance department secretary to provide the Bureau of Legislative Research with "direct access to nonconfidential aggregate and statistical information derived from state tax collection and administrative records for use in state budgeting and forecasting and the preparation of fiscal impact statements on proposed legislation."

The information would be shared with the consultant.

Hutchinson signed Act 876 because the measure was highly supported in the state Senate and the state House of Representatives, said Hutchinson spokeswoman Shealyn Sowers.

"The services for which [the Bureau of Legislative Research] is seeking to hire a consultant would not duplicate the work of [the Department of Finance and Administration]," Sowers said in a written statement. "This legislation permits the General Assembly to hire their own economists to provide dynamic fiscal calculations of bills which is different from the fiscal impact analysis performed by DFA.

"The legislature understands the enormous workload they place on DFA during session and this will allow additional work to be performed without further burdening DFA," Sowers said.

Sen. Jonathan Dismang, R-Searcy, who is the Senate sponsor of the bill that became Act 876, said the consultant hired by the Bureau of Legislative Research will give lawmakers greater confidence in making decisions on tax bills.

"It would be good to have a second set of eyes and help [the finance department] to make sure they haven't missed anything on its calculations," said Dismang, who also is vice chairman of the Senate Revenue and Taxation Committee.

House Revenue and Taxation Committee Chairman Joe Jett, R-Success, who also sponsored the bill that became Act 876, said his measure "is not a shot" at the finance department.

"This bill is in no way, shape and form to question DF&A and the work they do for us," he told the House tax committee in April.

During the past nine years, lawmakers have talked about getting "dynamic scoring" of tax bills, but the finance department "scores everything in the static sense," Jett said.

For example, the bill might cost the state $3 million in the static sense, "but the money that will come back to the state through economic growth will be tremendous" and outstrip that cost based on dynamic scoring, he said.

"Several folks in leadership were talking about maybe we can actually have our own consulting firm ... during the session [and] time to be able to consult with them to get some answers to these questions," Jett said. "We are trying to figure out what we do let out [of the House tax committee], what we try to hold, based on how much money is coming back to the state."

He added, "Everybody, keep in mind they [DF&A] do work for the executive branch and they don't really work for us. They answer to the governor."

Jett said the finance department is overloaded during each regular session estimating the impact of tax bills on state revenue collections.

"I think this is just another tool that just kind of spreads the workload out that helps everybody," he said. "We are dealing with so much money here."

For example, he said "we found a mistake" in the governor's then-proposed income tax cut plan before the 2019 session.

At that time, a finance department official acknowledged that the governor's proposal would increase net state income taxes for roughly 20,000 taxpayers by more than $30 million. The Republican governor said he wanted to fix his plan to make sure that no taxpayers would pay more net income taxes.

John Shelnutt, the state's chief economic forecaster at the finance department, said the department doesn't do dynamic scoring of tax bills because, "although dynamic scoring could theoretically provide feedback information for impact adjustments on the tax base, economic models for state-level analysis cannot provide adequate timing information for these additional impacts."

"At the national level, such dynamic effects may be used in a 10-year forecast by [the Congressional Budget Office] and congressional research to address these theoretical relationships such as changes in investment, employment and consumer spending," he said.

"Models that provide theoretical and instantaneous dynamic feedback could overstate the short-term impact and introduce additional forecast risk for the short-term state budget planning process. Medium- and long-run impacts for use in 5- or 10-year planning horizons are not currently compatible with short-term budget planning and control mechanisms. The state's legal restriction against deficit spending also provides a barrier for bridging short-term (static) and long-term (dynamic) impacts."

The finance department has provided assistance to the Arkansas Economic Development Commission for long-term dynamic scoring for super project impacts such as for the Big River Steel project analysis, Shelnutt said.

"Dynamic scoring for long-term investment projects with state and local incentives allows for economic and tax feedbacks to play out over longer periods, with allowance for investment timing, construction phases, and any anticipated expansions," he said.

According to the Bureau of Legislative Research's request for proposals, the consultant's scope of work will include:

• Providing consultation and advisory services regarding the proposed legislation.

• Providing budgeting and forecasting research and analysis as requested, including reports regarding updates to state and federal laws and best practices in state budgeting.

State Rep. Les Warren, R-Hot Springs, told his colleagues on the House Revenue and Taxation Committee that he likens the bureau hiring such a consultant to the bureau's long-standing practice of hiring an actuary to estimate the financial impact of retirement bills beyond the estimates of the actuaries of the retirement systems.

"You are getting a total picture of what you are facing, not just revenue cuts, but the different side of this picture as well."