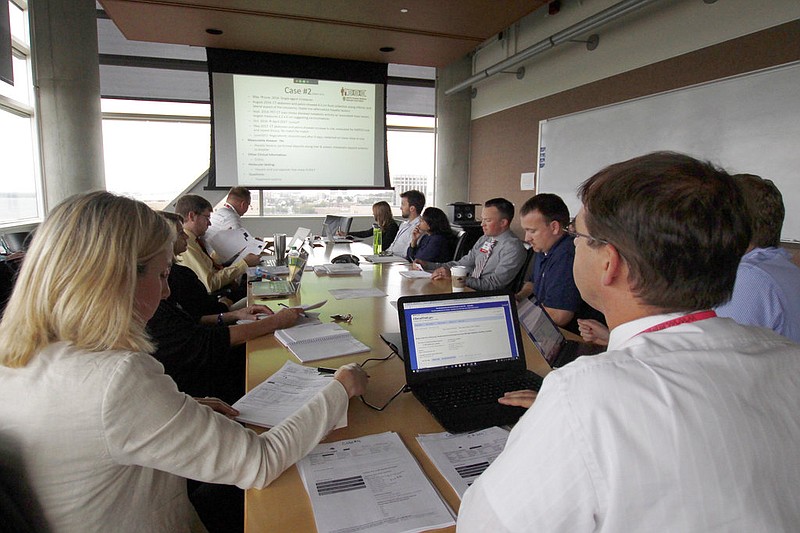 Doctors, pharmacists, geneticists and others meet to discuss how to best treat cancer patients at the University of Wisconsin Carbone Cancer Center in Madison, Wis., in this Aug. 17, 2017, file photo. (AP/Carrie Antlfinger)

More than a third of the nation's top cancer treatment centers have no Black or Hispanic leaders, and white men are over-represented in powerful roles at the sites, a new study led by a University of Arkansas for Medical Sciences medical student reveals.

The analysis published in the online journal JAMA Network Open in June looked at racial, ethnic and gender diversity among people in the highest leadership positions at 63 National Cancer Institute-designated cancer centers. It excluded a handful of similar centers that are laboratory-based.

Of 856 doctors and administrators in such roles, just 29 were Black and 32 were Hispanic -- each group comprising less than 4% of the total, the review found. Broadly, Black, Hispanic and Asian leaders "did not have proportionate space at the decision-making table," especially when compared with the cities where the centers were located, researchers wrote.

The findings suggest a pipeline problem for professionals of color seeking the most influential positions in cancer care. Their diversity matters because it's thought to improve outcomes, both in oncology and other specialties. Patients do better when treated by doctors who look like them or share a cultural background, some public health experts have found.

The issue among health systems' leadership has "always been there. Everybody knows it -- but there hasn't been any data to show it," Austin Morgan, the UAMS student who led the project, said in a phone interview last week. Morgan is entering his third year of medical school and is an aspiring radiation oncologist.

Now, in the wake of racial justice efforts, such as the Black Lives Matter movement and similar research, "the conversation is finally coming to light," he said.

The reckoning around race has lately roiled medicine's institutions, including at the Journal of the American Medical Association, where the top editor resigned after a race-related controversy. This month, the accreditation of Tulane University's medical school was placed on probation over alleged racial-discrimination issues, The Associated Press reported.

For their study, the UAMS researchers used facial-recognition technology trained on real and synthetic faces to analyze photographs and identify race and gender among the cancer treatment centers' leaders. The team then confirmed the technology's findings via hand-review.

In cities where at least 20% of residents are Black, 21 of 33 cancer treatment centers didn't have a Black member on their leadership team, the study found. Centers in the South and those with women in key roles were more likely to show diversity among leadership teams.

The review also found that 36.3% of people in senior leadership positions at the National Cancer Institute cancer centers were women. That's fewer than the proportion of women in the general population, but closely matches the percentage of practicing physicians who are women -- about 35%, the study said.

Morgan said he was not particularly surprised by the data.

"You get into a leadership position, and whenever you have an opportunity to put someone else in the position, you're more than likely to pick someone that reminds you of yourself," he explained. With a "predominance" of white men in leadership roles, he said, that likely leads to similar successors.

Morgan's team conducted the study against the backdrop of UAMS' multiyear pursuit of its own National Cancer Institute designation. The status -- which would be the first center in Arkansas -- confers access to grant funding and would bring new treatment options and clinical trials to local cancer patients, officials have said.

It's not clear if or how the National Cancer Institute considers diversity among faculty members and administrators when reviewing applications for the agency's formal status.

In April, UAMS appeared on a Forbes magazine list of the nation's "best employers for diversity," ranking seventh in the country, according to a blog post. However, data about the racial composition of the health organization's leadership wasn't immediately available Friday.

Dr. Michael Birrer, the gynecological oncologist hired to direct UAMS' Winthrop P. Rockefeller Cancer Institute in 2019, appears to be white. Hiring women and minorities to work at the cancer center is a priority, a spokeswoman said.

The study had some limitations. Gender categories might not have appropriately labeled people who identify as nonbinary or gender-non-conforming, researchers wrote, and people of Middle Eastern descent were grouped as white -- mirroring U.S. Census categories but possibly not accounting for their contributions to diversity.

Widely promoting open positions, training to root out implicit bias and making diversity a formal goal of health systems could help address some of the disparities, the researchers proposed. The latter requires eliminating structural barriers to advancement, such as a lack of formal mentoring for people from minority groups, they wrote.

"The next question has to be, how are we going to change it?" Morgan said.

Two of the four closest National Cancer Institute-designated centers to Arkansas, in Tennessee and Missouri, didn't respond to emailed inquiries Friday about efforts to promote diversity on leadership teams. The University of Oklahoma's Stephenson Cancer Center "is committed to advancing diversity at all levels," a spokeswoman wrote in an email.