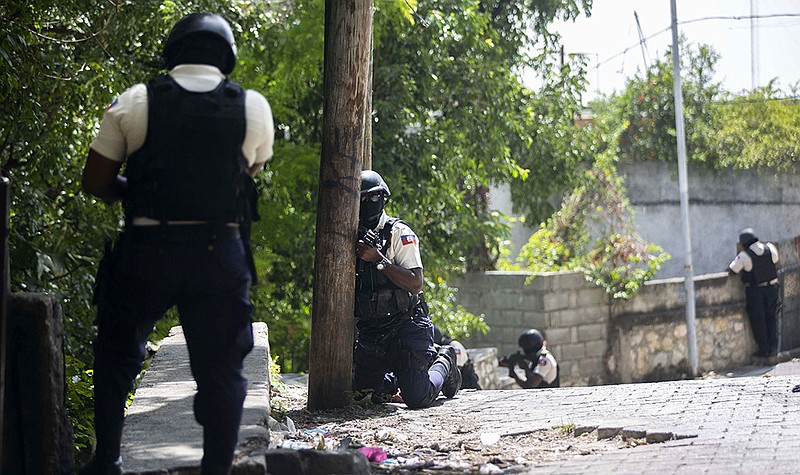 PORT-AU-PRINCE, Haiti -- The Colombians implicated in the assassination of Haitian President Jovenel Moise were recruited by four companies and traveled to the Caribbean nation in two groups via the Dominican Republic, the head of Colombia's police said Friday.

The U.S. said it would send senior FBI and Homeland Security officials to help in the investigation -- but there is no plan to provide military assistance at this time, a senior administration official said.

That statement came after Haiti's interim government said Friday that it asked the U.S. to deploy troops to protect key infrastructure as it tries to stabilize the country and prepare for elections.

"We definitely need assistance and we've asked our international partners for help," interim Prime Minister Claude Joseph told The Associated Press in an interview, declining to provide details. "We believe our partners can assist the national police in resolving the situation."

Gallery: Turmoil in Haiti after assassination

As the investigation moved forward, the killing took on the air of a complicated international conspiracy. Besides the Colombians, among those detained by police were two Haitian-Americans, who have been described as translators for the attackers. Some of the suspects were seized in a raid on Taiwan's Embassy where they are believed to have sought refuge.

At a news conference in Colombia's capital of Bogota, Gen. Jorge Luis Vargas Valencia said four companies had been involved in the "recruitment, the gathering of these people" implicated in the assassination, although he did not identify the companies because their names were still being verified.

In Washington, White House press secretary Jen Psaki said senior FBI and Department of Homeland Security officials will be sent to Haiti "as soon as possible to assess the situation and how we may be able to assist."

"The United States remains engaged and in close consultations with our Haitian and international partners to support the Haitian people in the aftermath of the assassination of the president," Psaki said.

The FBI released a statement saying: "The FBI is currently engaging with the U.S. Embassy in Haiti and our law enforcement partners to determine how we can best support this effort."

Another eight suspects remain at large, Charles said. "We are going to bring them to justice," the police chief said, as the 17 handcuffed suspects sat on the floor during a news conference Thursday.

Investigative Judge Clement Noel told the French-language newspaper Le Nouvelliste that the Haitian-Americans arrested, James Solages and Joseph Vincent, said the attackers originally planned to arrest Moise on a mandate from a judge, not kill him. Noel said Solages and Vincent claimed to have been acting as translators, the newspaper reported Friday.

"They said they turned themselves in because they did not feel like they had a choice," Noel said. "They did not have a mission to kill the president. When they realized that things had changed, they brought themselves to the police."

The same newspaper quoted Port-au-Prince prosecutor Bed-Ford Claude as saying he ordered an investigative unit of the national police to interrogate all of the security agents close to Moise. These include security coordinator Jean Laguel Civil and Dimitri Herard, head of the General Security Unit of the National Palace.

Joseph assumed leadership as interim prime minister with the backing of police and the military, and declared a two-week "state of siege." Port-au-Prince already had been on edge amid the growing power of gangs that displaced more than 14,700 people last month alone as they torched and ransacked homes in a fight over territory.

The killing brought the usually bustling capital to a standstill, but Joseph urged the public to return to work. The international airport, street markets, supermarkets, banks and gas stations reopened Friday, and people lined up to buy fuel.

Vargas has pledged Colombia's full cooperation, and authorities there identified 13 of the 15 Colombians implicated in the attack as retired members of the military, 11 of them captured and two killed. They ranged in rank from lieutenant colonel to soldier.

The commander of Colombia's armed forces, Gen. Luis Fernando Navarro, said they had left the military between 2018 and 2020.

"In the criminal world, there is the concept of murder for hire, and this is what happened: They hired some members of the (army) reserve for this purpose and they have to respond criminally for the acts they committed," said retired Colombian army Gen. Jaime Ruiz Barrera.

Senior officials from Colombia's security forces will travel to Haiti to help with the investigation.

U.S.-trained Colombian soldiers are heavily recruited by private security firms in global conflict zones because of their experience in a decades-long war against leftist rebels and powerful drug cartels.

"The most important new fact is that apparently the mercenaries were not supposed to kill the president, but arrest him. Why? And who paid them remains an enigma," Robert Fatton, a professor of government and foreign affairs at the University of Virginia who has written extensively on Haiti, said in an email. "Now whether the mercenaries are lying to the Haitian police is another question."

The wife of one former Colombian soldier in custody said he was recruited by a security firm to travel to the Dominican Republic last month.

The woman, who identified herself only as "Yuli," told Colombia's W Radio that her husband, Francisco Uribe, was hired for $2,700 a month by a company named CTU to travel to the Dominican Republic, where he was told he would provide protection to some powerful families. She said she last spoke to him at 10 p.m. Wednesday and he was on guard duty at a house where he and others were staying.

"The next day he wrote me a message that sounded like a farewell," the woman said. "They were running, they had been attacked. ... That was the last contact I had."

The woman said she knew little about her husband's activities and was unaware he had even gone to Haiti.

Uribe is already under investigation for his alleged role in extrajudicial killings by Colombia's U.S.-trained army more than a decade ago.

The CTU in question may be CTU Security. The business has two listed addresses on its website. One is a shuttered warehouse with no sign indicating who it belongs to. The other is a simple office under a different company's name where the receptionist said the CTU owner comes once a week and holds occasional meetings.

The U.S. State Department said it was aware of reports that Haitian-Americans were in custody, but it would not comment.

Solages, 35, described himself as a "certified diplomatic agent," an advocate for children and a budding politician on a now-removed website for a charity he started in 2019 in south Florida to assist residents of his hometown of Jacmel, on Haiti's southern coast.

Solages also said he had worked as a bodyguard at the Canadian Embassy in Haiti, and on his Facebook page, which was also taken down after news of his arrest, he showcased photos of armored military vehicles and a shot of himself standing in front of an American flag.

Canada's foreign relation department released a statement that did not refer to Solages by name but said one of the men detained had been "briefly employed as a reserve bodyguard" at its embassy by a private contractor.

Calls to the charity and Solages' associates went unanswered. However, a relative in south Florida said Solages doesn't have any military training and family members have never known him to have radical political beliefs.

"I feel like my son killed my brother because I love my president and I love James Solages," Schubert Dorisme, whose wife is Solages' aunt, told WPLG-TV in Miami.

Taiwan's Embassy in Port-au-Prince said police had arrested 11 individuals who tried to break into the compound early Thursday. It gave no details of their identities or a reason for the break-in, but in a statement referred to the men as "mercenaries" and strongly condemned the "cruel and barbaric assassination" of Moise.

"As for whether the suspects were involved in the assassination of the president of Haiti, that will need to be investigated by the Haitian police," Foreign Affairs spokesperson Joanne Ou told The Associated Press in Taipei.

Haiti is one of a handful of countries with diplomatic relations with Taiwan.

Elsewhere in Port-au-Prince, witnesses said a crowd discovered two suspects hiding in bushes, and some people grabbed them. An AP journalist saw officers put them in the back of a pickup and drive away.

The crowd later set fire to abandoned cars riddled with bullets that they believed belonged to the suspects. The cars didn't have license plates, and inside one was an empty box of bullets.

Information for this article was contributed by Evens Sanon, Danica Coto, Joshua Goodman, Pierre-Richard Luxama and Johnson Lai of The Associated Press; and by Widlore Merancourt, Anthony Faiola, Rachel Pannett and Shawn Boburg of The Washington Post. 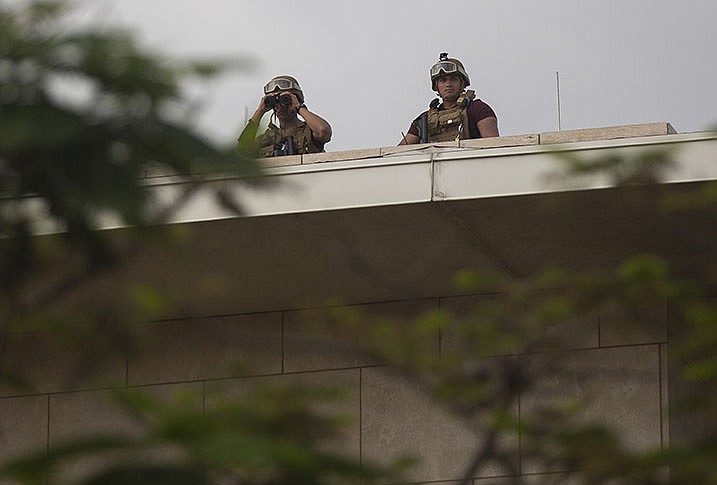 U.S. soldiers stand guard Friday on the roof of the U.S. Embassy in Port-au-Prince, Haiti, as a large crowd gathers outside. (AP/Joseph Odelyn) 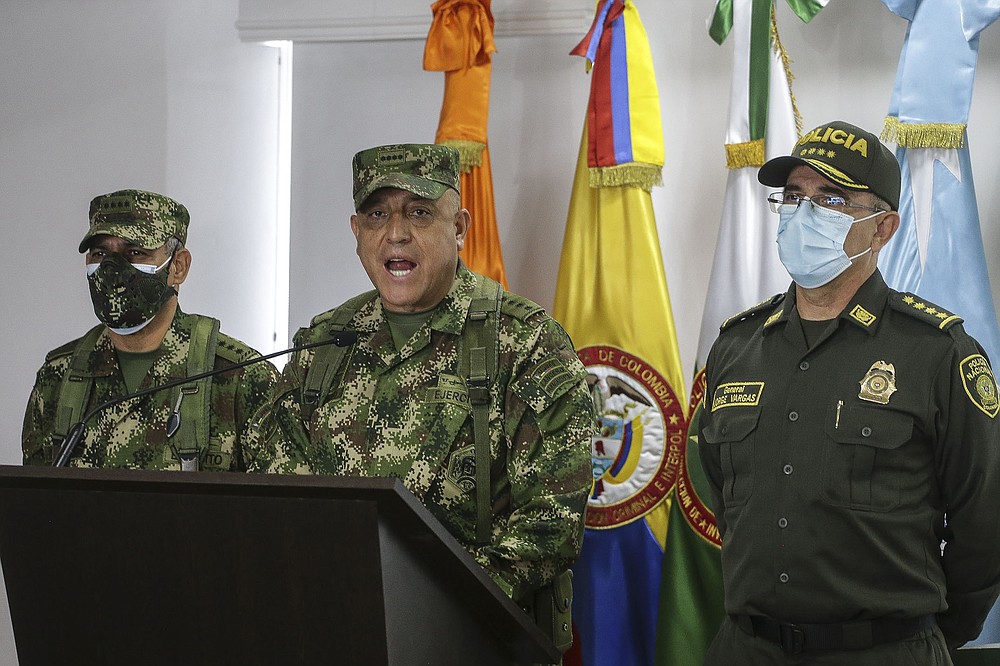 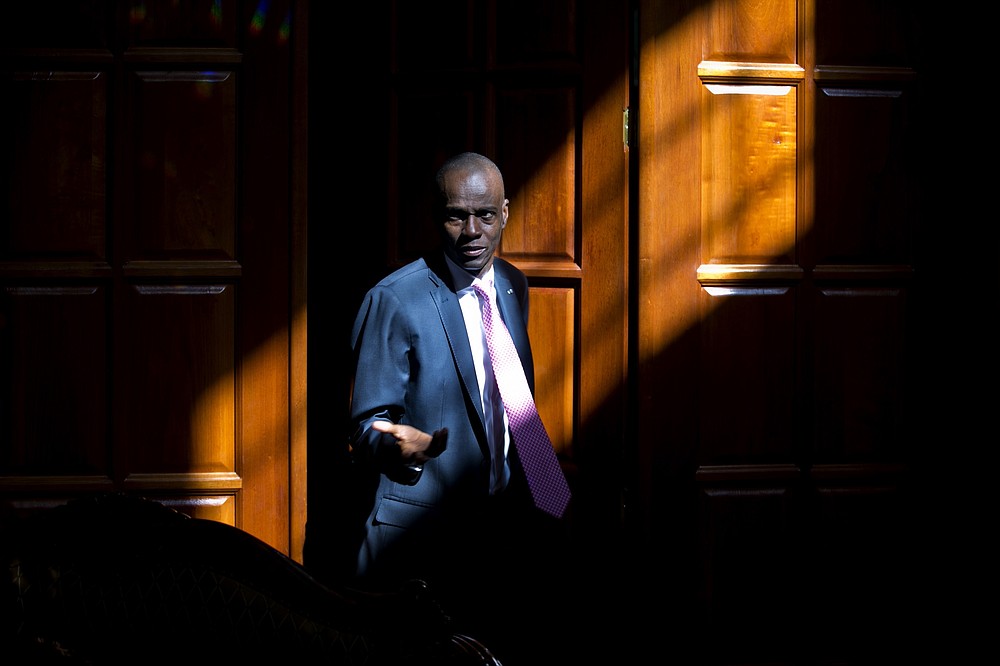 FILE - In this Feb. 7, 2020 file photo, Haitian President Jovenel Moise arrives for an interview at his home in Petion-Ville, a suburb of Port-au-Prince, Haiti. Moïse was assassinated in an attack on his private residence early Wednesday, July 7, 2021, and first lady Martine Moïse was shot in the overnight attack and hospitalized, according to a statement from the country’s interim prime minister. (AP Photo/Dieu Nalio Chery, File) 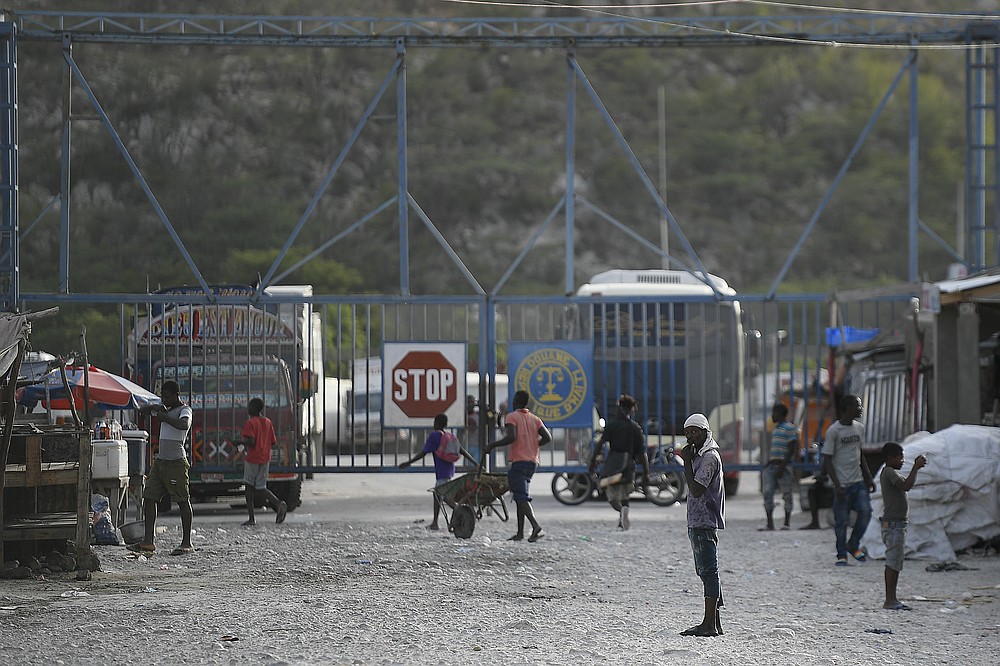 The entrance gate to Haiti is closed seen from Jimani, Dominican Republic, Thursday, July 8, 2021. Dominican President Luís Abinader ordered the closure of the border on Wednesday, after Haiti's government reported that a team of gunmen had assassinated President Jovenel Moïse. (AP Photo/Matias Delacroix) 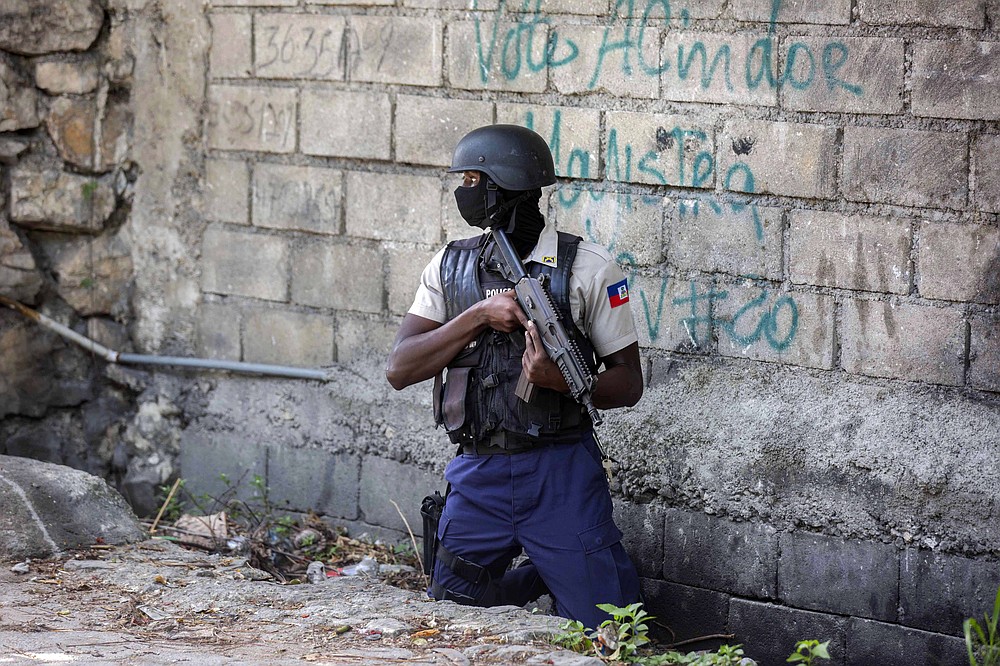 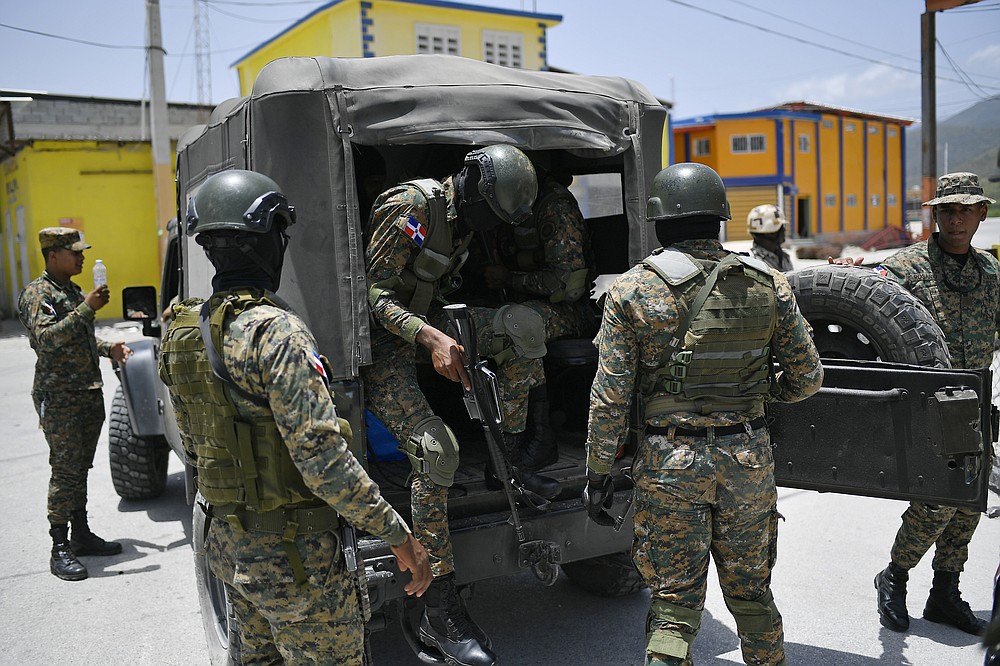 Soldiers arrive for a change of guard at the border with Haiti in Jimani, the Dominican Republic, Friday, July 9, 2021. Dominican President Luís Abinader ordered the closure of the border on Wednesday after Haiti's government reported gunmen had assassinated Haitian President Jovenel Moïse. (AP Photo/Matias Delacroix) 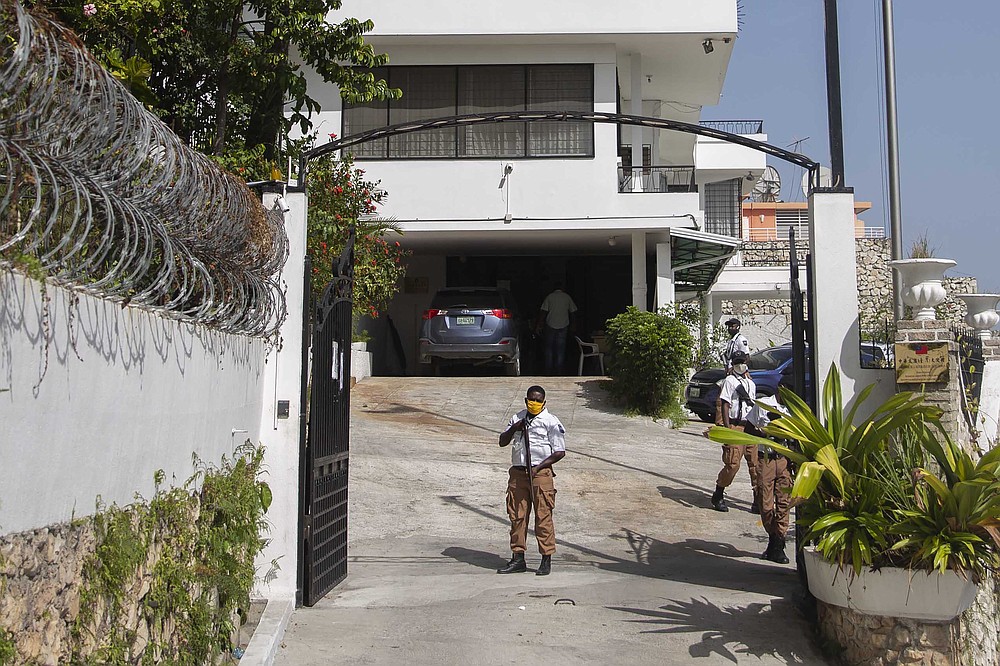 Security guards stand at the entrance to Taiwan's embassy the morning after a break-in, in Port-au-Prince, Haiti, Friday, July 9, 2021, two days after the Haitian president was assassinated. Taiwan's foreign ministry says Haitian police have arrested suspects who tried to break into its embassy but gave no details of the suspects' identities or a reason for the break-in. (AP Photo/Joseph Odelyn) 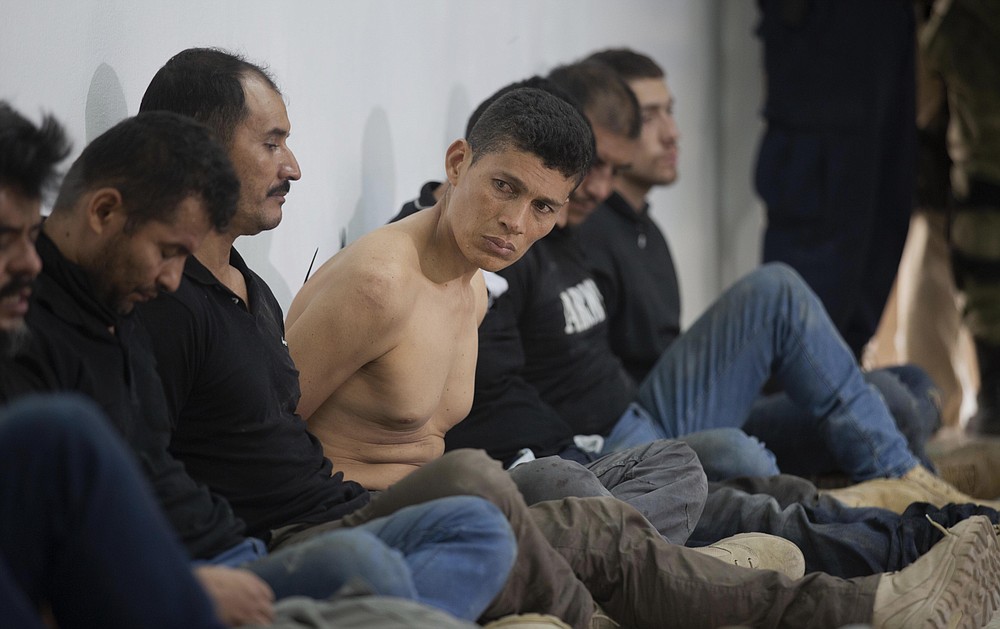 Suspects in the assassination of Haiti's President Jovenel Moise are displayed to the media at the General Direction of the police in Port-au-Prince, Haiti, Thursday, July 8, 2021. Moise was assassinated in an attack on his private residence early Wednesday. (AP Photo/Joseph Odelyn) 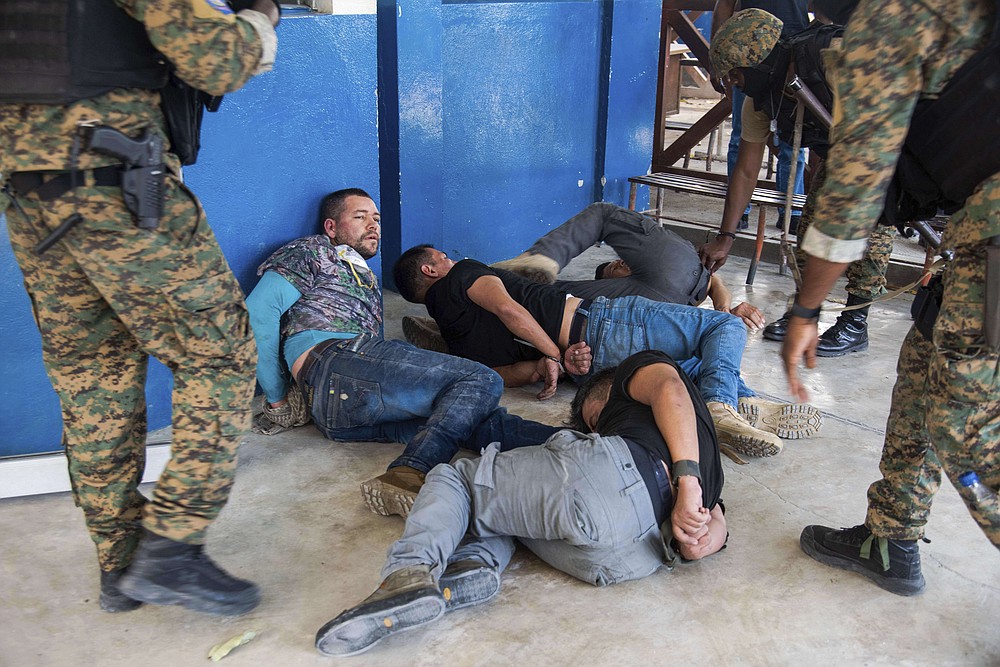 Suspects in the assassination of Haiti's President Jovenel Moise are tossed on the floor after being detained, at the General Direction of the police in Port-au-Prince, Haiti, Thursday, July 8, 2021. A Haitian judge involved in the murder investigation said that President Moise was shot a dozen times and his office and bedroom were ransacked.( AP Photo/Jean Marc Hervé Abélard)