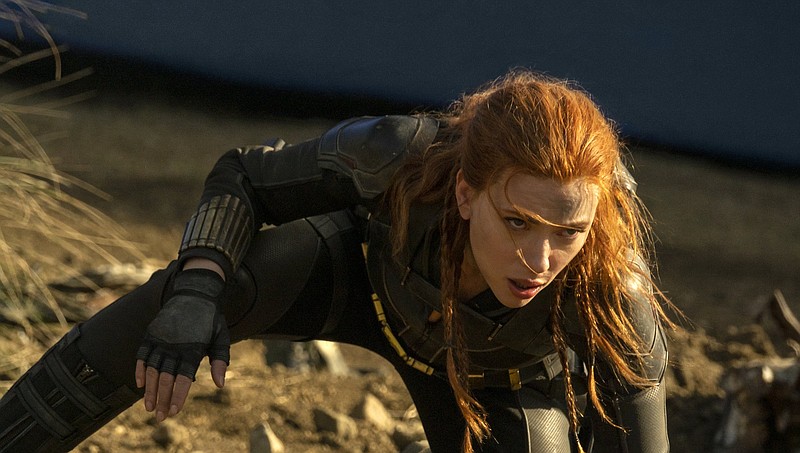 Natasha Romanoff, aka Black Widow (Scarlett Johansson) finally gets her own movie after showing up as a supporting character in seven movies over the past decade.

A key element in the character of Natasha Romanoff (Scarlett Johansson) as stated explicitly in "Avengers: Endgame" -- and a detail that made her even more endearing, as it happens -- was her deeply unrooted childhood. She never had a family of her own, she mentions wistfully, before the Avengers finally came around to take her in. It was that sense of purpose, of connection after so long on her own in the cold, that powered her drive to make things right after Thanos snapped half the universe out of existence, to the point where she sacrificed her own life for the team to fulfill their quest.

In Cate Shortland's energized action thriller "Black Widow" -- and the triumphant return of the MCU to the big screen after a two-year hiatus (this film was originally slated to be released last year in May, but covid-19 happened) -- set between the events of "Civil War"and "Infinity War," with the Widow on the run from the U.S. government for running afoul of the Sokovia Accords with Captain America, we get to find out a little more about that familial absence to which she was referring.

At first, as the film begins in 1985 Ohio, it actually seems as if Natasha is all set, living in a pleasant suburb with Mom, Melina (Rachel Weisz), pop, Alexei (David Harbour), and kid sister, Yelena (played as a kid by Violet McGraw). That is, right up until their cover is blown, and it's made clear they were living as a Soviet sleeper cell unit. Her family, then, was a construction -- in reality, she was given up to the Soviet government by her mother, who was shortly killed thereafter to close the loop.

Instead, arriving in Cuba after fleeing the United States, the family is just as quickly disassembled as it was hastily put together: Nat's "parents" watch as she and her sister are taken by General Dreykov (Ray Winstone) and put into the "Widow" program, trained to be highly-skilled assassins under the watchful eye of their willfully misogynist commander.

From there, the film jumps to Nat as an adult, having eluded the government agents of Gen. Thaddeus Ross (William Hurt), and hiding out in secluded Norway, with the help of a well-connected friend, Mason (O-T Fagbenle). That is, until she is attacked by a strangely armored special agent named Taskmaster (Jade Ma), apparently in search of some special chemical vials sent to the Widow by Yelena (Florence Pugh), now grown up and a world-class assassin herself.

It turns out these vials are filled with a chemical that negates the mind-controlling substance Dreykov has injected into the other Widows as part his nefarious program, which is still running, and now, as it is no longer attached to Soviet concerns, works as his personal assassin squad situated remotely in Russia.

Nat tracks down Yelena in Budapest -- the locale of a much-referenced disaster of an ops, and where Nat was finally freed from her Russian ties with help from Hawkeye (Jeremy Renner) some years before -- and the reunited pair of "sisters" determine they need to return to Russia to stop Dreykov and shut down the Widow program for good. To do so, they must first find their "father," Alexei, the former Soviet super-soldier known as Red Guardian (he fancies himself the ultimate adversary of Captain America, though the two had never met), long-since imprisoned in Siberia. Once he has been freed, they must then track down their "mother" Melina, to find the hidden organization and take their revenge.

There is no denying this is an MCU joint: The action sequences are varied, crisply presented, and plentiful (one highlight: A raging car chase in the streets of Budapest that involves cars, motorcycles, a tank, and, eventually, a subway platform) but, under the careful tutelage of Shortland, a talented filmmaker whose earlier work showed a penchant for taut storytelling and a careful eye for detail, there is a slightly different vibe to the production.

Perhaps it's the focus on the idea of family, especially between the wayward "sisters," who enjoy a spunky sort of antagonism before they begin to bond, or the plight of the other Widows themselves, taken away from their families, trained and drugged to be under the total command of a pompous, horrible dictator (the very idea of family made all the more poignant by virtue of Dreykov insisting all his Widows be made sterile -- a horrific detail that Shortland reveals in a darkly comic scene with Alexei horrified by the TMI subject matter -- which still resonates as another aspect of Nat's intrinsic loneliness) but the film has a definite feminist bent.

Of course, as devoted MCU fans must know, this is a posthumous affair for Natasha, who, along with the Vision and Tony Stark, were part of the cost of stopping Thanos. As always, it's a joy to watch Johansson in the role -- as with much of Marvel's brilliant casting (Sarah Finn!), it's impossible to imagine another actress hitting her combination of vulnerability and steely grit in the right proportion -- even as we are all too aware of this film being her posthumous swansong.

Curiously, her impending death isn't much touched on by Shortland, and screenwriter Eric Pearson, who prefer instead to give the Widow a chance to right some of her previous wrongs, and reunite with her first "family" without the burden of heart-breaking irony added into the mix. For a film inevitably steeped in this sort of audience pathos, it's hardly melancholy -- in fact, it goes out of its way to avoid the sorrowful stuff, in favor of fast-paced, quip-laden action throw downs.

Instead of dwelling on the loss of Nat, it smartly introduces us to Yelena, a spikier, less-weighed down sort of Widow -- in one of the film's frequent comic asides, Nat takes grief from her kid sis about her propensity for "superhero landings" that make it seem as if she's "posing" for everybody instead of just getting on with it -- who's nothing but a whirling dervish of hellacious fun (and whom we will most certainly be seeing again before too long, especially after a portentous post-credit sequence).

In fact, considering how long fans have been clamoring for a solo adventure from Natasha Romanoff, she remains frustratingly out of reach for much of the film, like an old friend at a party you never get to spend as much time with as you'd like. For much of the third act, Nat is another cog in the racing wheel of multi-pronged action segments Shortland throws at us. She might be the headliner, but the opening bands are given about as long of a set as her own.

In this way, the film has echoes of Cap in "Civil War," which played a similar game with its supposed primary protagonist, only here, we feel the weight of it a good deal more, as (barring a sequel) it's likely to be our last glimpse of Johansson in the role, one of the enduring highlights of the MCU, and another reminder of all that was taken by the events of "Endgame." Still, even if we aren't given obvious opportunities to grieve, exactly, we at least get a rousingly fun, action-packed fare-thee-well, which is, after all, exactly how the Widow would have wanted it.

Rating: PG-13, for intense sequences of violence/action, some language and thematic material

Playing theatrically and on Disney+