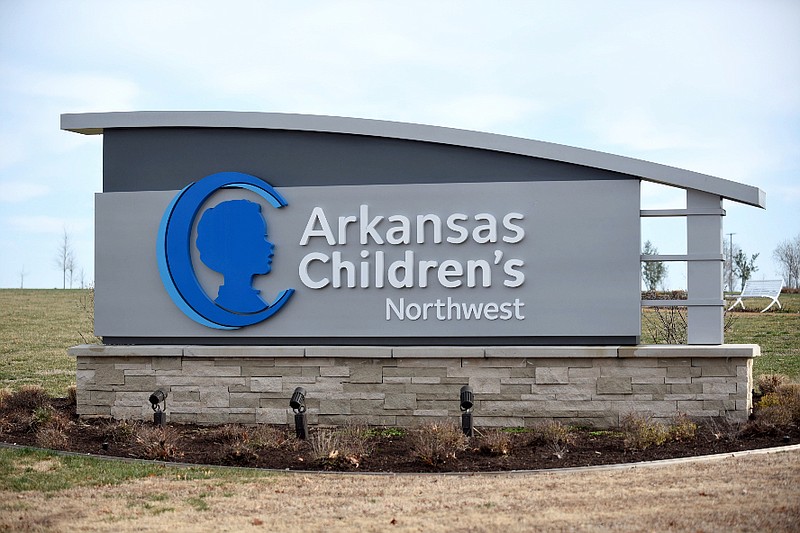 FILE -- The sign for Arkansas Children's Northwest in Springdale is visible in this March 3, 2020, file photo. (NWA Democrat-Gazette/David Gottschalk)

SPRINGDALE -- J.B. Hunt Transport Services will give Arkansas Children's Northwest $1 million annually for the next five years to support expansion at the hospital.

The new commitment of $5 million brings J.B. Hunt's overall investment in Arkansas Children's Northwest to $10 million, according to a joint press release. J.B. Hunt made a $5 million gift in 2016 to support construction of the facility.

"J.B. Hunt is proud to extend our support for Arkansas Children's as it continues advancing pediatric healthcare in this region," said John Roberts, president and chief executive of J.B. Hunt. "The hope that these extremely talented, driven professionals bring to our community is very special, and helping Arkansas Children's expand its services and capabilities will benefit the diverse needs of the Northwest Arkansas community."

Arkansas Children's Northwest has cared for more than 60,000 children since opening in 2018, according to Shannon Porter, a spokesperson for Children's. The hospital averages 2,569 surgeries; 2,208 inpatient admissions; 26,624 emergency department visits; and 38,627 outpatient visits annually.

"Over the next five years, Arkansas Children's Northwest will expand from a community hospital to an anchor pediatric institution. Arkansas Children's Northwest will strengthen its clinical care hub and expand its outreach arm," Porter said in an email. "Specific initiatives are aimed at maximizing capacity, increasing acuity level of care, formalizing research and education partnerships, expanding the physical plant, and recruiting and retaining a workforce that mirrors and meets the diverse needs of Northwest Arkansas."

Children's Northwest announced in December it added more staff, a pediatric sports medicine program for high school athletes and plans for more services. Among the new staff the hospital added a pediatric cardiologist and pediatric neurologist, giving the hospital two of each, according to Shannon Hendrix, the hospital's chief administrator.

Money already received from the fundraising has gone toward the hematology/oncology program, allowing the hospital to have its pharmacy open 24/7, according to Hendrix.

By most national measures, Arkansas is one of the least healthy states. Arkansas ranks 40th out of the 50 states in child health and well-being, according to Children's.

Ryan Cork, executive director of the Northwest Arkansas Council Health Care Transformation Division, said Hunt's gift will help efforts to make the region a place people will flock to for health care in the future.

Springdale Mayor Doug Sprouse said Hunt's gift is an example of the proactive role Hunt and other companies play in the region.

"This generous gift by J.B. Hunt Transport is another example of major corporations and families in Northwest Arkansas who continually invest in the quality of life for the residents of our region," Sprouse said. "This support not only adds to the quality of health care in our region, but also ensures future workforce opportunities and economic development in Springdale and Northwest Arkansas."

"This generous gift will make a tangible difference in the health of children in Northwest Arkansas and beyond," Rogers said. "Arkansas Children's Northwest, anchoring the Springdale Care Corridor, continues to excel in its commitment to advance pediatric health care in our region."

The Care Corridor is a four-mile stretch on I-49 that begins at Exit 69 and ends at Exit 73. In addition to Children's, it also includes Highlands Oncology Group, Willow Creek Women's Hospital, Mercy Emergency Department, Ozark Guidance, Northwest Health Arkansas Blue Cross and Blue Shield and the Center for Children's Health and Wellness.

The University of Arkansas for Medical Sciences is also expanding along the Care Corridor in Springdale.

The University of Arkansas System Board of Trustees Building and Grounds Committee on Wednesday approved buying 31.2 acres just south of Children's Northwest for $13.2 million. The land will be used as the site for a new orthopedic and sports medicine center.

In March the full board of trustees approved construction of a 185,000-square-foot facility, expected to cost about $85 million.

UA announced in March an agreement with UAMS to provide medical care to more than 465 Razorback athletes.

Before Wednesday's vote, Christina Clark, UAMS vice chancellor for institutional support services and chief operating officer, said they would be bringing more projects to the board at a future meeting, including additional leases in the Northwest Arkansas area for their research arm and their behavioral health clinical outreach.

Campaign for a Healthier Tomorrow

The campaign will officially close at noon Wednesday when Arkansas Children’s Foundation will announce the final campaign total. Watch the online celebration at archildrens.org/campaign .