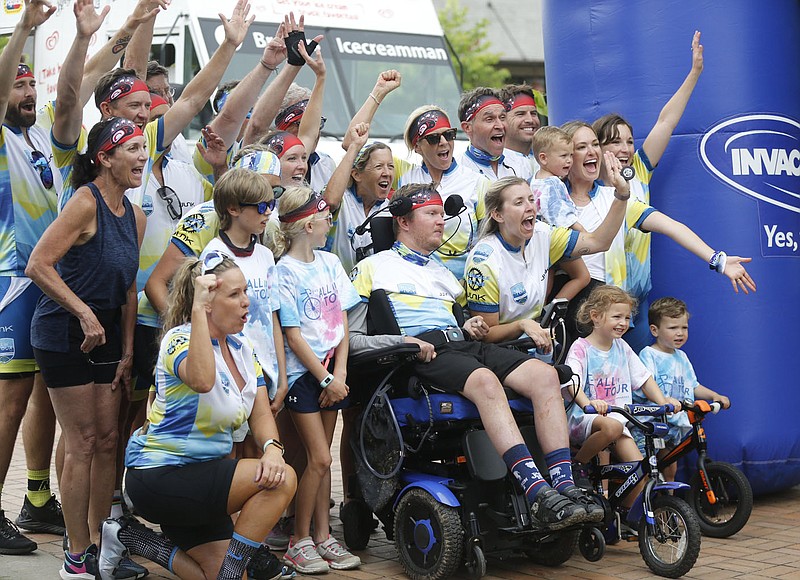 Josh Fohner poses with teammates, well wishers and friends Thursday, July 1, 2021, after arriving at Shiloh Square in downtown Springdale. Fohner, the inspiration behind the All In For Josh Ride, was finishing up a 908 mile bicycle ride that started in Buena Vista, CO. to Springdale. The Springdale native was seriously injured in a biking accident in 2016 and suffered severe brain injuries. Check out nwaonline.com/210702Daily/ and nwadg.com/photos for a photo gallery. (NWA Democrat-Gazette/David Gottschalk)

That friendship forged in the hot summer sun of peewee football practice has lasted a lifetime, but even Pruden never envisioned the sacrifice he would make for his buddy.

Pruden admits that he has not always been an avid cycler. But when the All In For Josh Tour ride was announced, he knew he needed to step up to meet the challenge -- in this case a 908-mile bike ride from Buena Vista, Colo., back to Springdale over a 21-day period.

"It has been an absolutely incredible opportunity with everything that we've done," says Pruden, whose father also participated in the ride. "From the day we found out that Josh was riding, and we started riding with him, it's been so inspiring to watch him and how he's come along. Before he got on the Yumi, he was having a hard time even pedaling at first, and he was having difficulty with making facial expressions and stuff, and now the guy smiles all the time whenever you crack a joke or something. He's always waving that foot of his. I'm just super proud of him and the whole crew and how they came together on this whole thing."

A large gathering of cyclists from across Northwest Arkansas and beyond gathered at the Bentonville square on July 1 to ride the final 30 miles of the tour. Most were dressed in matching cycling kits with the All In Tour logo and headbands from local business Junk Brands.

[Video not showing up above? Click here to watch » https://www.youtube.com/watch?v=rvsz7fvZjoE]

Matt Lamb with Bentonville-based Junk Brands, which manufactures custom headbands, says he was contacted by one of the ride organizers to gauge the company's interest in joining Team Josh. Lamb says the company jumped at the opportunity and has since become one of the major sponsors with 100 percent of the funds generated by the sale of the special All In Tour headbands going to the Fohner family.

"Bret McCormick reached out to us and told us about Josh," says Lamb. "We watched the story and learned a little about him and said yes, we definitely wanted to do something. So we found a way to incorporate the headbands into it, which worked really well for cycling under the helmet anyway. So we just wanted to help any way possible. We also did the All In Tour jerseys for that group of riders.

"This was a really great experience."

More than a year ago, Josh's father Mike came up with the idea of the ride. It would be a way, he thought, to help raise funds for Josh's continued rehabilitation and transportation needs as he continues the long recovery from a horrific cycling accident on Sept. 27, 2016. Josh suffered traumatic brain and other physical injuries in the crash. The purpose of the All In Tour was to raise funds for continued physical therapy and to purchase a special vehicle to aid in his transportation. According to the All In For Josh web page, the family has raised more than $90,000 of its $145,000 goal.

When Mike told his family about the idea, Josh said he wanted to be there for the ride, all 908 miles of it. Josh uses a device similar to one used by ALS patients to communicate. At first Mike just kind of laughed at the thought of Josh being physically able to undertake such a challenging ride. Then he realized the same mental toughness and drive that made Josh an all-state football player at Springdale Har-Ber High did not die in the 2016 accident. His family will say it burns even brighter today.

"The whole time, I was like, are we really doing this," Fohner marveled as a throng of friends from all across the region showed up on the Bentonville square to support Josh's mission. "And as we rolled into the square today and people started cheering us, it was like, we did it. So it's exciting. Josh was beaming ... he was beaming."

The Fohners -- and a strong biking community led by the Springdale Bike Club -- began training rides back in January to build Josh's strength and endurance to be able to ride the 50-plus miles a day it would take to complete the journey. The bike that Josh needed was a specially built Army green Yumi. Even though Josh is a Navy veteran, he was OK with the color as long as his cycling helmet was Navy blue.

From rides around Lake Fayetteville to a simulated longer trip, Josh continued to show remarkable progress in his ability to pedal the Yumi, says Travis Kegans, who spent many hours sitting next to Josh in the Yumi.

The All In Tour pushed off early on the morning of June 11 from the site of the 2016 accident. Over the next 21 days, they pedaled through Colorado, Kansas, Missouri and back into Arkansas following the Trans America Trail. Most overnight stays were in tents, and the group was often treated to meals prepared by the townspeople of the communities they visited.

"We met so many people along the way that we will always remember," says Kelly Fohner, Josh's mom. "Just watching the way those people, who were perfect strangers, served Josh, was incredible. This is the greatest blessing for me that I can ever witness.

"It's not unbelievable that he did this, but it has been an incredible trip. You know with Josh, he just never quits. When he sees a challenge, like when he was a football player or whatever, he's always going to meet that challenge 100 percent."

Hannah Hamill rode the entire 21-day journey as well as most of the training rides leading up to the actual ride.

A relative newcomer to cycling when she joined the training rides with the Springdale Bike Club, she became emotional when talking about the impact this ride will have on her.

"Now you're getting the tears starting," she laughs, then pauses for composure. "I came on board for this just hoping to make some friends. And I met Josh, and the rest is history. He's just got this aura about him, he draws people in. And you just can't stay away from him. Once I got to know him, I said I can't let him go on this journey by himself. I've got to be there. I knew I'd have some serious FOMO (fear of missing out) if I wasn't there.

"I asked God for one friend and He's given me a whole community."

McCormick was a main driving force in helping put together the logistics of the ride in addition to his many hours on the training rides. Although McCormick lives in Vernon, Texas, and is the publisher of the daily newspaper there, he's also an active cyclist in the Northwest Arkansas cycling community.

"I met Josh in December," says McCormick, "and when he asked me if I would ride with him, I couldn't say no. I knew I had to be part of this, if for nothing else because Josh wanted me to be part of it."

The Ride For Hope ended at Turnbow Park in downtown Springdale with live music, a zesty barbecue lunch and hundreds of well-wishers celebrating the end of an incredible journey by a hometown hero.

"This is the experience of a lifetime," says Kegans. "Josh's saying with he and I is to go big or go home. We like to go big. I've never met a person with more will than Josh has."

As the many people who came in support patted Josh on the shoulder, gave him words of encouragement or a fist bump, Mike put the journey and Josh's never-ending determination into perspective.

"People need to know ... there were all kinds of riders, but only one person did the entire trip," Mike says. "Everyone else rotated in and out to do whatever it took. Only Josh did the whole thing. He sat on that tail and cranked those chains, every pedal stroke." 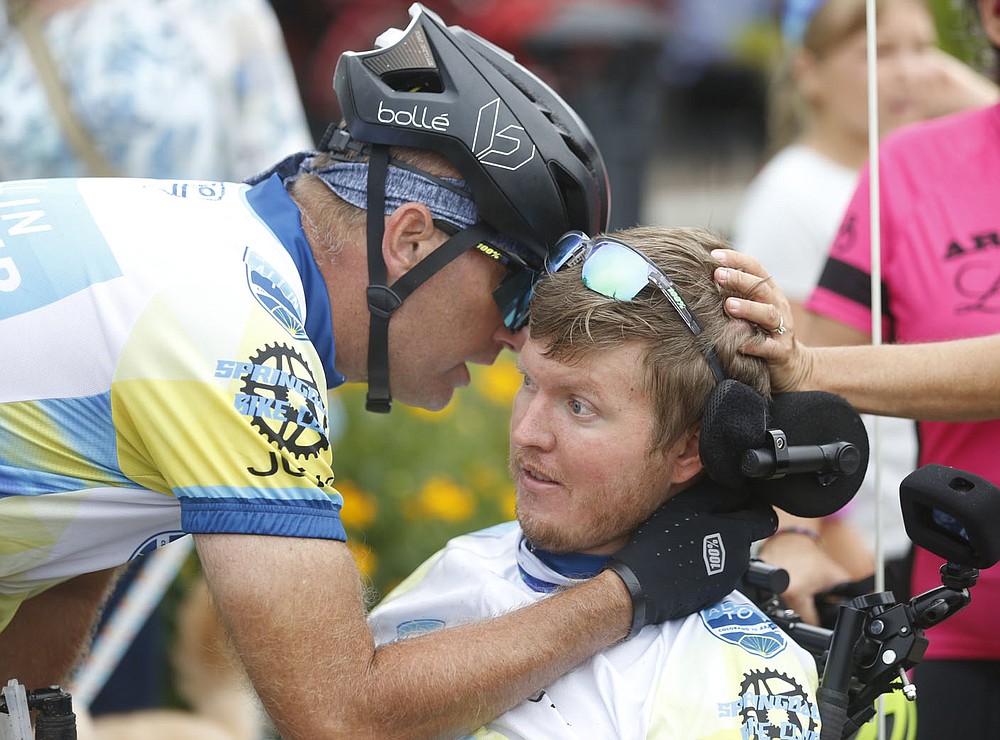 Josh Fohner is surrounded by teammates, well wishers and friends Thursday, July 1, 2021, after arriving at Shiloh Square in downtown Springdale. Fohner, the inspiration behind the All In For Josh Ride, was finishing up a 908 mile bicycle ride that started in Buena Vista, CO. to Springdale. The Springdale native was seriously injured in a biking accident in 2016 and suffered severe brain injuries. Check out nwaonline.com/210702Daily/ and nwadg.com/photos for a photo gallery.(NWA Democrat-Gazette/David Gottschalk) 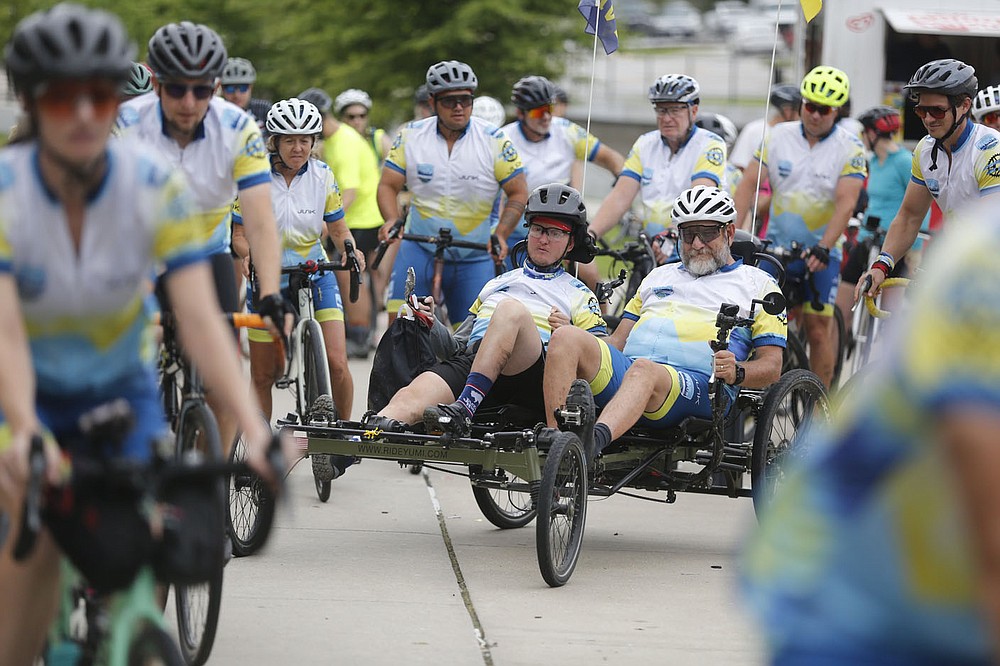 Josh Fohner leaves Shiloh Square with his father Mike Thursday, July 1, 2021, and teammates, friends and well wishers en route to Lewis and Clark Outfitters in Springdale. Fohner, the inspiration behind the All In For Josh Ride, was finishing up a 908 mile bicycle ride that started in Buena Vista, CO. to Springdale. The Springdale native was seriously injured in a biking accident in 2016 and suffered severe brain injuries. Check out nwaonline.com/210702Daily/ and nwadg.com/photos for a photo gallery.(NWA Democrat-Gazette/David Gottschalk) 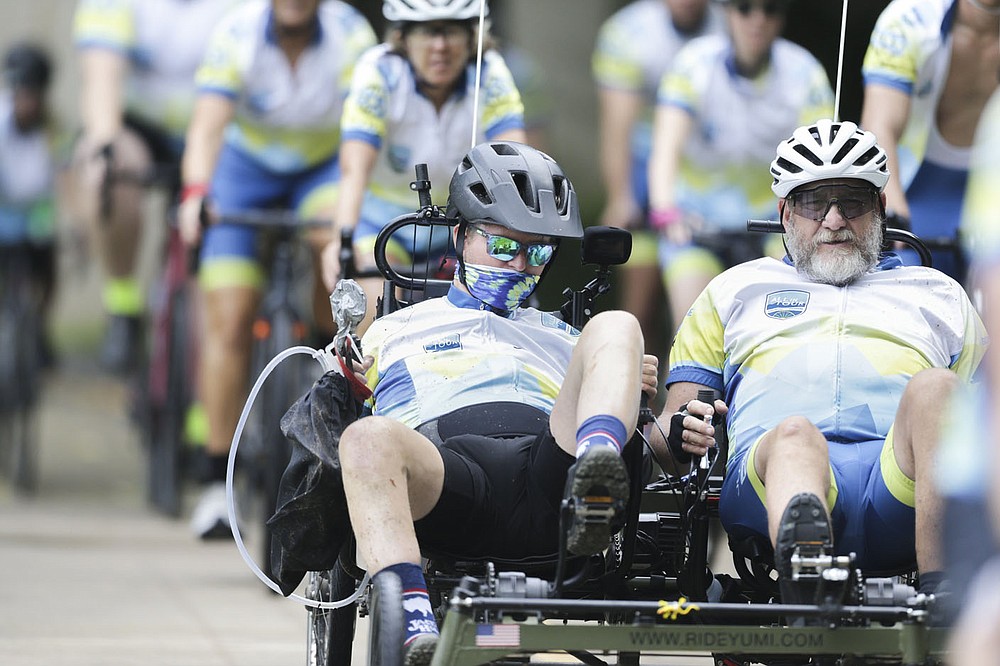 Josh Fohner (from left) and his father Mike Fohner ride, Thursday, July 1, 2021 along the greenway through the Horsebarn trailhead in Rogers. The All in for Josh ride ended its 908-mile journey with the Ride for Hope from Bentonville to Springdale. The ride started in Buena Vista, Colo. in June and finishes in Springdale at Lewis and Clark. Josh Fohner is a Springdale native who was seriously injured in a biking accident in 2016 and suffered severe brain injuries. This ride is a fundraiser for the Fohner family to continue Josh's rehabilitation efforts. Check out nwaonline.com/210702Daily/ for today's photo gallery. (NWA Democrat-Gazette/Charlie Kaijo) 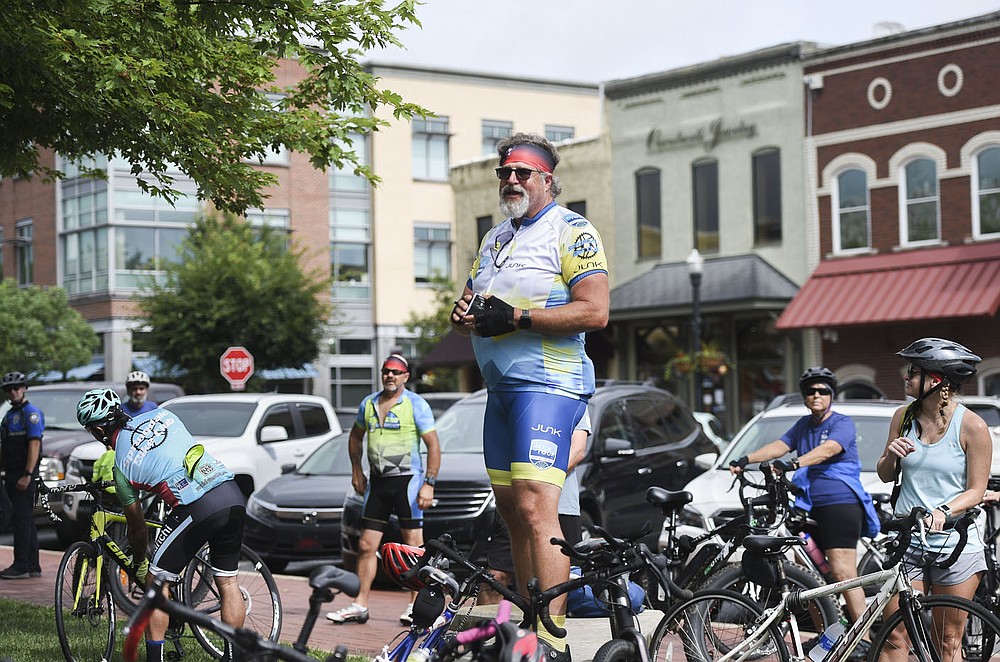 Brett McCormick organizes participants for a ride, Thursday, July 1, 2021 at the downtown square in Bentonville. The All in for Josh ride ended its 908-mile journey with the Ride for Hope from Bentonville to Springdale. The ride started in Buena Vista, Colo. in June and finishes in Springdale at Lewis and Clark. Josh Fohner is a Springdale native who was seriously injured in a biking accident in 2016 and suffered severe brain injuries. This ride is a fundraiser for the Fohner family to continue Josh's rehabilitation efforts. Check out nwaonline.com/210702Daily/ for today's photo gallery. (NWA Democrat-Gazette/Charlie Kaijo)
More News

To find out more about Josh Fohner and his continued recovery from a 2016 biking accident, visit allinforjosh.org.

To help with the fund-raising effort and to purchase a special All In Tour headband from Junk Brands, visit junkbrands.com/pages/josh-fohner.