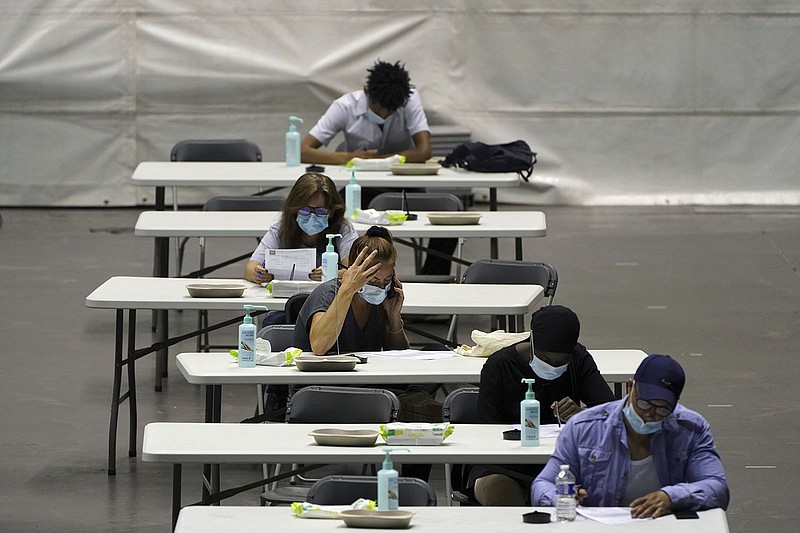 People fill out forms to get the Pfizer vaccine Wednesday at a vaccination center in Lyon in central France. Warnings of a fourth wave by Health Minister Olivier Veran have jolted more people into getting the shots. (AP/Laurent Cipriani)

Germany's health minister stepped up his plea for as many people as possible to get a covid-19 shot after signs the vaccination drive across Europe is losing steam.

Jens Spahn made the call Wednesday as the spread of the delta variant threatens to spark a new wave of virus infections throughout the European Union. There are signs that other countries, including France, Italy, Switzerland and Austria, are struggling to maintain the pace of shots.

The slowdown suggests a growing risk that developed countries, including the U.S., could fall short of the vaccination rates needed to achieve herd immunity. The situation is being made worse because the delta strain is more transmissable than previous versions of the coronavirus.

Daily case rates are already at the highest in five months in the U.K. There's also been a sharp pickup in countries including Spain and Portugal, and governments across the EU have stepped up warnings about delta as well as the need to get inoculated.

"The virus can kill you, the vaccine is there to save you, so don't hesitate," Jean-Baptiste Lemoyne, France's junior minister for tourism, said on Franceinfo radio Wednesday.

In Germany, the rollout of shots -- which accelerated rapidly after a sluggish start -- appears to be starting to flag. Since May, it had been administering more than a million on several days each week, but last week only managed that on Wednesday.

Spahn said as well as inoculating people in dedicated centers, doctors' offices and at work, Germany must make vaccines more easily available in places like public markets and sports clubs.

"Maybe we could have a 'vaccination weekend' for Germany to really reach everybody, and then we will achieve a high rate," he said on DLF radio.

In France, authorities have been raising the alarm about the delta variant for the past two weeks, with Health Minister Olivier Veran warning that a fourth wave could hit France as soon as the end of July.

The alarm jolted people into getting vaccinated after the rate dropped in recent weeks, and the government is also considering mandatory shots for health care workers.

Italy's covid emergency czar, Francesco Paolo Figliuolo, said Tuesday that the country needs to step up efforts to encourage people in their 50s, particularly teachers, to get vaccinated.

Portugal also has been trying to accelerate its inoculation campaign after reporting rising covid cases during June.

"We have a fight against time, between the capacity of the virus to differentiate itself and our capacity to vaccinate," Prime Minister Antonio Costa said Tuesday.

In Austria, the Vienna city council is offering walk-in vaccinations this week and targeting younger people with inoculations at live music events. The number of first vaccine doses administered each week across the nation has fallen to less than half the peak pace in May.

"Whoever is not vaccinated this fall and winter will very likely get infected," Spahn said in a separate interview with ARD television. "If Germany and Europe want to get out of this pandemic, we need a high rate of vaccination."

In South Africa, widespread vaccine hesitancy has kept people from getting the shots, despite one of the world's highest death rates from the virus.

Deaths from the virus in the country rose 72% week on week as of Monday, according to data compiled by Bloomberg, the fifth-fastest worldwide and behind only Zimbabwe on the continent. Yet a lack of communication coupled with anti-vaccine propaganda may be responsible for daily doses languishing almost 50% below President Cyril Ramaphosa's target, health experts have warned.

"There is definitely vaccine hesitancy," said Vicky Baillie, senior researcher at the Wits Vaccines and Infectious Diseases Analytics unit, which ran local trials for the AstraZeneca Plc and Novavax Inc. candidates. "I've spoken to a lot of people who just don't understand the information that's available, but if you talk them through the information they 100% come around."

South Africa's vaccine program has suffered numerous setbacks, of which wariness among the over-60 priority group is just one. The government was slow to place orders when other countries were stocking up last year, opted not to use the AstraZeneca candidate following adverse trial results, while deliveries from Johnson & Johnson were delayed after a manufacturing glitch.

Public vaccine sites also remain largely closed at the weekend, drawing widespread criticism, and just over 3.6 million doses have been administered to a population of about 60 million. The daily figure was almost 165,000 on Tuesday, compared with what Ramaphosa has said is a target of 300,000.

"I think what makes me afraid to take the vaccine, is that at this age, no doctor has ever said to me that I was sick," Dullice Peterson, 93, said by phone from the southern Johannesburg district of Eldorado Park. "What's scary about the vaccine is that you don't know what it is and what it's made of."

More information could help her decide, she said, adding that word of mouth was currently a chief source of knowledge.

As in many other parts of the world, a prominent driver of vaccine hesitancy is social media messaging saying the doses are not safe or don't work, Ramaphosa said in an address to the nation on June 27. "Please consider the harm you may be causing," he said, urging people to "think long and hard before you press share or send."

Yet the government -- and the president himself -- could be working a lot harder to communicate the efficacy of the double-dose Pfizer Inc. and single-shot Johnson & Johnson versions currently being used, according to Jeffrey Mphahlele, vice president for research at the South African Medical Research Council.

"I don't feel the communication from government is coming out strong -- I would like to hear more voices," he said. Ramaphosa "should seize the moment every time he is in public to really emphasize the importance of vaccination."

Still, there are signs the country's roll out could accelerate from this point -- even if it's largely too late to address the ongoing third wave. Over-50s became eligible this week, and news reports showed long queues at sites in Johannesburg despite cold winter temperatures.

Most public vaccine sites now accept registered walk-ins, having dropped an earlier system that asked for people to wait for an appointment, while about 4.5 million delivered doses have yet to be administered.

Information for this article was contributed by Monique Vanek and Leah Wilson of Bloomberg News.