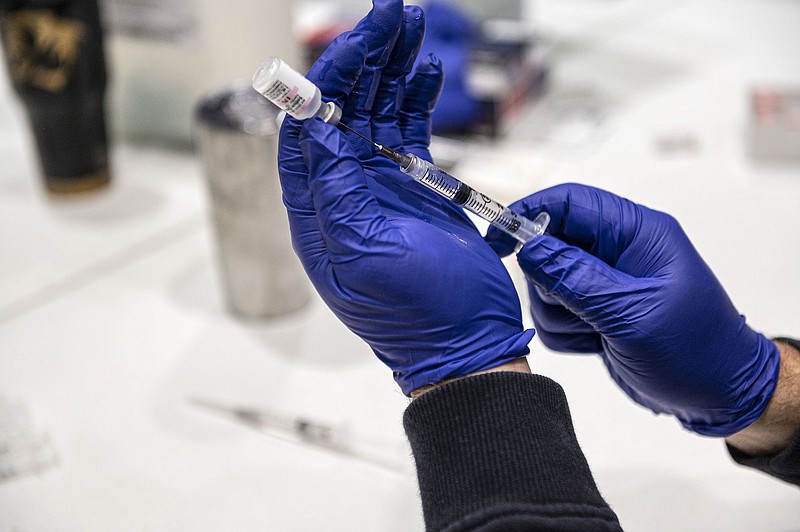 Tony Johnson a paramedic with the Bentonville Fire Department fills syringes with Pfizer Covid-19 vaccines Thursday March 19, 2021 along with other Bentonville Fire Fighters at Station No. 1 where the city was give out vaccinations.. (NWA Democrat-Gazette/Spencer Tirey)

Northwest Arkansas residents cited questions about safety, side effects and how rapidly vaccines were developed as their top concerns and reasons for refusing the covid-19 vaccine, according to a recent poll.

The poll is part of research commissioned by the Northwest Arkansas Council Heath Care Transformation Division in partnership with Benton and Sebastian counties. The three entities hired inVeritas, a national research firm based in Arkansas, to conduct the quantitative and qualitative research, with each paying $25,000 toward the $75,000 cost.

Washington County residents were included in the research although the county government did not participate in the project, said Ryan Cork, executive director of the Northwest Arkansas Council Health Care Transformation Division.

Data from the study will be used to inform communication plans and outreach, and ultimately to get more people vaccinated, Cork said.

Researchers conducted a telephone poll in May with 750 interviews, an online poll with 2,000 responses and two, two-hour online focus groups to find out why people in the three counties are hesitant to get the covid-19 vaccine, according to a memo from Cork and Nate Green, council communications director.

Statewide, 48% were partially or fully vaccinated. Nationally, 54.7% of the population has had at least one vaccine, the federal Centers for Disease Control and Prevention reported Friday.

The research project came about after officials began noticing fewer people participating in mass vaccine clinics, hosted by the council and its partners, in comparison to the percentage of the population that was still unvaccinated, according to Cork.

The research was conducted to better understand why people weren't turning out anymore, including their reasons and barriers to getting vaccinated, he said.

Benton and Sebastian counties participated in the research for similar reasons.

The council approached Benton County about participating in the research in April, around the time county officials noticed fewer people showing up for vaccination clinics the county was hosting with local health care providers and Collier Drug Store, according to Benton County Judge Barry Moehring. The research confirmed people in Northwest Arkansas are hesitant to get the vaccine for reasons similar to those reported nationally, he said.

"Part of solving a public health dilemma is understanding as much as possible about it, as well as public attitudes and reactions. That's a good part of what the survey is about," Moehring said.

Sebastian County officials also wanted to find out why vaccination rates were low in the county and the region, and see if there were ways to convince people through a media campaign or some form of notification to get vaccinated, said Jeff Turner, county administrator.

The telephone survey found residents of Benton and Washington counties were more likely to report having been partially or fully vaccinated than residents of Sebastian County. Residents 60 and older were more likely to have been vaccinated than younger residents, in part because of restrictions in place prior to the poll, the memo states. Gov. Asa Hutchinson extended eligibility for covid-19 vaccines to all residents age 16 and older on March 30.

The survey found little variation by gender or race/ethnicity in the reported vaccination rates.

Of those who had been vaccinated, 29% listed transmitting covid to others if they did not get the vaccine as their single biggest concern; 18% said catching covid was their biggest concern, while another 14% said it was experiencing side effects.

Among those not vaccinated, 67% mentioned concerns about the vaccine, according to the memo. Major concerns among the unvaccinated included safety (62%), side effects (54%) and the quick development and testing of the vaccine (51%).

Other concerns among the unvaccinated included the government's role in the process, with 56% listing it as a concern, including 35% who said it was a major concern, the memo states.

The effectiveness of the vaccine in preventing covid (53% total, 30% major concern), the role of stem cells (51% total, 29% major) and moral questions about the vaccine (39% total, 16% major) were also mentioned, along with whether being vaccinated is necessary because others will be vaccinated.

Donna Adams, 53, of Siloam Springs, who didn't participate in the research, said she is not going to get a covid-19 vaccine at this time. Adams has concerns about the speed with which the vaccines were tested and the side effects she has seen her friends and coworkers experience from them.

While Adams is diabetic, she said her overall health is good. She prefers to use all-natural products and homeopathic treatments, and generally avoids medication other than for her diabetes, she said.

Adams is concerned about catching covid. She regularly washes her hands and wears a mask in high-risk settings. She said she may change her mind about the vaccine later, although she doesn't think it's likely.

She wasn't aware of the state's vaccine incentives -- a $20 lottery ticket or tw0 $10.50 Arkansas Game and Fish Commission gift certificates -- but they made little difference to her, she said.

Factors such as catching covid and having a bad experience, or travel restrictions that could prevent her from visiting her children and grandchildren in California would have more influence, she said.

Whether or not people choose to get the vaccine, Adams said she would like to see them be more respectful and understanding of others' choices.

Adams' concerns echo those of participants in the researchers' focus groups who overall felt the risk of not being vaccinated was equal to or less than the risk associated with taking a vaccine created so quickly, according to the memo.

Dr. Marti Sharkey, Fayetteville's public health officer, explained the vaccine was developed quickly because every vaccine scientist in the world was concentrating on it at once.

There was plenty of money. Bureaucratic obstacles were removed. And there were volunteers willing to take the vaccine, Sharkey said.

The Food and Drug Administration's Institutional Review Board normally takes six months to review an application for a new vaccine, she said. It would take three more months for the creators to get in front of the board, and then the board would discuss the application for another three months before granting approval.

"All those delays were gone," she said.

Phase two trials studying efficacy and phase three trials studying side effects were done at overlapping times instead of sequentially, Sharkey said. Normally, when a vaccine trial is done, half the participants are given a placebo and the other half are given the vaccine, then scientists must wait until there are enough cases to prove it worked, she said. Doing a vaccine study on meningitis takes forever, but during a pandemic, scientists didn't have to wait long to see enough covid cases, she said.

"Once we had the data, every data scientist in the world crunched it all at once, so instead of two people looking at it six months mulling it over, we had 500 people looking at it for three weeks," Sharkey said. "The time, energy and resources were there. No steps were skipped."

Billions of doses of vaccine, more than almost any other vaccine ever, have been administered since the trials began a year ago, Sharkey said.

"We've given a lot of vaccine to a lot of people and shown it's very safe and very effective," Sharkey said.

Cam Patterson, chancellor of the University of Arkansas for Medical Sciences, said at the governor's news conference Tuesday that for those worried about vaccine side effects, the state has more than 300 patients hospitalized with covid-19 but zero patients with complications from the vaccine.

Officials will take what they learned from the study and apply it to communication strategies directed at those hesitating to get the vaccine, Cork said.

The council recommends a six-month, fully integrated communication strategy starting this month with the goal of educating the public about the safety and importance of vaccinations, and convincing everyone in Northwest Arkansas to get vaccinated, it states. The campaign would be an extension of the Safe and Strong service announcement developed by the council in partnership with the Northwest Arkansas health care community and launched this year, the memo states.

Encouraging more people to get vaccinated is both a public and private health issue, Moehring said. The more people who are vaccinated, the higher degree of herd immunity will be reached, which alleviates pressure on hospitals and schools, he said.

Among Northwest Arkansas residents who were vaccinated as of May — the time the poll was taken — these are the most common concerns they had before receiving their vaccine:

• Catching covid without the vaccine (78% total, including 60% major concern)

• Giving covid to family or others (75% total, including 58% major concern)

• Speed of development and testing of the vaccine (50% total, 24% major concern)

• Whether the vaccine would really work and protect them from covid (50% total, 24% major concern)

• Whether getting the vaccine was necessary given the possibility of herd immunity (41% total, 19% major concern)

• Whether it was appropriate to get a vaccine that might have been developed with stem cells (31% total, 11% major concern)