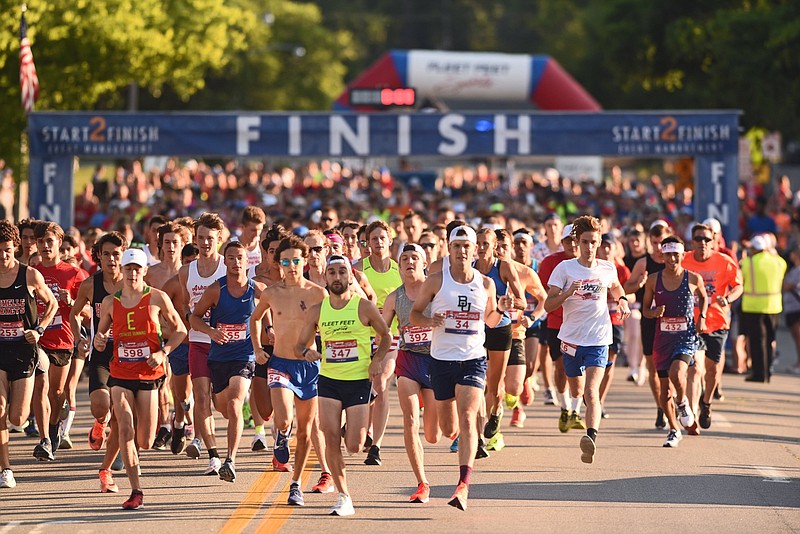 Participants in the Firecracker 5K take off from the starting line on S. Monroe Street on Sunday, July 4, 2021 in Little Rock. See more photos at arkansasonline.com/75firecracker5k/..(Arkansas Democrat-Gazette/Staci Vandagriff)

The Firecracker Fast 5K was a clash of friendly college rivals in the race through rare, comfortable weather on the Fourth of July in Little Rock.

As a total of 773 eventual finishers approached the start, new as part of the race course's first significant adjustment since 1988, the temperature stood at 63 degrees, atypical for a race more often run through heat indexes in the mid-80s. Many volunteers wore long sleeves. Several dressed in sweaters. The eventual women's winner warmed up in a sweatshirt for the coolest Firecracker since 2004, when it was 62 with light rain.

The former downhill, point-to-point course, from the Heights neighborhood to War Memorial Stadium, was changed to out and back with covid-19 restrictions in place. Downhill sections were balanced with long, challenging ascents, and Thomas Cain, a 21-year-old University of Central Arkansas sophomore from Yuma, Ariz., mastered them best to win in 15:19.9 on Sunday.

The race began and ended between War Memorial Stadium and the University of Arkansas for Medical Sciences campus on Monroe Street.

"I definitely enjoyed the weather," said Woodward, who completed her track and field and cross country eligibility for UCA in May. "It was a breath of fresh air because we were kind of expecting it to be blazing hot with a lot of humidity. I got up this morning and said, 'I can do this. I can run in this.' "

The race began in the opposite direction of the finish stretch from 1988-2019. Once the field turned northwest onto the steep downhill of Zoo Drive., Cain and Whaley took command. They passed the first-mile split, uphill on Van Buren Street in 4:57, about eight seconds ahead of Pascoe.

"They took out early," Pascoe said. "I was kind of looking for a relaxed start."

Cain and Whaley were aware of Pascoe's talent. Pascoe won the last Firecracker, run in 2019 before the race was idled by pandemic restrictions last year. He ran a 3,000-meter steeplechase in 8:31.72 on June 9 -- the world's 108th fastest time this season -- to qualify for the U.S. Olympic Track and Field Trials, but he failed to qualify for the finals with a first-round time of 8:56.81.

Pascoe said the rivalry between college runners in Arkansas is free of animosity.

"We have a good group," he said. "We all know each other. We just like to make it a fun race."

The leaders wound through the Hillcrest neighborhood along and near Woodlawn Drive.

Shortly after Cain and Whaley turned northwest off Spruce Street onto Kavanaugh Boulevard, Cain began to open a gap. He ran through the 2-mile split in 9:55 with a three-second lead that expanded progressively as he headed south and downhill on Van Buren.

Cain said he was unaware of how much he had opened up on Whaley.

"My coach always told me in high school, when you get to a downhill, just sprint it," Cain said. "Don't look back."

Woodward was never certain how she stood in the women's field, but said she relied on a psychological ploy she has used throughout her running career.

"I just wanted to keep pushing," she said. "When I'm in a race where there are guys and girls, I always imagine that the next female is right on my heels, so I just try to keep a mindset to keep going forward and try to stay in the lead."

Woodward ran through the first and second miles in 5:36 and 11:3o, respectively, and led Julia Webb by nearly a minute through 2 miles. Woodward said she expected to run no faster than 18 minutes.

"When I started seeing my splits, I surprised myself a little bit," she said. "I didn't think I was in quite that good of shape. Once I realized it, it kind of gave me the motivation and encouragement to keep pushing and keep going to see what I could do."

Pascoe trailed Whaley by four seconds as he veered left for the return, uphill run on Zoo Drive. He passed Whaley and pulled away with a quarter of a mile left to race.

"I could kind of see one [of] them coming back, so I thought maybe I could catch him on the uphill, but for all my work, I couldn't catch [Cain]," Pascoe said.

Whaley said he could not respond to Pascoe's late surge.

This was the first Firecracker for Cain and Whaley.

"I thought the course would be a little bit faster, but after I saw it, it was a little more hilly than I thought," Cain said.

Fleet Feet co-owners and race sponsors Sean and Noelle Coughlan said they expect to return to the traditional course in 2022.

Print Headline: Race to the finish