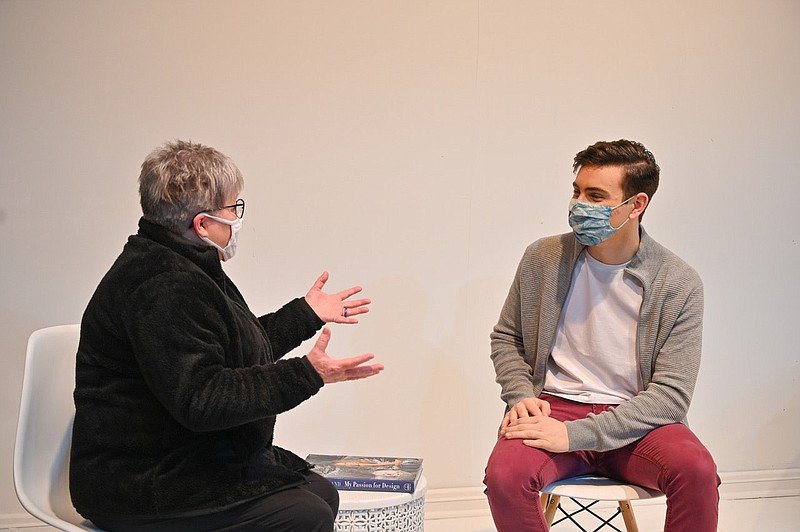 Director Brenda Nemec works with actor Jacob Andrews at rehearsal for “Buyer & Cellar,” the first show live on the APT stage since “Newsies” last February and the first in the region to welcome a live audience since “Ann” was on stage at TheatreSquared in March 2020. (Courtesy Photo/Chad Wigington for APT)

It didn’t really dawn on Jacob Andrews until last week. “I knew there hadn’t been any live shows around here for a long time,” he says. “Then I realized we were going to be the first.”

Brenda Nemec, the director of Arkansas Public Theatre’s “Buyer & Cellar,” throws her arms up like she just scored a touchdown.

“That’s how we feel about it,” she says of breaking the year-long fast at the Victory Theater in Rogers. “We couldn’t be more excited.”

It was Feb. 7, 2020, when APT opened “Newsies,” with a cast of dozens singing and dancing their way through the Disney-esque story of how the “Davids” hawking newspapers stood up to and defeated the rich old “Goliaths” of turn-of-the-century publishing. That means the APT stage will have been dark for just short of a full year when “Buyer & Cellar,” a one-man show starring Andrews, opens Feb. 5.

It wasn’t that APT didn’t have a show on deck sooner. When the pandemic shut down the world, rehearsals were already nearly complete for Steve Martin’s comedy “Meteor Shower,” tickets were being sold, the set had been built, and costumes were hanging in the dressing rooms. Opening night should have been March 20, 2020. But Ed McClure, one of APT’s founders and its artistic director, kept delaying the show, hoping against hope it could be safely produced.

“Seating and protecting the audience would have been manageable,” McClure explains. “But the big issue was having a script that required intimacy in an environment where the actors were supposed to be 12 feet apart. It really came down to this: We could protect the audience but could not protect the performers.”

Instead, APT tried new things to keep theater alive in Rogers. “Mastergate: A Play on Words” was created as a radio-style comedy under the direction of Matthew Etris and debuted May 17, just a couple of months after the theater went dark. It was followed by “Amanda Kill,” an original illustrated YouTube series created by Barry Cobbs. Then the Victory Theater started screening movies, perfecting its covid-19 protocols to be ready when the time came for live theater.

“Buyer & Cellar,” written by Jonathan Tolins, was already on the schedule, but McClure “remixed” the season to make it the first 2021 show. It has only one actor — although he plays multiple roles — which made it perfect as the opener.

” McClure “When we selected it, ‘Buyer & Cellar’ had recently been on Broadway and had gotten pretty good reviews. Once I was able to read it, I saw why — very witty and entertaining, with just enough thoughts on celebrity and excess in our society to make it current.”

The premise of the play is this: An unemployed actor gets a job working for mega-star Barbra Streisand — but it might be one of the weirdest gigs ever. Seems that Streisand has built her own shopping mall in her basement — actually as a way to showcase some of her collections, among them antique dolls and favorite costumes. She wants a “clerk” — someone to dust the collectibles and make sure the popcorn and frozen yogurt machines are always ready for use.

Parts of the story are true.

Streisand really did write a book in 2010 titled “My Passion for Design.” According to her website, “‘My Passion for Design’ [focuses] on the architecture and construction of her newest homes, the dream refuge she has longed for since the days when she shared a small Brooklyn apartment with her mother, brother and grandparents. The book itself, a culmination and reflection of Barbra’s love of American architecture and design between the 18th and 20th centuries, will contain many of her own photographs of the rooms she has decorated, the furniture and art she has collected, and the ravishing gardens she has planned on her land on the California coast. In addition to glimpses of her homes, Barbra will share memories of her childhood, the development of her sense of style, and what collecting has come to mean to her.”

The basement shopping mall, complete with Bee’s Doll Shop and the pink velvet cape she wore when she met the Queen of England in 1966, is also real.

The interactions between Alex, the unemployed gay actor in need of a job, and the lady herself are fictional — and funny and sweet and sad and full of wistful longing.

“Yes, I do play Barbra Streisand, and I am a big fan,” says actor Andrews, who is neither gay nor unemployed and is only 18 years old. “I mean, being someone who grew up around theater, Barbra Streisand was a household name, so it’s definitely been exciting. One of the coolest parts is getting to go back and watch all these iconic movies and listen to her songs again and really study how she carries herself and how she talks and all the details that make her so lovable. It’s like re-experiencing her all over again.

“I play six different colorful characters,” he adds, “and they all have their own personalities, accents and special quirks. They are all pretty developed, although some more than others, but there are no costume changes, so that adds another layer of importance to really making sure each character is different and obvious.

“This experience has been very different for me just by being a one-man show,” he goes on. “It’s my first one, and I’ve learned a lot.”

It is not, however, Andrews’ first time on the APT stage. He was Rocky in the 2019 production of “The Rocky Horror Show” — sharing the stage with his sister Alex as Columbia — and was in the ensemble of “Annie.” “I’ve also been in countless other shows all around Northwest Arkansas,” he adds. “I’ve been performing all my life and was practically born on the stage.”

But, he admits, “I actually hadn’t heard of this show until APT announced they would be doing it. I looked it up and watched some clips of it on YouTube, and it made me laugh out loud, so I knew I had to go for it!”

Director Nemec says the winner of the 2014–15 Lucille Lortel Award for Outstanding Solo Show had been on her radar ever since she first heard of it.

“It is really funny! It has been fun to learn more about Barbra Streisand and to listen to her great music,” she muses. “There are some poignant moments as well that deal with real-life problems in a made-up world.

“I love directing small casts,” she adds, “but one-man shows are really a challenge! Trying to make all the characters come to life is difficult, but Jacob has really been diligent to work on mannerisms and voice changes for each character. Anything we have asked him to do, he has done.”

McClure is just happy to see the lights at APT come on again.

“I love the work it takes to bring a show from idea to performance, but also, I enjoy the constant-ness of a season where one show opens on Friday, and we have auditions for the next show Monday,” he says, knowing that the cast of “The Clean House” by Sarah Ruhl is rehearsing upstairs as “Buyer & Cellar” takes its final shape on stage. “We have missed everyone, and we hope you have missed us!”

WHERE — Arkansas Public Theatre at the Victory in Rogers

FYI — Seating will be socially distanced with 124 patrons maximum, and masks are required to enter the theater.