Golden Lions roaring back as football returns for spring 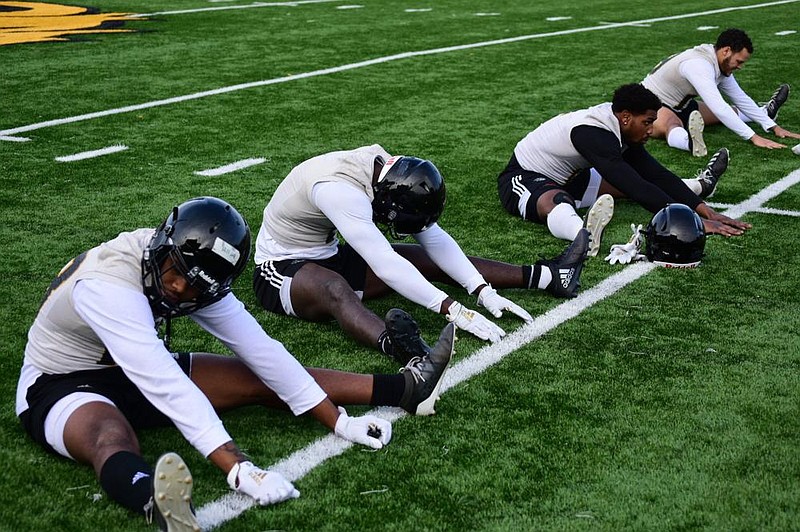 Some of the University of Arkansas at Pine Bluff football players could not hold back their excitement.

Hollers of "Let's go!" emerged from the locker room as Omar Allen, a redshirt sophomore running back and Watson Chapel High School graduate, gave his thoughts about the return of football.

Allen was on the practice field earlier than the ones who burst onto Simmons Bank Field, formerly Golden Lion Stadium, howling in anticipation of practicing for a season that once hung in the balance as the National Collegiate Athletic Association considered precautions against the ongoing coronavirus pandemic. The NCAA had canceled postseason events in spring 2020, and the Southwestern Athletic Conference was among the first leagues to declare football would be moved from the fall to this spring for six games instead of the usual 11.

UAPB's season will begin Feb. 27 at Simmons Bank Field against Texas Southern University. Kickoff times for all of UAPB's games have not yet been determined.

"Anytime we get the chance to play football, I'm happy to do that," Allen said. "We had a fall season camp, so unfortunately [the team didn't play] due to covid, but having this right here is very much a privilege. As a team, I do because the atmosphere just being here, everybody just enjoys being here and everybody just wants to compete. Us as players, that's all we want to do."

[Video not showing up above? Click here to watch » https://www.youtube.com/watch?v=-AEAlfFC8qM]

Friday marked the first day of preseason camp for UAPB, which is coming off its first winning season, at 6-5, since winning the 2012 SWAC championship. The last time the Lions played a game, they defeated Texas Southern 45-13 on Nov. 23, 2019.

Much has happened within the Lions' program since that game. Cedric Thomas stepped down as head coach to take an assistant position at the University of Southern Mississippi and was replaced in the interim by Cincinnati native Doc Gamble last February. Two months later, Gamble's interim tag was lifted.

Proverbial butterflies fluttered little to none in the cool and collected former associate head coach. Only anticipation reigned.

"Once the ball is kicked, you're locked and loaded," Gamble said. "You may feel a little something during practice and pregame workouts, but after that, you're just coaching your team."

The goal at the start of camp, Gamble said, was for the Golden Lions to get reacclimated to how things are done within the program and find out how much information the players retained from fall drills.

"What I would like to see today is our guys be bored, so to speak, like, 'I know it,'" Gamble said Friday. "You know what I'm saying? That's a good sign for me. If their heads are swimming and things are moving fast for them, then I'm like, 'Oh, come on now, you've been out here, so you know how things are like.' Where I'm getting at is I'm looking for perfection from our guys and getting our younger guys. You play with your starters, but you win with your next guy in, so that's what we're searching for, our next guy in."

The sounds of the spring 2021 football season may be quieter than usual fall campaigns. For one, on Friday the SWAC announced that visiting bands will not be permitted to travel to regular-season games, and no bands will be allowed at neutral-site games.

Charles McClelland, the SWAC commissioner, said in a statement that "it became abundantly clear that the elimination of all travel for SWAC member institutions' bands was a significant step toward ensuring an optimal health and safety environment for the upcoming Spring 2021 football season. The health, safety and welfare of our students and student-athletes will continue to be the driving force behind all of our decisions related to athletic activities and events held within the Southwestern Athletic Conference during this global pandemic."

UAPB officials have not determined whether fans will be allowed at home football games, according to spokesmen for the school's athletic department. The ban is currently in place for home sporting events such as basketball and volleyball, the latter sport also moved from the fall.

The university also has not decided whether to hold homecoming activities for the spring season.

"When you're playing the game, you don't look back in the stands," Allen said. "The stands are great. You feed off the energy, but when you're out here, you have to find something to feed off of. You've got to find your own juice. You've got to find your own music, so coming out here and competing with your own teammates, having fun playing the game, it's a privilege to come out and play."

Some things, however, will return.

The NCAA will hold its Division I Football Championship playoffs this spring, but sticking with tradition, the SWAC does not send a team to that tournament and instead holds a conference title game between winners of the West and East divisions at the site of the team with the better record. UAPB won its only outright conference championship in that game more than eight years ago, when it was held in Birmingham, Ala.

There's also something else to howl -- or, in the Lions' case, roar -- about: The NCAA is still planning a fall football season for this year.

But the spring sports season is already here, and so is football.

"A lot of people wish they were in our position," Allen said. "Just coming out here playing, that's about as much energy as we need."

The SWAC Championship is May 1 at the site of the team with the better record. 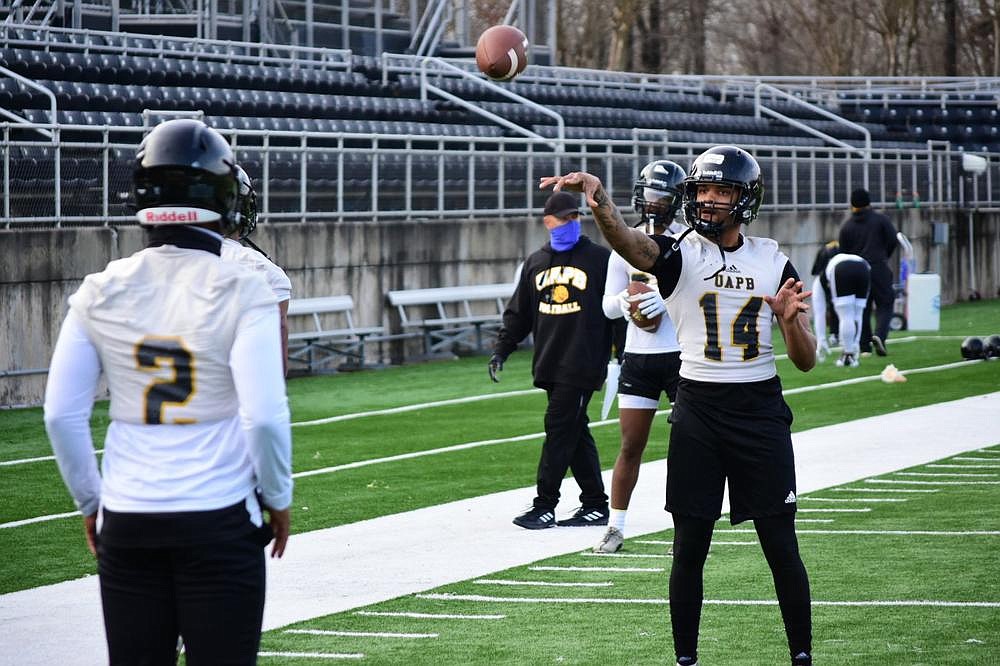 Joshua Hart and Donald Richardson of UAPB warm up their arms before the start of preseason camp Friday at Simmons Bank Field in Pine Bluff. Hart transferred from Arizona State, and Richardson is a newcomer from Arkansas State. (Pine Bluff Commercial/I.C. Murrell) 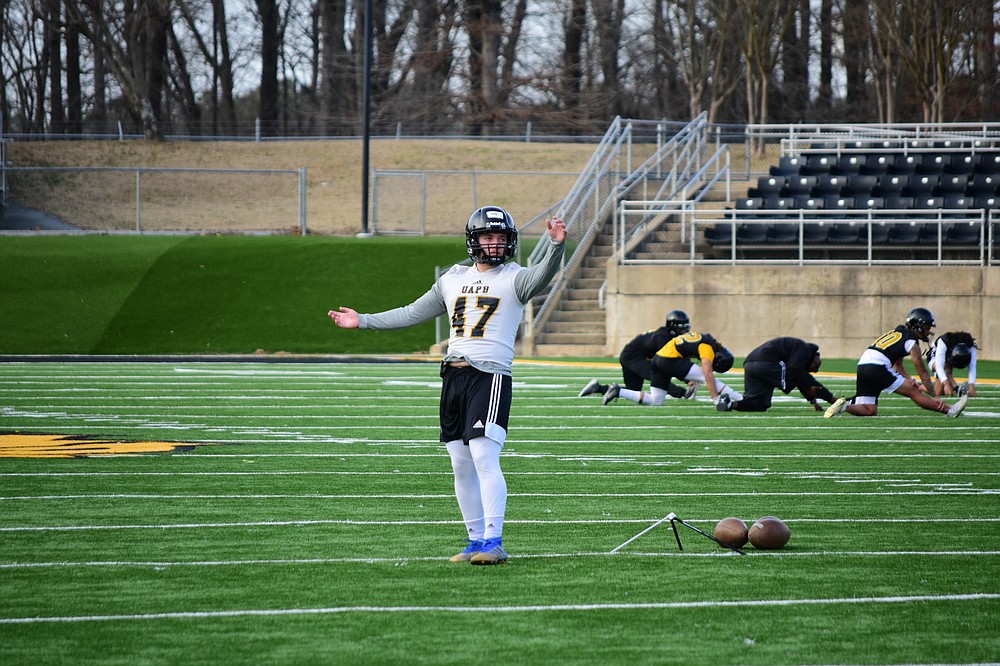 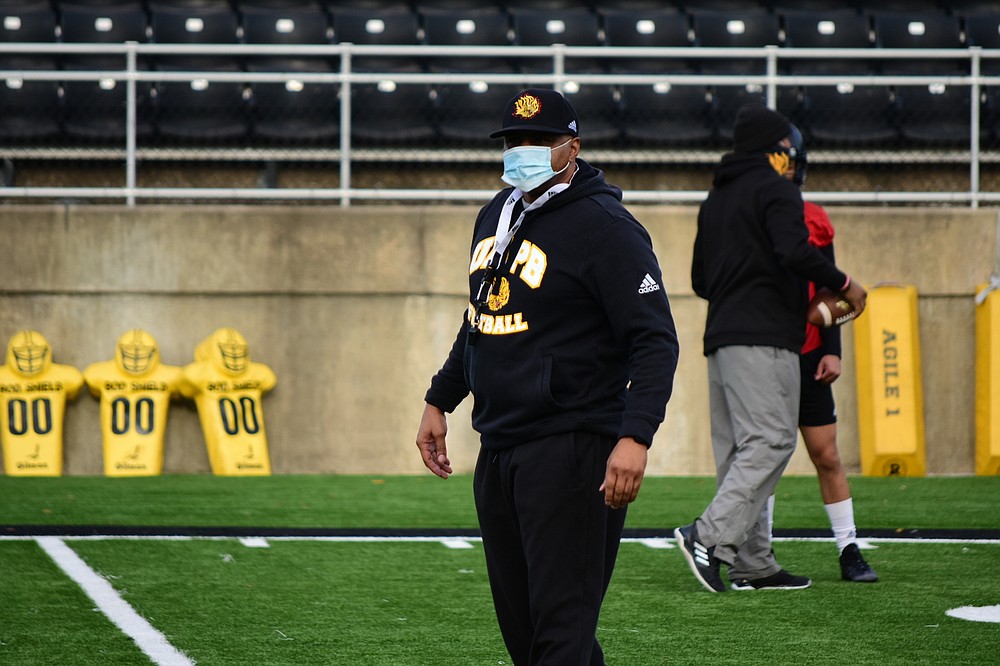 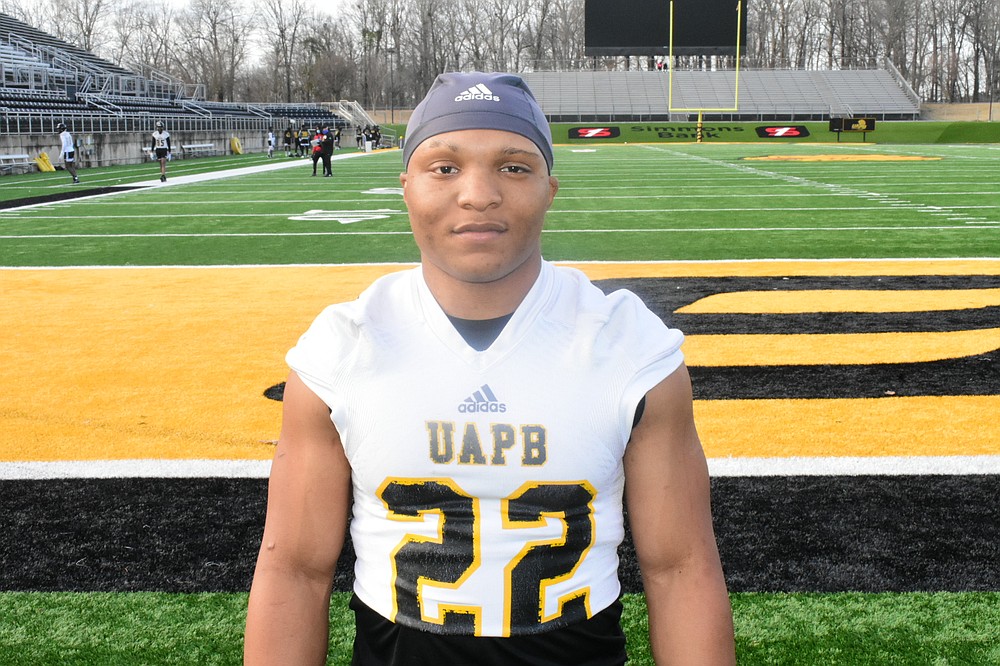