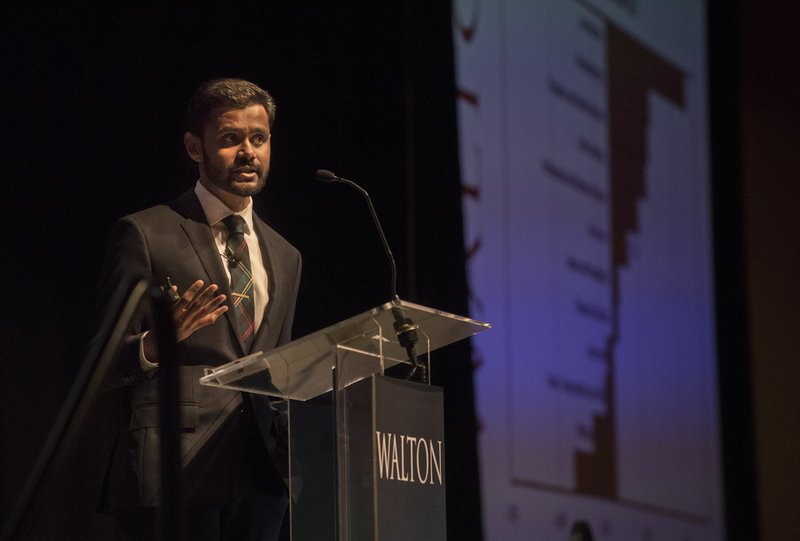 Mervin Jebaraj, director of the University of Arkansas, Fayetteville Center for Business and Economic Research, is shown in this file photo.

The experts at a business forecast event Friday hosted by the Center for Business and Economic Research in Fayetteville presented their predictions on the most urgent question: When will the economy return to its pre-pandemic strength?

The best-case scenario, considering the distribution of covid-19 vaccines, is a return to some sense of normalcy in the second quarter of this year, they said, with several unknowns that could push that prediction back.

Catherine Mann, global chief economist at Citibank, said economies of powerhouse countries will recover at different times after a tumultuous 2020. Factors such as the efficiency of vaccine distribution, could affect the recovery.

So far, China and the U.S. are on track to recover this year, while Europe, which is dealing with mutated strains of the coronavirus, won't begin returning until the end of 2022, she said.

"A delayed timetable is a major head wind for prospects" and fewer investments occur, she said.

Vaccinations, seen an indicator of growth, are expected to help generate a 2% increase in global gross domestic product, if everything goes according to plan.

Mann said many things must go right for a vaccination plan to be effective.

"It's possible, but I think it's important to think about how difficult that is," she said.

Mark Palim, vice president and chief executive at Fannie Mae, the Federal National Mortgage Association, offered a national perspective and predicted the health of the U.S. housing and mortgage market.

He expects domestic GDP will rise to 5.3%, saying his estimates "were not dissimilar" to Mann's.

The U.S. experienced one of its deepest recessions last year, had some recovery in the ensuing months and is on track to continue growing later this year.

Regarding job losses, he said "it's wonderful to see a bounce-back, but important to remember how far we fell."

While people lost their jobs and businesses closed, the housing market firmed up and prices appreciated during the pandemic. He said he expects continued housing market growth when the economy returns, but "nothing like it has been."

Palim said consumer behavioral changes are big unknowns: "Many have the firepower to consume. Are they going to be worried about another outbreak or will they spend this money and return to prior habits?"

Mervin Jebaraj, director of the Center for Business and Economic Research, put a lens on the state with his presentation, "The Arkansas Economy in the Time of Contagion."

During the pandemic, 2020 data shows Arkansas had more than 40,000 fewer jobs compared with the previous year. Industries hit hardest by the recession were leisure and hospitality; followed by manufacturing, mining and logging; other services -- such as nail salons and laundromats; education and health services; government, financial activities and professional and business services.

Jebaraj had a "pessimistic" outlook and estimates Arkansas will get probably half of the jobs back that it lost last year, with the rest returning in following years.

Considering the jobs lost, he said more than 16,000 were in the restaurant and hospitality sector and 3,000 were from nail salons and other services, while several small businesses have felt negative effects from the pandemic, or closed down entirely.

Data shows the number of small businesses open in Arkansas fell almost a quarter from the start of last year, slightly better than the U.S. average of 30%. Most of the state's closed businesses were in leisure and hospitality (36%), followed by retail and transportation (22%) and education and health services (11%). Small-business revenue for Arkansas restaurants, bars and cafes is down 52% from when the pandemic began.

Jebaraj said he doesn't expect all jobs to come back immediately because of issues with back payment of rent, which is being postponed at this point. He is expecting forbearance to run out and for businesses to pay 120% of their rent when the pandemic is contained.

"These are businesses with small margins anyway," Jebaraj said. "A lot of businesses in this sector will do well after an initial surge, but eventually lose because they can't keep up with back payments."

The 27th Arkansas Business Forecast event, presented on Zoom, was sponsored and made possible in part by Walmart and Sam's Club, Greenwood Gearhart financial advisers and RMP law firm, Cox Communications, Regions Bank and a host of other business partners.

A replay of the presentation and more information is available at cber.uark.edu.