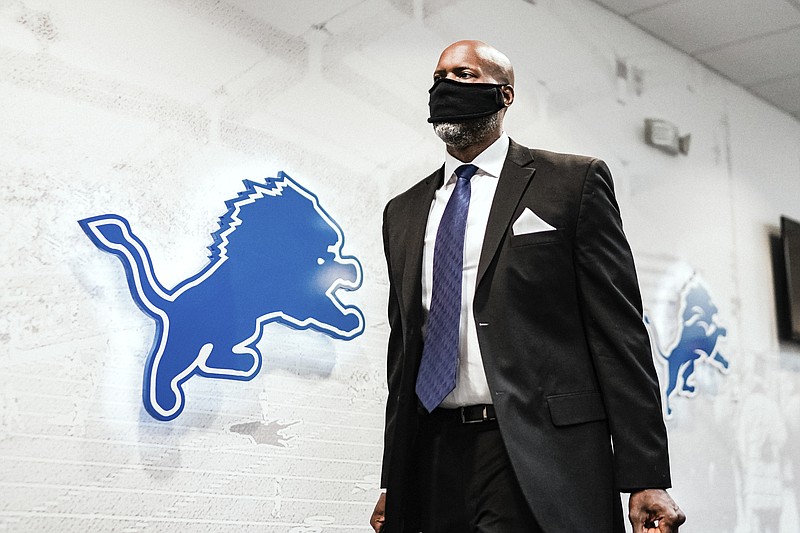 David Culley has been hired as the coach of the Houston Texans, a person familiar with the hiring told The Associated Press. The person spoke to the AP on condition of anonymity Wednesday night. It will be the first head coaching job for the 65-year-old Culley, who has worked as an assistant for the Baltimore Ravens since 2019. He becomes the fourth coach in Texans history, replacing Bill O'Brien, who was fired after the team opened the season 0-4. The Texans interviewed Kansas City offensive coordinator Eric Bieniemy, Indianapolis defensive coordinator Matt Eberflus, Buffalo assistant head coach/defensive coordinator Leslie Frazier, former Detroit coach Jim Caldwell, former Cincinnati coach Marvin Lewis and Carolina offensive coordinator Joe Brady before landing on Culley.

The Seattle Seahawks said Wednesday that offensive lineman Chad Wheeler is no longer a member of the team after his arrest last weekend for investigation of domestic violence. According to the official NFL transactions, Wheeler was waived by the Seahawks on Wednesday. He joined the Seahawks in 2019 and appeared in five games this season. His contract with the team was set to expire with the start of the new league year in March. Wheeler was arrested by police in the Seattle suburb of Kent, Wash., and booked into the King County Jail early Saturday for investigation of felony domestic violence. He had an initial court appearance Monday and was released from jail Tuesday after posting $400,000 bond.

The Detroit Lions have hired offensive coordinator Anthony Lynn, who led the Los Angeles Chargers for four seasons before being fired earlier this month. Detroit added Lynn to first-year Coach Dan Campbell's staff Wednesday, days after hiring Aaron Glenn to be their defensive coordinator. Lynn had a 33-31 record in the regular season and was 1-1 in the playoffs with the Chargers from 2017-20. He was 0-1 as interim coach of the Buffalo Bills in 2016 when he also served as offensive coordinator for 14 games. Lynn played running back for Denver and San Francisco from 1993-99.

IOC President Thomas Bach hit back at continuing speculation about if the Tokyo Olympics may be canceled or postponed again, saying Wednesday that such talk is damaging for the thousands of athletes preparing to take part this year. The International Olympic Committee and organizers in Japan have repeatedly insisted there is no Plan B for the Tokyo Games, which were already postponed by one year during the coronavirus pandemic. Last week, Japan's government quickly and firmly dismissed a report that it had concluded the games would have to be canceled. However, talk about whether the games can go ahead refuses to go away. "All these speculations are hurting the athletes in their preparations," Bach said after a monthly meeting of the IOC executive board. The Tokyo Games are scheduled to open on July 23, with 11,000 athletes competing in 33 sports. A total of 61% of entry places -- more than 6,700 -- have been earned and confirmed, the IOC said.

The New York Yankees agreed to a $2.5 million, one-year contract with submarining right-hander Darren O'Day, a person familiar with the negotiations told The Associated Press on Wednesday. O'Day takes the spot vacated when the Yankees traded right-hander Adam Ottavino to Boston on Monday, a move that cut $7.15 million from New York's payroll. O'Day figures to join left-hander Zack Britton and right-hander Chad Green as the primary setup men for closer Aroldis Chapman. O'Day, 38, was 4-0 with a 1.10 ERA in 161/3 innings over 19 games last year with Atlanta, striking out 22 and walking 5 while allowing 8 hits.

The New York Mets added a left-hander to their bullpen, agreeing to a one-year contract with Aaron Loup, a person familiar with the negotiations told The Associated Press. Loup, 33, was 3-2 with a 2.52 ERA in 25 innings over 24 games for AL champion Tampa Bay last season, allowing 17 hits while striking out 22 and walking 4. Once considered a lefty specialist, he held right-handed batters to a .192 average with 3 home runs in 58 plate appearances, and left-handed batters to a .212 average with no home runs in 38 plate appearances. Loup did not allow a run in eight of nine postseason appearances.

Denver Nuggets guard Jamal Murray was fined $25,000 by the NBA on Wednesday for a shot to the groin area of Dallas' Tim Hardaway Jr. Murray was ejected after the apparently intentional act in the third quarter of a game Monday night. The Nuggets won 117-113. Murray stumbled backward after colliding with Hardaway as Denver was setting up on offense. Murray got up and reached between Hardaway's legs with his right arm, prompting Hardaway to double over. The official closest to the contact blew the whistle to stop play with 4:51 left in the third quarter and conferred with the other referees. The initial call was a foul on Murray, and it was upgraded to a flagrant-2 foul after a video review.