Virus out of control in U.S., says health chief nominee by Compiled by Democrat-Gazette Staff From Wire Reports | January 25, 2021 at 7:14 a.m. 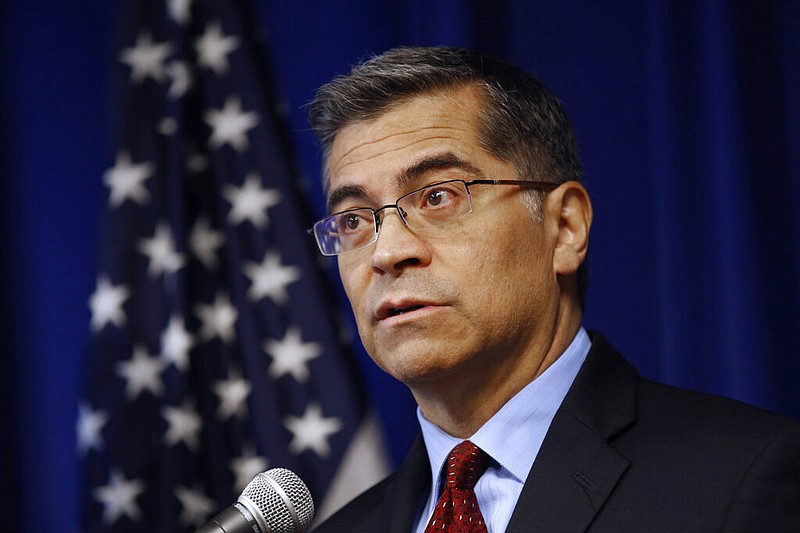 Xavier Becerra, then California's attorney general, speaks during a news conference in Sacramento, Calif., in this Dec. 4, 2019, file photo.

WASHINGTON -- Xavier Becerra, President Joe Biden's nominee to be the nation's top health official, on Sunday likened the U.S. spread of covid-19 to a "plane in a nosedive" as the new administration vowed to rapidly ramp up vaccinations against a virus that has killed more than 419,000 Americans.

Becerra, California's attorney general and Biden's pick to be secretary of the Department of Health and Human Services, told CNN's "State of the Union" that the spread of the virus is uncontrolled in the United States. The country has reported more than 25 million cases, about one-quarter of the world's total.

Facing a record number of covid-19 patients, hundreds of the nation's intensive care units are running out of space and supplies and competing to hire temporary traveling nurses at soaring rates.

Administration officials cautioned it will take time to reduce the virus's spread because for now there simply isn't enough vaccine to go around.

[Video not showing up above? Click here to watch » https://www.youtube.com/watch?v=9cSd02d5zMA]

"I think that the supply is probably going to be the most limiting constraint early on, and we're really hoping that after that first 100 days we will have much more production," the director of the Centers for Disease Control and Prevention, Rochelle Walensky, said on "Fox News Sunday."

Fauci said the push to inoculate as many people as possible was a race against emerging new variants of the virus because existing vaccines may at some point lose some of their effectiveness against mutations.

"What we will do, and are doing already, is making preparations for the possibility that down the pipe, down the line, we may need to modify and upgrade the vaccines," Fauci said.

He said although such modified vaccines weren't necessary at this juncture, "the best way to prevent the further evolution of these mutants is to vaccinate as many people as possible."

Biden's chief of staff, Ron Klain, said a comprehensive vaccine distribution plan "did not really exist" when the new president's team took over after his inauguration Wednesday.

Interviewed on NBC's "Meet the Press," Klain said the "fundamental difference" between the former and current administrations is that "we are going to take responsibility at the federal government" level, because states and municipalities are struggling.

"The way in which people get vaccine is chaotic -- it's very limited," said Klain. "The process of getting that vaccine into arms, that's the hard process. That's where we're behind as a country."

An Associated Press analysis of federal hospital data shows that since November, the share of U.S. hospitals nearing the breaking point has doubled. More than 40% of Americans now live in areas running out of ICU space, with only 15% of beds still available.

Intensive care units are the final defense for the sickest of the sick, patients who are nearly suffocating or facing organ failure. Nurses who work in the most stressed ICUs, changing IV bags and monitoring patients on breathing machines, are exhausted.

"You can't push great people forever. Right? I mean, it just isn't possible," said Houston Methodist CEO Dr. Marc Boom, who is among many hospital leaders hoping that the numbers of critically ill covid-19 patients have begun to plateau. Worryingly, there's an average of 20,000 new cases a day in Texas, which has the third-highest death count in the country and more than 13,000 people hospitalized with covid-19-related symptoms.

According to data through Thursday from the COVID Tracking Project, hospitalizations are still high in the West and the South, with over 80,000 current covid-19 hospital patients in those regions.

Encouragingly, hospitalizations appear to have either plateaued or are trending downward across all regions. It's unclear whether the easing will continue with more contagious versions of the virus arising and snags in the rollout of vaccines.

In Los Angeles, Cedars-Sinai Medical Center ran into shortages of take-home oxygen tanks, which meant some patients who could otherwise go home were kept longer, taking up needed beds. But the biggest problem is competing with other hospitals for traveling nurses.

"Initially, when the covid surges were hitting one part of the country at a time, traveling nurses were able to go to areas more severely affected. Now with almost the entire country surging at the same time," hospitals are paying twice and three times what they would normally pay for temporary, traveling nurses, said Dr. Jeff Smith, the hospital's chief operating officer.

In New Mexico, one surging hospital system brought in 300 temporary nurses from outside the state, at a cost of millions of dollars, to deal with overflowing ICU patients, who were treated in converted procedure rooms and surgery suites.

Houston Methodist Hospital recently paid $8,000 retention bonuses to keep staff nurses from signing up with agencies that would send them to other hot spots. Pay for traveling nurses can reach $6,000 per week, an enticement that can benefit a nurse but can seem like poaching to the hospital executives who watch nurses leave.

Space is another problem. Augusta University Medical Center in Augusta, Ga., is treating adult ICU patients, under age 30, in the children's hospital. Recovery rooms now have ICU patients, and, if things get worse, other areas -- operating rooms and endoscopy centers -- will be the next areas converted for critical care.

To prevent rural hospitals from sending more patients to Augusta, the hospital is using telemedicine to help manage those patients for as long as possible in their local hospitals.

"It is a model I believe will not only survive the pandemic but will flourish post pandemic," said Dr. Phillip Coule, the Augusta hospital's chief medical officer.

The ICU at Cullman Regional Medical Center in Cullman, Ala., has been overflowing for six weeks, with 16 virus patients on ventilators in a hospital that a year ago had only 10 of the breathing machines, according to Dr. William Smith, the hospital's chief medical officer.

"Just the fatigue of our staff can affect quality of care. I've been encouraged we've been able to keep the quality of care high," Smith said. "You feel like you are in a very precarious situation where errors could occur, but thankfully we've managed to stay on top of things."

Hospitals say they are upholding high standards for patient care, but experts say surges compromise many normal medical practices. Overwhelmed hospitals might be forced to mobilize makeshift ICUs and staff them with personnel without any experience in critical care. They might run out of sedatives, antibiotics, IVs or other supplies they rely on to keep patients calm and comfortable while on ventilators.

"It's really daunting and mentally taxing. You're doing what you believe to be best practice," said Kiersten Henry, a nurse at MedStar Montgomery Medical Center in Olney, Md., and a board director for the American Association of Critical-Care Nurses.

Separately, Dr. Deborah Birx, the Trump administration's coronavirus response coordinator, said Sunday that crucial statements from the White House about the coronavirus pandemic were shaped by misinformation, denial about the severity of covid-19 and the shadow of an upcoming election.

In an interview on "Face the Nation," Birx said that from the outset, progress against the virus was impeded by inconsistent and inept public messaging that played down the gravity of the pandemic and the immediate need for safety precautions. In the White House, she said, "there were people who definitely believed that this was a hoax."

That disbelief in turn was echoed in many pockets across the United States, she said, because at the beginning of the pandemic, public officials did not fully describe the spectrum of disease that the virus could cause.

"And so they saw people get covid and be fine," and that bred skepticism, she explained.

Incomplete messaging had devastating consequences, Birx said. While not specifically naming former President Donald Trump, Birx noted: "Every time a statement was made by a political leader that wasn't consistent with public health needs, that derailed our response. It is also why I went out on the road, because I wasn't censored on the road."

She traveled to several states in the summer and fall, speaking to governors and local officials.

Describing the flow of information to Trump about the virus as chaotic and uncoordinated, Birx said that to this day, she did not know the source of some of the data he was receiving.

"I saw the president presenting graphs that I never made," she said.

Last spring, the White House was very focused on the pandemic. But as months passed and the economy continued to sag, she said, the administration routinely ignored her recommendations for "gating criteria" for activities like indoor restaurant dining. As a workaround, she said, she would speak regularly to governors, repeating her advice.

Former Vice President Mike Pence was aware she was doing so, she said.

Birx came under intense criticism from public health experts for being a part of the Trump apparatus that was promoting misleading, and sometime completely erroneous, information and guidance. She was faulted for not countering Trump's misinformation on the severity of the pandemic, or his promotion of certain bogus treatments, and for not adequately addressing the conflicting messages and approaches coming from the White House as the virus raged out of control.

"I was not able to do national press," she said. "The other thing that was very important to me is, I was not going to go outside of the chain of command."

Birx, a career civil servant and an immunologist who worked extensively on international AIDS relief, is now a special adviser to the Center for Global Health at the Centers for Disease Control and Prevention. She said she planned to announce her retirement in four to six weeks.

Information for this article was contributed by Laura King of the Los Angeles Times; by Carla K. Johnson, Nicky Forster, Marion Renault, Nomaan Merchant and Ken Miller of The Associated Press; and by Jan Hoffman of The New York Times.