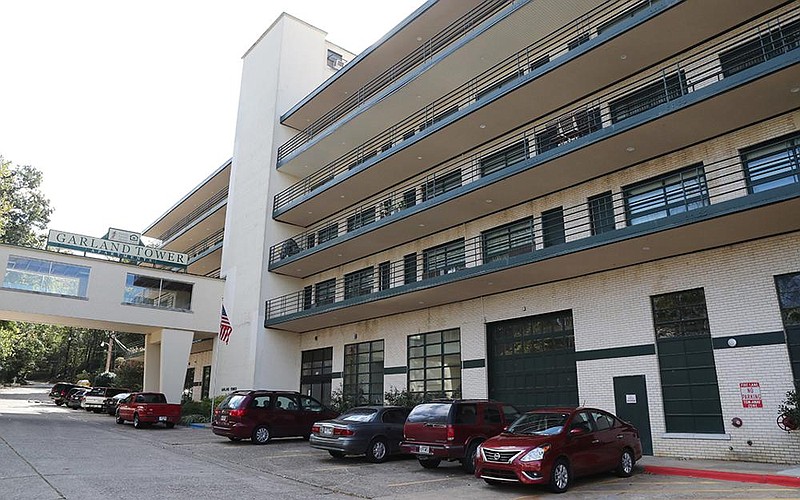 Residents of Garland Towers on Oriole Street in Hot Springs have been offered alternate housing while the apartment building’s owner works to rid the property of Legionella bacteria, an attorney for the owner said Wednesday. (The Sentinel-Record/Richard Rasmussen)

HOT SPRINGS -- Residents of a Hot Springs apartment building have been offered alternate housing while the building's owner works to rid the Oriole Street property of Legionella bacteria, an attorney for the owner said Wednesday.

Richard Watts said Belmont Management Co., the Fort Smith company that owns the Garland Towers building, has hired a Little Rock company to develop a water plan and protocol to remove bacteria that causes Legionnaires' disease. The disease is a waterborne form of pneumonia that the Arkansas Department of Health said can have mild to severe effects and cause death if not treated with the proper course of antibiotics.

According to an Oct. 27 notice that the Health Department sent residents, a copy of which the Health Department provided The Sentinel-Record in response to a records request, a tenant contracted Legionnaires in September. Several residents tested positive for the disease in the fall of 2019, prompting management to ask residents to avoid activities that could create water vapor. The bacteria infects the lungs through water vapor from showers, faucets, hot tubs and air-conditioning towers.

Belmont Management Co. is part of the group that acquired the property from the Garland County Council on Aging in 2006 for $1.75 million. The $400,000 in tax credits the Arkansas Development Finance Authority granted the group the next year were conditioned on rent restrictions being placed on the property's 70 units, reserving them for low-income tenants for a period of 35 years.

The Health Department said last year that the age of most of the tenants puts them at increased risk of developing complications from the bacteria.

It's unclear how many residents have moved to alternate housing. The Health Department declined to answer questions about displaced tenants, and Belmont Management did not return calls seeking comment.

"There are some tenants who are still there," said Watts, who added that he didn't know how many residents have been displaced. "When the Health Department tested, Garland Towers notified all tenants of that and then told them if they wanted to move to alternate housing, Belmont would pay for that. They are doing that. They're continuing to pay for the tenants to live elsewhere while we're trying to remediate the issues around the Legionella bacteria."

According to the October notice, the restriction on water-vapor-creating activity was lifted in December 2019. An email that a Belmont Management representative sent to a public health official in November said that in 2019 Belmont drained the building's entire water system, replaced all shower heads and capped dead-end pipes. Sodium hypochlorite also was injected into the main waterline.

"Legionella is known to grow in pipes that are not regularly used, and all of the water samples that tested positive for Legionella were from empty apartments," the notice said. "None of the samples taken from the main water pipes were positive for Legionella. Based on these test results, we did not conclude that building's water supply is the definite source of Legionella that caused the recent infection in a Garland Towers resident."

Watts said Belmont is working to implement a water plan and protocol. The Health Department said last year that the bacteria thrives in water that is 77-to-109 degrees and is usually found in buildings with chillers and boilers.

"We are trying to make sure we have a plan that will detect and then will destroy it so that nobody else is going to be infected," Watts said. "That's why we gave the tenants an option to move out at our expense while we're looking at every room, and we have looked at every room, and develop a plan to make sure everybody is safe."