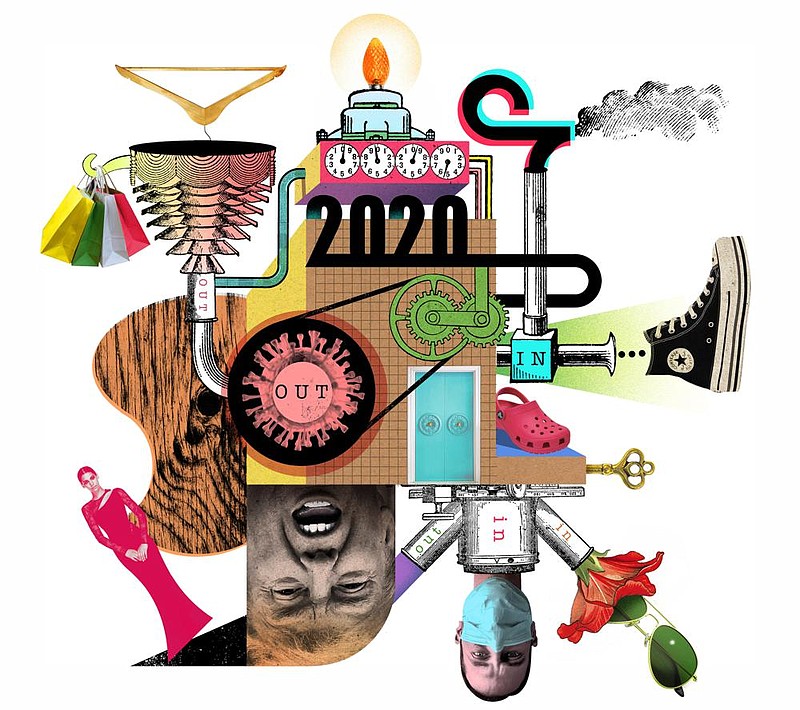 In 2020, everyone’s life (and wardrobe) was turned upside down. (The New York Times/Tim Robinson)

It is a truth generally acknowledged that 2020 will be known as the year that changed everything: our attitude toward our health, technology and the fragility of democracy; the economies of the arts, hospitality, sports and travel.

Will it also be the year that changed what we wear? How could it not? When our sense of identity evolves, so do the clothes we use to express that sense and the industry that enables us.

Some of the changes are obvious: the rise of leggings and loungewear; the mask as accessory; e-commerce as the most popular form of buying and selling; the dominance of the Zoom top. Ditto the fall of department stores -- at least the department store as we know it -- as well as the red carpet.

But more subtle shifts also took place. If style were a stock market, these are the ups and downs in fortune that charted the course of the year.

If we hadn't spent this year desperate for comfort and security, would Crocs have made such a strong comeback? (The company says its revenue, compared to this time last year, is up by more than 15%.)

Possibly. Its status as the Official Shoe of Quarantine was sealed more by the fashion world, with its tendency to resuscitate things once considered ugly or uncool. When Crocs began collaborating with celebrities like Post Malone and Bad Bunny, the brand went street, selling out after each new product dropped.

But it would be a mistake to dismiss the perforated rubber duckbills as just a player in the ugly/comfy shoe trend. Crocs are functional; there is a reason they're popular among people who spend hours on their feet. Now, with their high markups on resale sites like Grailed or StockX, it can be easy to forget that Crocs aren't just for Instagram. Health care workers have relied on the shoes to get them through long days and nights on the front lines.

Remember closets? Since March, when lockdowns began in this country, few of us have had much occasion to visit the cramped and jumbled spaces Marie Kondo considers graveyards of energy and marketers spend billions trying to get us to organize. Why bother when you can just pick up yesterday's sweats off the floor?

"Everything that was so important became meaningless," said Sasha Charnin Morrison, style director of CBS Watch! magazine. Those 10 beloved variations of the little black dress? Forgotten. That "crucial" pair of Miu Miu platforms with 6-inch heels? Doorstops. The Zara shmattes bought in multiples because they cost so little? Hauled to Housing Works.

The category is Cool Grandpa Realness. Imagine you win the presidency. You are the oldest man ever to hold that office. Everybody by now knows that politicians micromanage every aspect of their appearance. Your challenge is to serve vitality for the benefit of younger voters without alienating the Metamucil set. No element is too trivial to be considered. (See: Mom jeans, campaign '08.) Your suits will be slim, denims unironed, ties blue and sober, footwear confined to Oxfords and the occasional driving shoe. For a cool prop, look to shades.

TikTok hit mainstream culture in 2020, knocking Facebook off the top spot to become the most downloaded app of the year as millions of content-hungry consumers stuck in lockdown looked for new ways to socialize and stay entertained. And since February, when Charli D'Amelio, one of TikTok's top influencers, sat front row at the Prada runway show, the flirtation between the social media platform and high fashion has become increasingly impossible to ignore.

Remember the days of the taffeta mermaid dress? The fairy princess tulle extravaganza? Remember, even, the attention-grabbing little bits of latex that could barely be called a dress but were? Remember when party dressing was a thing?

The pandemic put a stop to traditional red carpet events, not to mention glitzy megaweddings, bar mitzvahs, birthday and anniversary celebrations -- and proved disastrous for the eveningwear businesses. Celebrities did their darnedest to get back in the mood by social distancing in style at events like the American Music Awards (Hello, Jennifer Lopez in silver, midriff-baring Balmain), but it just didn't have the same filter-down effect.

Isolation may have made us all ever more aware of the importance of the ties that bind us together, but it also made us reject the belts and any other garments that physically bind us. For those more frequently at home, who were most often in a chair in front of a screen for hours on end, their exercise regimens on hold, comfort clothes became the fashion choice of first resort, even after we got over wallowing in comfort food.

It may have started with leggings and sweats, but the elastic waist has now infiltrated every part of the wardrobe. Sequin skirts and trousers? Suit pants? It's in there. From stiff to stretch: That's evolution for ya.

"The most famous men's clothing street in the world is gasping for life," a November article on Savile Row in The New York Times declared. Even before the pandemic, changing tastes and rising rents had long been weighing on the 100-meter-long stretch of the Mayfair neighborhood, which now has at least 10 empty storefronts. Kilgour, French & Stanbury closed in March, following Chester Amies and Hardy Amies in 2019.

With international fittings limited by travel restrictions (70% of Savile Row tailors' revenue comes from overseas trunk shows) and little need for power suits in lockdown, London tailors found themselves alone with their shears and an existential question: Has covid-19 broken the back of the bespoke tradition? Some tailors are now offering digital consultations and fittings, but it remains to be seen if the exactingly cut uniforms of the Masters of the Universe (and the royal family) will rise again.

Face masks were many a thing this past year: crucial health measure, sign of communal solidarity, political football, important income stream, fashion statement and, latterly, highly visible call to action. Naomi Osaka paid homage to Black men and woman killed by police by wearing their names on her masks during the U.S. Open. Snoop Dogg, Sandra Oh and Hillary Clinton (among many celebrity others) wore "Vote" masks, and Christian Siriano handed them out to guests at his September show (which also featured a "Vote" dress).

Together they helped masks become the personal poster board of choice in 2020, proving you could be sensitive to the welfare of others and make a statement, too. After all, if you have to wear a piece of cloth around your mouth whenever you leave the house, you might as well make it say something. Literally.

Down: The Fashion Calendar

It is possible that when we look back in fashion history, February-March 2020 will be understood as the last time the hordes of editors, retailers and influencers moved in lockstep from New York to London to Milan to Paris on the four-city fashion circuit. The switch from physical to digital shows didn't just demand a rethinking of how to unveil a collection; it freed fashion from its allegiance to the increasingly calcified slots on the official show schedules. The latest round of shows began in September and stretched through mid-December.

Malls and department stores have been declining for years, struggling to survive the rise of e-commerce. But these hardships were nothing compared to what the pandemic had in store. Even if you wanted to go shopping, it either wasn't possible (in the early days) or advisable (um, now).

But something happened to shoppers, too, when they stopped getting dressed for work, meeting up with friends or attending events. Shopping habits were reconsidered. It became harder to justify buying something if you couldn't imagine wearing it at home -- which was a boon for the piles of loungewear ordered online but not so much for the wedding guest outfit, the job interview ensemble or the holiday party look you may have browsed for at Zara, Neiman Marcus or Jeffrey.

Instead of high-tech, Jonathan Anderson, founder of the JW Anderson line as well as artistic director of Loewe and a Moncler Genius collaborator, went tactile for his namesake line, shrinking his lookbooks into toy-size cutouts complete with fabric swatches and backdrops so that all his onetime invitees could construct their own do-it-yourself runways.

For Loewe, he took the same idea and up-sized it to a wallpaper roll -- application at the discretion of the user -- and for Moncler, he transposed it into a portable gallery: hang photos as you will. In between, he crocheted a multicolor cardigan for Harry Styles that launched a thousand TikTok challenges and gave multitudes of fans a lockdown project.

In other words, even in isolation, Anderson figured out how to create interaction and proved sometimes thinking outside the box actually means going inside the box.

At some point this fall, people began noticing that Kamala Harris really liked to wear Chuck Taylors All Stars. (Elle nicknamed her "the Converse candidate.") In an interview with Complex, the vice president acknowledged the fascination; she suspected her shoes resonated because "we all want to go back to some basic stuff about who we are as a country."

Chuck Taylors are not political. They're not a white pantsuit or MAGA hat. They're a casual wardrobe staple, as ordinary and basic as any white T-shirt or pair of jeans. But they don't feel so ordinary when the first female vice president (and woman of color) wears them. Converse, the 112-year-old brand that has sold Chucks for 103 of those years, has a sudden and unusual chance to recapture the public's imagination.

Obvious win for 2020? Some of the diversity that for too long had eluded fashion. Gone are the days of lily-white catwalks and magazine covers and the seedy rationales for why things remained that way. Yet the irony is lost on few in fashion that, at precisely the moment when an epochal shift in representation occurred, the modeling business effectively shut down.

"Models have a year, maximum five, these days to hit, peak and earn," said James Scully, a former casting director notable for his discoveries -- think Liya Kebede and Alek Wek. "Now every career is stalled."

This is bad news for the genetically blessed. But it's also grim for the legions of model hounds that track their every move. Call it a lose-lose when models are deprived of bookings and fans can't get a fix. Many young talents are marooned without visas in their countries of origin, and model hounds are left with no choice but to zone out on endless loops of Naomi Campbell or Linda Evangelista killing the Versace catwalk on Instagram.

"Models make fashion," Scully said. And it's true. If our ideals of perfection are ever-evolving, one enduring delight of fashion is seeing what variety of consumable beauty it will send down the conveyor belt next.