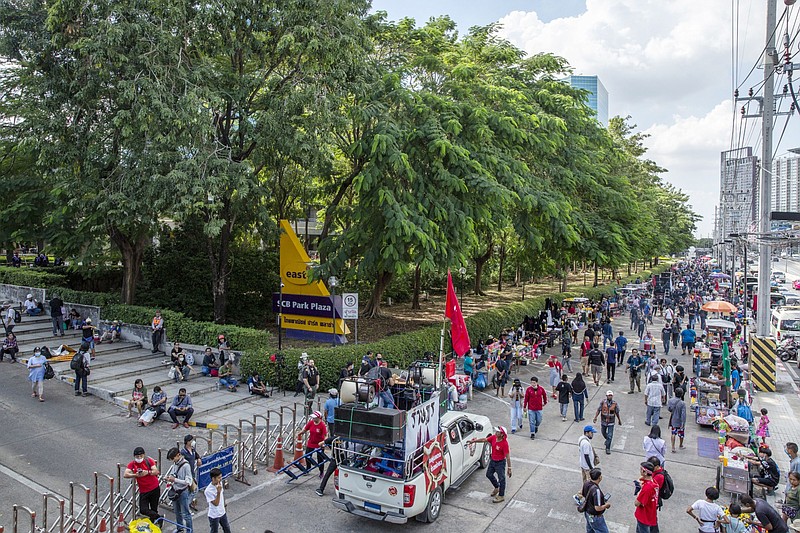 After political and economic instability saw unprecedented demands for reform of the Thai monarchy, King Maha Vajiralongkorn is seeking to burnish his image in what is shaping up as another year of tension in the country.

While some recovery is forecast for 2021, it's set to be relatively anemic for an economy that's been sluggish for years. A new wave of coronavirus infections has seen an extension of a state of emergency until the end of February. Meanwhile, Thailand's biggest opposition party plans to pursue a no-confidence vote against the government for its alleged "mismanagement" of the country, including the covid-19 response.

Looming over everything is the months of rallies where protesters have openly criticized the monarchy, Thailand's most powerful institution. Right now the streets are relatively quiet, but student leaders have vowed to return until their demands are addressed: less royal power, a more democratic constitution and the resignation of Prayuth, a former army chief who staged a coup in 2014.

Vajiralongkorn has boosted his presence in Thailand since the unrest broke out. He returned in October from Germany, where he had spent much of his reign. The king and his entourage have since attended religious ceremonies, handed out diplomas to graduates, greeted kneeling supporters clad in yellow shirts, and even swept the floor at one of his charity projects.

While Vajiralongkorn automatically inherited vast power and wealth when he ascended the throne in 2016, many Thais also subscribe to a concept of informal authority -- what Buddhists term "barami," or virtue -- that must be earned rather than bequeathed. Over the course of his 70-year reign, the late King Bhumibol Adulyadej accumulated and demonstrated his own barami.

"The moral authority and informal power of King Bhumibol was not transferable," said Thitinan Pongsudhirak, a professor at Chulalongkorn University in Bangkok. "There is not the same kind of ability to summon the different sides to put an end to conflict. In fact, the opposite is happening -- the monarchy has become a party in the conflict. This is something that is very alarming."

During one appearance in November, Vajiralongkorn called Thailand "the land of compromise" in a rare public comment to foreign reporters. The Bureau of the Royal Household did not respond to a request for comment and subsequent calls to the bureau went unanswered.

Unlike past tumult -- Thailand has had about a dozen coups in the past century -- the protesters aren't seeking power for themselves: They want the military and monarchy to become more accountable to the country's 70 million citizens.

The stakes both politically and economically are high. Even before the unrest, Thailand's wealth gap had widened, while poverty was on the rise. A 2019 study by the Bank of Thailand's research institute found about 36% of corporate equity is concentrated in the hands of just 500 people.

The government has so far avoided a bloody crackdown like those during some past demonstrations, although at least a dozen protest leaders face charges of insulting the monarch, which carry prison terms of up to 15 years. A Thai court Tuesday sentenced a former civil servant who was arrested in 2015 to 43½ years in prison for sharing clips on social media of an online talk show that allegedly defamed the monarchy, which human-rights group Amnesty International called the harshest conviction under the statute to date.

On Wednesday, the Thai government filed a royal defamation charge against former prime ministerial candidate Thanathorn Juangroongruangkit, one of its most high-profile critics, after he questioned the involvement of a company with links to the monarchy in the nation's vaccine production.

Prayuth's administration is enforcing existing laws and hasn't focused on using one particular statute to target protesters, government spokesman Anucha Burapachaisri has said when asked about use of the lese majeste law.

Master brick mason, 99, built his kids a better life
by Kimberly Dishongh
A route less uncomfortable
by Philip Martin
Legacy lost — Thousands of Rosenwald schools were built to improve education for Black students during Jim Crow era
by Helaine Williams
OPINION | CRITICAL MASS: Nostalgia is realization that we can never go back
by Philip Martin
OPINION | ON BOOKS: Rooting for the Other in 'Klara and the Sun'
by Philip Martin
ADVERTISEMENT