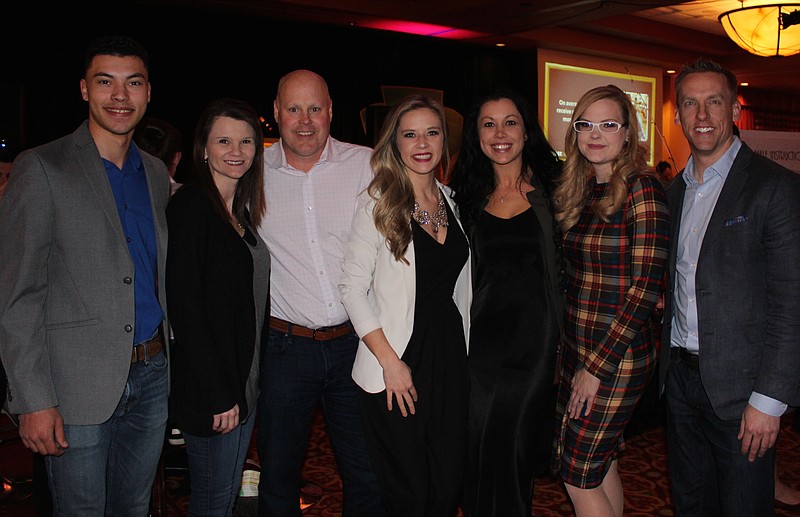 Teen Action Support Center backers will have an opportunity to ante up for the nonprofit organization's All in for TASC benefit sometime this summer. The casino-night event was postponed due to covid-related concerns.

The nonprofit organization, which has locations in Benton and Washington counties, works to fulfill its mission "to empower teens to take action in their own lives and communities." The group serves Northwest Arkansas teens and their families through a variety of offerings such as "In Service," "First Steps" for pregnant or parenting teens, counseling, mentoring and assistance for hardships such as housing and food insecurity.

Coletta Patterson, executive director, says the group is growing and adapting to meet changing needs. "We will open a new teen center in Rogers to reach more teens in Benton County. We will provide a collaborative hub of resources and programming for teens including art and cultural activities, entrepreneurship, community service projects, life skills workshops, mentorship and more. Our goal is to innovatively create programming and services that meet the ever-changing needs of teens and their families in Northwest Arkansas."

Patterson says they have seen the effects of the pandemic on teens, and the need for low-to-no-cost counseling is at an all-time high. According to the group's 2020 Impact Report, the number of teens who sought counseling since last April tripled. TASC was able to meet the need by adding telehealth options to in-person sessions and socially distanced group sessions, providing 672 hours of individual counseling and 28 hours of group counseling.

"We are positioning ourselves to provide exceptional therapeutic care, educational and physical resources to assist teens dealing with trauma and [those] who are going through crisis as well as those who don't have access to co-curricular programs."

Patterson says: "We recently heard from a student who participated in our Thrive program two years ago. He came to us when he had some difficulties with his parents and found himself with nowhere to live. He heard about TASC and within 48 hours, he said he had somewhere to go and other resources he needed to get back on his feet. Now, two years later, he has a stable job and housing and is doing awesome. He said he knows he wouldn't be in this position if it weren't for TASC." 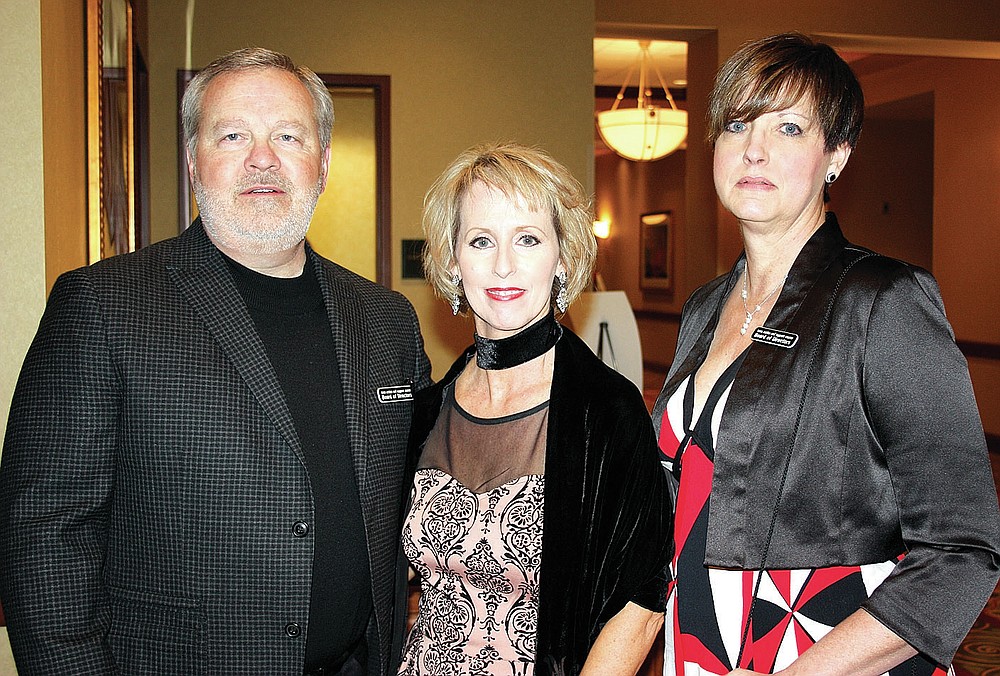 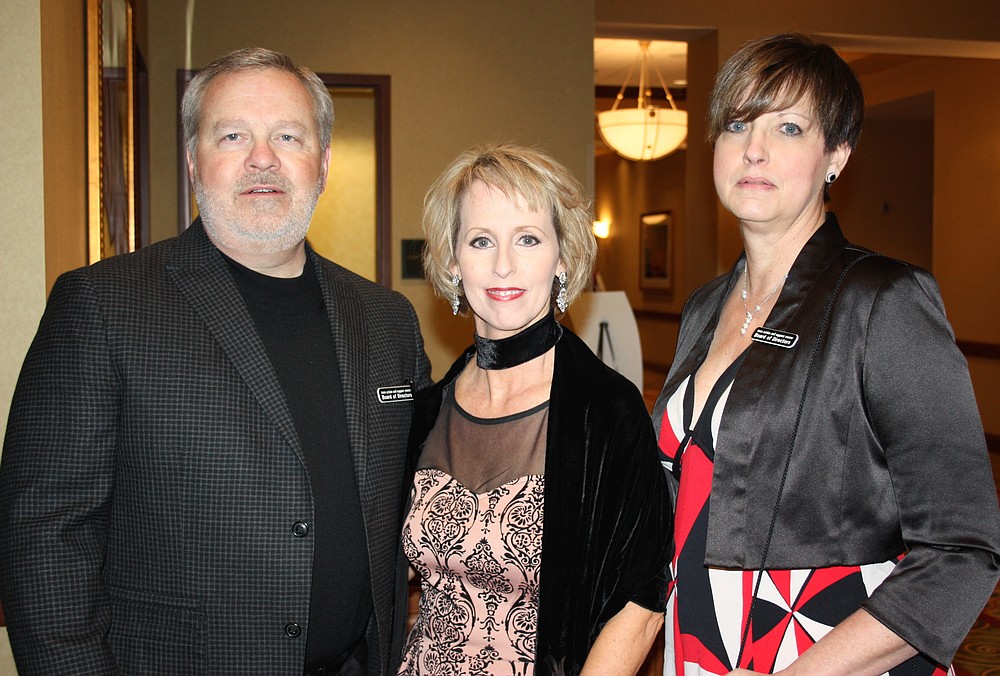 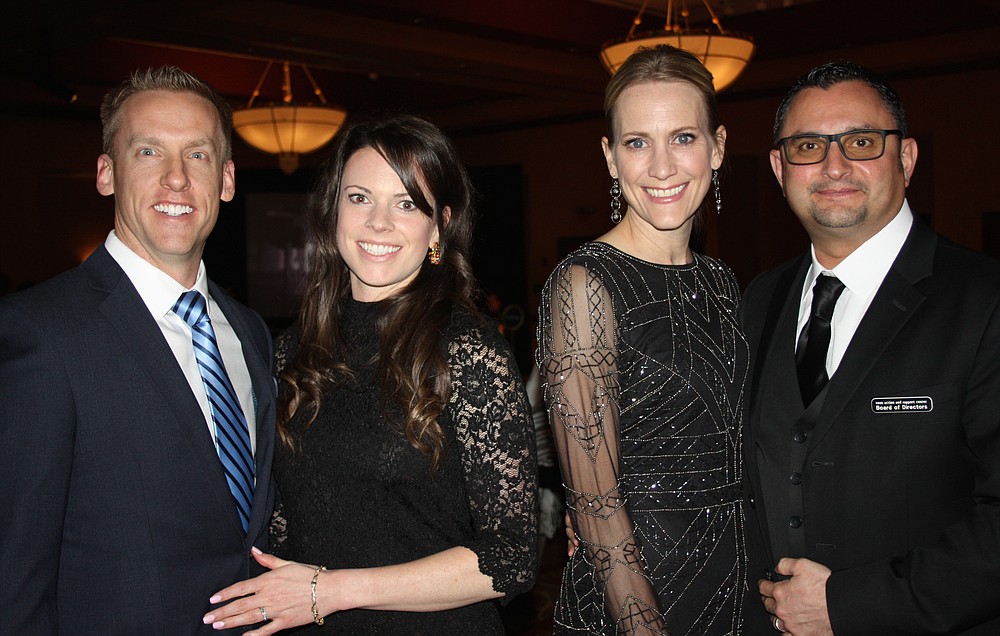 NWA Democrat-Gazette/CARIN SCHOPPMEYER Lane and Sharon Florquist (from left) and Jennifer and Mehrdad Akbar help support the Teen Action Support Center on Jan. 28 at the Embassy Suites in Rogers. 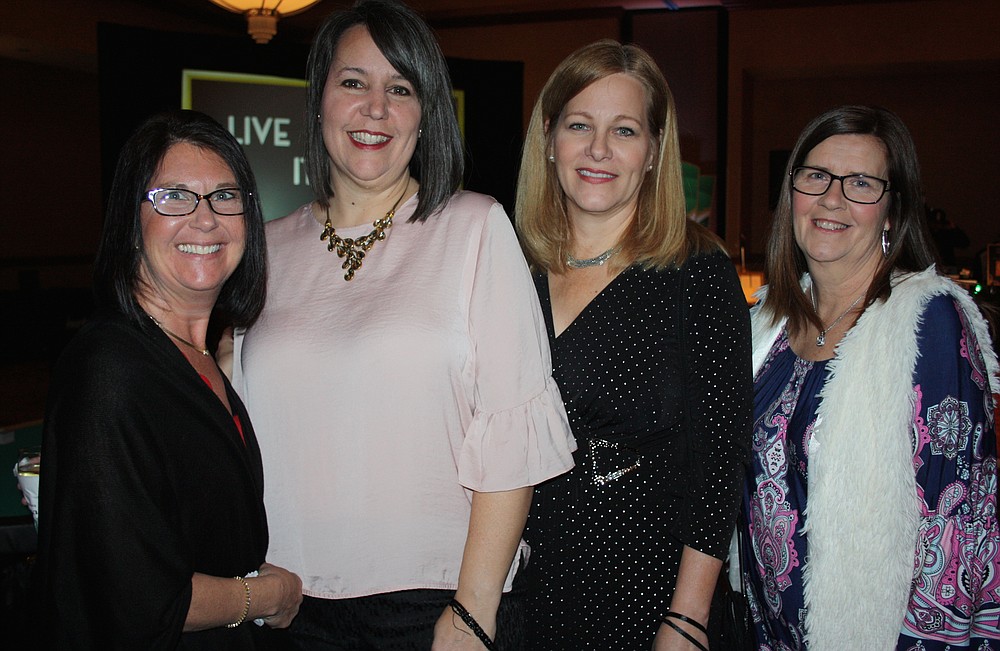 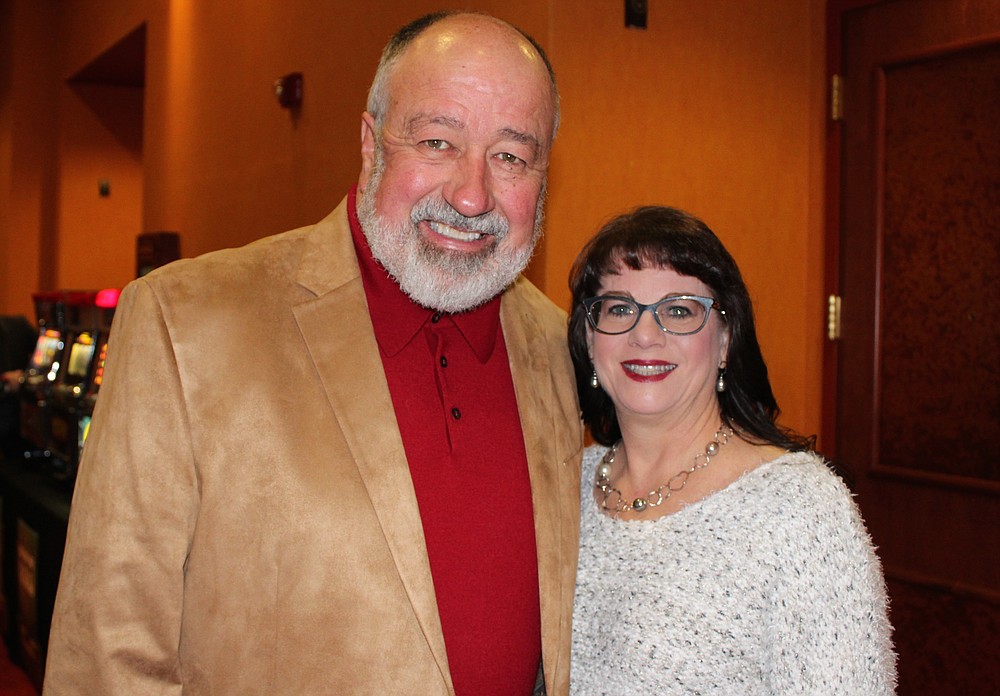 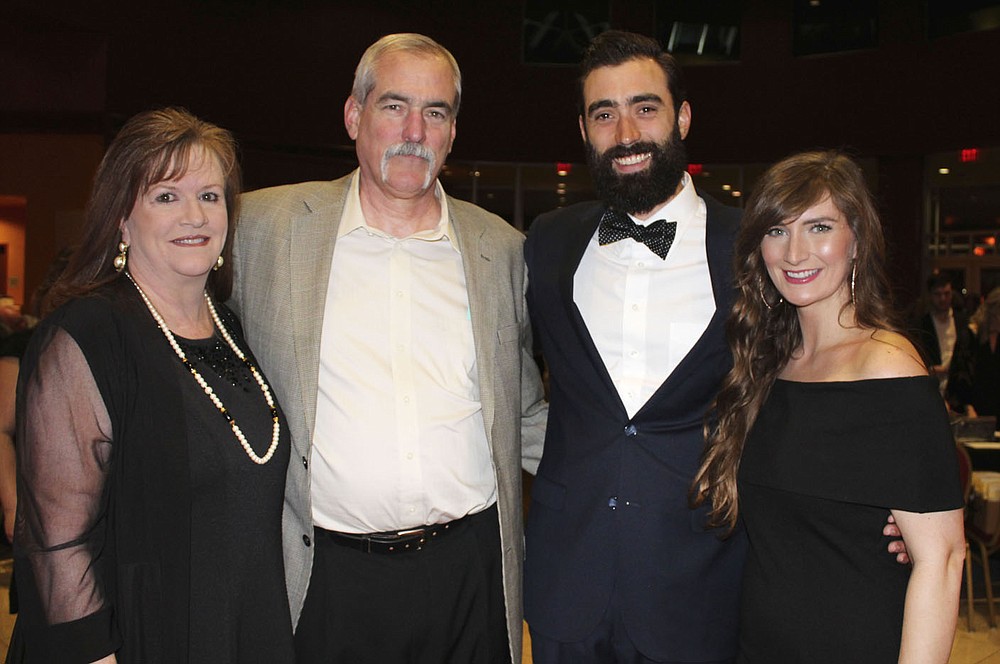 NWA Democrat-Gazette/CARIN SCHOPPMEYER Jill and Steve Mitchael(cq), All In 2018 honorary chairmen (from left) and Jake and Betsy Mitchael enjoy the benefit for Teen Action Support Center on Feb. 2 at the Hammons Center. 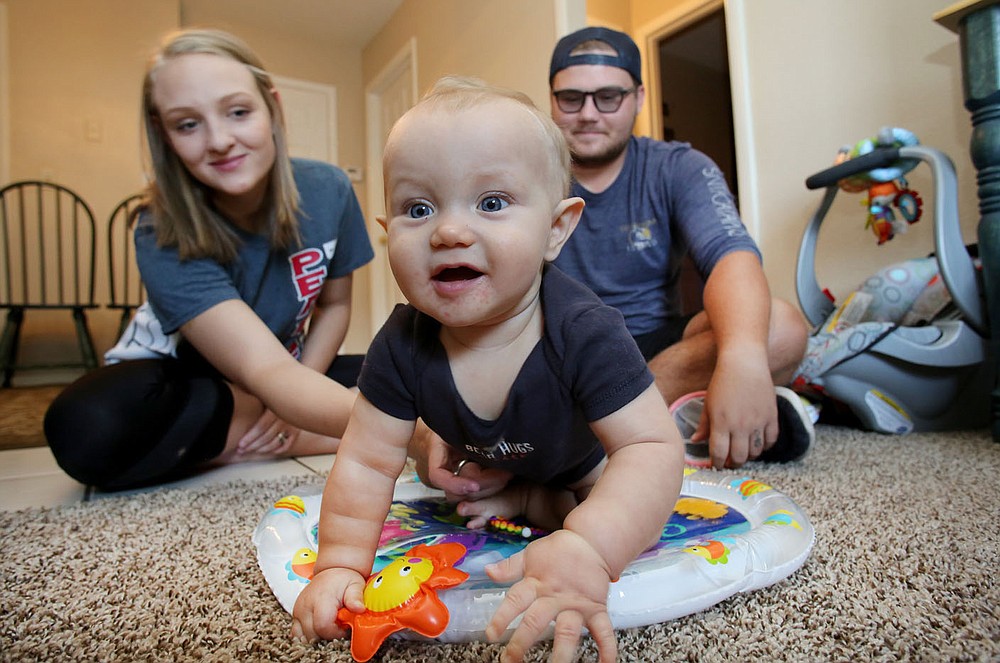 NWA Democrat-Gazette/DAVID GOTTSCHALK Jaylee Kelley and his wife Madalyn play Wednesday, August 1, 2018, with their son Payton inside their apartment in Fayetteville. Teen fathers in northwest Arkansas, like Kelley, have limited parental support resources. The Teen Action and Support Center is working on a teen father mentor group to change that. 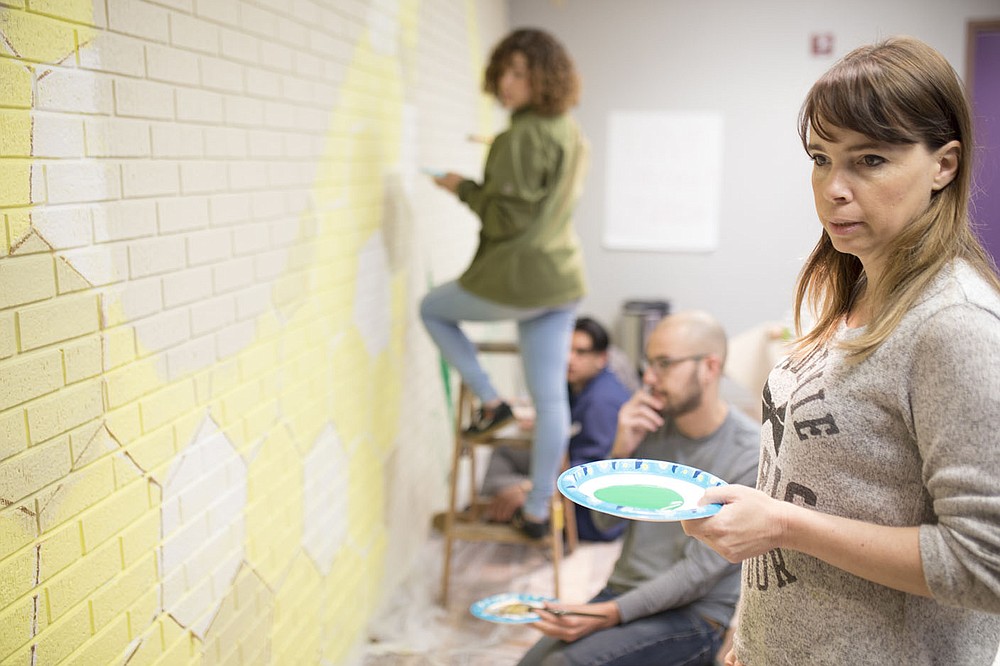 NWA Democrat-Gazette/CHARLIE KAIJO Eve Smith, artist and director of visual arts at the Arts Center of the Ozarks, looks at the mural she and a group of fellow staff and volunteers are helping to create, Sunday, April 8, 2018 at The Station in Springdale. She created the design for the mural. Staff and volunteers are painting a mural in preparation for their grand opening on Thursday. The mural, a collaborative effort by the Teen Action & Support Center (TASC) and the Arts Center of the Ozarks will feature native plants from countries represented at The Station including Marshall Islands, Mexico and El Salvador. The goal is to promote an atmosphere of collaboration, unity and growth said Aron Shelton, director of the Teen Action & Support Center. The Station provides teens a space for creative outlets. The youth can work on robotics projects, spoken word and performance art and fine arts in a collaborative environment. "The goal is to provide a collaborative model for removing barriers to teens success and empowering teens to take action in their own lives and communities," Shelton said. 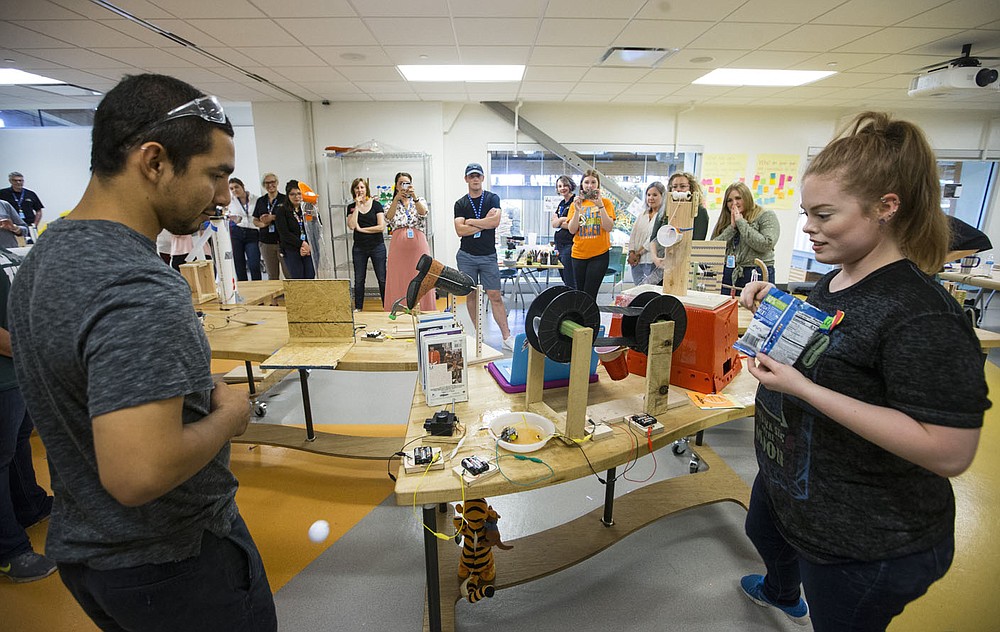 NWA Democrat-Gazette/BEN GOFF @NWABENGOFF Maximiliano Perez, who works with Teen Action and Support Center and volunteers with Stitches in Springdale, and Hayley Chronister, an educator at Mid-America Science Museum in Hot Springs, help get a chain reaction machine working Friday, June 7, 2019, during the Maker Boot Camp for educators at the Scott Family Amazeum in Bentonville. Educators from Northwest Arkansas and beyond spent four days learning hands-on ways to use making and tinkering in their classrooms to facilitate creative thinking, problem solving and collaboration. Participants built the Rube Goldberg style chain reaction machine as the conclusion of the camp.
More News

Mission: We empower teens to take action in their own lives and communities.