Breweries going with the flow 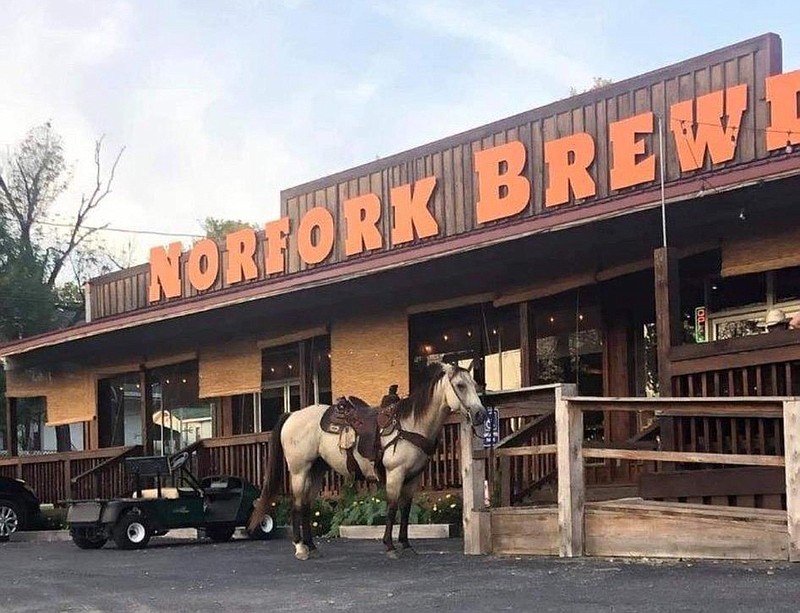 Jason Aamodt, owner and founder of Norfork Brewing Co., added a canning line before the coronavirus pandemic hit, never realizing how vital it would become to the brewery's survival.

When stay-at-home orders went into effect in Arkansas, restaurants closed their doors and the brewery's own taproom was shuttered, the typical channels Norfork Brewing used to sell its suds dried up nearly overnight. That's when Aamodt's attention turned to his recently purchased and idle, canning line.

Aamodt said that when the brewery opened in 2018 in north-central Arkansas, there was no plan for canning, instead the focus was on kegs and sales at the taproom. Norfork Brewing added the canning equipment with the intention of easing into that aspect of the business but that plan went out the window when the coronavirus struck.

"We were sitting there looking at the canning line saying, it's a good thing we bought this," Aamodt said.

Since then, Norfork Brewing shifted from a taproom focused on the community, trout fishermen and tourists in a place Aamodt likens to The Shire, the home of J.R.R. Tolkien's hobbits, into a production brewery. It's canning four of the brewery's top offerings and is having the beer distributed in parts of Arkansas and Oklahoma. The brewery has a 15-barrel setup, capable of producing about 45 barrels of beer a week.

But it wasn't all smooth sailing. There was a can shortage to deal with, so cans had to be obtained and the whole canning process and distribution channels had to be established from the ground up. There was a lot of trial and error and mistakes along the way.

Sylvia Blain, executive director of the Arkansas Brewers Guild, said Arkansas brewers faced a challenging 2020 and are still far from certain about 2021. They're all doing their best to deal with a disruptive business environment.

"Overall -- they are hanging in there. Some breweries are suffering more than others," she said by email recently. "That has a lot to do with whether or not a brewery sells packaged beer or has an outdoor area to utilize for open air service."

Sean Slape, co-owner of Crisis Brewing Co., who had plans in the works to expand production to meet demands at his Fayetteville taproom, also was ready to adjust his business strategy when the pandemic hit. When taproom access was shut down by regulations, he was able to shift to sales of crowlers and bottled beer straight from the brewery.

Some of that spending before the pandemic was particularly fortuitous, including buying a year and a half supply of crowler cans before the can shortage hit.

"The ball was kind of rolling already," Slape said.

Crisis Brewing has added social-distancing protocols in its bar, has tent seating and enclosed some of its outdoor space and added heaters and fire tables to beat back the chill.

"Our customers keep coming back and supporting us," Slape said.

For 2021, national brewery sales models show growth of 6% to 7% over 2020 but production numbers are expected to remain far below 2019 and aren't expected to recover until 2022, according to data gathered by Bart Watson, chief economist for the Brewer's Association.

In Arkansas, beer-makers brewed 16% more in 2019 than in the year before, according to information provided by the Alcoholic Beverage Control Division of the Arkansas Department of Finance and Administration. Arkansas brewers produced 40,818 barrels of suds in 2019, up from 35,193 barrels in 2018. A barrel of beer contains 31 gallons.

Watson said during a phone interview last week that some breweries with the resources are investing in their operations in part to meet the current demand and to help them deal with restrictions in the pandemic. He said others are focused on cutting costs and saving every penny.

He said the challenges faced by breweries in the coronavirus outbreak are unique but they're also temporary and some breweries are looking to the future and what will come when life becomes more normal for their customers. He said those hopes are pinned on an effective rollout of the covid-19 vaccine that could mean consumers being able and willing to return to taprooms by the summer or fall.

"There are plenty of signs demand was always there and that it hasn't gone away," Watson said about craft beer.

Mark Smith, founder and co-owner of Natural State Beer Co. in Rogers, said his brewery kept the business alive during the two months its taproom was closed by selling canned beer. He said as luck would have it, the pandemic led to more people using the Razorback Regional Greenway trails, putting potential customers right next to the brewery, where they'd pick up four-packs of beer. Those customers were a lifeline.

"I'm not sure we'd still be here without that," Smith said.

The brewery also expanded its outdoor seating area by 500 square feet, allowing for extended social distancing with seating for about 70, about half of what it could hold before the pandemic. Natural State Brewing also added sunscreens that can double as windscreens and heaters to keep folks snug. On days where the weather is especially cold, the brewery offers beer discounted based on the outside temperature through its "polar bear pints" promotion.

Smith said the outdoor space makes some customers feel more comfortable because they can keep their distance from other patrons and it will pay off come summer, when he hopes things return a little more to normal.

"People really enjoy being outside," he said.