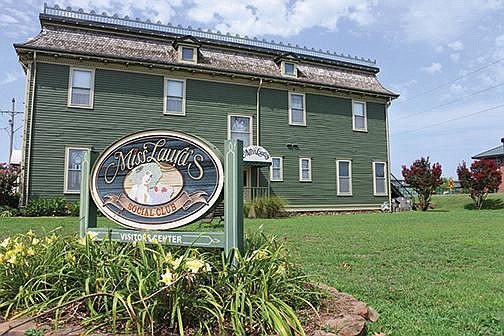 Miss Laura's Visitor Center, where the offices of the Fort Smith Convention and Visitors Bureau are located, are shown Friday, July 17, 2020. One of the responsibilities of the executive director of the Fort Smith Advertising and Promotion Commission is to oversee all operations of the bureau. (Arkansas Democrat-Gazette/Thomas Saccente)

Twenty-one advertising and promotion commissions and convention and visitor bureaus in Arkansas received more than $3.5 million in grants supported by funding from the federal Coronavirus Aid, Relief, and Economic Security Act.

Pine Bluff is among recipients, according to a recent announcement by the Arkansas Department of Parks, Heritage and Tourism. The city's Advertising and Promotion Commission received almost $17,000 from the grant.

Sheri Storie, director of the Pine Bluff commission, said the money will be used to reimburse her office for covid-related equipment purchased for the Pine Bluff Convention Center. She said she was unsure if such costs would be reimbursed.

The Arkansas CARES Act Steering Committee in November approved the grants by using the remaining portion of the funds set aside for municipalities and counties through the program administered by the Department of Finance and Administration, according to the news release.

Grant recipients and amounts received are:

"The people and agencies that promote our state parks and other tourist attractions to the rest of the world are essential to a robust state economy," Gov. Asa Hutchinson said in the news release.

"Their campaigns to spread the word about our museums, bike trails, hunting and fishing, and all the other family friendly opportunities in Arkansas entice tourists by the tens of thousands, which supports jobs and brings in millions of dollars to support our state. The CARES Act funds are a bridge to normalcy after the harm to our tourism industry from covid-19," Hutchinson said.

The grant provided reimbursement to advertising and promotion commissions and convention and visitor bureaus and other quasi-governmental entities for eligible expenditures related to the public health emergency incurred between March 1 and Nov. 15, 2020.

"Our A&Ps and CVBs have been among those hardest hit by this pandemic," said Stacy Hurst, secretary of the Arkansas Department of Parks, Heritage and Tourism. "These entities are central to the success of our tourism industry, which is the second-largest sector of our economy in Arkansas. I want to thank Gov. Hutchinson for his leadership in finding a way to get this crucial support to these organizations."

"We have worked diligently as a department to find ways to support these partners," said Travis Napper, director of Arkansas Tourism.

"These grants will go a long way to benefit tourism in Arkansas, and although 2020 has presented significant setbacks, we're on the right track to come back stronger than before."