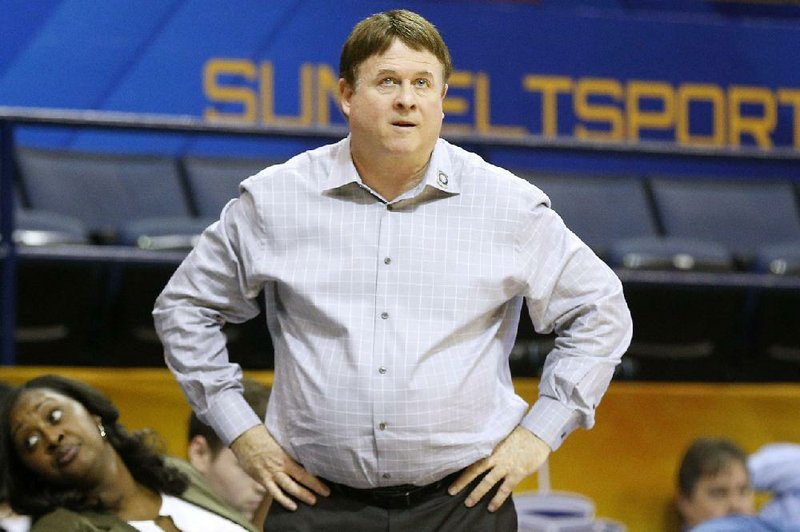 In this file photo UALR head coach Joe Foley reacts during second half action against Appalachian State in the quarterfinal round of the Sunbelt Tournament in New Orleans, March 8, 2018. (Special to the Arkansas Democrat Gazette/JONATHAN BACHMAN)

By the time the University of Arkansas at Little Rock women's basketball team takes its home floor tonight, it will have been nearly three weeks since the Trojans last played a game.

Sidelined since Jan. 2 due to cases of covid-19 within the program, UALR is cleared to return this weekend in time to host Texas-Arlington at the Jack Stephens Center. While the Trojans (5-4, 1-1 Sun Belt Conference) will meet the Mavericks to end the 20-day hiatus, they remain depleted by the virus.

"I don't know if we'll have 10 [players] on the bench or not; probably nine," Coach Joe Foley said. "Two or three of them are freshmen that haven't even played this year. We'll probably be playing with a six-man rotation this weekend."

The shorthanded Trojans will recommence this weekend's conference schedule Texas-Arlington (5-3, 3-1), the same team UALR split a pair of games with to begin Sun Belt play Jan. 1-2.

It was after that trip to Arlington that an undisclosed number of players and at least one member of the Trojans' coaching staff tested positive for covid-19, and a substantial group of close contacts within the program -- including the entire coaching staff -- were placed into enforced quarantines.

UALR returns now to a packed schedule ahead with a number of key contributors expected to be missing.

"We'll be playing six games in the next nine days, with maybe six or seven players playing most of the time," Foley said. "It's going to be challenging."

As for the players Foley will have available to him, conditioning stands as a concern.

UALR has not played a competitive game or even held a full practice since Jan. 2, leaving players who contracted covid-19 and are still suffering from its lingering effects, and teammates kept off the court due to quarantines, far removed from the game-shape they possessed when conference play began.

"I already knew the second I had to quarantine that I was going to be out of shape," senior forward Teal Battle said. "I knew when I got back on the court that I was going to have to work twice as hard to get my body back into that preparation mode."

Those players, who will make up a limited rotation this weekend, are set to be tested and stretched immediately by a Mavericks team that possesses a lineup full of shooters. Texas-Arlington has the No. 3 shooting offense in the Sun Belt, hitting 41.6% from the field, and is led by forward Shyia Smith and her 14.8 points per game.

Smith is also a component of the Mavericks' fierce interior play that -- along with fellow forwards Bre Wickware and Misty Dossey -- placed the Trojans into foul trouble in each of their earlier meetings this season and could prove dangerous to UALR's short bench this weekend.

Ahead of the two-game set, Foley's concerns are tied less to the games in his team's immediate future and more toward getting his team back to to full strength and back into form come March. Even so, he's uncertain of what lies ahead against the Mavericks.

"It's going to be interesting to see how this works out I think it's been about 19 or 20 days since we played anybody. That's almost like an eternity in basketball."