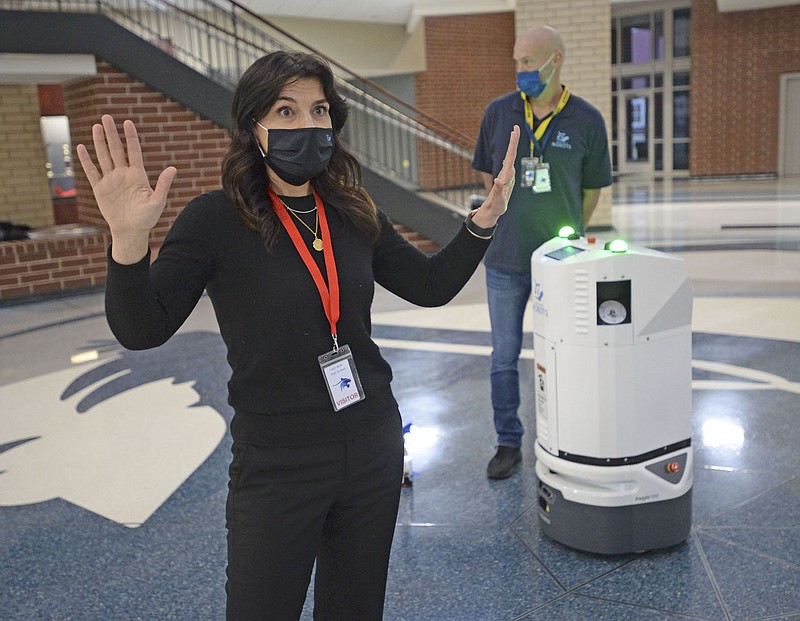 Kimberly Corbitt, head of customer engagement for Build With Robots, speaks Thursday about Breezy One, a sanitizing robot made by her company, at Har-Ber High School in Springdale. The School District would be the first in the state to employ the robot that works to sanitize a 100,000-square-foot building in less than two hours while it’s unoccupied and is 99 percent affective at eliminating viruses and bacteria according to the manufacturer. School District representatives were given a demonstration of its use as they contemplate its purchase. Go to nwaonline.com/210122Daily/ for today’s photo gallery. (NWA Democrat-Gazette/Andy Shupe)

School districts continued to make adjustments to instruction because of covid-19 as the number of active cases at schools ticked upward slightly.

The number of active cases at public school districts increased to 3,064 on Thursday, up from the 3,029 cases tallied Monday, according to data from the state Department of Health.

The Smackover-Norphlet School District today began a shift to online instruction extending through next week.

The district in southern Arkansas has about 1,000 students, according to state data.

The Lafayette County School District on Wednesday announced a shift to online instruction through next week.

The change comes "due to a high number of positive covid-19 cases among students and staff," Superintendent Robert Edwards said in a video posted on social media.

In-person classes are set to resume Feb. 1, Edwards said. As of last Friday, the district had three active cases of covid-19 among students and staff, according to its website; the Health Department report Thursday didn't include the district among those with five or more active cases. The district in southwest Arkansas has an enrollment of 521 students, according to state data.

Gentry Public Schools on Wednesday announced the district's high school would shift to online instruction beginning Thursday through all of next week. The district's primary school, which houses grades kindergarten-second, also changed to online teaching through today.

"This decision was not an easy one to make and it comes after careful consideration of the numbers of staff and students who are absent" and consultation with state education officials, the district stated in a post on social media.

The Little Rock School District on Thursday reported on its website 19 new positive covid-19 cases among students and staff across the district in a 24-hour period that began on 3 p.m. Wednesday, with the total including three students enrolled in virtual programs. No single school in the district had more than three new cases.

The state Health Department report Thursday listed the Little Rock School District as having 101 active cases, fourth most among all districts in the state. Active cases for the district increased from 82 on Monday, according to Health Department data.

Not all adjustments announced by school districts are because of infections.

The Eureka Springs School District in a post on social media announced it will have an online learning day for students on Wednesdayto provide a vaccine clinic for district staff.

As with multiple other districts who have made similar announcements, the district stated school buildings would remain open for students wanting to come to campus and that lunch service would be provided. No one from the district returned a phone message left Thursday afternoon.

The Lead Hill School District is having a virtual day of instruction on Monday to conduct a vaccination event for employees, Superintendent Tami Richey said.

Richey said 26 workers plan to be vaccinated at the event out of 60 workers notified they could receive the vaccine, or 43%, totals that do not include the district's school nurse who has already been vaccinated.

"It's a personal decision for them," Richey said about workers deciding whether or not to get vaccinated Monday.

The Arkansas Center for Health Improvement reported Thursday that 175 school districts as of Monday had seen 50 or more new coronavirus infections per 10,000 residents over the previous 14 days. This is more than 70% of the 235 geographic school districts included in the center's analysis.

A week earlier, the center had reported 201 districts having such elevated levels of new infections.

At all colleges and universities in the state, active cases dipped to 613 on Thursday compared to 645 on Monday, according to the Health Department report. The University of Arkansas topped all colleges with 119 active covid-19 cases, down from Monday's total of 137 cases.