Healthy West on the rise 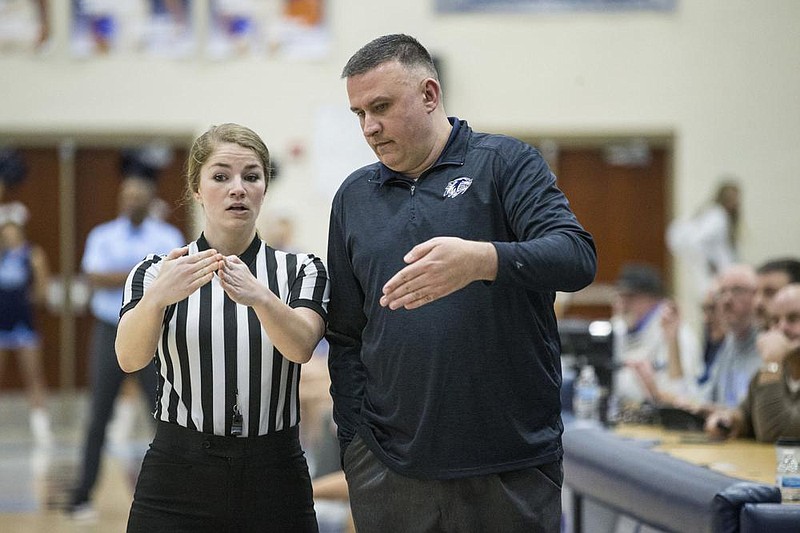 Bentonville West Coach Greg White said his team has “handled a lot of adversity” without its two leading scorers and starting point guard, but the Wolverines are on a three-game winning streak since their return. (NWA Democrat-Gazette file photo)

Bentonville West was without the trio of Riley Bucchino, Tucker Anderson and Evan White when it started 6A-West Conference play, and the result was an 0-2 start.

The Wolverines (10-7, 3-2) have turned things around since getting those three starters back, and the result is a three-game win streak going into tonight's game against Fort Smith Southside.

"The big thing is we have those players back," West coach Greg White said. "That is two of our leading scorers back and our starting point guard. Now we're getting back to what I thought we would be this season.

"We've handled a lot of adversity, but it's been fun to watch these kids. We still have a lot of work to do, and we have a trying two weeks coming up. We play Tuesday night at Bentonville, then we start the second half of conference play without any time off."

Buccino, who averages 17 points per game, had 21 to lead West to a 57-50 win at Springdale Har-Ber -- the first win over the Wildcats in school history. He was held to just three points in Tuesday's win over Rogers Heritage, but Anderson picked up the slack with 19 points and Dalton McDonald added 17.

"Had you told me Riley was going to have just three points against Heritage, I would have told you we were probably going to lose," White said. "What's been the most impressive thing about Riley is, in a world where kids like to chase numbers, he didn't take a bad shot, concentrated on defense and made sure he did the things we needed to win."

First-year Harrison coach Kristian Williams has warned her girls a number of times that there would come a game when the Lady Goblins wouldn't shoot the ball that well.

It took place Tuesday night as Harrison struggled with its shooting against Shiloh Christian, and the Lady Goblins used their defense to pull out a 44-43 victory to remain unbeaten.

"We definitely won the game with defense," Williams said. "We might have shot 20 percent. We would miss a shot, grab the rebound, then maybe miss again.

"I told our girls after the game that if they wanted to pad their rebound stats, they had to do it without giving me more gray hairs. But we found a way to win the game."

What Williams likes about the Lady Goblins is she has a very balanced attack. Harrison's top six or seven players are capable of being the leading scorer in any particular game.

Four players finished in double figures Tuesday as Claire Barger had 12, followed by Maggie Salmon with 11 while Brynn Oleson and Alex Hill added 10 apiece. Meanwhile, Sydney Shrum and Mariah Hudson, both of whom have contributed with scoring in other games, went scoreless.

"If you had told me in September we would have a game where neither Sydney nor Mariah scored a point, I would have said we were in trouble," Williams said. "But everybody has a different job on different nights, and the girls are buying into it and doing what it takes to win games.

"Coaching a team like this is a dream. We are very balanced, and that makes it a fun team to coach. They all share the same goal in mind, and every game we could have a different leader."

Playing a brutal non-conference schedule is paying off for Prairie Grove (8-6, 5-1), which has won seven of its past eight games.

"We were like everybody else in looking for games early," Prairie Grove coach Steve Edmiston said. "We played teams like Fayetteville, Siloam Springs, and Dardanelle, and we got beat pretty good in some games. But we wanted to test ourselves to get ready for conference and it's paid off so far. We're on a good run, but there's still a long way to go."

Prairie Grove will have to be at its best to survive a rugged three-game stretch that begins tonight at Berryville, which leads the East Division of the 4A-1 Conference. The Tigers will play at Shiloh Christian on Tuesday before returning home next Friday to face Farmington, which owns the tie-breaker with Prairie Grove atop the 4A-1 West Division.

Prairie Grove beat Huntsville 45-43 on Tuesday when senior point guard Sloan Smith made four clutch free throws down the stretch. The Tigers rely heavily on Smith, an experience player who broke into the starting lineup last year as a junior.

"Sloan is about 6-foot-3 or 6-4, so he's not your prototypical point guard," Edmiston said. "But he's doing the things we need from him. Sloan didn't have a really good game, offensively against Huntsville, but he made those four at the end to help us win the game."

Prairie Grove has been helped by the addition of five players from its football team, including Knox Laird and Landon Semrad, who've earned starting positions. Laird is a senior and former quarterback while Semrad is a junior and a wide receiver for the Tigers.

"Knox, he can play about anywhere and he's a leader," Edmiston said. "Landon brings a lot of athleticism to the team. We're trying to make the most of that potential."

Charleston is quickly making up for lost time after going from Dec. 11 to to Jan. 6 between playing games.

"That'll be six games in nine days," Charleston coach BJ Ross said. "That's a lot of basketball and we've got to be ready to go."

The Tigers got off to a good start by beating Booneville 64-53 in a 3A-4 Conference game on Tuesday. Brandon Scott and Brevyn Ketter scored 19 points apiece to lead a balanced scoring attack for Charleston. Dalton Curtis added 13 and Trenton Goodson 10.

Scott is averaging 24 points in conference play to lead the Tigers.

"So many teams focus on Brandon Scott and Trenton Goodson, our senior, and that gives our other kids an opportunity to step up," Ross said. "We had four sophomores on the court at times against Booneville and that's enjoyable to see. We got some really good play out of our sophomores and our defense did a good job of forcing Booneville to make deeper shots than they normally would."

Charleston was scheduled to play at Cossatot River Thursday night before facing Cedarville in a makeup game on Saturday.

Springdale Har-Ber enters its toughest three-game stretch of the season starting tonight, but the Lady Wildcats have prepared for this, said third-year coach Kim Jenkins.

Har-Ber (5-4, 3-1 6A-West) is sitting in second place behind league-leading Bentonville heading into tonight's road game at Rogers High (11-5, 3-2). The Lady Wildcats will take on Fayetteville and Bentonville next week.

"We played a tough nonconference schedule so we think we're ready," said Jenkins. "We're ready to be competitive."

Har-Ber did not play Tuesday night after Fort Smith Southside's team was dealing with covid-19 issues.

The Lady Wildcats have ridden the red-shot scoring of junior guard Caylan Koons in the past week. Koons scored 31 and 37 points in games last week and recently eclipsed the 1,000 career-point mark.

Jenkins praised the court awareness of her guards for getting the ball to Koons at the right time.

"I think our guard play has been really good as far as finding her," Jenkins said. "So she's getting some really good touches. The past couple of games we've been able to essentially play two point guards at the same time and they are just doing a good job of finding her in transition, and Caylan has really done a good job to know when she's open and to pull the trigger."