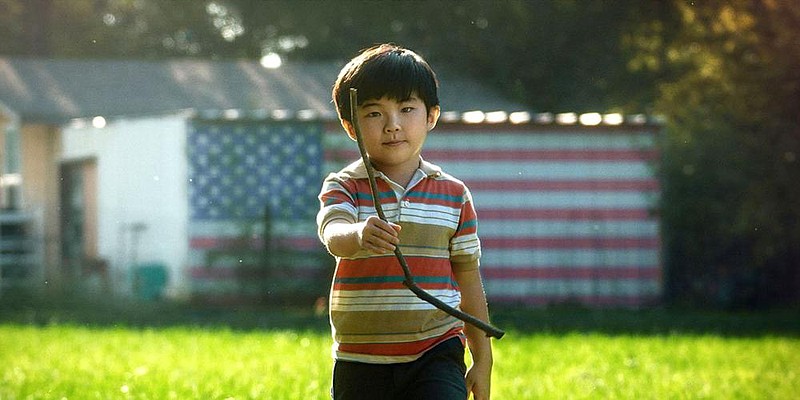 For the past decade or so, we've ushered in the new year with reflections on the just past year in movies by friends of the section -- critics, cinephiles and filmmakers with Arkansas connections. This past year was obviously a little different, and the Oscars and a lot of critics' groups have pushed back their voting deadlines and are allowing films released in January and February of 2021 to be considered 2020 films for purposes of voting.

[Video not showing up above? Click here to watch » https://www.youtube.com/watch?v=lcflWo8wYC4]

This week's Top 10 list from Philip Vandy Price, a fellow SEFCA member who regularly publishes his reviews at Reviews From a Bed (reviewsfromabed.com), and is the once and presumably future host of the Youtube movie review show "Initial Reaction."

10.) "Summerland" -- As a sucker for these small, stuffy little British dramedies it's possible my pick comes with a certain amount of preference, but the film honestly caught me off guard with how much it affected me on an emotional level. Set during World War II, the film follows an Englishwoman, Alice Lamb (Gemma Arterton), as she opens her heart to an evacuee after initially resolving to get rid of him in this deceptively simple wartime drama/romance that deals in life and whether the risks taken and heartbreak endured along the way were worth the moments of magic.

9.) "The Invisible Man" -- Most frightening as a critical look at manipulation in a relationship and the power this allows not only for one person to have over another, but how this sense of control manifests in others' perception of who you are: leaving Elisabeth Moss' character in particular with large amounts of self-doubt and a severe lack of trust. "While it might not break any new ground as far as story or scares go, it does what it intends so well that it's difficult to deny the effectiveness of the monster or the message.

8.) "Mangrove" -- Astonishing, breathtaking, and all the adjectives that might hope to accurately describe the greatness that can't truly be captured with words, Steve McQueen's "Mangrove" chronicles the first judicial acknowledgment of behavior motivated by racial hatred within the Metropolitan Police. The film is every bit as much a call for justice as it is a commentary on the explicit inequalities of the world. Despite being one part of a larger series, "Mangrove" conveys its vitality with the quality and skill of any other Steve McQueen film. The cast is first-rate, the period detail is on point, but it's the antithetical tone of the environment within the Mangrove restaurant that populates the first half of the film and the tone inside the courtroom throughout the second half of the film that is most effective in defining McQueen's central thesis which is more a question of why it's so hard for those with all to make room for those with less.

7.) "The Vast of Night" -- Drawing inspiration from the likes of "The Twilight Zone" and '50s science fiction staples like "Invasion of the Body Snatchers," "The Vast of Night" unfolds over a single night as town folks root for the home team at a high school basketball game, while our two brainy leads, radio DJ Everett (Jake Horowitz) and switchboard operator Fay (Sierra McCormick), band together to track down strange, unidentifiable noises, arguing about whether they're alien or not. Director Andrew Patterson's audacious debut displays impressive control over his narrative, his characters, and his camera while what's most impressive is the film's ability to deal in the sorrows of loss and the mythical and mysterious places our minds can take us to in our loneliness.

6.) "Palm Springs" -- The feature directorial debut of Max Barbakow is best viewed with no idea whatsoever as to what it's about. Given this arrived on Hulu in July you may have heard a thing or two. Despite what you may or may not think of the central "gimmick" Barbakow and screenwriter Andy Siara use it in such a fresh and exciting fashion that the film not only conveys the grounded and sobering themes it takes on in an effective fashion, but also delivers as a whole a more well-balanced and genuinely heartfelt film than some of these year-end dramas whose entire purpose is as much.

5.) "Dick Johnson Is Dead" -- Made in order to relieve if not necessarily alleviate Dick's fear of death and his daughter's fear of losing him, "Dick Johnson Is Dead" may very well be the most moving film I saw all year. Filmmaker Kirsten Johnson seems to have wanted to make a film about her father who had been diagnosed with dementia, and tackle conversations with him about his decline and death, while also celebrating his life, all before he was too far gone. It is in the ever-evolving approach and the fact it's presented with as much transparency and candor as death itself that Johnson's inventive portrait succeeds in keeping a piece of her father alive forever.

4.) "Nomadland" -- Chloé Zhao's film chronicles a year in the life of a woman whose world is dying and her journey to discover a new one. Zhao's stylistic approach is one that requires a certain level of patience and attention, but as with most things that are worth investing time and effort in if one is able to give those things over to the film completely, what it delivers is more than a rewarding experience -- it's a cathartic one. The film creates this sense of grand discussion and deep reflection while appearing to be as mundane an artistic endeavor as the people it chronicles. Francis McDormand's performance is as reassuring as ever, but it's these portraits Zhao paints of those the grind has forgotten that give the film a sense of hope without ever romanticizing its notions.

3.) "Bad Education" -- Briskly paced and increasingly engaging with every turn, "Bad Education" is a cautionary tale of people with genuine ambition who take real initiatives to implement plans on top of plans to present how successful they are only to convince themselves they deserve more than their annual salaries allow. It's about people attempting to validate themselves within a system that inherently minimizes their overall contribution to the world. "Bad Education" is both a testament to the unsung heroes of the education system and a call to hold those in positions of power responsible for the power they've been granted. What makes the film so satisfying though, is that it somehow manages this balance in an even fashion by becoming a character study of the multi-faceted superintendent Frank Tassone as portrayed by Hugh Jackman.

2.) "Sound of Metal" The story of Ruben (Riz Ahmed) is a very human, very grounded, and largely -- a very cleansing one but as presented through this veritable style of director Darius Marder and co-writer Derek Cianfrance, Ruben's tale takes on what feel like mythic qualities ... turning it into more than just a story, but a parable. While not your traditional parable as told by Jesus in the Gospels, "Sound of Metal" is a rawer approach to that age old serenity prayer that people repeat to remind themselves of the influence they have over the occurrences in their life on earth. In the film, Ruben comes face to face with a reality he can neither control nor accept. As he's a drummer for a two-piece metal band seemingly on the cusp of bigger and better things the sense of sound is one of the most critical aspects of Ruben's life. Ruben runs headfirst into the question of how does one preserve the hearing they have left when they can't preserve themselves without it? The rest of "Sound of Metal" explores as much and presents both a completely devastating yet strangely calming experience around Ruben's plight.

1.) "Minari" -- Based largely on writer/director Lee Isaac Chung's own experiences of being of Korean descent and moving to middle-of-nowhere Arkansas in the 1980s in order for his family to start anew and his father to start a farm, "Minari" is a very personal story and therefore undoubtedly includes what must be several specific details that transport Chung back to what he likely remembers as a very brief, but meaningful time in his life. Chung's screenplay and eventual film make sure to include a very specific level of detail while never zeroing in on any of these ultimately allowing the cumulative effect to relay why "Minari" is not only a story of the American experience as seen through the lens of Korean heritage, but simply a story of the American experience, maybe even the most American of experiences.