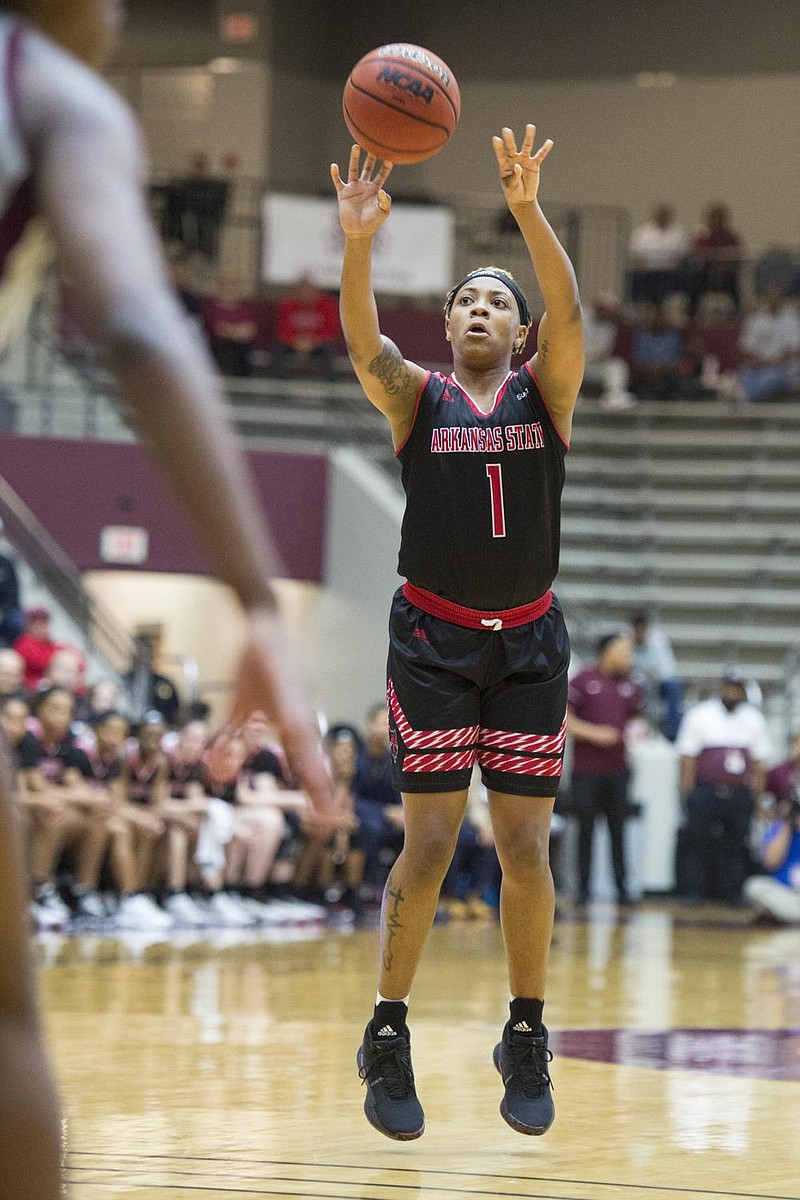 Jireh Washington has blossomed in her junior season, leading the Arkansas State women with 12.4 points and 4.5 rebounds per game. (Democrat-Gazette file photo)

"I had to get adjusted to the system," Washington said. "Coach has trusted me to run his system the way that I should run it, and I've gained a confidence. It's given me motivation everyday because he's got trust in me and he trusts me to get the work done."

Washington has blossomed in her junior season, leading the Red Wolves with a team-high 12.4 points to go with 4.5 rebounds per game. In Washington, ASU has a lead guard who is growing into her game, and one who has gained a grasp of the system in Daniel's second season, helping place the Red Wolves atop the Sun Belt's West Division.

"She's growing up," Daniel said. "She's just maturing and handling that better. She's getting better with every bounce."

A key difference in 2020-21 has been the communication between Washington and Daniel. As a sophomore, she spent much of the year attempting to adjust to the offense Daniel was implementing, only beginning to gain comfort at the end the season. As a junior, she knows the offense, and has also developed a relationship with Daniel that has given each a level of confidence and understanding that is paying off for ASU.

"It took time to build trust," Washington said. "It takes a while for a player and a coach to gain trust for one another. I trust him."

With Washington hitting her best form since arriving to the Red Wolves, ASU has a veteran guard it can lean in in conference play as the Red Wolves aim to sustain the early momentum they've built in January.

"She's been through [the Sun Belt] and knows what it looks like," Daniel said. "She's wanting to get better. She's more thirsty and hungry to strive and elevate her game."

There was disappointment among Dawn Brown's staff when both of the Golden Lions' upcoming games against Texas Southern and Prairie View A&M were postponed Thursday. But with impact players ShiCoriya Orr and Takayln Busby set to return for UAPB, Brown views the time off as a chance for the pair to settle back in and for her team to regroup.

"I think this gives us an opportunity to get these two back in the flow of things," Brown said. "This gives us a chance to focus on ourselves a bit more."

UAPB (2-9, 1-4 Southwestern Athletic Conference) has dropped four consecutive games since a conference-opening win over Mississippi Valley State on Jan. 2. The loss of guard Joyce Kennerson to a season-ending injury has left the Golden Lions without a proven guard. As a result the team has lost by an average of 12 points in her absence.

With the return of Orr and Busby, Brown has a pair of guards to insert in Kennerson's place. And with the pair of postponements, UAPB's head coach now also has time to work the pair back into her team before the Golden Lions travel to Grambling State on Jan. 30.

"We've been struggling offensively,"Brown said. "With them back, it gives us more offensive looks on the perimeter."

Without its starting point guard, and with no true replacement on the roster with sophomore Lewis McDaniel also injured, UCA (3-10, 2-3 Southland Conference) was left without a proper rudder.

"The natural flow of our offense is changed," Coach Anthony Boone said. "We were able to play a pretty good pace with DeAndre."

In Jones' place at the point now is leading scorer Rylan Bergersen. The senior transfer from BYU, who is averaging 17.8 points per game, has filled in well running the offense, but his scoring output has suffered in the role, and the Bears have suffered with it; UCA has lost three-straight since Jones' season-ending injury.

"Playing at point guard and having to enter the offense, it's a bit more difficult for [Rylan] to get the same looks he had before," Boone said.

With 6-7 junior Eddy Kayouloud the only other alternative at point guard, the Bears may have to ride with Bergersen through the end of the season, placing a cap on their top scorer and the team's overall offensive potential with it.

When Texas State postponed Arkansas State's visit on Jan. 8-9 due to covid-19, it gave the Red Wolves (5-6, 2-2 Sun Belt Conference) 13 days between games from Jan. 2-15. It also meant the Red Wolves -- who were swept by Louisiana-Monroe on Jan. 1-2 -- would get an immediate rematch with the Warhawks the following weekend beginning Jan. 15.

With nearly two weeks to prepare for Louisiana-Monroe, ASU focused on its offensive tempo to attack the Warhawks as Coach Mike Balado prepped his team to inbound the ball in three seconds or less and wanted them to push the pace in transition. Two weeks after dropping a pair of games to the Warhawks, the Red Wolves swept Louisiana-Monroe last weekend, outscoring the visitors 167-144 in the pair of games

"We really emphasized pace of play and I thought that was something we did very good on both nights," Balado said. "I really think it wore them down a little bit."

The University of Central Arkansas (3-9, 1-3 Southland Conference) needed a win last weekend, and junior Lucy Ibeh helped get them one, scoring 31 points and pulling down 16 rebounds in the Sugar Bears' 56-42 victory over Nicholls State on Saturday. A transfer from Collin College in Texas, Ibeh has delivered sweet performances on and off the court since arriving in August.

In her short time in Conway, the forward from Nigeria has emerged as a prominent figure for the Sugar Bears.

"She's a true leader," Coach Sandra Rushing said."She's very mature. They call her the momma of the team."

Ibeh lived up to the nickname this week when she baked a birthday cake for UCA twins Briana and Ayanna Trigg for the team to share.

On the court, with point guard Jalisa Outlaw out for the season due to injury, the Sugar Bears are leaning on Ibeh. Her poise and power in the paint have given a struggling UCA team a beam of light on offense, and the first-year transfer may hold the key to turning things around for the Sugar Bears.

"With her size, she can create her own shot," Rushing said. "She's a tremendous athlete and someone we can really rely on."