Biden cancels project revived by Trump; Canadians to object by Compiled by Democrat-Gazette Staff From Wire Reports | January 21, 2021 at 2:00 a.m. 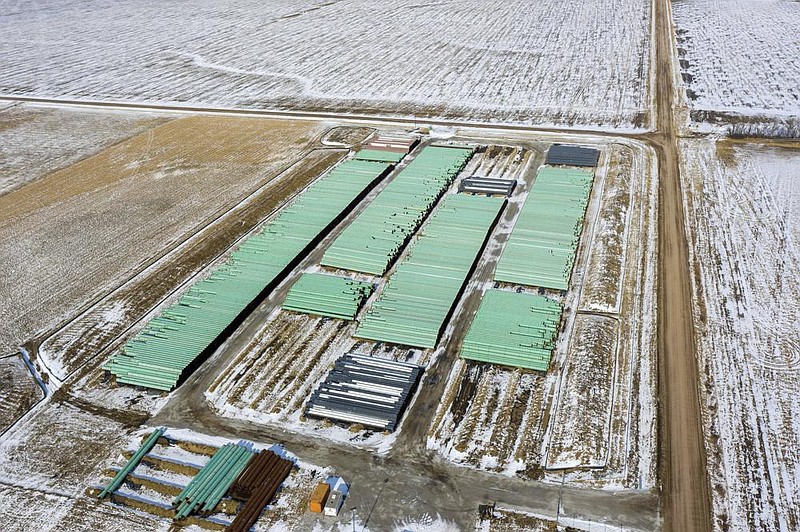 Pipe to be used for the Keystone XL oil pipeline is stored in a field near Dorchester, Neb., in December. The Canadian company behind the pipeline said Wednesday it has suspended work on the project. (AP/Omaha World-Herald/Chris Machian)

OTTAWA, Ontario -- One of President Joe Biden's first acts upon taking office was to cancel the permit for the Keystone XL pipeline, the long-debated project to transport crude from Canada's oil sands to the United States.

But Prime Minister Justin Trudeau and elected officials in Alberta, the Canadian province where the pipeline originates, are not giving up so fast.

The nearly 1,200-mile Keystone XL was intended to carry crude oil from Canada to Nebraska, where it would connect with a network to deliver the crude to refineries on the Gulf of Mexico.

In canceling the pipeline, Biden took some of his first steps toward reversing the legacy of the Trump administration, which revived the project after it was rejected by President Barack Obama in 2015.

Trudeau has long supported the pipeline as part of his effort to balance his priority to fight climate change with supporting Canada's energy industry in Alberta and in other western provinces.

[Video not showing up above? Click here to watch » https://www.youtube.com/watch?v=vRSFCoZHOU0]

Even before Biden's announcement, the premier of Alberta sent out a statement saying he was going to object to it, and vowing legal action.

"This is about more than just Keystone XL," said the premier, Jason Kenney, an often fierce Conservative critic of Trudeau's Liberal government. "This is about the Canada-U.S. relationship, this is about tens of thousands of jobs here, this is about billions of dollars of revenue for governments to pay for things like health care."

Canada exports about 80% of its oil to the United States, most of it pulled from the oil sands, which, along with the energy industry, are critical to Alberta's economy. Even during the current oil price slump, the sector provides about 140,000 jobs and, before the collapse of oil prices, royalties from the oil and gas industry made up about 20% of Alberta's budget.

Some of the pipe for the project has been made at large-diameter pipe mill that sits on a 740-acre site within the Port of Little Rock. It is operated by Welspun Tubular LLC with a workforce, as of last summer, of more than 500 people.

It was unclear Wednesday how much of the order Welspun has produced so far or what impact the president's decision will have on the workforce. Company officials didn't immediately return telephone calls seeking comment.

The executive order was a topic of at the first monthly meeting of 2021 for the Little Rock Port Authority.

"We did talk a little bit about that," said Bryan Day, the port's executive director. If the pipeline is canceled "it would definitely impact Welspun, our industry partner, and by nature of that, it would impact the port in terms of rail car use and barge use," Day said.

Day said an unknown amount of pipe likely already has been produced, but the company has weathered setbacks in the past.

The oil industry had pushed for development of the pipeline in hopes that a direct route to the Gulf of Mexico, where refineries are equipped to process the heavy, low-grade oil from the oil sands in Canada's interior, would eliminate shipping bottlenecks and lower prices, said Andrew Leach, an energy and environmental economist at the University of Alberta in Edmonton.

But the project was heavily opposed by environmentalists, American farmers and ranchers, as well as American Indian groups who feared it would alter and possibly harm their lands.

"President Biden's decision to reject Keystone XL on his first day signaled a new era," said Anthony Swift, the director of the Canada Project at the Washington-based Natural Resources Defense Council, an environmental group long critical of the oil sands.

"New fossil fuel development projects are going to be placed under some sort of a climate test that assesses whether these projects are consistent with our international climate goals," Swift added.

In a statement issued Wednesday before Biden took the action, TC Energy, the company that owns Keystone, said that it was disappointed by Biden's choice and that it would suspend work on the pipeline while it considered its options.

The cancellation will "lead to the layoff of thousands of union workers and negatively impact groundbreaking industry commitments to use new renewable energy as well as historic equity partnerships with Indigenous communities," the company said.

Information for this article was contributed by Ian Austen of The New York Times and by Noel Oman of the Arkansas Democrat-Gazette.