Sills goes on attack for Hogs 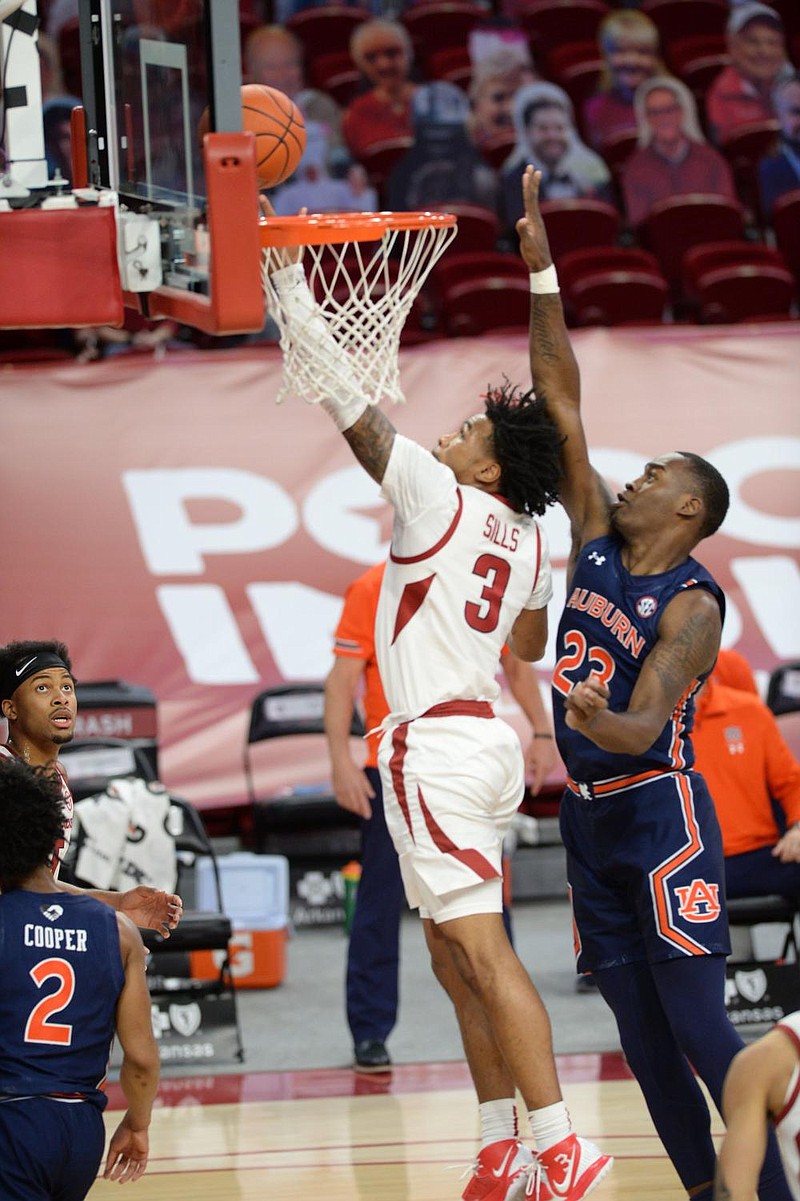 FAYETTEVILLE -- Desi Sills was feeling it again Wednesday night, driving hard to the hole, drawing fouls and making the kind of hang-in-the-air shots for which he has made a name at the University of Arkansas.

Sills scored 22 points, one shy of his career high, to lead the Razorbacks to a 75-73 win over Auburn at Walton Arena.

Sills shot 7 of 12 from the floor and made 8 of 10 free throws in 32 minutes to help the Hogs snap a two-game losing streak.

The 6-2 junior from Jonesboro was in a shooting slump and had scored in double figures just once since putting up his career-high 23 points on the Tigers in a 97-85 Arkansas win in the SEC season opener Dec. 30.

"Coming into this game I just felt like I had to attack it," Sills told the SEC Network. "The last couple of games I wasn't myself. So my teammates uplifted me and told me to get to the rim. That's what I'm known for and I got to the rim with ease and I started feeling it."

[Video not showing up above? Click here to watch » https://www.youtube.com/watch?v=SeuCq_CKsSg]

One of Sills' free throws was a gift, as an Auburn player entered the lane early with 2:40 remaining on a miss. Sills sank his second try to give Arkansas its largest lead at 74-66.

Sills' aggressive play was best exemplified by a dribble-drive through the lane against Allen Flanigan on which he got bumped, did a spin move and got hit by JT Thor on his way up. He scored the basket, was fouled and made the free throw.

"We ran a lot of plays for Desi tonight, and he did a good job of delivering," Arkansas Coach Eric Musselman said. "I thought he did a great job attacking the rim."

Arkansas recovered from a 19-point first-half deficit to sweep the Tigers. That is believed to be the largest Razorback comeback in a victory at Walton Arena, though Arkansas does not keep that record.

Arkansas overcame an 18-point deficit to edge Alabama 65-63 on Feb. 21, 2006, in what is believed to be the largest previous comeback.

The Razorbacks recovered from a 21-point deficit in the second half to down Arkansas State 67-64 in overtime at Barnhill Arena in the 1987 National Invitational Tournament.

Arkansas deployed a lot of double teams on Auburn point guard Sharife Cooper just to get the ball out of the creative freshman's hands, particularly in the second half.

The move slowed Cooper's production and forced his Auburn teammates to pick up the slack. They did not in the second half, when the Tigers shot 9 of 31 (29%) and were outscored 44-30.

"We take the ball out of his hands and make the nonfactors make plays, and I feel like we did that well tonight," Arkansas guard Desi Sills told the SEC Network.

Cooper had a season-low four assists while scoring 25 points on 9-of-19 shooting.

"Arkansas turned up the defensive pressure, made it really difficult on us," Auburn Coach Bruce Pearl said. "They trapped Sharife, and the other guys, when the ball was not in his hands, struggled to make plays and make some decisions.

"And so, spacing, ball movement, but you know we hadn't seen that that much. It shouldn't have bothered us, but it did."

Jaylin Williams gave Arkansas its first lead at the 13:26 mark of the second half on a spectacular play to cap an 18-4 run.

Desi Sills drove the paint, and his one-handed runner appeared to get tipped and was floating about a foot away from the rim. Williams swooped in with his right hand and redirected the ball straight through the hoop to make it 49-47 Arkansas.

Auburn sliced a 74-67 deficit by four points with the Razorbacks never getting the ball out of their front court.

The Tigers' JT Thor made one of two free throws but turned point guard Davonte Davis over in the press, and Allen Flanigan drew a shooting foul against Jaylin Williams. Flanigan made just 1 of 2 free throws as well, but Thor stole the ball from Davis again. Thor missed his driving layup try, but Sharife Cooper was there for the put-back to cut Auburn's deficit to 74-71 in the span of 15 seconds.

Auburn Coach Bruce Pearl said the Tigers would not duplicate the 15 made three-point shots they hit in falling to Arkansas on Dec. 30, and he was right.

The Tigers made 7 of 23 (30.4%) three-point shots, including the first two of the season from junior Javon Franklin (Little Rock Parkview).

Auburn guard Sharife Cooper, who had been 1 of 16 on three-point shots, doubled his season total by going 2 of 6 from beyond the arc.

JD Notae made his first start as a Razorback, joining the backcourt of Moses Moody and Jalen Tate. Connor Vanover was back in the starting lineup with Justin Smith on the front line.

Moody and Tate have started all 15 games, while Vanover started his 13th.

Jaylin Williams and Desi Sills started the second half in place of Vanover and Notae and both played 20 minutes.