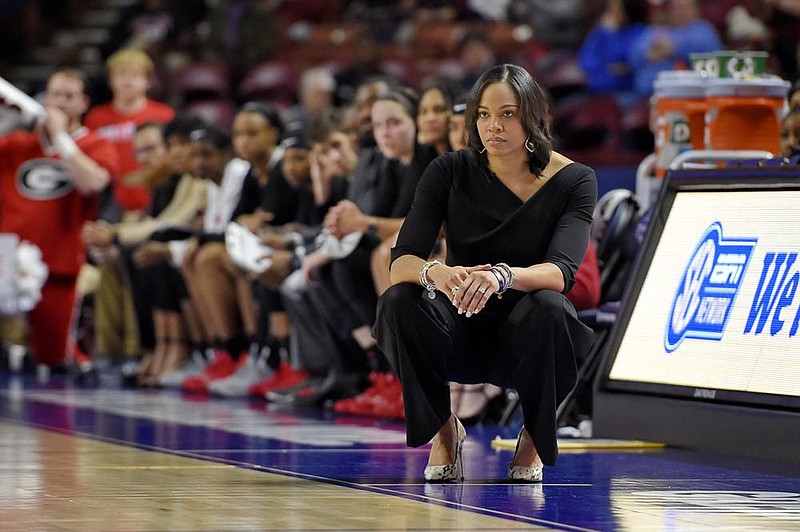 Georgia Coach Joni Taylor has led the Bulldogs to a 12-1 start, including 4-1 in SEC play. The No. 22 Bulldogs take on No. 4 South Carolina tonight. (AP/Richard Shiro)

Georgia is back in The Associated Press Top 25 for the first time since the 2018-19 season, but staying there will be a challenge.

The No. 22 Bulldogs (12-1, 4-1 SEC) take on No. 4 South Carolina tonight in a game that was rescheduled from Jan. 7 because of covid-19 issues within the Gamecocks program.

Georgia is among seven SEC schools ranked in this week's poll, and eight teams in the NCAA Tournament projection from ESPN's Charlie Creme.

Georgia was a power under longtime coach Andy Landers, who took his team to the NCAA Tournament 31 times in 33 years. He reached the national championship game twice and the Final Four five times.

Landers retired in 2015 with a record of 862-299, turning the program over to Joni Taylor, who had been his top assistant.

While Georgia has had some success over Taylor's first five seasons -- most notably a 26-7 mark in 2017-18 -- the Bulldogs have made only two NCAA Tournament appearances and managed a single postseason victory under Taylor.

Taylor told The Associated Press that she believes the program is ready to regain its spot among the country's elite.

"Year six may seem like a long time, but in the cycle of recruiting it's not a long time at all," Taylor said. "We were very intentional about who we wanted to bring into our program. We know what we want to look like, and we're not going to settle for anything that takes us away from that. This year, you're finally seeing a glimpse of what our vision is and how we want to play basketball."

The Bulldogs have won four in a row since falling to Mississippi State on Dec. 31, but now have the Gamecocks and No. 15 Arkansas back to back.

"That's the SEC," Taylor said. "You can go on and on down the schedule. We've not done anything yet. Yeah, we've won a game here and there, but we're still climbing the mountain."

Texas A&M came back strong from its first loss of the season to knock off Mississippi State.

The Aggies scored the first five points of the game and never trailed in snapping a seven-game losing streak to the Bulldogs. It's their first win over Mississippi State since the 2015-16 season.

This week marked the 10th anniversary of "We Back Pat" week, which will close with the Tennessee-UConn matchup tonight in Thompson-Boling Arena. The weeklong initiative focuses on raising awareness of Alzheimer's disease and the Pat Summitt Foundation's role in fighting it.

Legendary Tennessee women's basketball coach Pat Summitt announced her diagnosis of early onset dementia, Alzheimer's type, in August 2011. The 2011-12 season, her last as head coach, marked the start of "We Back Pat" week. She died on June 28, 2016, at the age of 64.

During the week of Jan. 14-21, SEC schools will offer support to the foundation during each of their 18 women's basketball home games in 14 cities through a variety of efforts including promotional public address announcements and video endorsements.

Among the progress made in the past decade is the Pat Summitt Clinic, which opened in 2016 at the University of Tennessee Medical Center and focuses on patient care and research.

Georgia's 67-66 win over Tennessee last Thursday was its first in Knoxville since 1996. Lady Vols Coach Kellie (Jolly) Harper was a player for Pat Summitt back then.

The Bulldogs outscored Tennessee 29-9 in the third quarter to rally from a 15-point halftime deficit. It was the first win in 15 games in Knoxville for Georgia.

Kentucky held off Vanderbilt 80-73 on Sunday in a game where both teams were missing players.

The Wildcats were missing five, including reigning SEC Player of the Year Rhyne Howard, because of an ankle injury. The Commodores had only seven varsity players available because of injuries, covid-19 issues and opt-outs.

Vanderbilt, who would choose to end its season a day later, led 69-65 with 5:04 left in the fourth quarter. Kentucky responded with a 9-0 run to regain the lead and go on for the victory.

She registered her eighth double-double of the season. The Tigers had just eight scholarship players and a walk-on available for the game after a week that saw two games postponed due to covid-19 protocols.

Florida's Lavender Briggs earned SEC player of the week honors after scoring 41 points in a loss to Arkansas. The 6-1 sophomore from Provo, Utah, scored the most by an SEC player this season in a game against the Razorbacks. Briggs added 18 in the Gators' win over Auburn on Sunday.

Georgia's Sarah Ashlee Barker played one of the best games of her career during Sunday's win against Ole Miss to earn the league's freshman of the week honors. Barker scored 11, including 3 three-pointers, and added 2 steals and 2 assists.

From top to bottom

NOTE The NCAA instituted this season for women's college basketball, a rating system called the NET Rankings, which took the place of the Ratings Percentage Index. An acronym for NCAA Evaluation Tool, the NET rankings take into account game results, strength of schedule, game location, scoring margin, net offensive and defensive efficiency and the quality of wins and losses.

The teams will meet for the 24th time, but the first in 15 years in Knoxville. The Huskies won 60-45 in Hartford last season. Connecticut Coach Geno Auriemma passed former Lady Vols coach Patt Summitt on the all-time victory list with No. 1,099 on Tuesday night.

7 Players available for Vanderbilt in Sunday's loss at Kentucky

24,653 Attendance the last time Tennessee took on Connecticut in Knoxville

3 Points scored by Mississippi State in the first quarter against Texas A&M, a school-record low 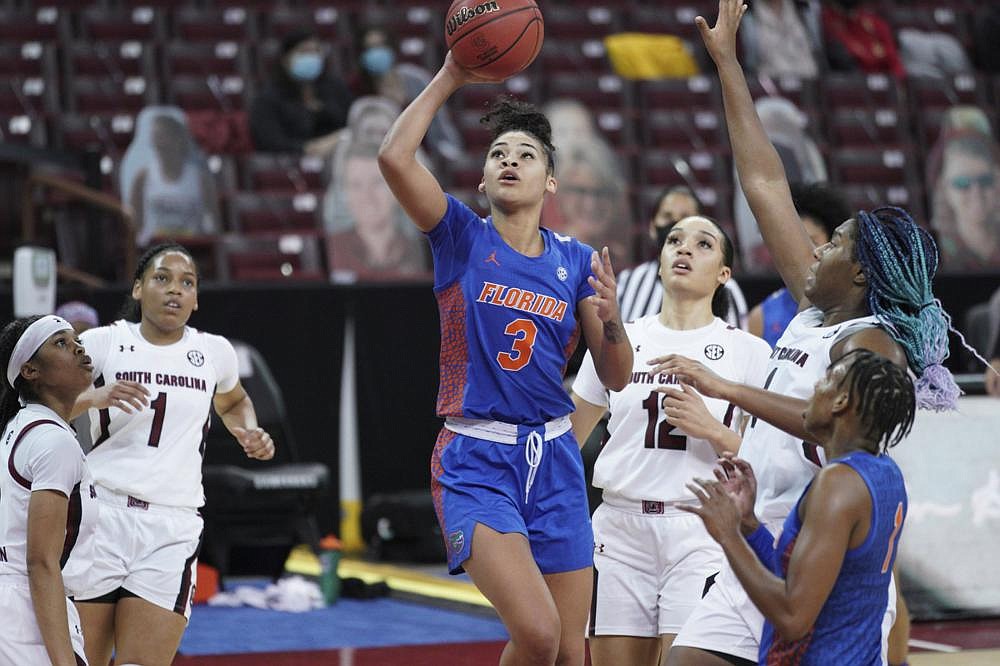 Florida sophomore Lavender Briggs (3) scored 41 points against Arkansas and 18 against Auburn. She was named the SEC player of the week. (AP/Sean Rayford)