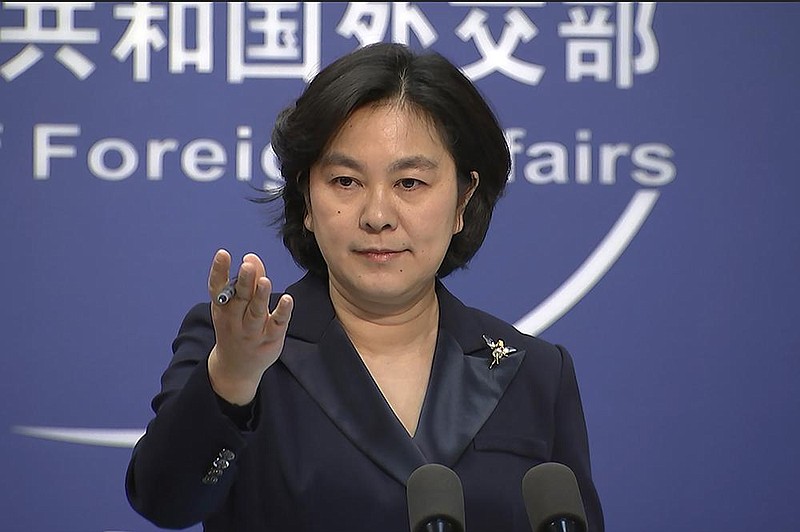 BEIJING -- China's Foreign Ministry described outgoing U.S. Secretary of State Mike Pompeo on Wednesday as a "doomsday clown" and said his designation of China as a perpetrator of genocide and crimes against humanity was merely "a piece of wastepaper."

The allegations of abuses against Muslim minority groups in China's Xinjiang region are "outright sensational pseudo-propositions and a malicious farce concocted by individual anti-China and anti-Communist forces represented by Pompeo," spokesman Hua Chunying told reporters at a daily briefing.

"In our view, Pompeo's so-called designation is a piece of wastepaper. This American politician, who is notorious for lying and deceiving, is turning himself into a doomsday clown and joke of the century with his last madness and lies of the century," Hua said.

Pompeo's announcement Tuesday doesn't require any immediate actions, although the United States must take the designation into account in formulating policy toward China. China says its policies in Xinjiang aim only to promote economic growth and social stability.

[Video not showing up above? Click here to watch » https://www.youtube.com/watch?v=NcY0zu_sqjg]

The U.S. has previously spoken out and taken action on Xinjiang, implementing a range of sanctions against senior Chinese Communist Party leaders and state-run enterprises that fund repressive policies in the vast, resource-rich region. Last week, the Trump administration announced it would halt imports of cotton and tomatoes from Xinjiang, with Customs and Border Protection officials saying they would block products from there suspected of being produced with forced labor.

Many of the Chinese officials accused of having taken part in repression are already under U.S. sanctions. The "genocide" designation means new measures will be easier to impose.

Tuesday's move is the latest in a series of steps the outgoing Trump administration has taken to ramp up pressure on China over issues including human rights, the coronavirus pandemic, Taiwan, Tibet, Hong Kong and the South China Sea.

China has imprisoned more than 1 million people, including Uighurs and other mostly Muslim ethnic groups, in a vast network of prison-like political indoctrination camps, according to U.S. officials and human-rights groups. People have been subjected to torture, sterilization and political indoctrination in addition to forced labor as part of an assimilation campaign in a region whose inhabitants are ethnically and culturally distinct from the Han Chinese majority.

The Associated Press reported on widespread forced birth control among the Uighurs last year, including the mass sterilization of Muslim women, even while family planning restrictions are loosened on members of China's dominant Han ethnic group.

China has denied all the accusations, but Uighur forced labor has been linked to various products imported to the U.S., including clothing and electronic goods such as cameras and computer monitors.

Others covered by the sanctions include Trump's economic adviser Peter Navarro; his top diplomat for Asia, David Stilwell; health and human services secretary, Alex Azar; along with former national security adviser John Bolton and strategist Steve Bannon. The sanctions are largely symbolic but underscore Beijing's antipathy toward a U.S. administration it regarded as hostile.

"Over the past few years, some anti-China politicians in the United States, out of their selfish political interests and prejudice and hatred against China and showing no regard for the interests of the Chinese and American people, have planned, promoted and executed a series of crazy moves which have gravely interfered in China's internal affairs, undermined China's interests, offended the Chinese people, and seriously disrupted China-U.S. relations," the foreign ministry said in a statement.

Information for this article was contributed by Dake Kang and Matthew Lee of The Associated Press. 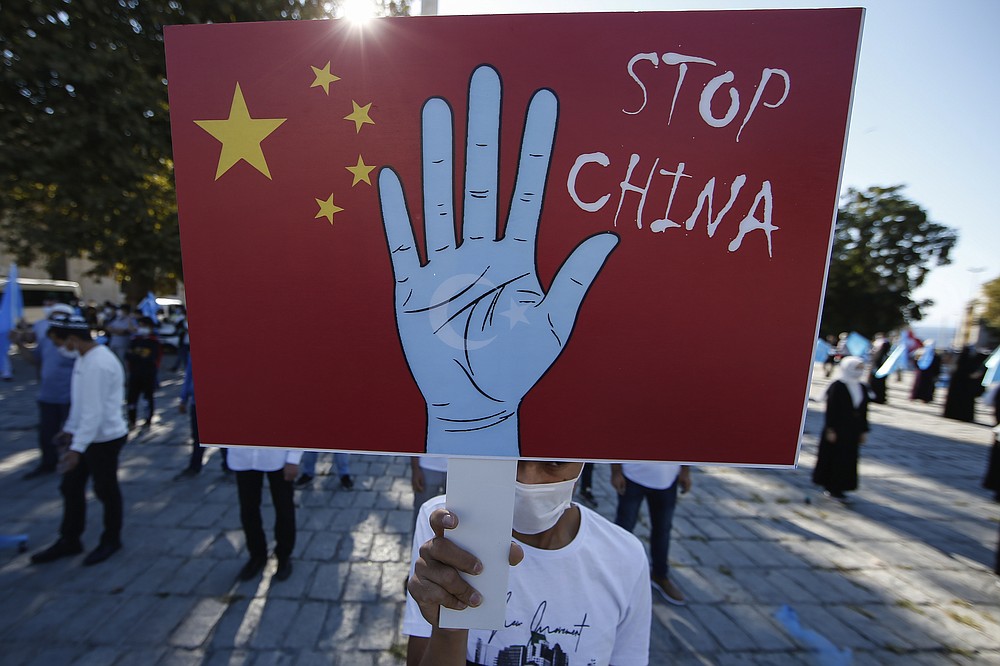 FILE - In this file photo taken Thursday, Oct. 1, 2020, a protester from the Uighur community living in Turkey, holds an anti-China placard during a protest in Istanbul, , against what they allege is oppression by the Chinese government to Muslim Uighurs in far-western Xinjiang province. The accusation of genocide by U.S. Secretary of State Mike Pompeo against China touches on a hot-button human rights issue between China and the West. (AP Photo/Emrah Gurel, File)
ADVERTISEMENT