Vote by Little Rock board passes revised rules on scooter-riding 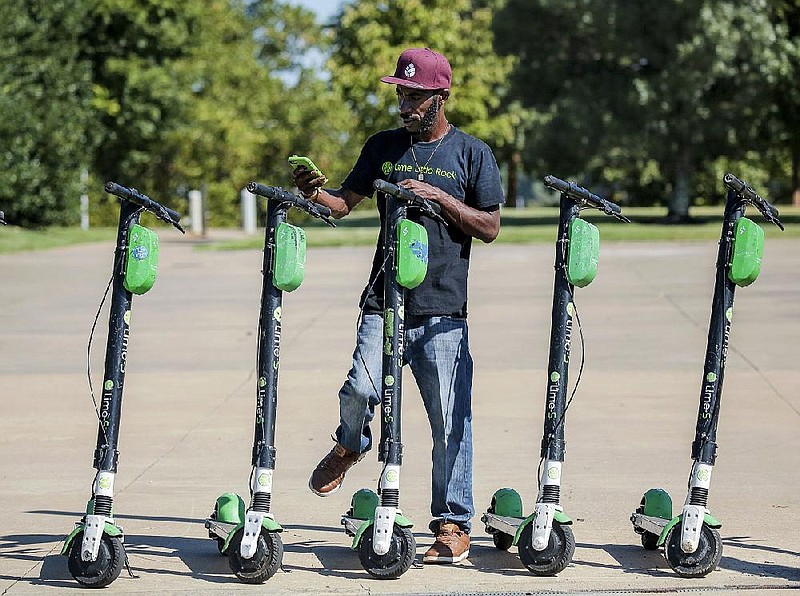 Jimmy Williams, an employee of Lime Electric Scooters, checks the condition and software of some of the ubiquitous green scooters in downtown Little Rock in this Tuesday, Oct. 1, 2019, file photo.

The Little Rock Board of Directors on Tuesday approved an ordinance revising rules of the road for the dockless electric scooters from technology firm Lime, and for other shared-scooter operators seeking a presence in Little Rock.

Mayor Frank Scott Jr. on Dec. 8 vetoed a previous version of the ordinance that board members had approved last year. As explanation for his veto, the mayor described safety restrictions city directors had added to the ordinance as heavy-handed.

During a board meeting Tuesday evening, the ordinance passed in a 6-4 vote.

The revised version left out two elements Scott found objectionable: a geographic restriction for scooters based upon zoning, and a requirement for scooter companies to furnish or approve helmets for riders younger than 18.

A state law passed in 2019 opened localities to shared-scooter companies and allowed for regulation of the devices by local authorities.

After Little Rock City Attorney Tom Carpenter indicated state law does not allow cities to vote up or down on the presence of scooters, at-large City Director Dean Kumpuris said he could not in good conscience accept money in the form of fees placed on scooter companies for something he believed was "basically unsafe."

In response to Kumpuris' concerns, at-large member Antwan Phillips said he would vote to support the measure, explaining, "I do not want our city to legislate on the parade of horribles."

"There are so many things that we recognize in life that [come] with some danger and we accept them to push society forward," Phillips said. "And I don't want our city to be thought of as a city that is behind the times because we are afraid of the parade of horribles."

The newly approved ordinance adjusts where riders can travel on the scooters.

Currently, scooters must travel on the sidewalk, but the ordinance approved Tuesday restricts riders to the street and says they must travel in a bicycle lane where one is available.

However, the ordinance allows riders to travel on the sidewalk in certain areas approved by city officials where sidewalk-riding has been indicated with signs.

Since last year, Scott has pressed city directors to approve the ordinance revising rules for scooters because of the revenue-generating provisions contained in the measure.

A $10,000 franchise fee will be assessed annually on dockless-scooter companies seeking to do business in the city. The ordinance also places a $75 licensing fee on each device operating in the city or using city right of way.

In response to a question from Phillips, Scott said that based on his understanding, the dollars associated with the fees would be available in the coming days -- in particular, the $10,000 franchise fee.

"We should see those dollars as quickly as possible," Scott said.

City Director Kathy Webb of Ward 3 said she could not vote yes on the ordinance without a helmet requirement.

Webb said she generally considers herself to be a progressive person, "But without a helmet requirement I cannot vote yes on this ordinance," she added.

A requirement for scooter companies to provide or otherwise approve helmets for riders younger than 18, which was proposed by Kumpuris for the previous version of the ordinance, was part of Scott's rationale for vetoing the measure last year.

"Requiring companies to provide helmets to riders is unduly burdensome and beyond the scope of appropriate city policy," Scott told city directors at the time.

On Tuesday, Scott emphasized that the Lime scooters are already in Little Rock and have been since 2018.

With regard to helmets, Scott said Lime has signaled the company's interest in hosting a helmet giveaway after the coronavirus pandemic. And under the ordinance, city staff members can work with operators to limit or ban scooters from a particular area if scooter use becomes a problem there, the mayor said.

"Scooters are a quality-of-life amenity and it's imperative that we set reasonable policy to attract more amenities to our city," Scott said. "We must think bigger to make Little Rock better."

Based on Lime's data, Scott said, the city has not experienced any injuries from scooters to date.

But Kumpuris, who is a gastroenterologist, described the situation as "unenforceable," and said scooter riders have zero protection if they are hit.

"I've seen, over my career, too many people on motorcycles or mopeds have problems when they get hit by a car, and I just can't in good conscience vote for this," Kumpuris said. "So you know, I'll forgo the revenue and I'm sorry that it's going to hurt your bottom line, but that's my feeling."

At first, Peck voted "present" before changing to yes after the completion of the roll-call vote.