Springdale developers ready to play with projects in ballpark district 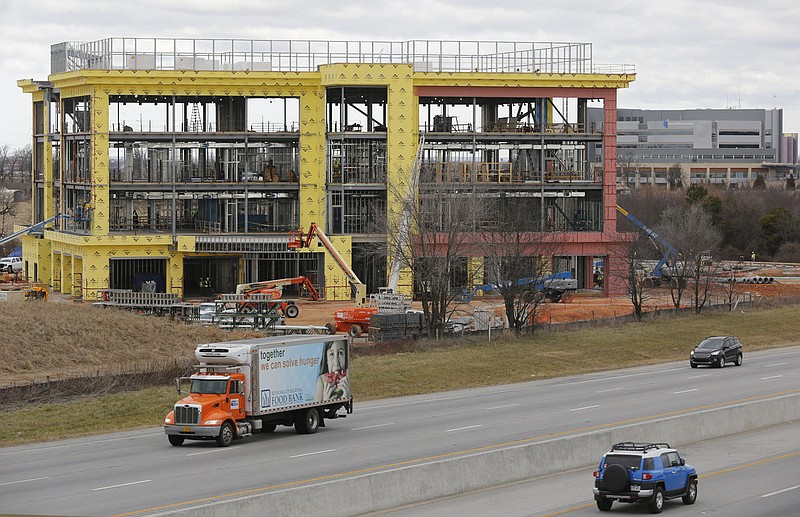 The construction of a new Arkansas Blue Cross and Blue Shield 81,000-square-foot building is visible Thursday, January 14, 2021, near the intersection of I-49 and Don Tyson Parkway in Springdale. Check out nwaonline.com/210117Daily/ and nwadg.com/photos for a photo gallery. (NWA Democrat-Gazette/David Gottschalk)

The city's Planning Commission on Jan. 5 approved plans for two multifamily housing projects, and two major medical facilities have opened in the district.

An office building supporting Arkansas Children's Northwest is under construction, an office park is planned to accompany the Highlands Oncology Group facility and Blue Cross Blue Shield is building a multistory office for its Northwest Arkansas team.

Perry Webb, recently retired president of the Springdale Chamber of Commerce, said Monday he knows more projects will likely pop up on the Planning Commission's agendas.

Arvest Ballpark opened in 2008 in pasture land west of Interstate 49 and south of West Sunset Avenue.

"Then, we sat on the sideline and watched and did nothing for four or five years," Webb said. "The economy opened up in what had been the worst recession since the Great Depression."

Springdale leaders used the economic downturn to build infrastructure to support development in the area.

Now is the time for the district to thrive, said Marshall Saviers. It's important to all of Northwest Arkansas, said Saviers, a member of the Northwest Arkansas Council helping guide development in the region. He also is president of Cushman & Wakefield | Sage Partners, working in commercial real estate development.

"This district has cemented itself as the medical hub of Northwest Arkansas," Saviers wrote in an email Wednesday.

"Medical care is such an important aspect to quality of life," Saviers continued. Residents across the four-state area increasingly are traveling here for treatment, he said.

Saviers noted multiple points of access from the interstate and the developing Interstate 612 bypass make the ballpark district easily accessible from all parts of Northwest Arkansas.

"Then you have other large quality employers planting a flag in the area, such as Blue Cross and BNSF Logistics," he said.

Philip Taldo, a local developer, plans a high-density, multifamily community for the district. Taldo sees the area developing fully to Tontitown, which meets Springdale at Arkansas 112. The Arkansas Department of Transportation is working on the design to widen and improve the highway, which will provide another important access point to the ballpark district.

He sees the district rounding out with retail, restaurant and entertainment venues as the threat of the covid-19 pandemic wanes and those sectors of the economy open.

Development -- especially commercial development -- can lead to increased revenue for the city in the form of sales taxes charged on purchases in the district, Webb said.

Children's Northwest opened in 2018 with clinics and labs, 24 inpatient beds, a helipad and several operating rooms.

Blue Cross Blue Shield, the state's largest provider of health insurance, has a new home for its Northwest Arkansas team under construction across Don Tyson Parkway from Highlands.

Highlands plans an expansion in the next few years. It also plans to add four surgeons, and the Breast Center of Northwest Arkansas last month opened an office in the Highlands building, Hunnicutt reported.

"We love the Don Tyson Parkway area next to the freeway," he continued. "It's probably the most visible location for patients to find."

Williams Tractor has started construction of its new home on the southeastern side of Interstate 49 at Don Tyson Parkway, said Patsy Christie, director of the city's Planning Department. A new housing development is planned for the northeastern side of the the interchange.

The City Council has approved a change in the development plan of Har-Ber Meadows subdivision to build town homes along Sunset Avenue.

Justin Cole, general manager of the Naturals, said he feels a vibrancy that wasn't there when the stadium sat alone. The Naturals are a AA minor league team for the Kansas City Royals.

The team and its fans won't fully appreciate the development until baseball returns, Cole said.

"But we're planning to play this year," he said.

The city declared the area around the ballpark an "overlay district," requiring higher standards for development, Christie said. Even the minimum standards for the district are over and above what the city requires in other areas, she said.

These standards ensure all development in the area offers the same high quality, protecting the landowners, developers and their investments, Christie said. The standards address signs, landscaping, building materials and more.

"It was obvious even going into the early 2000s that was going to be the next prime area for growth in Springdale, at the intersection of 412 and I-49," said Webb, who retired Dec. 31 from the chamber after 26 years.

A master plan for the 1,000 acres was developed by the city in 2004 with the area west of Interstate 49 to 64th Street and south of West Sunset Avenue to Don Tyson Parkway. City leaders since have expanded the district about 35 acres west to Arkansas 112 and south to Johnson Mill Road as interest in development grew, Christie said.

Voters passed a street bond issue in 2004 and another bond issue in 2006, explained Wyman Morgan, the city's director of administration and finance. Some of the money raised paid to build the ballpark, Don Tyson Parkway and the Don Tyson interchange on Interstate 49, he said.

Another bond issue in 2012 expanded 56th Street to become Gene George Boulevard, a widened thoroughfare with grassy center medians and roundabouts. The boulevard, the main road north and south through the district, ran south from West Sunset to Don Tyson Parkway. The most recent 2018 bond extended the boulevard north to Elm Springs Road.

"The city has probably spent $100 million on infrastructure in the district," Webb said. 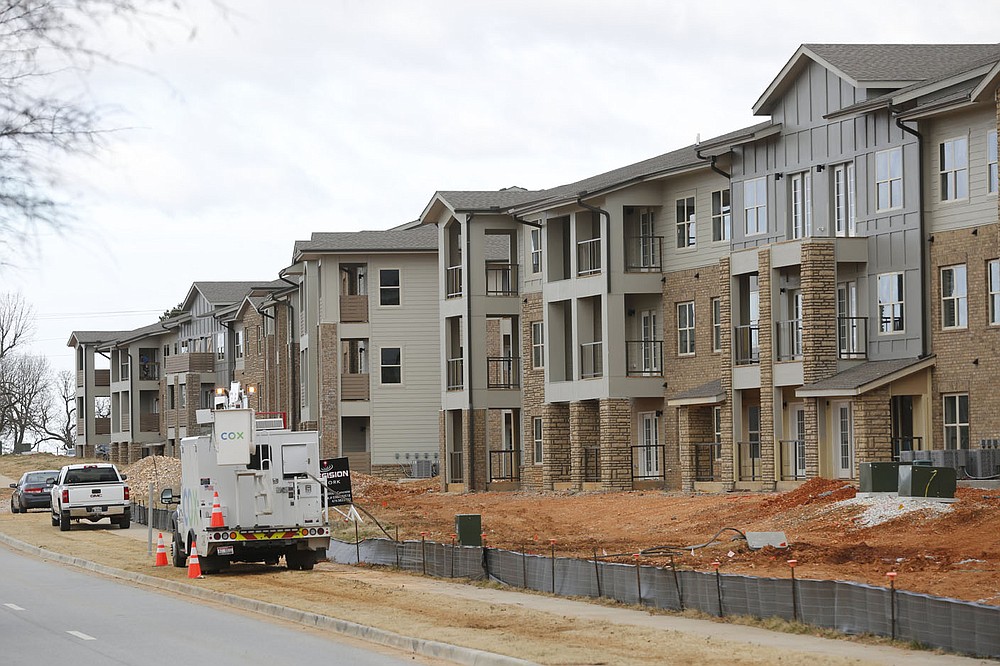 The construction of a 468-unit apartment community is visible Thursday, January 14, 2021, near Arvest Ballpark in Springdale. The apartments are called the Trails at the Crossings. Check out nwaonline.com/210117Daily/ and nwadg.com/photos for a photo gallery. (NWA Democrat-Gazette/David Gottschalk) 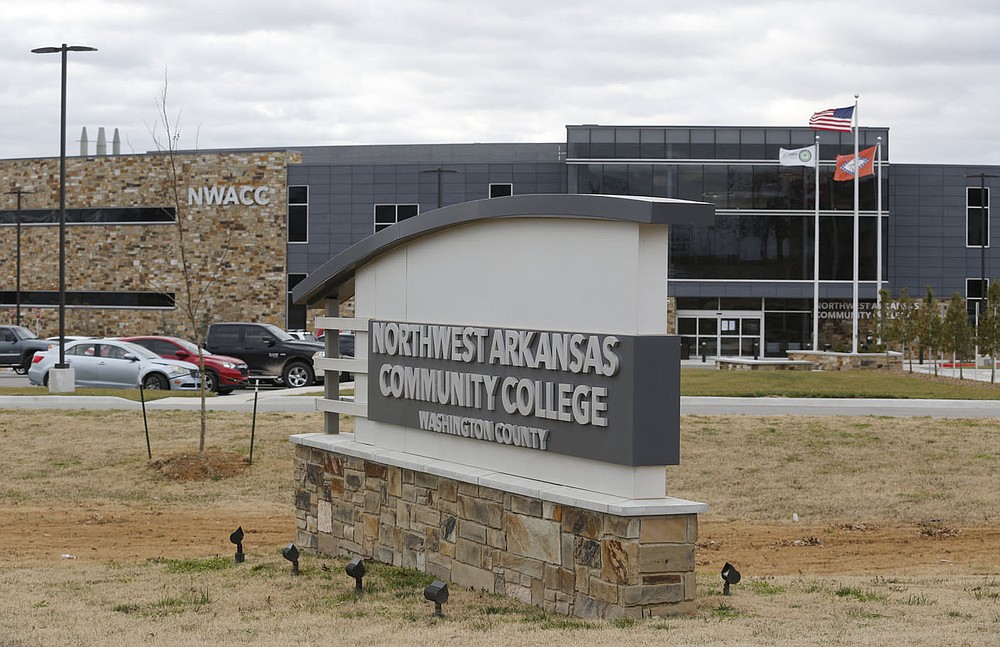