Law enforcers on high alert at federal sites in Arkansas 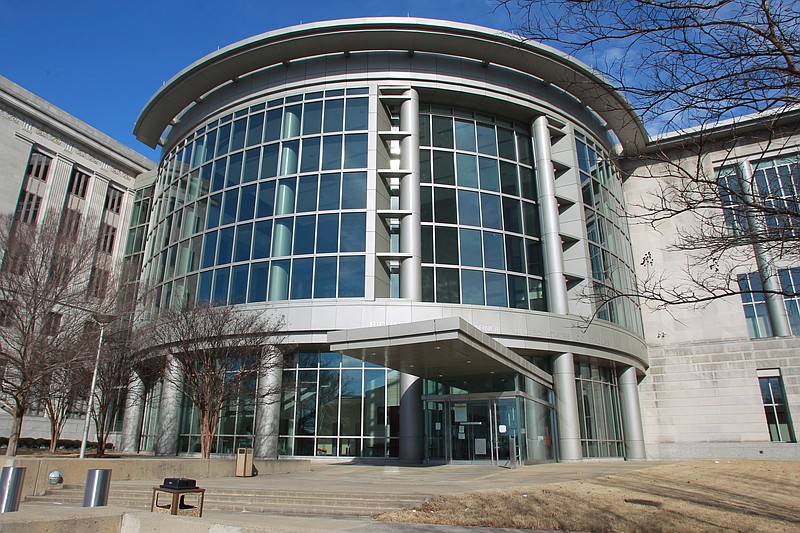 The Richard Sheppard Arnold Federal Courthouse in Little Rock is quiet Saturday morning. Security at the courthouse and the Federal Building next door has been stepped up as law enforcement officials across the nation prepare for possible unrest as the inauguration of President-elect Joe Biden and Vice President-elect Kamala Harris approaches. (Arkansas Democrat-Gazette/Dale Ellis)

Law enforcement agencies in Arkansas and throughout the nation are on high alert as preparations continue for this week's inauguration of President-elect Joe Biden. And while much of the focus locally is on the state Capitol building in Little Rock, authorities are also concerned about the potential for violence at the Richard Sheppard Arnold federal courthouse or the Federal Building next door.

The high alert comes amid fears that a violent incursion into the U.S. Capitol building by supporters of President Donald Trump on Jan. 6 -- which resulted in the deaths of five people, including U.S. Capitol Police officer Brian Sicknick -- could be a precursor to additional violence in Washington, D.C., and elsewhere around the country.

Although covid-19 restrictions have curtailed much of the daily activity in the Federal Building, many hearings in criminal and civil cases are still being held daily in the courthouse. Jury trials have been on hold for several months and will not continue until at least March 23 by order of Chief U.S. District Judge D. Price Marshall Jr.

Access to both the courthouse and Federal Building is restricted, with armed security personnel in place at public entry points and patrolling the areas around both buildings. Authorities said that security is being beefed up at both facilities through this week, but they did not provide details.

In the U.S. Marshals Service office for the Eastern District of Arkansas, which includes Pulaski County and Little Rock, Chief Deputy U.S. Marshal Jay L. Tuck said his office has been in frequent contact with authorities at all levels. And although he said he could not discuss specific security measures, he said security is tight.

"I'd say our protective posture right now is at the highest level it ever is," Tuck said in a phone interview Friday afternoon. "I just got out of a meeting with multiple state, federal and local partners, the U.S. attorney's office, state police, FBI, Homeland Security, just to discuss our response plan for the courthouse or how to assist each other here or as a force multiplier down at the Capitol."

The federal courthouse is located less than a half-mile from the state Capitol.

Tuck said multiple agencies have prepared to work in concert to keep a close eye on any demonstrations regardless of where they start or where they end up, and he said plans are in place to intervene quickly should any violence break out.

"You know, things seem like if they start down [at the Capitol building,] sometimes they march down Capitol [Avenue] and end up down here at Broadway," Tuck said. "We're prepared for that to help each other whichever way things go."

Tuck said he was not aware of any specific threats but added that the Jan. 6 storming of the U.S. Capitol has everyone on high alert.

"There's nothing right now, but we're going to be prepared just in case," he said. "Nobody expected that to happen [Jan. 6] and we don't expect anything to happen here, but we're prepared if it does."

Arkansas State Police spokesman Bill Sadler said a contingent of state troopers that is normally deployed during legislative sessions is being augmented by additional troopers for the next several days. Although the focus is the Capitol building, Sadler said the agency is ready to assist elsewhere if needed.

"As far as the federal properties are concerned," Sadler said, "certainly the Arkansas State Police would respond if U.S. marshals or the security detail at the federal courthouse made a request for help. Part of our operating protocol is that if any agency, federal or otherwise, were to call us ... we'll send the necessary resources and personnel there that they ask for."

Both the Pulaski County sheriff's office and Little Rock Police Department said they are prepared to assist state and federal authorities if needed. Sheriff's office spokesman Lt. Robert Garrett said that right now, the main focus is the state Capitol but that deputies will be available to assist anywhere they may be needed.

"We've already adjusted our manpower scheduling for the next week," Garrett said.

In a news release, the Little Rock Police Department said it has begun coordinating with other municipal, state and federal agencies after the FBI issued a warning on threats to state capitals. The release said that the city was not aware by Saturday of any credible threats or reports and that the city had not received any permit requests for protests or any other events coinciding with the inauguration.

Dewaine Allen, the chief deputy U.S. marshal with the Western District of Arkansas in Fort Smith, said his office has been in contact with other federal law enforcement agencies as well as state and local authorities and has been actively sharing intelligence with those jurisdictions.

"Failure to share intel will not be the downfall of our office," Allen said. "We're getting regular intelligence updates from the FBI and our Washington, D.C., headquarters, and we're making sure that our law enforcement partners here in Arkansas have the information they need to respond effectively. There is no lack of intelligence sharing."

Even though his office doesn't have the state Capitol building in its jurisdiction, Allen said all personnel under the command of the Western District U.S. Marshals Service office will be on alert to deal with any threats to federal buildings in the 24 counties that make up the district or to assist other agencies as needed.

"Our director has told us to be all hands on deck," he said. "We support First Amendment rights and have no issue with people peacefully protesting in public venues, but in no case will we tolerate violence, property damage, firearms possession, and certainly not penetration into our facilities."

Jessica Franklin, a spokeswoman for the FBI field office in Little Rock, said the FBI has been working closely with law enforcement authorities at all levels throughout the nation to share information and to investigate potential threats.

"Every FBI field office in the country has set up a command post that brings together personnel from several different agencies," she said. "We work together to gather intelligence, to assess potential threats, we surge resources where needed, and we're ready to help coordinate investigations and to do our part."

Franklin said that anyone with information regarding a potential threat is encouraged to contact the FBI by phone at 800-225-5324 (800-CALLFBI) or to submit tips online at www.fbi.gov/uscapitol.

"We're taking every tip and threat extremely seriously," she said. "It's so important for the public to remain vigilant and to report suspicious activity to us."

Franklin said the FBI is committed to investigating any reports of violence to ensure the safety of law enforcement authorities and citizens.

"We're charged with protecting the American people and upholding the Constitution," she said. "If you engage in violence or acts of domestic terrorism, then you can definitely expect a knock on the door from the FBI."

Assistant U.S. Attorney Allison Bragg said federal prosecutors throughout the country, including the Eastern District of Arkansas, are prepared to prosecute any violent acts that may occur.

"As always," Bragg said, "anyone who participates in violent acts on federal property will be prosecuted to the fullest extent of the law."