Impeachment proceedings, Biden Cabinet confirmations to vie for attention by Compiled by Democrat-Gazette Staff From Wire Reports | January 17, 2021 at 4:15 a.m. 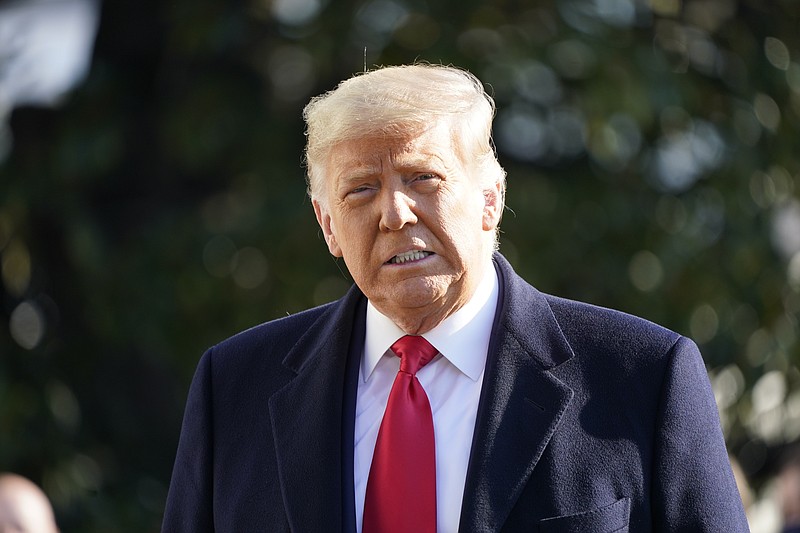 President Donald Trump speaks to the media before boarding Marine One on the South Lawn of the White House, Tuesday, Jan. 12, 2021 in Washington. (AP Photo/Gerald Herbert)

WASHINGTON -- Republican leader Mitch McConnell is telling senators that their decision on whether to convict outgoing President Donald Trump over the Capitol riot will be a "vote of conscience."

The timing for the trial, the first of a president no longer in office, has not yet been set. But House Speaker Nancy Pelosi made clear Friday that Democrats intend to move swiftly on President-elect Joe Biden's $1.9 trillion covid aid and economic recovery package to speed up covid-19 vaccinations and send Americans economic relief.

Biden is to take the oath of office Wednesday.

The House moved quickly to impeach Trump just a week after the Jan. 6 siege of the Capitol. The uncertainty of the impeachment trial scheduling reflects Democrats' desire that the Senate trial not dominate the opening days of the Biden administration.

With security forces on alert amid the threat of more violence heading into the inauguration, the Senate is moving to prepare for confirming Biden's nominee for national intelligence director, Avril Haines. A committee hearing is set for the day before the inauguration, signaling that a confirmation vote could come swiftly once the new president is in office.

Many Democrats have pushed for the impeachment trial to be held soon as a way to hold Trump accountable for his actions leading up to the Capitol violence and to prevent him from holding future office.

But others have urged a slower pace as the Senate considers Biden's Cabinet nominees and the newly Democratic-led Congress considers priorities like the coronavirus plan.

Biden's incoming White House press secretary, Jen Psaki, said Friday that the Senate can do both.

"The Senate can do its constitutional duty while continuing to conduct the business of the people," she said.

Psaki noted that during Trump's first impeachment trial last year, the Senate continued to hold hearings each day. "There is some precedent," she said.

Biden has asked the Senate to divide its time between the trial and regular business, but McConnell, R-Ky., hasn't publicly responded to that, and officials were still reviewing whether and how the chamber could do it.

Sen. Chris Murphy of Connecticut is among Democrats arguing to delay the trial or allow other business to be conducted. He said addressing the pandemic and confirming Biden's Cabinet nominees should be the Senate's priority.

"If there is a mechanism to either delay the trial or do it in parts, I would certainly support that," Murphy said Friday. He also said he's been "fairly impressed by Senator McConnell's performance," noting that the threat of conviction could influence Trump's actions in the final days of his presidency.

Former Sen. Tom Daschle, who was the Democratic leader in 2001, the last time the Senate was divided 50-50, said starting the trial sooner rather than later and having the Senate split its time "would be the most logical and pragmatic" approach.

Though delaying the trial a few months might seem like a way to speed action on pressing legislation, he said, it risks making it harder to forge agreements.

"The longer it hangs out there, the more political it becomes and the more divisive it could be," said Daschle, who was Senate Democratic leader during President Bill Clinton's 1999 impeachment trial.

Trump is the only president to be impeached twice, and the first to be prosecuted as he leaves the White House. He was first impeached by the House in 2019 over his dealings with Ukraine. The Senate voted in 2020 to acquit.

When Trump's second trial begins, House impeachment managers say they will be making the case that his incendiary rhetoric hours before the bloody attack on the Capitol was not isolated, but part of an escalating campaign to overturn the November election. It culminated, they will argue, in the Republican president's rally cry to "fight like hell" as Congress was tallying the Electoral College votes to confirm that he had lost to Biden.

For Republican senators, the trial will be perhaps a final test of their loyalty to the defeated president and his legions of supporters in their states back home. It will force a further reevaluation of their relationship with Trump, who not only lost the White House but saw his party lose majority control of the Senate, as they recall their own experiences sheltering at the Capitol as the pro-Trump mob ransacked the building.

"These men weren't drunks who got rowdy -- they were terrorists attacking this country's constitutionally-mandated transfer of power," Sen. Ben Sasse, R-Neb., said in a statement Friday.

"They failed, but they came dangerously close to starting a bloody constitutional crisis. They must be prosecuted to the fullest extent of the law."

McConnell, who has spent recent days talking to senators and donors, is telling senators the decision on whether to convict Trump is theirs alone.

Sen. Kevin Cramer, R-N.D., said McConnell told him that the verdict "would clearly be a vote of conscience" -- meaning the GOP leadership team will not work to hold senators in line.

That stands in contrast to Trump's first impeachment, when McConnell said he was "not an impartial juror" and that there was zero chance the president would be convicted.

Pelosi told reporters Friday that the nine House impeachment managers, who act as the prosecutors, are working on taking the case to trial.

Pelosi choked up as she described some rioters celebrating the Holocaust and white supremacy after they breached the "temple of Democracy."

The Jan. 6 attack angered lawmakers, stunned the nation and flashed unsettling imagery around the globe, and was the most serious breach of the Capitol since the War of 1812 and the worst by home-grown intruders.

"As we address the insurrection that was perpetrated against the Capitol complex ... right now our managers are solemnly and prayerfully preparing for the trial, which they will take to the Senate," Pelosi said.

"The only path to any reunification of this broken and divided country is by shining a light on the truth," said Rep. Madeleine Dean, D-Pa., who will serve as an impeachment manager.

Trump was impeached by the House on Wednesday on a single charge, incitement of insurrection, in lightning-quick proceedings. Ten Republicans joined all Democrats in the 232-197 vote, the most bipartisan modern presidential impeachment.

It's unclear who will make up the legal team representing Trump at trial. Democrats are tapping lawyer Barry Berke among others who worked on Trump's first impeachment.

McConnell is open to considering impeachment, having told associates that he is done with Trump, but he has not signaled how he will vote. McConnell continues to hold great sway in his party, even though Democrats will take control of the Senate with the seating of two new Democratic senators from Georgia.

Vice President-elect Kamala Harris will have the tie-breaking Senate vote. California Secretary of State Alex Padilla will take her Senate seat for the Democrats.

No president has ever been convicted in the Senate, which requires a two-thirds vote, a high hurdle. There's no indication yet that at least 17 Republicans will vote with Democrats to reach the necessary threshold, but it's clear that many in the GOP are angry.

Conviction is not considered out of the realm of possibility, especially as corporations and wealthy political donors distance themselves from the president's brand of politics and the Republicans who stood by his attempt to overturn the election.

Sen. Lisa Murkowski, R-Alaska, said Thursday, "Such unlawful actions cannot go without consequence." She said in a statement that the House responded "appropriately" with impeachment, and she will consider the trial arguments.

While some Republican senators have signaled their preference to move on, a handful have sharply criticized Trump's actions. Among them are Mitt Romney of Utah, Susan Collins of Maine and Pat Toomey of Pennsylvania, as well as Sasse and Murkowski. Still, Cramer said he doesn't think Trump will be convicted.

Sen. Tom Cotton, R-Ark., issued a statement saying he opposes impeachment against a president who has left office.

Trump ally Lindsey Graham, R-S.C., is building support for creating a commission to investigate the siege as an alternative to conviction.

Some Republicans contend that it is unconstitutional to hold an impeachment trial of a former president, but a number of legal scholars say the framers of the Constitution didn't intend to leave presidents free in the waning days of their terms to engage in egregious wrongdoing without consequence. 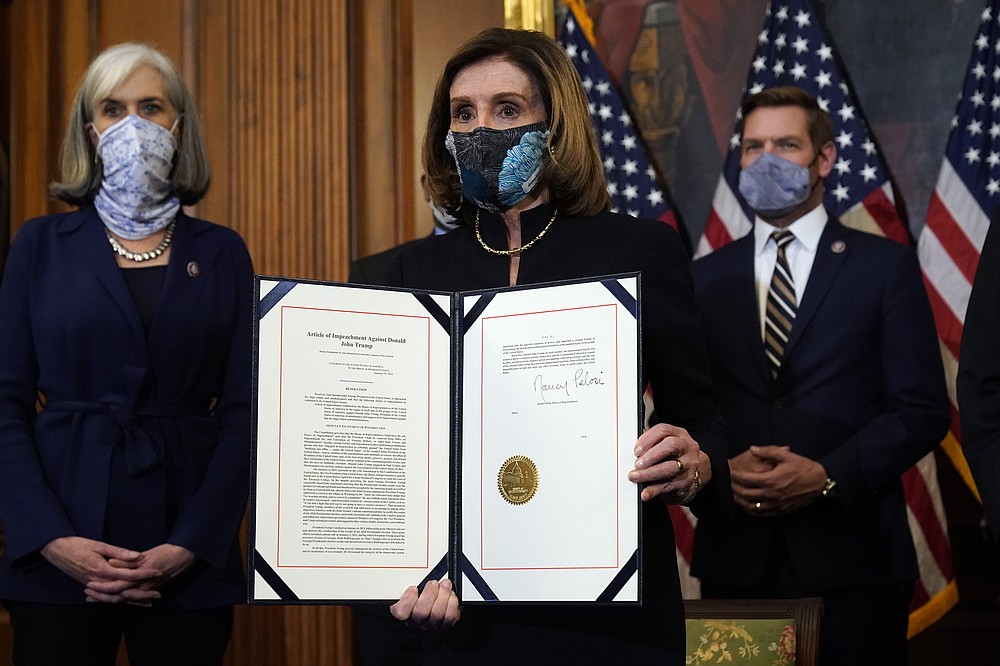 House Speaker Nancy Pelosi of Calif., displays the signed article of impeachment against President Donald Trump in an engrossment ceremony before transmission to the Senate for trial on Capitol Hill, in Washington, Wednesday, Jan. 13, 2021. (AP Photo/Alex Brandon) 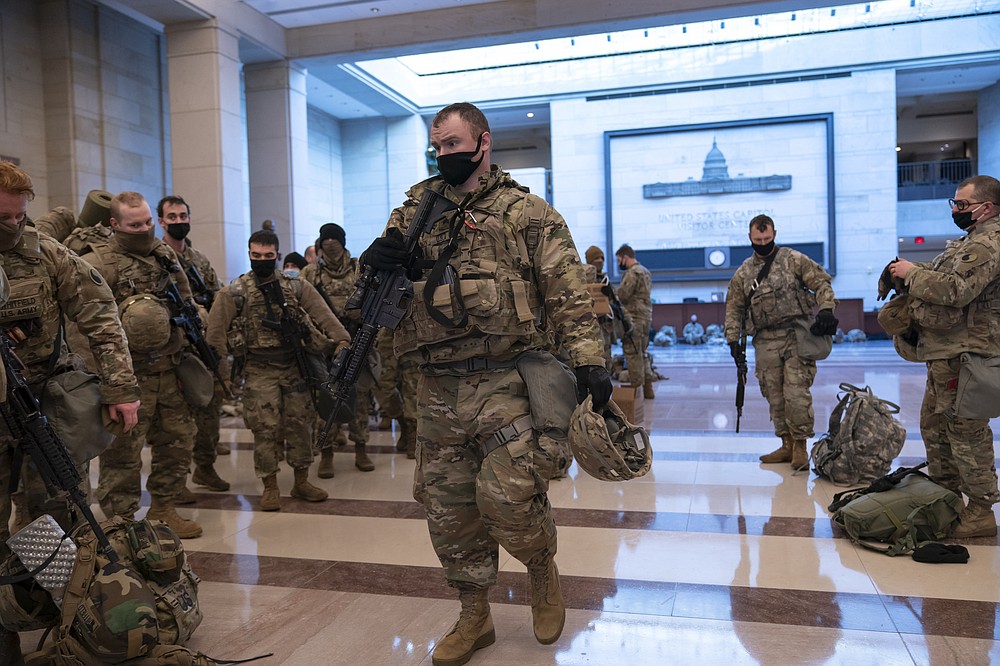 Hundreds of National Guard troops hold inside the Capitol Visitor's Center to reinforce security at the Capitol in Washington, Wednesday, Jan. 13, 2021. The House of Representatives is pursuing an article of impeachment against President Donald Trump for his role in inciting an angry mob to storm the Capitol last week. (AP Photo/J. Scott Applewhite) 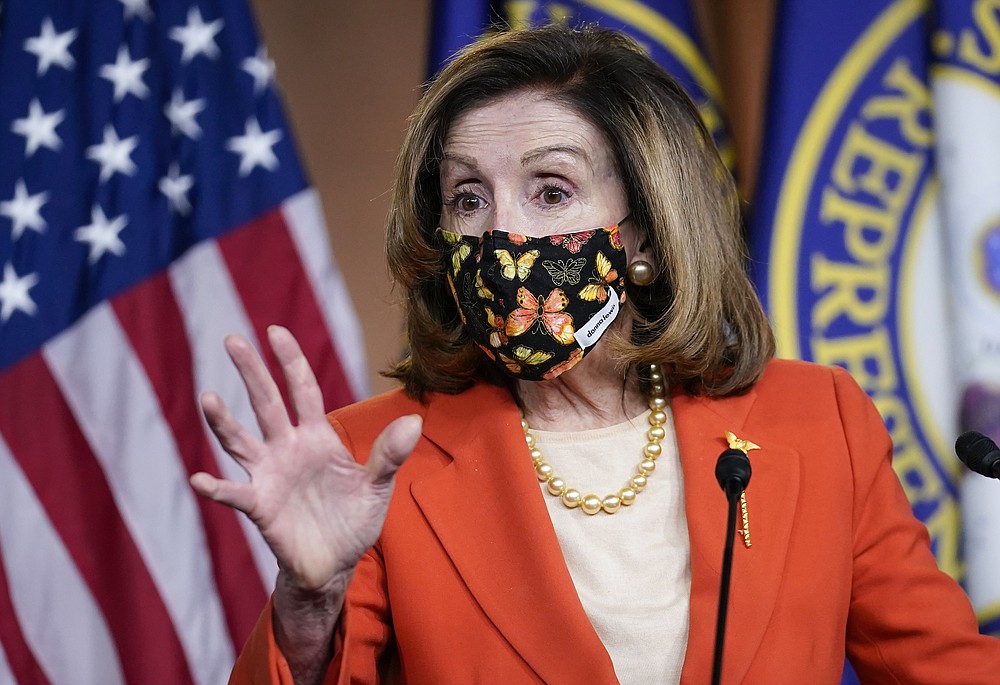 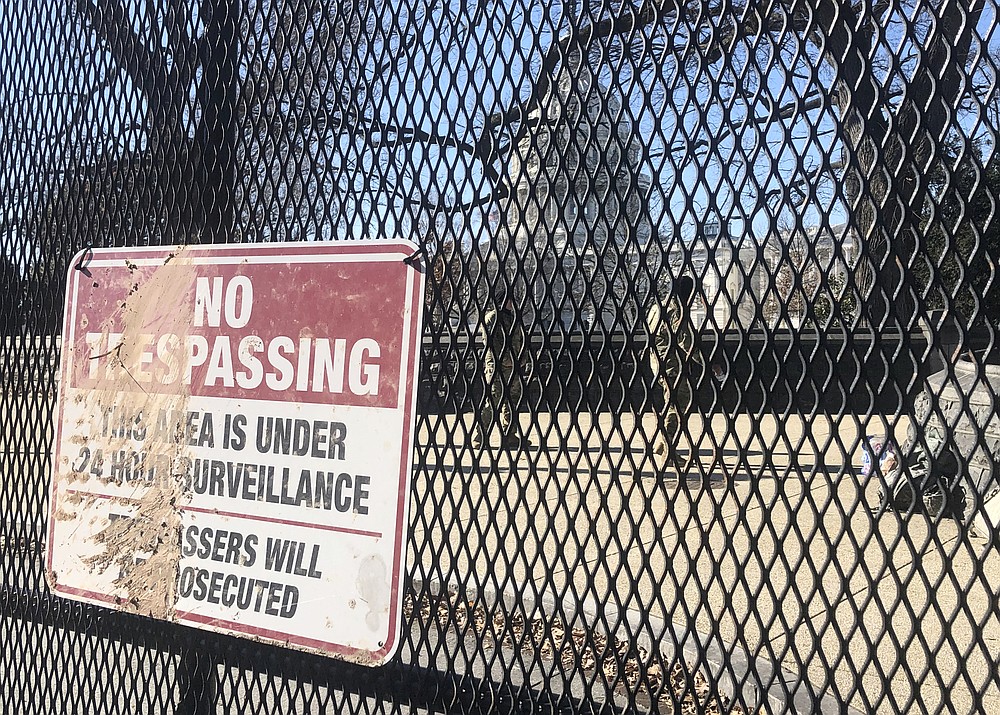 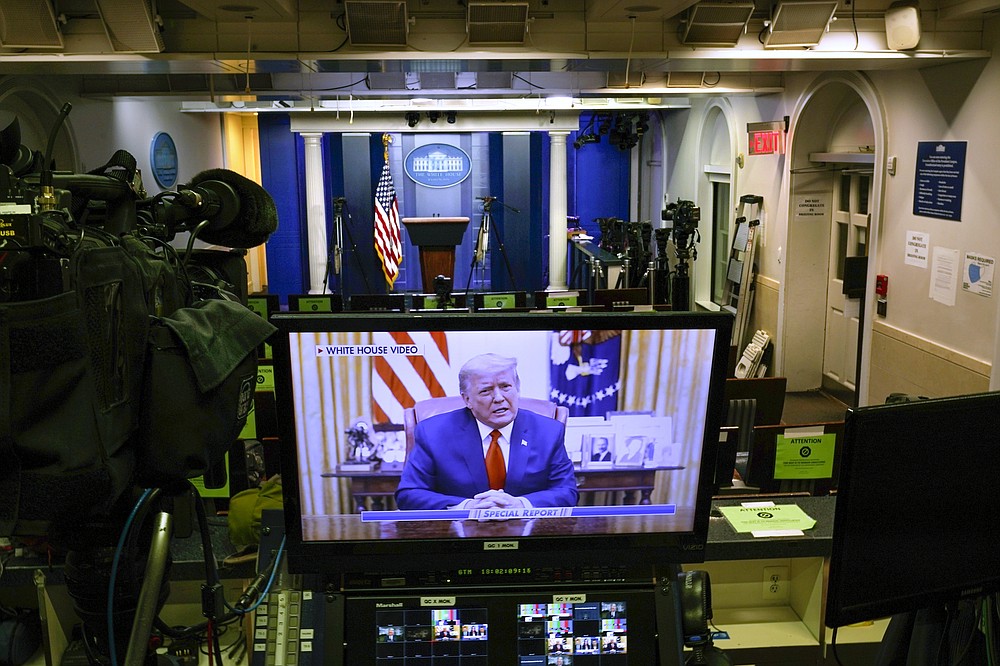 A video released by the White House, President Donald Trump shows a Twitter video on a television monitor in an empty press briefing room at the White House in Washington, after the U.S. House impeached him, Wednesday, Jan. 13, 2021. The pre-recorded video was being broadcast by Fox News. (AP Photo/Gerald Herbert ) 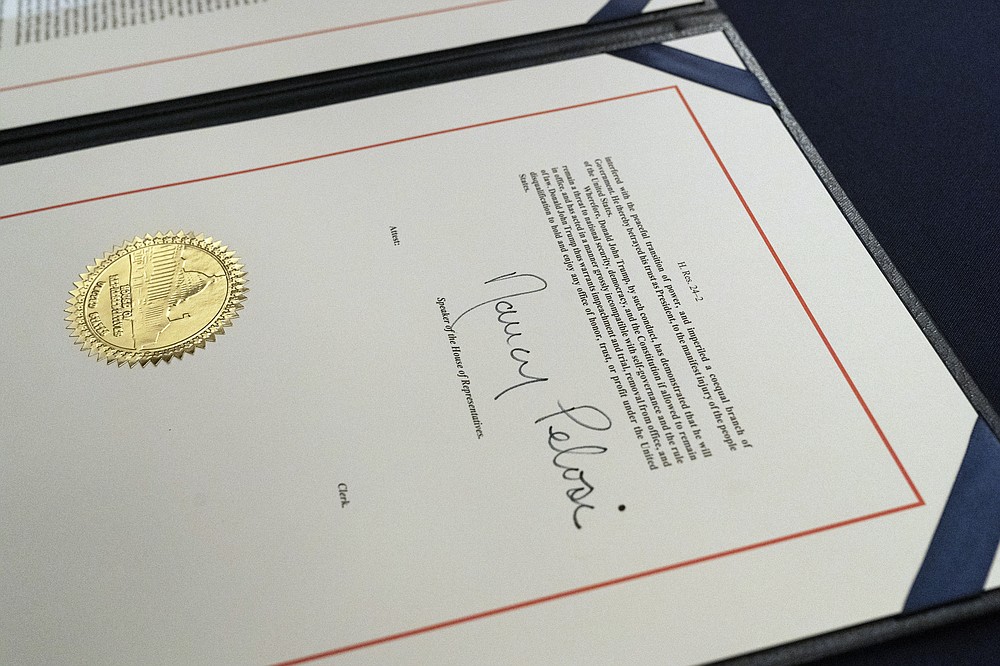 The signature of House Speaker Nancy Pelosi of Calif., is on the article of impeachment against President Donald Trump, after an engrossment ceremony before transmission to the Senate for trial on Capitol Hill, in Washington, Wednesday, Jan. 13, 2021. (AP Photo/Alex Brandon)
ADVERTISEMENT