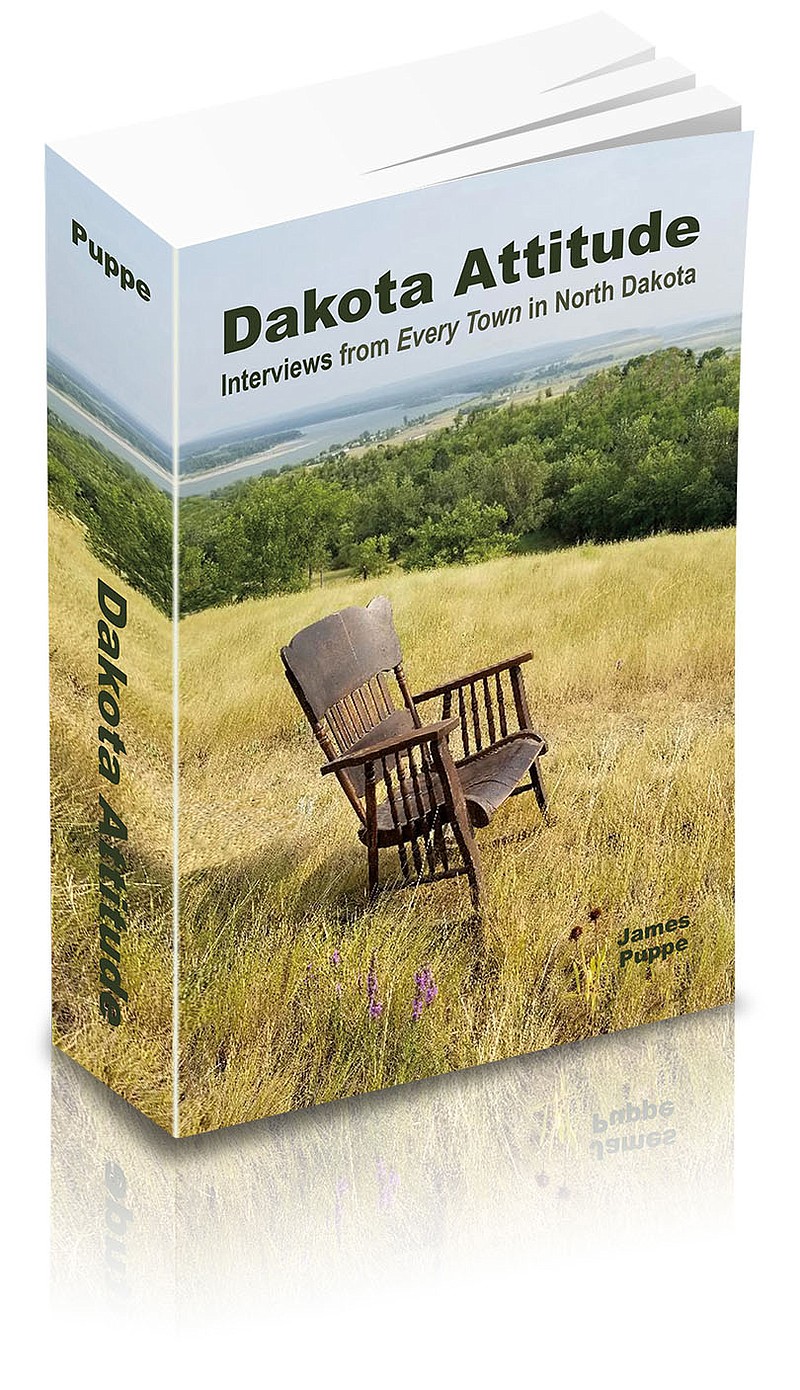 Read More “Dakota Attitude” is available at the North Dakota State University bookstore and can be ordered online at www.dakotaattitude.com.

Editor's note: With this story, we introduce a new Sunday feature about books, authors, what we're reading, what you're reading and anything else literary that might help get us through the winter. Next week, we'll feature Kat Robinson, a Little Rock foodie known for her Arkansas PBS programs and especially her books about pie. Send your ideas to Becca Martin-Brown, Features editor, at [email protected]

The stories are different, but the themes come through clearly -- deprivation, family, patriotism and faith.

Some 617 stories, many from the Great Depression and World War II, were gathered by one man who took 14 years to drive 113,000 miles over North Dakota's gravel roads and paved highways to every town in the state -- from Abercrombie to Zeeland, from the Red River Valley to the western Badlands.

"There was an untapped resource out there," said Jim Puppe, who grew up on a Pembina County farm. "I was able to capture remarkable stories, tons of wisdom, and appreciate the resilience. I could not stop."

While not a writer, he turned his labor of love into a book, "Dakota Attitude," self-published in December 2019 and in its fourth printing as of last month. Each story, with a photo taken by Puppe, fits on one page.

The germ for his audacious project came from his childhood.

"Living in North Dakota all my life, I heard of my parents' generation going through tough times," he said. "I wanted to hear how they survived the Dirty '30s, Depression, blizzards and other hardships. I wanted to hear not only from those in the larger cities, but from every community on the map. I was curious."

So, when he retired from the U.S. Department of Veterans Affairs in 2004, the Fargo resident started his journey in his 20-year-old van packed with a recorder, camera, sleeping bag, thermos of coffee, loaf of bread, a jar of peanut butter and homemade strawberry-rhubarb jam. His goal was to talk to someone from every town shown on the North Dakota road map.

His modus operandi: After arriving in a town, he approached anyone he thought might be local and introduced himself as a native North Dakotan. He asked that person to identify someone in town who portrayed "human spirit, optimism, good morals, values and integrity."

"It did not take long before I realized I was hearing great personal stories that were priceless," said Puppe.

In Loma, along the Canadian border, Mary Mann had stark Depression memories of her father going into town with his team of horses. "He'd buy sugar and coffee," she said in the book. "That's about all the money you had. My mother sewed most all our clothes 'cause there was nine of us kids."

Rueben Bjokne, who lived his entire life on the same Bottineau County farm where he was born in 1926, shared his Depression-era memories with Puppe. "Well, I can tell you this much, we had absolutely nothing. It was just grasshoppers as big as birds. I'd shoot grasshoppers with my BB gun. Oh, yeah, I was particular. I only shot the big ones. I couldn't waste my BBs."

And Jim Hanson, who was born in 1931 and grew up on a Cass County farm near Hickson in the Red River Valley, had one overriding heartbreak. "I can remember waking up on Christmas morning and my mother crying because she couldn't afford to buy us presents."

Puppe interviewed North Dakotans of Norwegian, Swedish, German and Irish heritage, among others, some of whom couldn't speak English when they went off to one-room schoolhouses. Carl Skarphol, who grew up a quarter-mile from Canada in Bottineau County on the farm his immigrant father homesteaded, was one. "When I started school, I talked Norwegian. I had to learn English. My mother never really spoke English."

Puppe talked to others who lost their language, like Eugene Hale, a Native American who was born in 1949 and grew up on the Spirit Lake Dakota Reservation in the northeastern part of the state. "When I was going to school at St. Michael's, if I spoke one single word of the Dakota language I would get punished for it. They would put us down. We couldn't speak our language. They took the language away."

Though Puppe gathered many heartbreaking stories, it only fed his desire to visit every town.

"Actually, the more I traveled and the more visits conducted, my passion to complete the interviews only intensified," Puppe said. "People were so friendly and willing to share. I was treated like a long-lost relative or as a neighbor. I felt like one of them."

The book's dedication reads: "To all North Dakota servicemen and women who died fighting for our freedom." That would include his father's first cousins, brothers Lester and Elmer Puppe, who died in combat just 69 days apart in Sicily and Italy.

While at the VA, Puppe developed a passion for working with former prisoners of war. On his trip, he interviewed five former POWs.

One was Maurice Bonemeyer, who was fighting in the Argonne Forest in 1944 when the Germans took him prisoner. "Guys were dying, some were losing their minds. I knew I couldn't survive." So Bonemeyer, who later became a dentist, faked an ear infection and ended up in the prison hospital. "That saved my life," he said. "I didn't get any more to eat, but at least I didn't have to go out in the cold and dig graves." And on the day he was freed, Bonemeyer said, "here comes this Sherman tank. That was the greatest sight I ever saw."

Over the years, many North Dakotans have pulled up stakes to relocate in neighboring Minnesota, including Paul Presthus.

Presthus was Rugby's star basketball player who led his team to the state title in 1962 and went on to become a captain of the Minnesota Gophers and raise a family in Edina.

Puppe said that when he visited Rugby -- which proudly calls itself the Geographical Center of North America -- there was no doubt among the locals that Presthus was the one to interview for his book.

The former player talked about his basketball memories and what his faith meant to his sport and to his life. Before each game, Presthus prayed and afterward, "I thanked the Lord."

In the book, he also had this advice: "Follow your dream; don't let anybody deter you from that. I've been fortunate. I've had great family, great friends, and great relationships through it all."

In an interview with the Star Tribune this month, Presthus took a moment to contrast his Edina life with small-town North Dakota.

"I loved growing up in North Dakota, and I love it just as much today. If I was a little younger, I would move back. I love the pace of life." 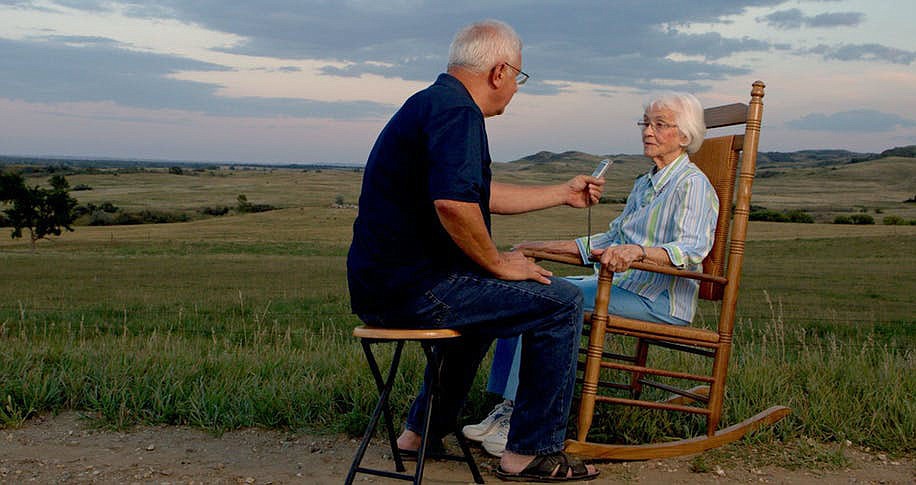 Over 14 years, Jim Puppe traveled across North Dakota, collecting tales from residents of every town, which led to his book “Dakota Attitude.” Above, he interviewed Pauline Koch Roll, from tiny Heil, who gave birth to 21 children in 21 years, the last in 1971. For Pauline, big families are a blessing. “Well, see, I come from a big family , so it really didn’t bother me that it’s too much work.” (Courtesy Photo/Jesse Knutson)
More News

“Dakota Attitude” is available at the North Dakota State University bookstore and can be ordered online at www.dakotaattitude.com.