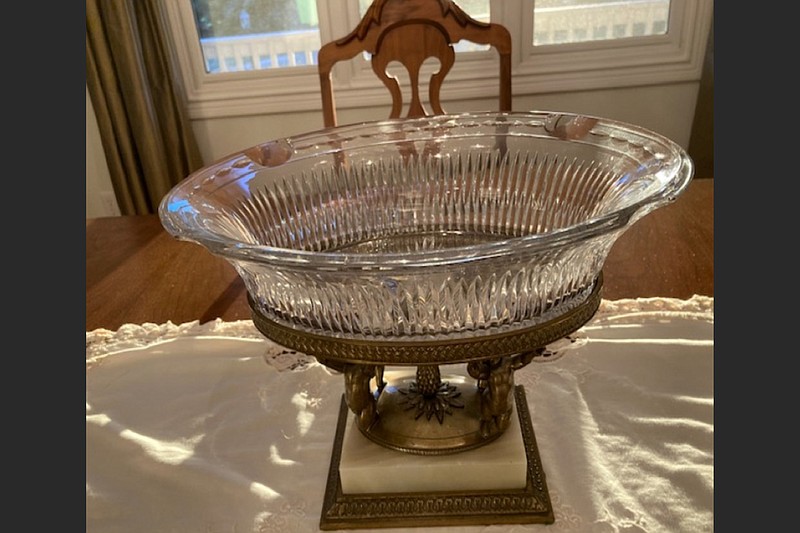 This elegant piece is made from bronze-plated and gilded base metal. (Handout/TNS)

DEAR HELAINE AND JOE: We believe we have a "bride's basket." It came to us from my grandmother, who was married in 1929. A corner of the bowl was broken, and my grandmother took it to a glass repairman who made the other corners match. The base is marked "Pairpoint C5560" plus a diamond shape with a "P" inside. Any information you may have would be greatly appreciated.

DEAR J.B.B.: Bride's baskets or bowls were popular starting about 1880. They generally had a glass insert nestled in a metal frame. They were most often used to serve cake, berries or other fruit. They were popular gifts to brides.

But there was another kind of bride's basket. These tended to be sterling silver. They were filled with flower petals or orange blossoms and carried down the aisle by little girls who scattered the petals as they walked. The bride's basket could also be placed on a table during the reception to display the bridal bouquet.

Unfortunately, J.B.B.'s bowl is not a bride's basket or bowl. Instead it is a centerpiece bowl made from bronze-plated and gilded base metal, white marble and fine cut crystal. We believe its longest diameter is 13 ½ inches and its height is approximately 8 ½ inches. There is no carrying handle. It is a tad too big and heavy to be used in the wedding ceremony or to serve cake and/or berries afterward.

Instead, the piece is most commonly used as either a mantel garniture (there were two matching pieces that often came with it, small compotes for the garniture) or as a table centerpiece (often with two diminutive candelabra). The centerpiece belonging to J.B.B. was made in a town that is better known for whaling and textile production.

The company's history begins in South Boston in 1837, when Deming Jarvis founded his glass works, which would later become the Mt. Washington Glass Co. In 1870, Jarvis moved his business to New Bedford, Mass. Ten years later, silver designer Thomas Pairpoint left his job at the Meriden Britannia Co. and established his silver plating operation in New Bedford, next door to the Mt. Washington Glass Co.

Among its array of products, Pairpoint made some metal mountings for the Mt. Washington Glass Co. (and others) and in 1894 the two companies merged. In 1900, the entire operation became known as the Pairpoint Corp., but between 1939 and 1970 they had several name changes and struggled to remain in business.

Providing a date for this bowl is difficult, but if J.B.B.'s grandmother actually remembers it being a wedding present in 1929, we can accept that. But we think it was made a tad bit earlier in the 20th century. We feel that circa 1910 is about right, but a date in the 1920s to the early 1930s is not out of the question.

Sadly, the damage to this elegant piece is a monetary value killer. In perfect condition, we feel it might retail in the $500 to $600 range, but the damage reduces the overall worth to between $50 and $100 at best.