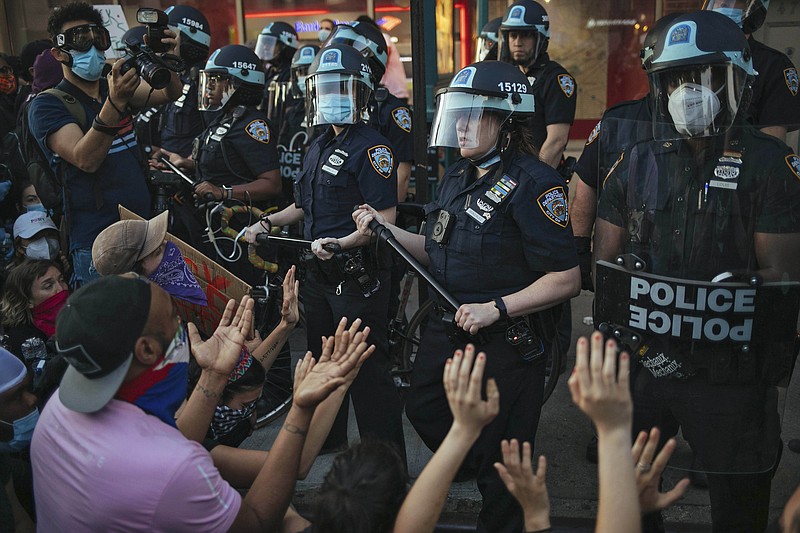 FILE - This May 31, 2020 file photo shows New York City Police facing off with activists during a protest march in the Bedford-Stuyvesant section of the Brooklyn borough of New York. New York’s attorney general sued the New York Police Department on Thursday, Jan. 14, 2021 alleging the rough treatment of protesters last spring in the wake of George Floyd’s killing was part of a longstanding pattern of abuse that stemmed from inadequate training, supervision and discipline. (AP Photo/Kevin Hagen, FIle)

Attorney General Letitia James' lawsuit includes dozens of examples of alleged misconduct during the spring demonstrations in the wake of George Floyd's police killing, including the use of pepper spray and batons on protesters, trapping demonstrators with a technique called kettling and arresting medics and legal observers.

"We found a pattern of deeply concerning and unlawful practices that the NYPD utilized in response to these largely peaceful protests," James said at a news conference announcing the lawsuit.

James, a Democrat, was asked by Gov. Andrew Cuomo to investigate whether New York City officers used excessive force to quell unrest and enforce Mayor Bill de Blasio's nightly curfew. She issued a preliminary report in July that cited a "clear breakdown of trust between police and the public."

James is seeking changes including the appointment of a federal monitor to oversee the department's policing tactics at future protests and a court order declaring that the policies and practices the department used during the protests were unlawful.

The lawsuit in federal court named the city, de Blasio, police Commissioner Dermot Shea and Department Chief Terence Monahan as defendants. James criticized de Blasio for saying the use of kettling was justified and Shea for saying that the department "had a plan which was executed nearly flawlessly" when officers cracked down on protesters June 4 in the Bronx.

In June, at the height of the protests, de Blasio was accused of misleading the city when he told reporters that he personally saw "no use of force around peaceful protests," even after officers had been caught on video moving on demonstrators without provocation and bashing them with batons.

De Blasio said he met with James on Wednesday and that they share the goal of pushing for major police changes, such as implementing recommendations in previous reports on the department's protest response. De Blasio, also a Democrat, said however that he did not agree a lawsuit was the solution.

"A court process and the added bureaucracy of a federal monitor will not speed up this work," de Blasio said. "There is no time to waste and we will continue to press forward."

John Miller, the department's deputy commissioner of intelligence and counterterrorism, said the department is committed to change but that James' lawsuit "doesn't seem to meet the standard for a federal monitor, and it doesn't seem to illustrate a pattern and practice" as required.

The head of the city's largest police union blamed a "failure of New York City's leadership" for sending officers "to police unprecedented protests and violent riots with no plan, no strategy and no support."

"They should be forced to answer for the resulting chaos, instead of pointing fingers at cops on the streets and ignoring the criminals who attacked us with bricks and firebombs," Police Benevolent Association President Pat Lynch said.

James' lawsuit is the second major legal action to stem from the Police Department's handling of the protests.

In October, the New York Civil Liberties Union and the Legal Aid Society sued the city on behalf of protesters who say they were assaulted and abused by police.

A civil-rights organization and a city watchdog agency also have criticized the department's actions. 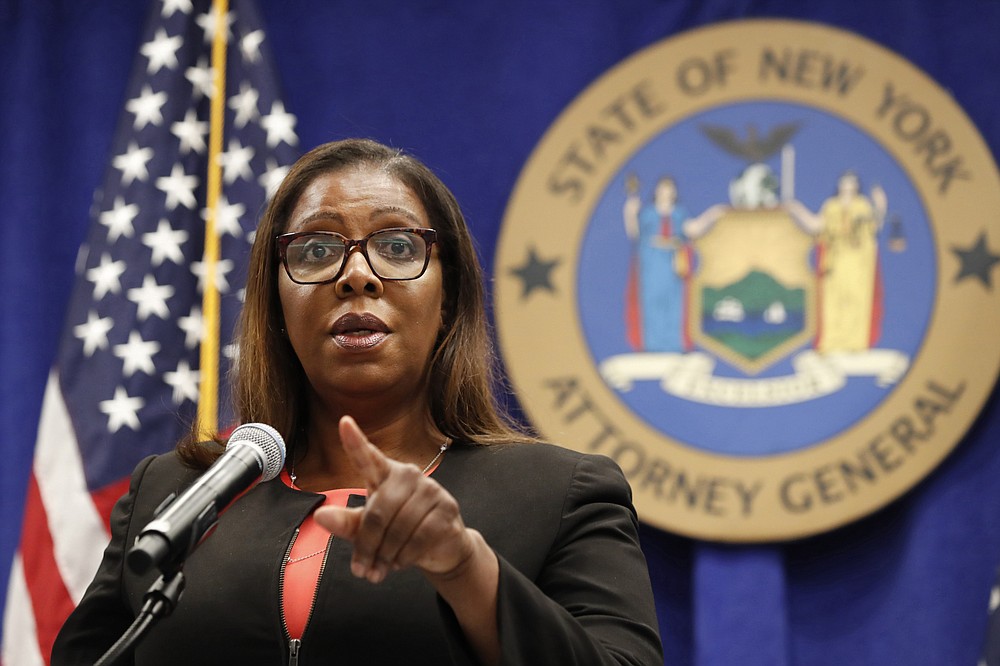 A route less uncomfortable
by Philip Martin
Legacy lost — Thousands of Rosenwald schools were built to improve education for Black students during Jim Crow era
by Helaine Williams
OPINION | CRITICAL MASS: Nostalgia is realization that we can never go back
by Philip Martin
OPINION | ON BOOKS: Rooting for the Other in 'Klara and the Sun'
by Philip Martin
State will offer single-shot covid vaccine Monday
by Tess Vrbin
ADVERTISEMENT