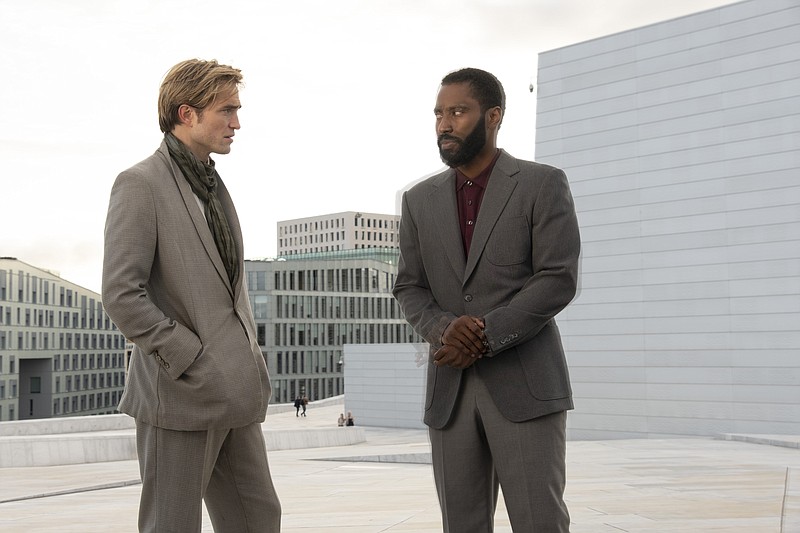 For the past decade or so, we've ushered in the new year with reflections on the just past year in movies by friends of the section -- critics, cinephiles and filmmakers with Arkansas connections. This past year was obviously a little different, and the Oscars and a lot of critics' groups, have pushed back their voting deadlines and are allowing films released in January and February of 2021 to be considered 2020 films for purposes of voting.

So we might be a little slower rolling out our lists this year; though we've already published those of our contributing critics Piers Marchant, Dan Lybarger and Courtney Lanning. (I did a big year-end review for the Sunday Style section and I'll probably also repurpose my Southeastern Film Critics Association ballot when I fill it out in February.) But some of our regulars have already submitted their 2o20 lists, and we'll kick them off this week with a Top 10 list from Fordyce's Keith Garlington, a fellow SEFCA member who regularly publishes at keithandthemovies.com.

[Video not showing up above? Click here to watch » https://www.youtube.com/watch?v=DBpige_NuVk]

10.) "I'm Thinking of Ending Things" -- I had no idea what to expect going into Charlie Kaufman's latest psychological horror/drama/dark comedy/thriller. Then again he is a filmmaker who works on his own unique plane of existence. That's what makes him interesting and often unpredictable. "Ending Things" is certainly all of that. Kaufman uses a slyly deceptive premise of a young woman contemplating breaking off a relationship with her eccentric boyfriend to explore familiar themes of identity, mortality, and the human condition. And yes, Jessie Buckley should be in Best Actress Oscar contention. It took a couple of viewings for me to really get in sync with the film. But once I did I was blown away.

9.) "A Call to Spy" -- I love true stories from World War II so naturally I love movies that bring those stories to life. "A Call to Spy" is a terrific example. This engrossing historical drama tells the inspirational and often harrowing story of the first women to serve as spies for Churchill in the early days of WWII. The film is anchored by a focused script from actress Sarah Megan Thomas that keeps the characters front and center, by nimble direction from Lydia Dean Pilcher, and by three standout performances from Thomas, Stana Katic and Radhika Apte. This is a smart, assured account of uncommon valor; a true story about strong women made by strong women. And it's as timely as it is compelling.

8.) "News of the World" -- Tom Hanks brought his "good guy" charms to the Western genre for the first time and the results were most memorable. Hanks and 12-year-old German actress Helena Zengel have a heart-piercing chemistry playing an unlikely duo crossing a lawless Reconstruction-era Texas. Both are lonely lost souls who are haunted by demons from their pasts. But over their perilous 400-mile journey a tender attachment begins to grow. Director Paul Greengrass delivers a timely film that plays like a classic Western but packs some modern day relevancy. And its soothing message of showing compassion and doing the right thing is just what we need right now.

7.) "Mank" -- Here is a film unashamedly aimed at ardent fans of Hollywood's Golden Age. Not just lovers of the movies themselves, but those fascinated by the behind-the-scenes culture of the big studio era. David Fincher's return to feature films sees him chronicling screenwriter Herman J. Mankiewicz and the events that inspired him to write the script for "Citizen Kane." The time-hopping structure was an adjustment, but once I got into Fincher's calculated rhythm, I was hooked. And it's also a visually lavish film, shot in rich black-and-white with scenes full of eye-popping period detail. I heartily admit that "Mank" isn't for everyone. But it certainly is for me.

6.) "Let Him Go" -- I have to admit I was onboard with "Let Him Go" just from hearing it would feature Kevin Costner as a retired sheriff, Diane Lane as his tough resolute wife, and Lesley Manville as a wicked backwoods matriarch. That's all I needed. Turns out there is a lot more to this character-driven, neo-Western drama than just a strong cast. The film has its genre flourishes, but it's really a heartfelt and earnest examination of family grief, regret and loss. Costner and Lane channel it all with a deep emotional precision. They have a terrific chemistry and writer-director Thomas Bezucha gives them some rich and meaty material to work with. I love this film.

5.) "The Truth" -- Tell me how this cast sounds to you -- Catherine Deneuve, Juliette Binoche, Ethan Hawke. This stellar trio lead the way in this captivating family drama written, directed and edited by acclaimed Japanese auteur Hirokazu Koreeda. From the very start it's clear Koreeda is aware of the incredible talent he is working with. His character-rich dialogue and patient, observational rhythms allow his performers to really dig into their roles. It's a treat for anyone who loves great acting. But Koreeda is a smart and savvy filmmaker who offers more than just an acting clinic. His film explores many of the themes that have long interested him and he shoots with the same deep intimate focus as in his past films.

4.) "Another Round" -- It's interesting that a film with a nuttier premise than anything else on my list is also one of the 2020 movies that moved me the most. On its surface "Another Round" sees a group of four middle-aged friends doing a cockeyed drinking experiment. But at its soul, the film is about so much more. Director Thomas Vinterberg reunites with actor Mads Mikkelsen to explore the depths of middle-aged disillusionment. Mikkelsen gives a subdued yet full-bodied performance that (just like the movie) can be darkly funny but that is undergirded with an unshakable sense of tragedy. It's easily some of the best acting of the year from what's easily one of my favorite films of 2020.

3.) "Nomadland"-- It's not really newsworthy when Frances McDormand gives a great performance. She's so good that we've come to expect it. But it is newsworthy when the two-time Oscar winner gives what may be the best performance of her already sensational career. She does that in Chloé Zhao's intimate, neo-realist drama "Nomadland." McDormand seamlessly blends into Zhao's intensely human canvas, not only inhabiting the world but deeply connecting with it and all its intricacies. And Zhao cements herself as one of our best filmmakers; a creator full of honest real-world perspective with a knack for telling moving and profoundly personal stories. "Nomadland" is all of that and more.

2.) "Minari" -- Without question one of the year's biggest and best surprises was Lee Isaac Chung's beautiful semi-autobiographical "Minari." This quiet and affecting drama is heartwarming and heartbreaking in its look at a Korean-American family who move from California to Arkansas in the early '80s to start a new life. Chung's film is a coming-of-age story, a tender comedy, and a poignant family drama all rolled into one. It also features one of the year's best ensembles led by a brilliant Steven Yeun (I hope Oscar is paying attention). I'm not sure any 2020 film has moved me quite like "Minari" and the mark it leaves stays with you.

1.) "Tenet" -- Christopher Nolan's 11th feature film was his biggest and most ambitious movie yet. It also may be his most divisive. But for many of us it was further proof why Nolan is often considered to be the industry's premier big budget filmmaker. "Tenet" is brilliant from both a narrative and technical standpoint. It's indelibly a Nolan film -- smart, cerebral, highly original, insanely well made, and full of big ideas. Driven by good performances and Nolan's boundless imagination, "Tenet" goes big and bold, challenging its audience to keep up and then delivering an immensely satisfying payoff once all his pieces are in place. It proved not to be for everyone, but I was blown away and for me it's an easy pick for the best film of 2020.