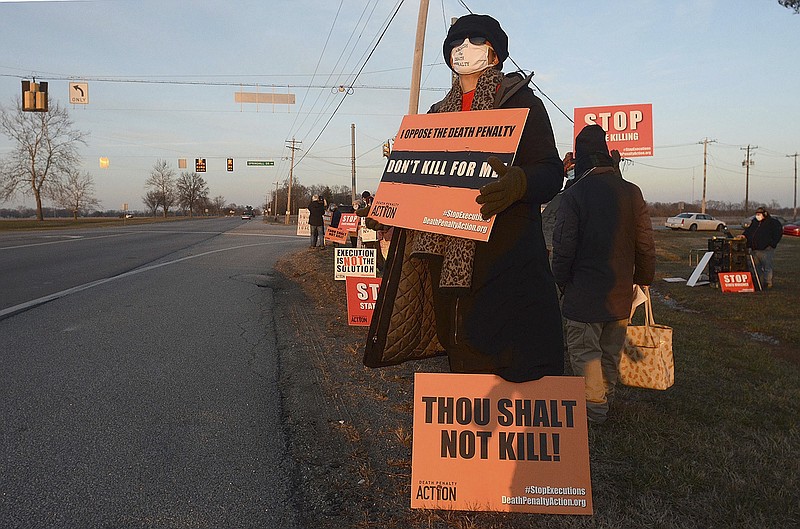 Karen Burkhart holds a sign across the road from the Federal Correctional Complex in Terre Haute, Ind., to protest the scheduled execution of Lisa Montgomery, Tuesday, Jan. 12, 2021. An appeals court granted a stay of execution Tuesday for Montgomery, convicted of killing a pregnant woman and cutting the baby from her womb in the northwest Missouri town of Skidmore in 2004. (Joseph C. Garza/The Tribune-Star via AP)

TERRE HAUTE, Ind. -- A Kansas woman was executed Wednesday for strangling an expectant mother in Missouri and cutting the baby from her womb, the first time in nearly seven decades that the U.S. government has put to death a female inmate.

Lisa Montgomery, 52, was pronounced dead at 1:31 a.m. after receiving a lethal injection at the federal prison complex in Terre Haute, Ind. She was the 11th prisoner executed at the facility since July when President Donald Trump resumed federal executions after 17 years without one.

As a curtain was raised in the execution chamber, Montgomery looked momentarily bewildered as she glanced at journalists peering at her from behind thick glass. A woman standing over her shoulder leaned over, gently removed Montgomery's mask and asked if she had any last words.

"No," Montgomery responded in a quiet, muffled voice. She said nothing else.

"I insisted that she did -- as I was present when [the spiritual adviser] discussed with her his plan to sing 'Jesus Loves You' to her while the chemicals flowed," Harwell said.

Asked about Harwell's account, a spokesman for the Federal Bureau of Prisons said the spiritual adviser was "afforded an opportunity" to be inside the chamber.

As the lethal injection began, Montgomery gasped briefly as pentobarbital, the lethal drug, entered her body through IVs on both arms. A few minutes later, her midsection throbbed for a moment, but quickly stopped.

At 1:30 a.m., an official in black gloves with a stethoscope walked into the room, listened to her heart and chest, then walked out. She was pronounced dead a minute later.

"The craven bloodlust of a failed administration was on full display tonight," another Montgomery lawyer, Kelley Henry, said. "Everyone who participated in the execution of Lisa Montgomery should feel shame."

The family of Bobbie Jo Stinnett, the 23-year-old Montgomery killed in the northwest Missouri town of Skidmore in 2004, declined to comment on the execution, prisons officials said.

Her execution came after hours of legal wrangling before the Supreme Court cleared the way for the execution to move forward. Montgomery was the first of the final three federal inmates scheduled to die before next week's inauguration of President-elect Joe Biden, who is expected to discontinue federal executions.

In a separate ruling Tuesday, which the government can still seek to overturn, another federal judge halted the scheduled executions later this week of Corey Johnson and Dustin Higgs after both tested positive for covid-19 last month.

The men's attorneys argued lung damage caused by the coronavirus made it more likely that the lethal injection would cause them severe pain. If they aren't executed before Biden becomes president, they may not be put to death.

Montgomery used a rope to strangle Stinnett, who was eight months pregnant, and then cut the baby girl from the womb with a kitchen knife. Montgomery took the child with her and attempted to pass the girl off as her own.

An appeals court granted Montgomery a stay Tuesday, shortly after another appeals court lifted an Indiana judge's ruling that found she was likely mentally ill and couldn't comprehend she would be put to death. But both appeals were lifted, allowing the execution to go forward.

As the only woman on federal death row, Montgomery had been held in a prison in Texas and was brought to Terre Haute on Monday night.

Montgomery's legal team says she suffered "sexual torture" for years, including gang rapes, as a child, permanently scarring her emotionally and exacerbating mental-health issues that ran in her family.

At trial, prosecutors accused Montgomery of faking mental illness, noting her killing of Stinnett was premeditated and included meticulous planning, including online research on how to perform a C-section.

Prosecutors told the jury Montgomery drove about 170 miles from her Melvern, Kan., farmhouse to the northwest Missouri town of Skidmore under the guise of adopting a rat terrier puppy from Stinnett. She strangled Stinnett, performed a crude cesarean and fled with the baby.

Montgomery was arrested the next day after showing off the premature infant, Victoria Jo, who is now 16 years old and hasn't spoken publicly about the tragedy.

The last woman executed by the federal government was Bonnie Brown Heady on Dec. 18, 1953, for the kidnapping and murder of a 6-year-old boy in Missouri. 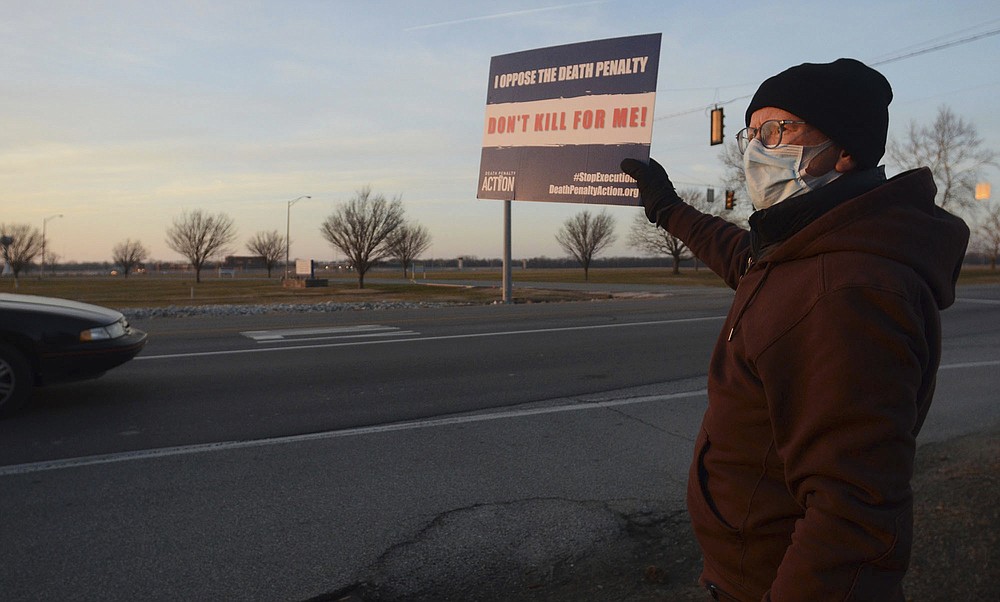 Death penalty opponent Wes Janz, of Indianapolis, holds up a sign for passing motorists to read as he and others protest the scheduled execution of Lisa Montgomery, Tuesday, Jan. 12, 2021, near the Federal Correctional Complex in Terre Haute, Ind. An appeals court granted a stay of execution Tuesday for Montgomery, convicted of killing a pregnant woman and cutting the baby from her womb in the northwest Missouri town of Skidmore in 2004. (Joseph C. Garza/The Tribune-Star via AP) 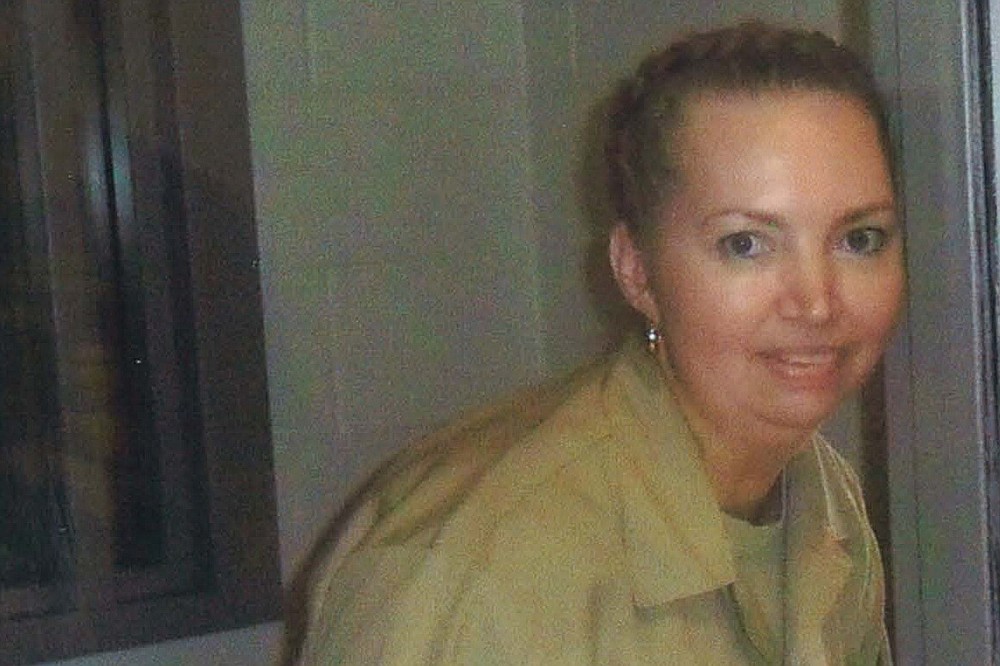