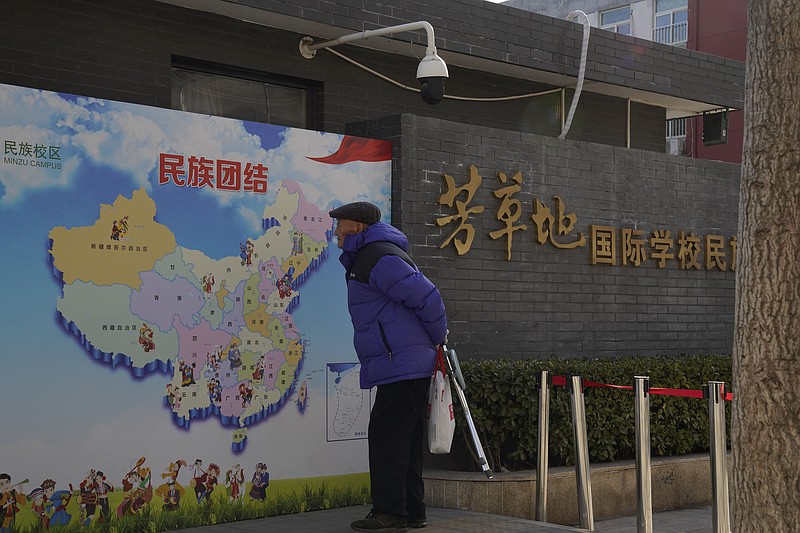 An elderly Chinese man looks at map of Chinese showing its different ethnic groups and the slogan "Ethnic Unity" in Beijing, China Monday, Jan. 11, 2021. A Chinese official on Monday denied Beijing has imposed coercive birth control measures among Muslim minority women, following an outcry over a tweet by the Chinese Embassy in Washington claiming that government polices had freed women of the Uighur ethnic group from being "baby-making machines." (AP Photo/Ng Han Guan)

WASHINGTON -- The U.S. government announced Wednesday that it will halt imports of cotton and tomatoes from the Uighur region of China in its most sweeping action yet to pressure the Communist Party over its campaign against ethnic minorities.

Officials said Customs and Border Protection will use its authority to block products suspected of being produced with forced labor to keep out cotton, tomatoes and related products from the Xinjiang region of northwest China.

Xinjiang is a major global supplier of cotton, so the order could have significant effects on international commerce. The Trump administration has already blocked imports from individual companies linked to forced labor in the region, and the U.S. has imposed sanctions on Communist Party officials with prominent roles in the campaign.

The order will put economic pressure not just on China but global retailers who unwittingly or otherwise import goods produced by people under conditions that are akin to modern-day slavery.

"Any global apparel brand that is not either out of Xinjiang already, or plotting a very swift exit, is courting legal and reputational disaster," said Scott Nova, executive director of the Worker Rights Consortium, a labor-rights monitoring organization. "The days when any major apparel brand can safely profit from Xinjiang cotton are over."

The consortium estimates the U.S. ban affects about 20% of the global cotton supply.

Some in the private sector have argued against a region-wide order, saying it can penalize legitimate producers and because it can be hard to ensure tainted raw materials do not enter the supply chain. That is especially true with Chinese cotton that is used to make clothing for export in other countries such as Bangladesh and Vietnam.

The U.S. imported about $9 billion worth of cotton goods from China overall last year, according to Brenda Smith, the executive assistant commissioner at Customs and Border Protection's Office of Trade. That does not include products from third countries.

Only about $10 million in tomato products entered the U.S. from China last year, Smith said.

In November, the U.S. blocked goods from a company that controls about a third of cotton production in the Uighur region and about 6% of all cotton globally. Under that order, U.S. Customs and Border Protection has stopped 43 shipments from entering the U.S., worth more than $2 million in all, Smith said.

"The ultimate goal is that China abandons these horrific practices," Ken Cuccinelli, the acting deputy secretary of the Department of Homeland Security, said in a conference call with reporters to announce the latest measure.

China has imprisoned more than 1 million people, including Uighurs and other mostly Muslim ethnic groups, in a vast network of concentration camps. People have been subjected to torture, sterilization and political indoctrination in addition to forced labor as part of an assimilation campaign in a region whose inhabitants are ethnically and culturally distinct from the Han Chinese majority.

Uighur forced labor has been linked by reporting from The Associated Press to various products imported to the U.S., including clothing and electronic goods such as cameras and computer monitors. Smith and Mark Morgan, the acting U.S. customs commissioner, credited the media and nongovernmental organizations with supplying information that resulted in efforts to block the imports.

China denies allegations of rights abuses and forced labor, saying it aims only to promote economic and social development in the region and stamp out radicalism. It also rejects criticism of what it considers its internal affairs.

Foreign Ministry spokesperson Zhao Lijian, asked about the issue at a news conference Wednesday, said people in Xinjiang voluntarily sign contracts and are paid. "The so-called forced labor is nothing but a lie fabricated by certain institutions and individuals in Western countries," he said.

The U.S. action is the latest, and most sweeping, attempt to pressure China to end the campaign. Canada and the British government both recently said they too would take steps to stop goods tainted by forced labor from entering their countries.

Customs and Border Protection has in the past targeted entire product lines and regions with import bans, including issuing an order against cotton from Turkmenistan in 2018 and gold from artisanal mines in eastern Democratic Republic of the Congo in 2019. 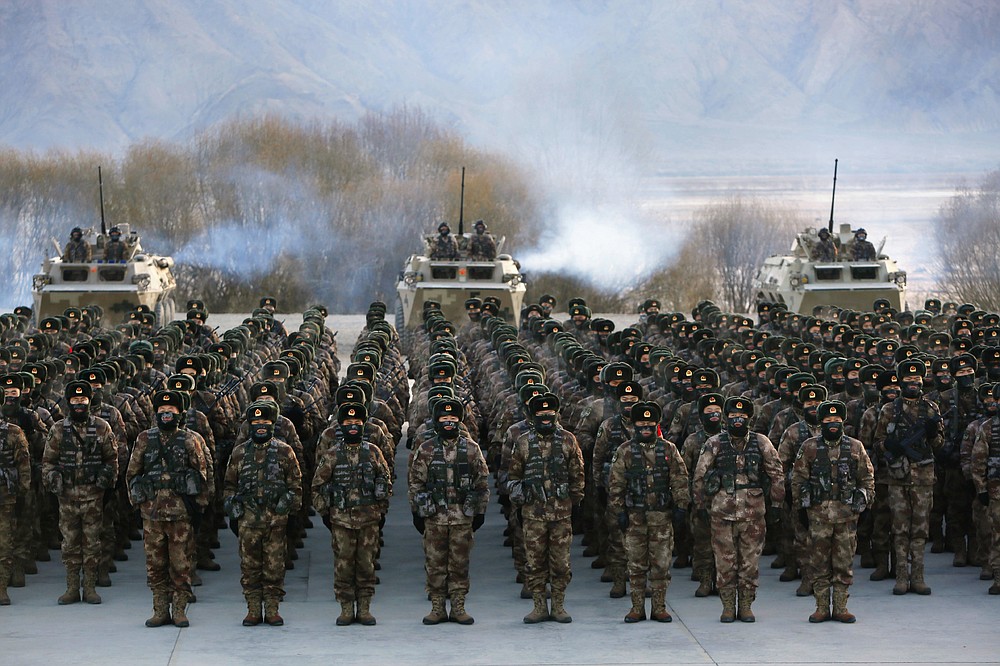 Chinese soldiers rally while training in -20 degrees Celsius (-4 Fahrenheit) conditions in Kashgar in northwestern China's Xinjiang Uighur Autonomous Region on Monday, Jan. 4, 2021. An official from China's Communist Party signaled last December that there would likely be no letup in its crackdown in the remote Xinjiang region, but said the government's focus is shifting more to addressing the roots of extremism. (Chinatopix Via AP)