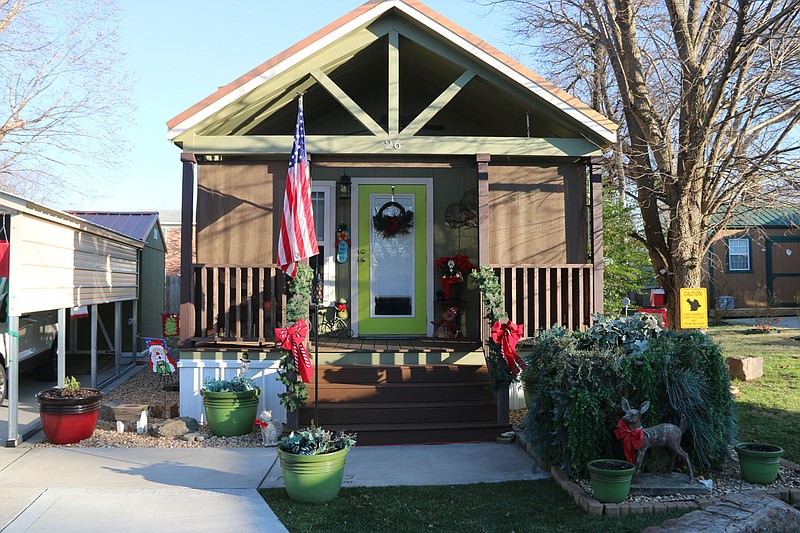 Moné Arnold’s tiny home was built next to a tree and is surrounded by greenery in various pots. Arnold purposely chose to place her house next to the only tree in the neighborhood. (Courtesy Photo/Abby Zimmardi)

Editor’s note: This is another in a series of stories written by journalism students in Bret Schulte’s classes at the University of Arkansas.

Memories of all sizes are pinned to the beige walls, holiday decorations are proudly displayed on any available surface, a virtual fire is roaring on the large flat-screen TV, and three fuzzy pets and their owner, Moné Arnold, whose kind and happy personality shines throughout her house, occupy a tiny — yes, tiny — home.

Arnold, 63, lives in a cottage-style tiny home in Eagle Homes on Olive in Rogers, the first tiny home community for people 55 years or older in Northwest Arkansas. She lives with her dog, Sugah, and two cats, Newly and Honey.

“I just look at this, like this is mine, and I really, really like it,” Arnold says, cradling Sugah. “Life is good.”

The tiny homes can be purchased for $40,000 to $75,000 and are available as either a 15-foot-wide home, or a home that is 11-feet and 2 inches wide, explains Chris Gallo, part owner of Eagle Homes on Olive. When purchased, the homes include water, electricity and are in a quiet neighborhood with security cameras, a fence around the neighborhood and an on-site manager.

The size of the homes attracts people who are looking to downsize, leave a smaller environmental footprint, people who are divorced, widowed, retired, or simply want to do less cleaning, Gallo reveals.

“This type of living really is [attractive to] either young couples or elderly people who just don’t want to have a lot to clean, or maybe the professionals that just want a place to cook and to sleep, and then want to do their thing on the weekends and in the evenings,” Gallo says. “So it’s a footprint that a lot of people can relate to.”

Since its creation in 2016, interest in the Eagle Homes on Olive community has increased, and it will officially be at capacity this month when the 26th resident moves into the last available home, Gallo reports.

Because the community has seen an increase in interest from a wider audience than the 55-plus buyer, the property owners, Gallo and her husband Dave Gallo, are creating a new tiny home property.

The new community, also in Rogers, will be double the size of the current one, with no age restrictions, and is in the works to be completed sometime this spring.

Arnold is one of 26 homeowners in the Eagle Homes on Olive community and has lived in her home since 2016. As the second resident who moved in, Arnold has watched people come and go from the neighborhood.

Arnold has also seen the interest increase as the neighborhood filled to capacity, even with a few residents who are younger than 55.

The community has grown into a tight-knit group of homeowners who live in close proximity to each other. Because of the close proximity, it has made for more intimate, but still private, homes that have become valuable during the covid-19 pandemic.

Arnold and her neighbor, Carol Bellm, 62, have been able to continue to chat in person throughout the pandemic without leaving their homes. They are able to talk to one another from the comfort of their own porches.

Although their homes are similar in size, Arnold’s and Bellm’s houses do not share any other similarities in terms of appearance.

Arnold’s home is placed strategically next to the only tree on the lot and is a deep forest green color on the outside. Her home has a contrasting bright lime green front door that opens to a warm, welcoming and tiny interior to match the tiny exterior.

Steps lead up to a front porch with enough room for a porch swing, an extra chair and happy-looking yard statues of animals. Once through the lime green door, the kitchen can be found to the left and the inviting living room, to the right, is where Sugah likes to nap in her dog bed under the large window.

A few steps forward are stairs leading to the loft that Arnold uses for storage. Under the stairs lies the bathroom and bedroom where her two cats like to hide.

In her tiny home, many memories are on display, but she used to hold even more physical memories beyond those adorning the walls. Memories including her time attending Arkansas Tech and later singing in the military while serving as a paratrooper in Operation Desert Storm in the early 1990s.

Relics from her beloved adventures had to be thrown away to be able to fit everything into her tiny home, Arnold says.

“I threw away a lot of pictures and memories,” she says. “You can’t sell that, and I wouldn’t want to anyway, so I had to just throw it away. And it was just, oh, it was horrible.”

Arnold downsized to a home that is no larger than 15-feet wide, which is the widest home available for purchase.

She purchased her home outright for $62,000, which was part of the appeal of the community, she says. When looking for a new home, she considered living in downtown Rogers, but could not have been a homeowner because of the steep prices.

Before living in her tiny home, Arnold previously lived next to her mother, and even shared a yard with her, but after her mom died, she began looking for a new home.

“Seeing someone else living in her home, I don’t think I could handle it,” Arnold says.

About a month later, Arnold’s co-worker convinced her to look into buying a tiny home, and on Nov. 1, 2016, she officially moved in and had to downsize everything, including her memories.

In stark contrast to Arnold’s struggle to throw away memories is her neighbor, Bellm.

“I’ve always pretty much been a minimalist,” Bellm admits. “If you are attached to your things and heirlooms and stuff, this will never work for you.”

Bellm moved into her blue-gray colored tiny home in February 2019 and “has not looked back.” Bellm’s home is sleek and has few decorations, and her minimalist lifestyle is part of the reason she wanted to move into a tiny home.

“I have everything I need here,” Bellm assures. “I have a living room, and a dining room, and a kitchen, a laundry room and a bedroom, you know? They’re just little.”

After being a nurse for 40 years in Illinois, Bellm retired and found her niche within the different personalities on Eagle Homes on Olive.

“It’s funny, you’ll go into one of the other houses, and you can see their personality,” Arnold says.

Arnold displays her personality on the walls of her house just as Bellm does. Although the neighbors are different from one another in displayed memories and decorations, they are friendly with each other and consider their community a group of people that “would jump in to help anyone in this little neighborhood,” Bellm says.

To live in a tiny home, it takes a person who can let go of a lot of their possessions, and this is a similarity the homeowners in the Eagle Homes on Olive community share, Arnold says.

“We’re close knit because we’re a different kind of breed,” she muses.

Arnold, now retired, spends her days working part-time at the Samaritan Shop, chatting with her neighbors, catching up with her two sisters and cuddling with her pets in her tiny home.

Abby Zimmardi is a senior majoring in journalism at the University of Arkansas. She has worked for the Arkansas Traveler since 2019 and serves as the 2020-2021 multimedia editor. Zimmardi also contributes to ArkansasCovid. com and creates data visualizations and articles. After completing her undergraduate degree she plans on earning a master’s degree in journalism. This story was written as part of her studies at UA and is used in the NWADG with her permission. Email her at [email protected]