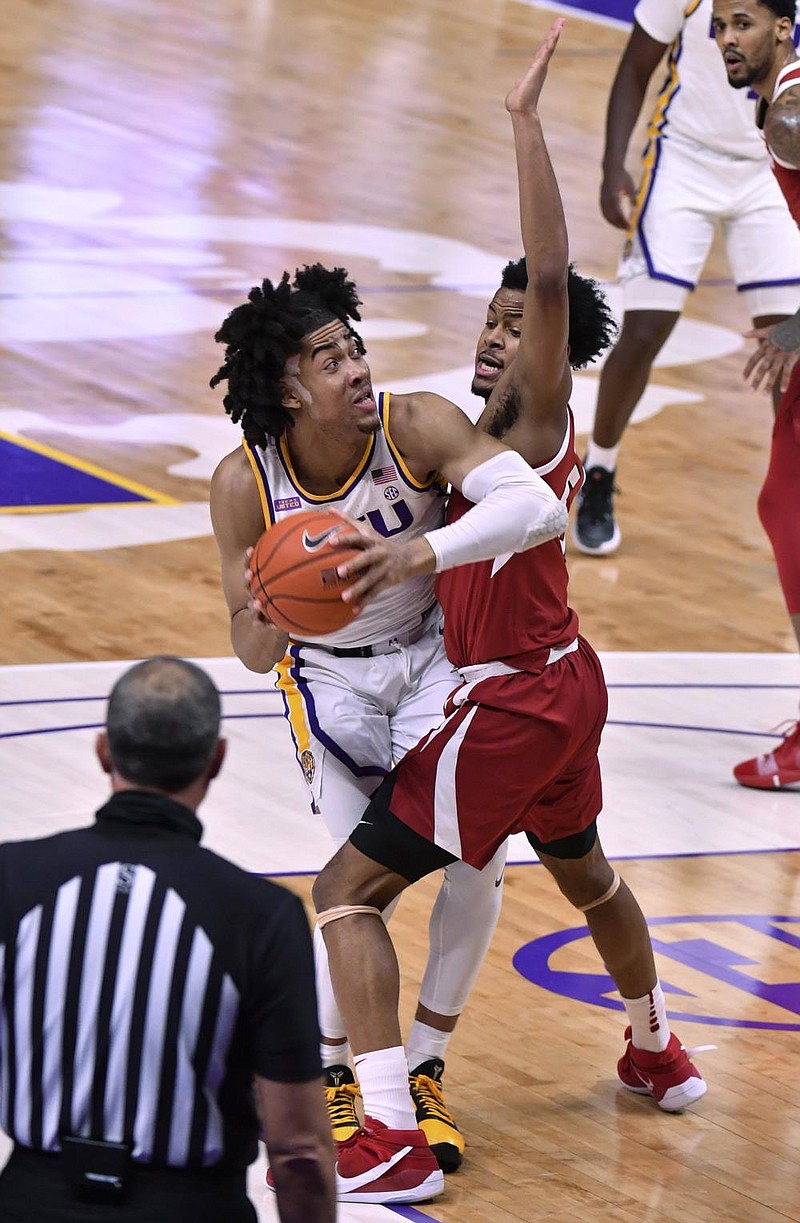 LSU forward Trendon Watford (left) tries to move past Arkansas guard Moses Moody during the Tigers’ victory over the Razorbacks on Wednesday in Baton Rouge. Watford had 23 points on 9-of-16 shooting with 10 rebounds. (AP/The Advocate/Hilary Scheinuk)

LSU's deep offseason study on the University of Arkansas paid dividends Wednesday as the Tigers got off to a roaring start and led by as many as 31 points before closing out a 92-76 win at the Maravich Assembly Center in Baton Rouge.

LSU Coach Will Wade said he and his staff spent a week to 10 days doing a thorough examination of Coach Eric Musselman, dating to his days as head coach at Nevada, because Wade said the Razorbacks got the better of LSU during a two-game split last season.

One of the tactics the Tigers employed was a three-quarter court trap that fell back into a 1-3-1 zone and gave Arkansas problems.

"I thought we had a lot of wide-open shots," Musselman said. "I thought we settled way too much early in the game. I didn't think we moved the ball enough."

LSU used two players to frequently trap point guard Jalen Tate and got plenty of mileage out of it. The move forced turnovers and kept the Razorbacks out of an offensive rhythm.

[Video not showing up above? Click here to watch » https://www.youtube.com/watch?v=jxQuLPZ-Rr4]

Wade said the intent was to burn time for Arkansas.

"We are starting to get good at the 2-2-1 and dropping back and matching up out of it and getting into what we are doing," he said.

On the times Tate beat the trap with the dribble or a pass, the Razorbacks did not take advantage of the numbers in their favor often.

"They played a 1-3-1, and we did not attack it as we were supposed to," Musselman said. "We didn't get the ball into the teeth of the defense at the nail and then make spray-out plays. We settled for three-point shots. That about sums it up."

"Our defense was tremendous and swarming," Wade said. "Exactly what we wanted."

Musselman was also critical of the point guard play of Tate, JD Notae and Davonte Davis.

" I thought our shot selection was not good, which was indicative of our [34.2%] shooting percentage," he said. "We had eight assists. We didn't have very good point guard play at all."

Arkansas guard JD Notae went out with a right shoulder injury at the 14:39 mark of the second half.

The guard swatted the ball away from Darius Days, who was driving the right block after catching an inbounds pass. After Notae dished the ball away, he got his arm tangled with the 245-pound Days, who turned and hammered the back of Notae's head with his left thigh while pursuing the ball.

Notae returned a few minutes later and finished off his team-high 22 points on 8-of-20 shooting.

"They're awesome players," Arkansas Coach Eric Musselman said. "We had zero answers for No. 2 Watford and Days. Zero."

The Razorbacks went a fourth consecutive game without having a dunk, while LSU threw it down three times.

Arkansas has only three dunks in five SEC games, all of them in the 97-85 road win at Auburn in the conference opener Dec. 30.

JD Notae dunked on a fast break at the final buzzer at Auburn after teammates Jaylin Williams and Connor Vanover dunked earlier in the second half. So the Hogs have gone 160 minutes without a stuff.

The Razorbacks missed 3 three-point shots in a 7-second segment of the second half.

Moses Moody missed the first from the right corner, and the ball caromed out on the left wing to JD Notae. The junior missed a three-point try, and Davonte Davis corralled the rebound and quickly pitched to Desi Sills near the left corner. Sills let fly another three-point shot and this one also went astray as part of Arkansas' 8-of-31 shooting from behind the arc.

LSU forward Darius Days stayed down on the court for a while after a loose-ball scramble didn't go his way with 4:25 left in the first half.

Jaylin Williams threw an Arkansas outlet pass too far in front of guard JD Notae and the ball trickled loose near midcourt. Days came from the Arkansas front court and made a dive for the ball. As Notae hustled past, his left foot connected with Days' face, leaving the sophomore in a daze.

The Razorbacks had made half their shots (3 of 6) before going through a horrendous dry stretch. Arkansas missed its next seven shots, five of them three-pointers, and fell behind 22-7 before Vance Jackson converted a layup.

LSU forward Mwani Wilkinson, left unguarded in the right corner, nailed his first three-pointer of the season to give the Tigers an 11-7 lead at the 15:59 mark. Wilkinson, a 6-5 freshman, had been 0 of 1 from three-point range, and UA Coach Eric Musselman said the Hogs would give Wilkinson the outside shot and adjust if needed.

• Arkansas guard Moses Moody played most of the second half with a rolled-up piece of gauze in his right nostril after apparently experiencing a bloody nose.

• Per HogStats.com, the Razorbacks fell to 0-25 in SEC games in which they trailed by 20-plus points at halftime, as LSU led 51-31 at intermission. 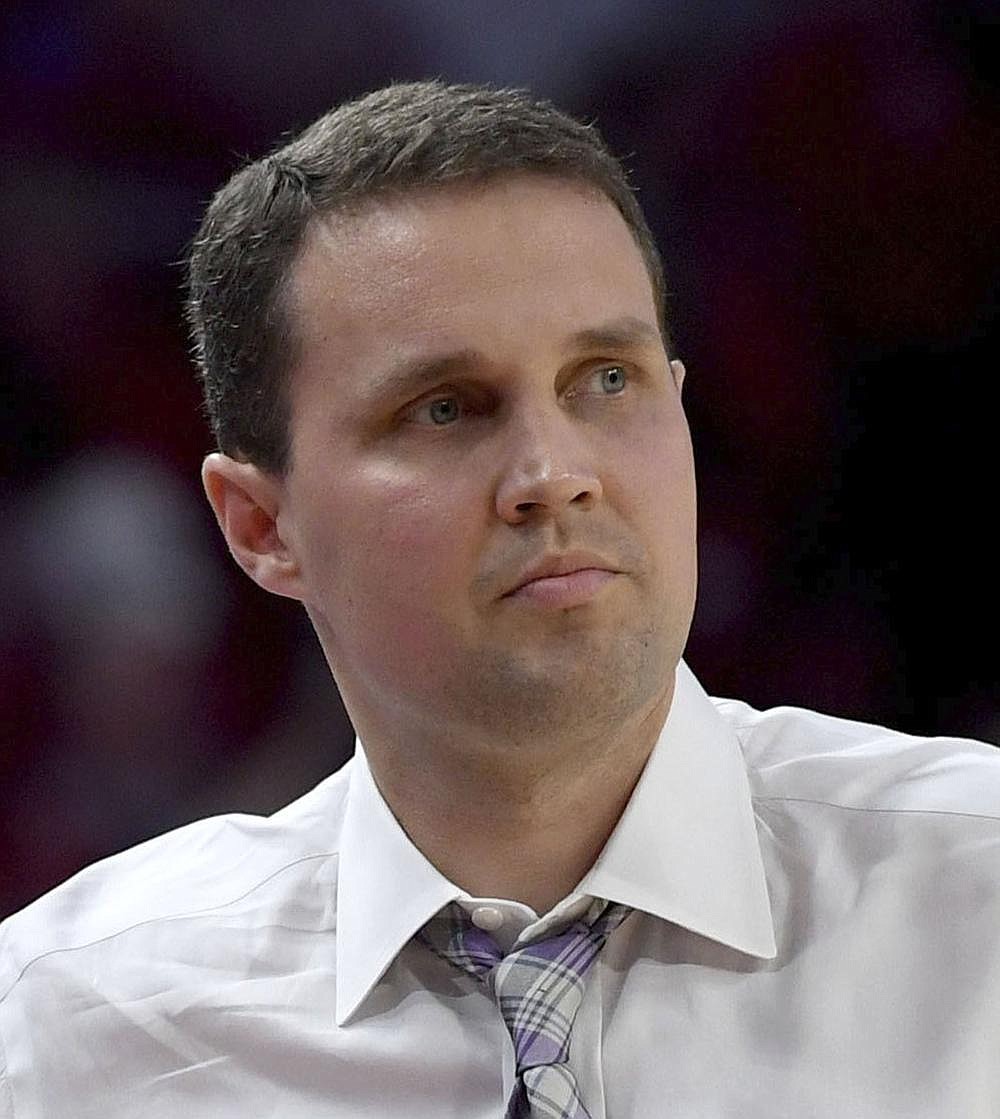