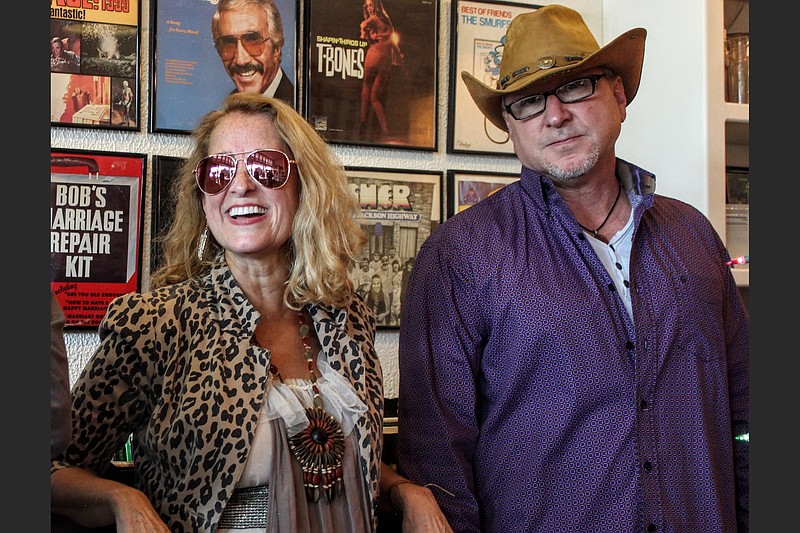 Ten Penny Gypsy, will perform from 3 to 5 p.m. Saturday at the River Bottom Winery, 13810 Combee Lane, Roland. Admission is free.

The duo — Justin Patterson and Laura Lynn Danley — got together in 2017 after years spent writing and performing solo. Ten Penny Gypsy quickly became an Arkansas favorite, with their self-titled album of 2018 nominated for album of the year at the Arkansas Country Music Awards.

Nominations for Americana artist of the year and vocal group of the year followed in 2018 and 2019. "Fugitive Heart," a collection of original songs produced by renowned multi-instrumentalist Anthony Crawford came out in 2020. The album prominently features the talents of 2020 Arkansas CMA nominee Buddy Case (guitarist of the year).

The album was recorded at Crawford's studio in Loxley, Ala., with themes influenced by the hardships of 2020.

On the band's website, tenpennygypsy.com, Patterson says: "I don't think it's coincidence that these songs came together at this time to form such a poignant collection. There's no doubt they belong in 2020, considering how far apart people currently feel from everything and everybody. The distances grew so fast, it was a difficult surprise for many to process."

◼️ Christine DeMeo will perform for a "ladies' night" show at 7 p.m. today at The Trough Bar and Grill, 833 Central Ave., Hot Springs.

The Reverend Blues Revival will perform from 7 to 9 p.m. Friday at The Beehive, 220 Minorca Road, Hot Springs Village. Admission is free.

Legendary New Orleans rock band The Radiators will perform three reunion shows live from Tipitina's in New Orleans at 8 p.m. Saturday, Sunday and Monday. Cost to access each night's show on nugs.net is $34.95; $89.99 for all three.

Fans can see which songs will be performed on which night, and choose to pay 99 cents per song if they so choose.

The band, which formed in 1978, was active until 2011, when it announced that after 33 years and more than 4,500 live shows and a dozen albums, the band was calling it quits, although there were still three-day runs at Tipitina's in January and occasional appearances at the New Orleans Jazz & Heritage Festival in April or May.

Members (and founders) of the band are Ed Volker on keyboards and vocals, Dave Malone on guitar and vocals, Camile Baudoin on guitar, Reggie Scanlan on bass and Frank Bua on drums and percussion.

Soo, who was raised outside Houston by first-generation Korean immigrant parents, "may well have the most gorgeous voice in Texas ... if not in all contemporary folk — its purity and strength can be downright devastating," says Acoustic Guitar Magazine.

◼️ Bonnie Whitmore will be featured on "Sundays With Mary" at 2 p.m. Sunday on Facebook or YouTube. Mary Gauthier hosts the show.

Down in El Dorado, plans have been announced for the second annual Mad Battle on Feb. 20, when seven bands will compete for a $2,500 grand prize. Bands include Crutchfield, deFrance, Fox Eating Foxes, Jasper Wilderness and Jimmy Lewis & 8 Second Ride. There will be two more "wild card" bands added, and here's the scoop on that: The two will be chosen by a fan-based vote via Facebook. Fans can begin voting for a favorite band's video beginning Monday on the Murphy Arts District's Facebook page.

Votes will be counted by the amount of "likes" or "loves" per video. The top two videos will be announced Monday and those two bands will join the announced five bands Feb. 20. For more information on "wild card" bands, visit the Mad Battle video album via Facebook.