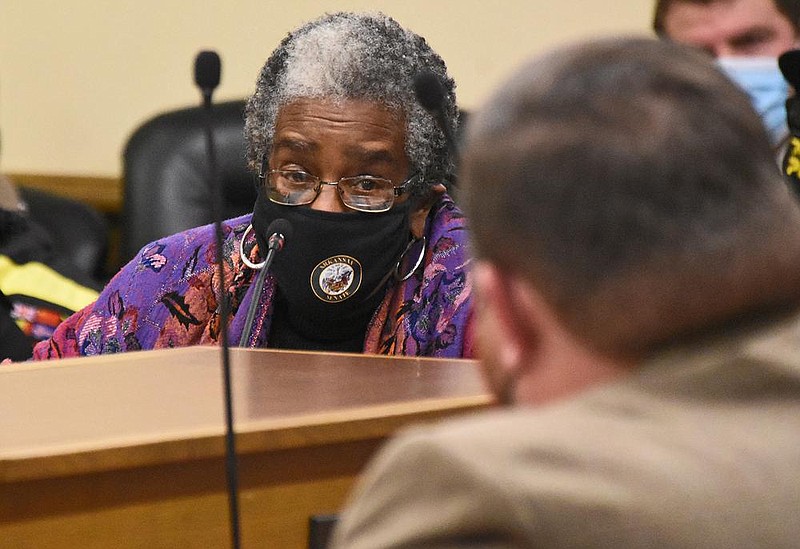 Sen. Stephanie Flowers, D-Pine Bluff, speaks to Sen. Bob Ballinger, R-Ozark, while testifying Wednesday in a Senate Judiciary Committee hearing against Senate Bill 24, which Ballinger sponsored. Flowers said current state laws adequately allow people to use deadly force in self-defense. “It seems that we are encouraging people not to avoid confrontations when it can be successfully done,” she said. More photos at arkansasonline.com/114sb24/. (Arkansas Democrat-Gazette/Staci Vandagriff)

Senate Republicans advanced legislation Wednesday to remove the duty to retreat from Arkansas' self-defense laws, a significant first step in enacting a "stand your ground" law that has long been sought by gun-rights proponents.

The legislation, Senate Bill 24 by Sen. Bob Ballinger, R-Ozark, was passed by the Senate Judiciary Committee by a 5-2 vote after more than two hours of debate. A similar bill sponsored by Ballinger in 2019 failed to pass the committee, after a single Republican joined Democrats to block it.

Since then, however, Ballinger and other bill sponsors worked with the Arkansas Prosecuting Attorneys Association -- past opponents of the proposal -- to ensure that they would remain neutral. The judiciary committee also gained an additional Republican member, virtually ensuring the bill would head to the floor.

Also supporting the bill Wednesday was the National Rifle Association, which has advocated for stand-your-ground laws in other states.

"You're going to hear that this is a license to kill, to shoot first and ask questions later," Ballinger said Wednesday. "That isn't the way it is in California, Illinois or the 34 other jurisdictions, other states, that have it."

Opponents of the bill, including gun-control groups, pointed to studies showing that similar laws in other states preceded increases in gun homicides and that the "stand your ground" defenses are disproportionately successful in cases where the victim is Black. Supporters of the bill argued that those statistics are flawed.

"Experts overwhelmingly agree that this bill is not needed and that it will only serve to make Arkansas more dangerous, especially for Black people and other people of color," said Kate Fletcher, a spokeswoman for Moms Demand Action for Gun Sense in America, a group that opposes SB24.

A spokeswoman for Gov. Asa Hutchinson said Wednesday that he is still tracking the bill and has not yet decided whether to support or oppose it.

The two senators who voted against the measure, Jim Hendren, R-Sulphur Springs, and Stephanie Flowers, D-Pine Bluff, argued that Arkansas' current laws were sufficient to protect people who need to use deadly force in self-defense.

"I don't think it's a better policy than what we have in our law now," Flowers said. "It seems that we are encouraging people not to avoid confrontations when it can be successfully done."

Flowers, who is Black, attracted national attention two years ago when a video of her emotional plea against a stand-your-ground bill attracted millions of views. Flowers said she feared that people like her son would suffer the consequences of the bill if used by armed vigilantes, and when she was told by the committee chairman, Sen. Alan Clark, R-Lonsdale, that she needed to stop, she responded "No, I don't! What the hell you gonna do, shoot me?"

Flowers addressed her past comments again Wednesday, jokingly telling the committee, "I'm not trying to get [another] viral video."

Later Wednesday, Ballinger attempted to suspend the rules on the Senate floor so that the bill could be heard there today. Ballinger explained that his rush to get the bill to the floor was so that lawmakers "won't have all weekend to deal with emails and telephone calls" on the bill.

The 35-member Senate voted 20-8 in favor of Ballinger's motion, but did not reach the two-thirds majority needed to suspend the rules and fast-track the bill.

Speaking to reporters later, Ballinger said the intent of his motion was to move forward with other business in the Senate.

"That is not going to change people's mind because someone clicked on something and so it sends them to an email," Ballinger said. "The idea is that we can get this off our desk, focus on other things and get other things done."

Loggains also gained attention last year over his relationship with a woman convicted of killing former state Sen. Linda Collins, R-Pocahontas. Loggains was engaged to Collins' killer, Rebecca O'Donnell, and spoke adamantly in her defense before stating that he had been deceived by his fiancee after O'Donnell pleaded guilty. Loggains has not been charged with any crime related to Collins' death.

Both Loggains and Morgan asked lawmakers to change language in the bill stating that a person must be "lawfully present in the location" before using deadly force in self-defense. Morgan said the change was needed to preempt possible policy changes during Democratic President-elect Joe Biden's administration.

"What is lawful today in American may not be lawful a month from now," Morgan said.

After hearing from Morgan and Loggains, members of the committee voted to cut off debate on the bill and quickly pass it.

The full Senate may consider SB24 as soon as next week. 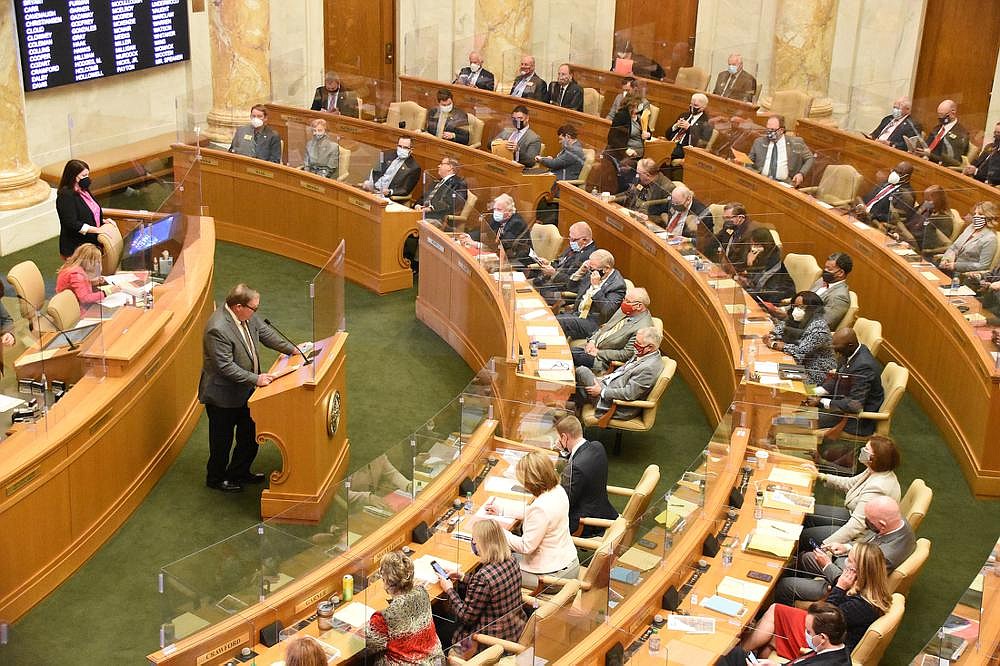 In a meeting of the full House on Wednesday, Rep. Lane Jean, R-Magnolia, explains House Bill 1085, the general appropriation act for the judicial and legislative government branches’ expenses. The House voted 96-0 to send the bill to the Senate for further action. (Arkansas Democrat-Gazette/Staci Vandagriff) 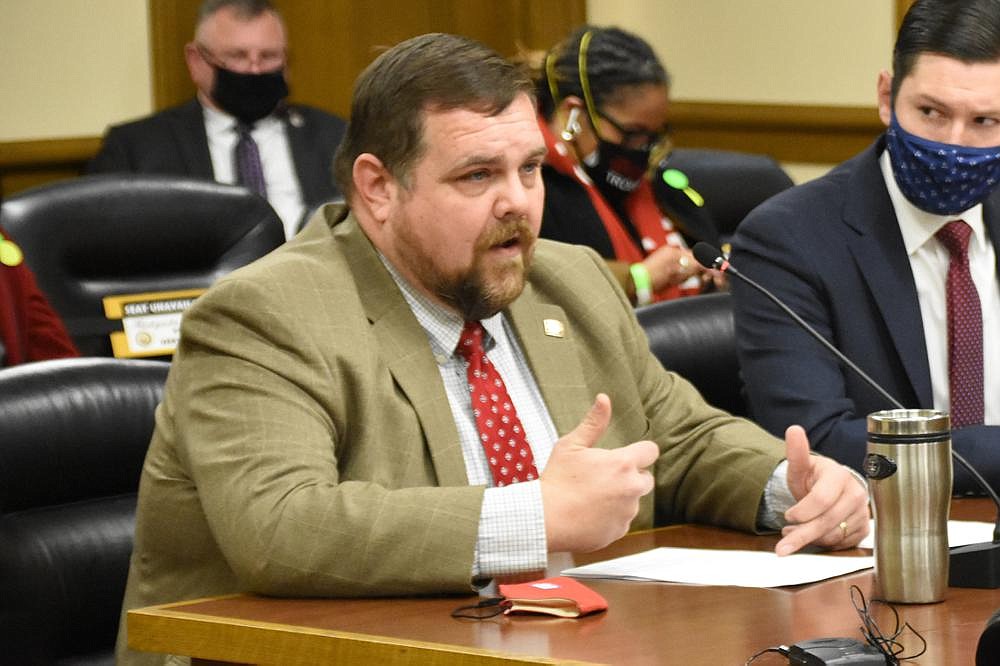 Sen. Bob Ballinger presents Senate Bill 24, the “stand your ground” legislation, during the Arkansas Senate Judiciary Committee hearing Wednesday. The bill, which was endorsed by the committee, is also supported by the National Rifle Association. (Arkansas Democrat-Gazette/Staci Vandagriff)