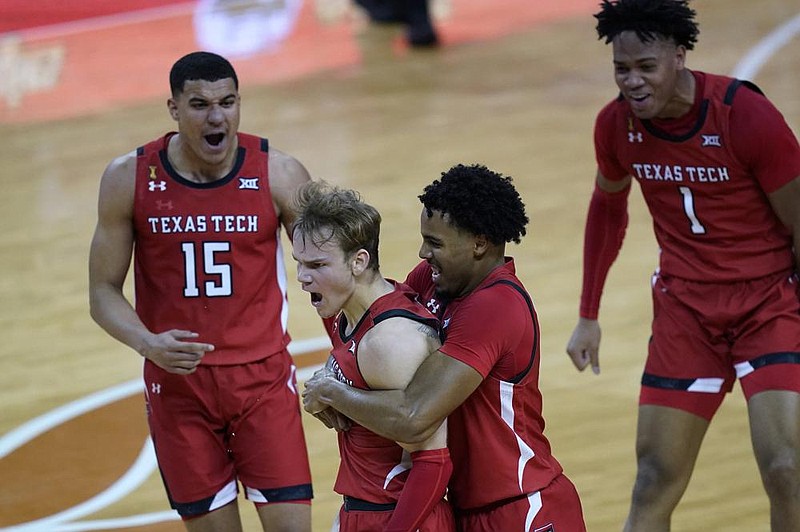 Texas Tech guard Mac McClung is grabbed by guard Kyler Edwards as they celebrate McClung’s game-winning basket that gave the No. 15 Red Raiders a 79-77 victory over the No. 4 Texas Longhorns on Wednesday in Austin, Texas. (AP/Eric Gay)

AUSTIN, Texas — Mac McClung made a long jumper with 3 seconds left and No. 15 Texas Tech rallied to beat No. 4 Texas 79-77 on Wednesday night, ending the Longhorns’ perfect start in the Big 12.

Texas (10-2, 4-1) led almost the entire game and a blistering start against one of the top defensive teams in the country had the Longhorns in control before a sloppy finish and some late Texas Tech three-pointers snatched the win for the Red Raiders (11-3, 4-2).

McClung’s shot was originally ruled a three-pointer before a video review. Texas had a final chance, but Matt Coleman’s desperation three-pointer never came close to the basket. Coleman also missed a shot in traffic for the lead with 17 seconds left.

“I’ve got a lot of confidence in Mac,” Texas Tech Coach Chris Beard said. “He has the courage to take those shots.”

McClung finished with 22 points. Andrew Jones had 20 for Texas, but scored just two points after halftime as the Red Raiders shut him down. Jericho Sims added 16 for Texas, but was just 6 of 14 on free throws, with two key misses late.

Texas led 77-73 after Courtney Ramey’s three-pointer with 1:40 to play. McClung then made two free throws, Sims missed two free throws for Texas before the Red Raiders tied it when Ramey got sloppy passing the ball inbounds, creating an easy tying layup for Tech’s Terrence Shannon. McClung then buried his long shot from the right wing.

“Our guys scrapped. They really did,” Beard said.

Samuell Williamson added 15 points and 11 rebounds for the Cardinals (9-1, 4-0), who blew nearly all of a 16-point second-half lead before finally putting this one away in the final six minutes as the Demon Deacons went cold.

It marked the best start in any league since for the Cardinals since winning their first eight Big East games during the 2008-09 season.

Cormac Ryan scored 16 and Trey Wertz 13 for the Fighting Irish (3-8, 0-5), who lost their fourth in a row and fell to 0-11 against Virginia in conference games. Nate Laszewski, who burned Virginia for 28 points in their first meeting, finished with 12.

COLUMBUS, Ohio -- Duane Washington Jr. scored a career-high 23 points to lead No. 21 Ohio State to an victory over Northwestern.

Justin Ahrens added 12 points, hitting four three-pointers, including a timely one late in the second half to help preserve the Buckeyes lead.

ATHENS, Ga. -- Freshman Sharife Cooper had 28 points, 5 rebounds, 12 assists and 2 steals and Auburn never trailed in its victory over Georgia.

Devan Cambridge scored 14 points for Auburn (7-6, 1-4), which snapped a four-game skid. JT Thor, Allen Flanigan (Little Rock Parkview) and Jaylin Williams had 11 points apiece and Jamal Johnson added 10. Williams and Cambridge each had five of the Tigers' 14 blocks -- the most in a game by a Division I team this season.

Williams and Cambridge hit back-to-back baskets to cap a 13-3 run that gave Auburn a 10-point lead about 7 minutes into the game. Georgia (7-4, 0-4) scored the last five points of the the first half and opened the second with a 7-0 spurt to pull within 45-41, but the Bulldogs missed their next seven shots. The Tigers scored 22 of the next 25 points to make it 67-44 with about 11 minutes to go and Georgia trailed by double figures the rest of the way.

Freshman K.D. Johnson had 21 points, seven rebounds, two blocks and four steals for the Bulldogs. The 6-1 guard, who was Georgia's top-rated recruit in the class of 2020, did not play in the first 10 games of the season due to academic issues.

Sahvir Wheeler added 19 points, 5 assists and 4 steals for Georgia and Toumani Camara scored 12 points. Both players fouled out in the closing minutes.

Jay Jay Chandler scored 12 points off the bench to lead Texas A&M. Gordon finished with 11 points and Miller had 10 points and eight rebounds.

The Bulldogs led 50-44 with 5:14 to play. Miller scored the next five points, Savion Flagg added a dunk, and Gordon added an alley-oop dunk plus a three-pointer and the Aggies led 56-52 with 1:52 left.

Jalen Johnson split a pair of free throws for Mississippi State to cap the scoring with 57 seconds left.

Iverson Molinar, whose 19.2 points per game is third in the SEC, had 16 points to lead the Bulldogs. 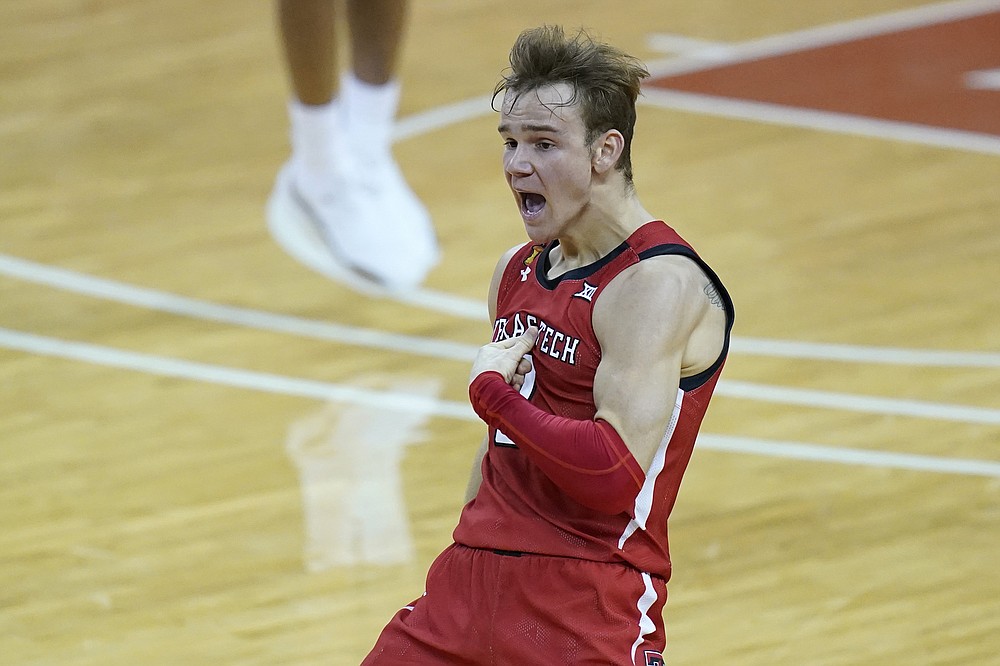 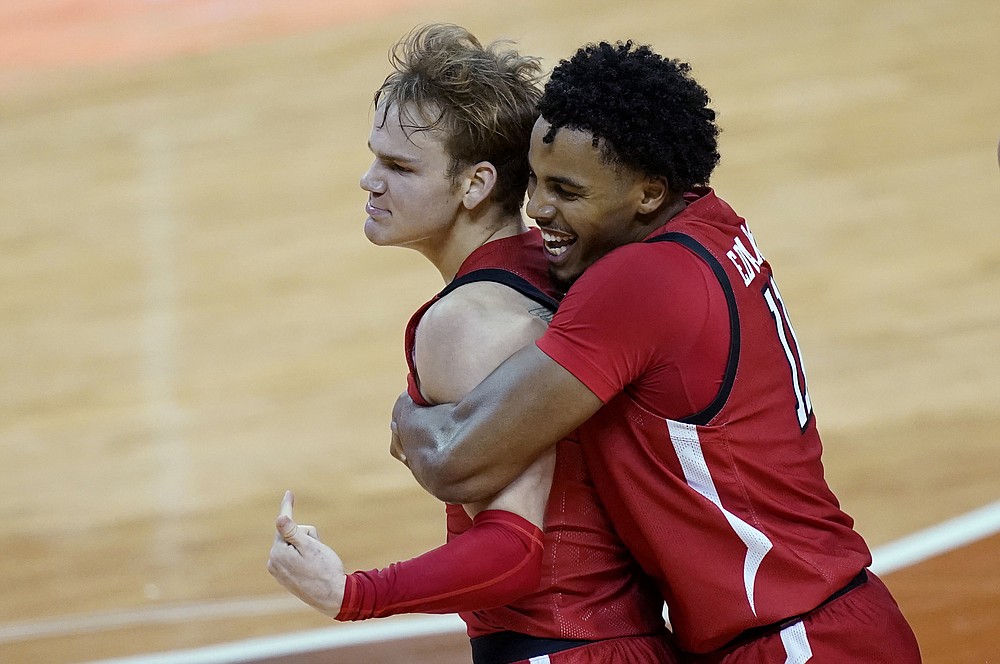 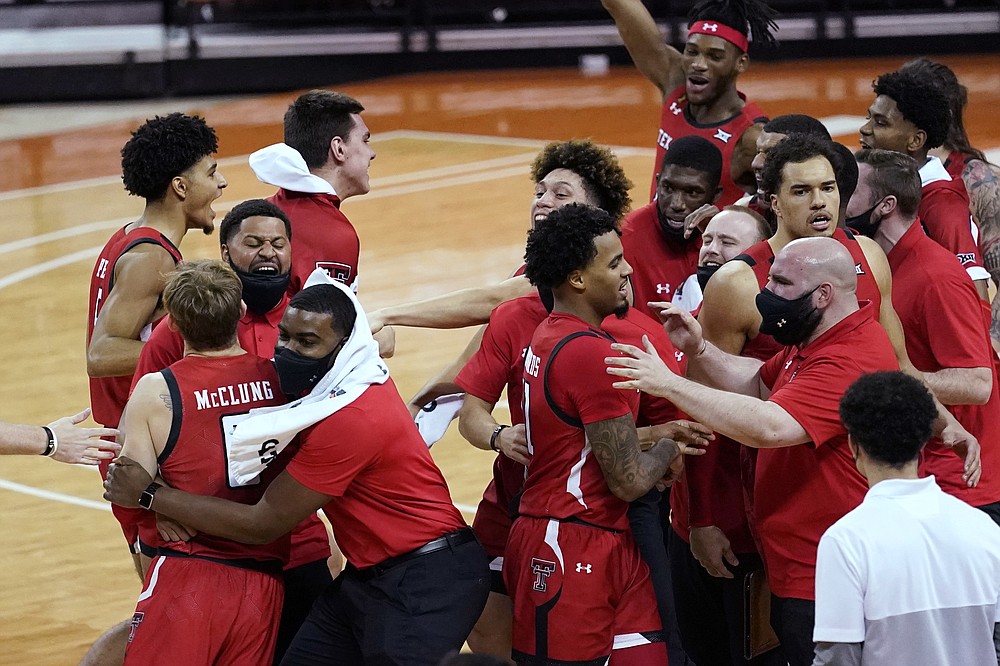 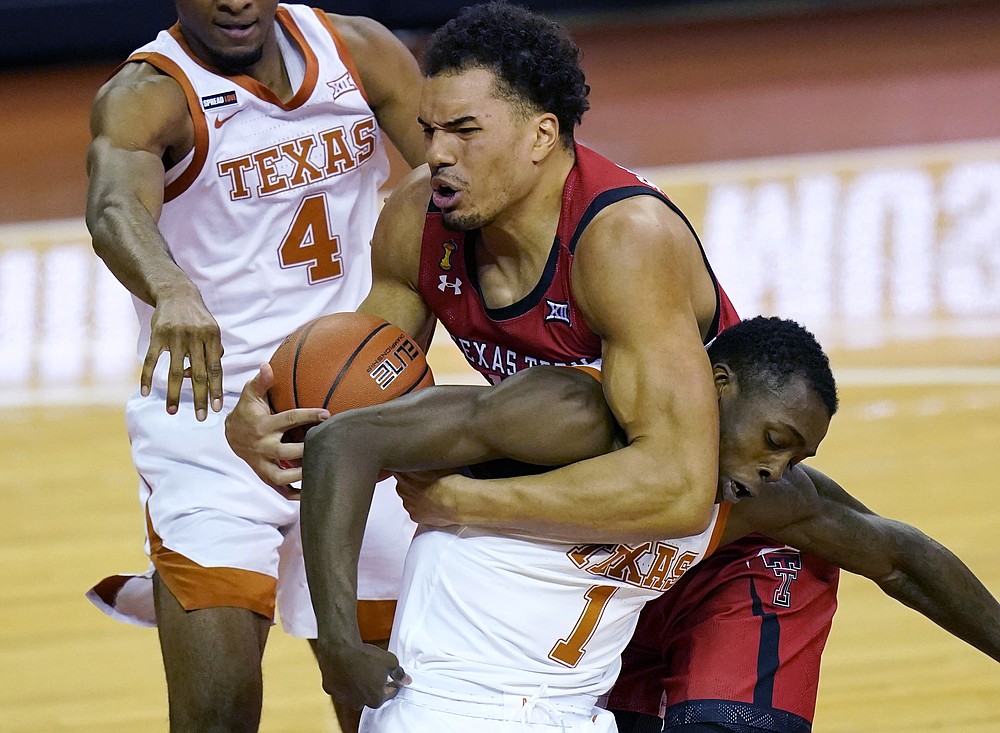 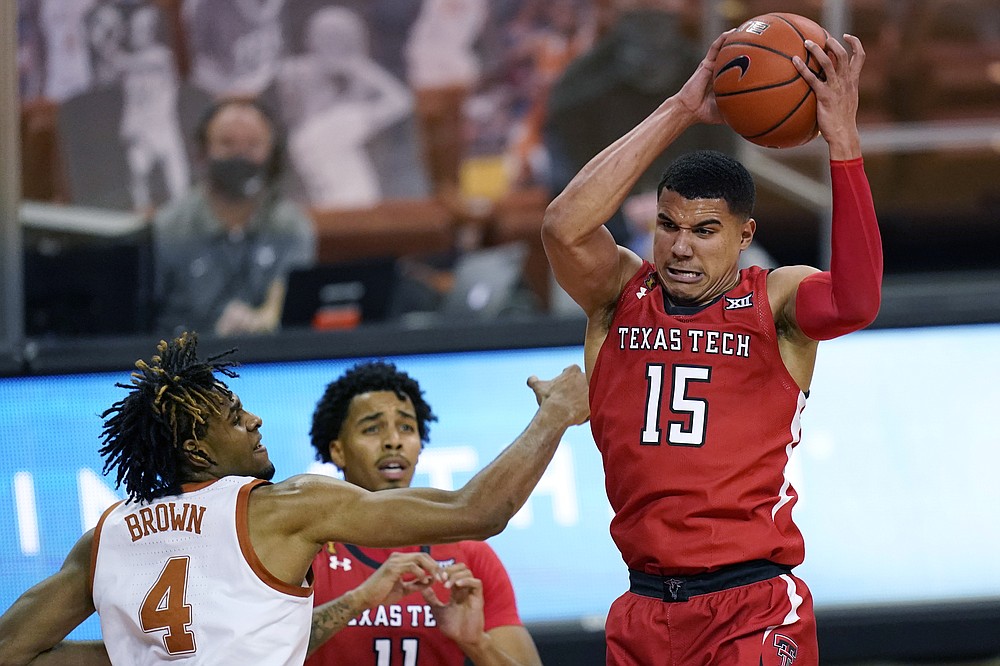 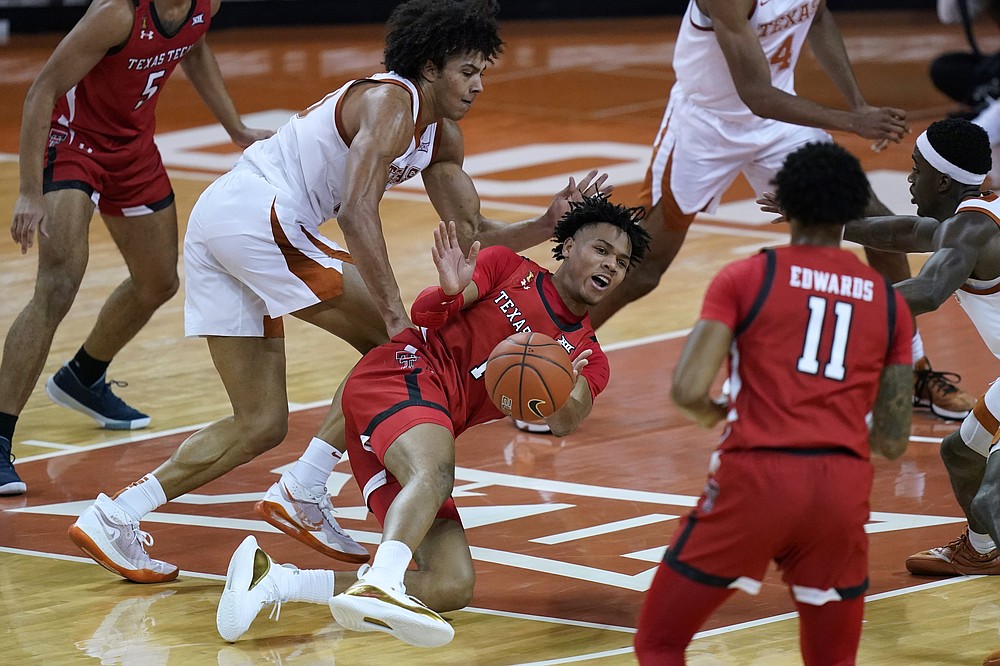 Texas Tech guard Terrence Shannon Jr. (1) passes the ball away from Texas forward Jericho Sims (20) as he loses his balance during the second half of an NCAA college basketball game Wednesday, Jan. 13, 2021, in Austin, Texas. (AP Photo/Eric Gay) 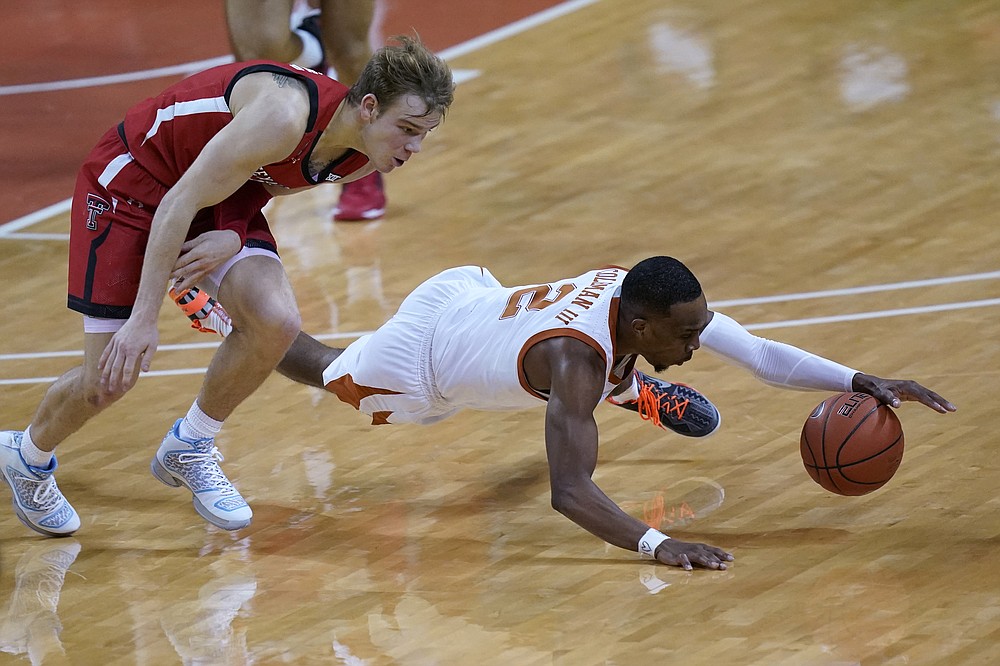 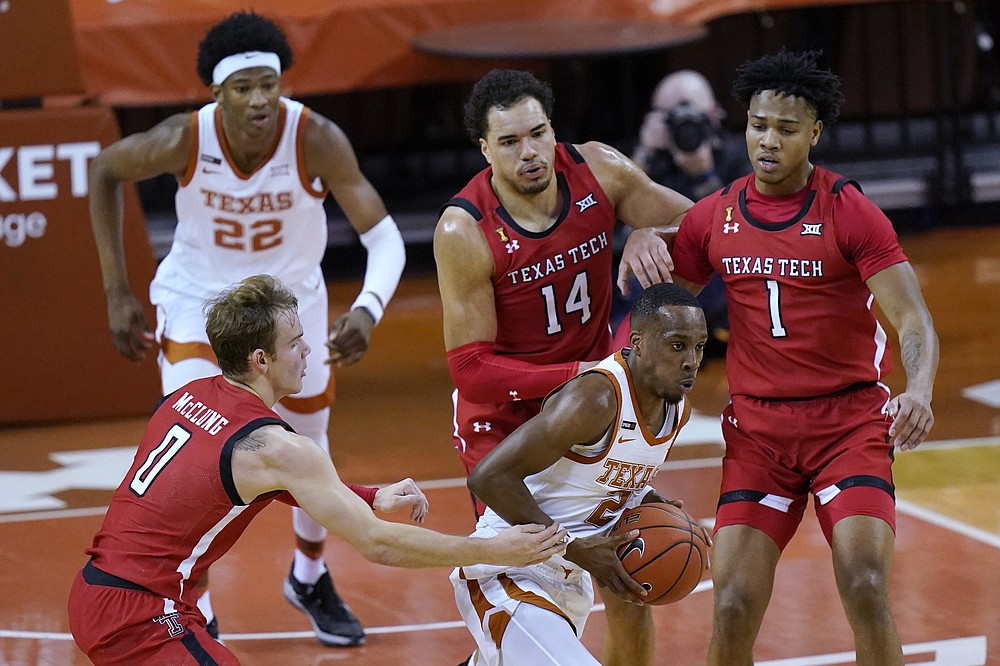 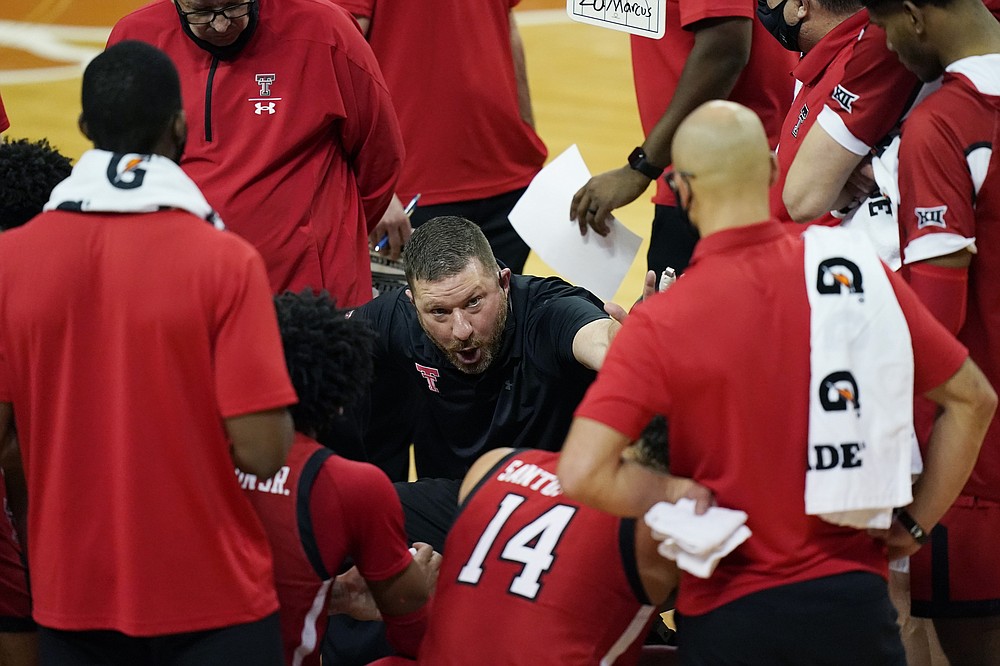 Texas Tech coach Chris Beard, center, talks with the team during the first half of an NCAA college basketball game against Texas, Wednesday, Jan. 13, 2021, in Austin, Texas. (AP Photo/Eric Gay)