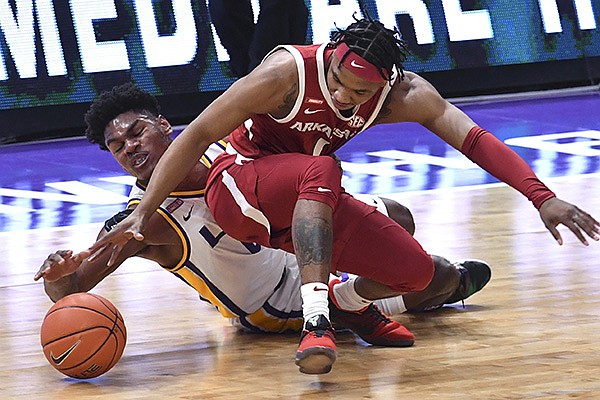 University of Arkansas Coach Eric Musselman, who hates to call timeouts, called three in the first 14 minutes of Wednesday night's game against LSU.

Musselman called the timeouts out of desperation, but they only momentarily stopped the Tigers' mauling of the Razorbacks.

"I would've called three more or five more or 10 more if I would've had more," Musselman said.

LSU built a 31-point lead in the first half and coasted to a 92-76 victory at the Maravich Assembly Center in Baton Rouge that wasn't as close as the final margin indicated.

"I need to do a better job coaching," Musselman said.

[Video not showing up above? Click here to watch » https://www.youtube.com/watch?v=jxQuLPZ-Rr4]

"It was really fun out there. Everyone was eating," LSU forward Darius Days said. "When we do that, we go on great runs."

Arkansas freshman forward Jaylin Williams said that during the timeouts Musselman encouraged the Razorbacks to give a better effort.

"He was just telling us we've got to play," Williams said. "Just got to come out there and play harder than what we were and show some fight."

The Razorbacks (10-3, 2-3 SEC) showed enough fight to pull within 51-31 at halftime and 86-73 on Williams' layup with 3:09 left, but the Tigers never lost their hold on the game after taking control in the first seven minutes.

"LSU's really talented and they took it to us," Musselman said.

"They're awesome players," Musselman said. "We had zero answers for Watford and Days. Zero."

There simply were no Razorbacks who could handle Watford and Days physically inside with senior forward Justin Smith missing his fourth consecutive game as he continues to recover from ankle surgery.

"With Darius and Trendon, we were able to exploit some mismatches with their big guys," LSU Coach Will Wade said. "We tried to put some different things in to get the ball to Days and Trendon in different areas. We kind of got the one-on-one matchups we wanted.

Tigers freshman guard Cam Thomas -- who was questionable for the game after injuring his right ankle at Ole Miss last Saturday -- started and scored 17 points. He shot 5 of 15, including 1 of 7 on three-pointers, but hit 6 of 8 free throws. LSU junior guard Javonte Smart had 13 points and five assists.

"I mean, JD, he can score the ball, but he's got to defend," Musselman said. "He's got to move the ball more. Tonight, offensively there was a lot of shallow, hollow -- whatever word you want to use -- stats."

"I thought our shot selection was not good, which is indicative of our shooting percentage," Musselman said. "We had eight assists. We didn't have very good point guard play at all. I thought that LSU was more physical and tougher."

Freshman guard Davonte Davis, who scored 20 points in the Razorbacks' 99-69 victory over Georgia last Saturday in Walton Arena, was 1 of 11 from the field and scored 4 points. Vance Jackson, a senior forward who scored 14 points at Tennessee and 15 against Georgia last week, shot 1 of 8 and scored 2 points.

"When you've got guys combined 2 for 20, you're not going [to win]," Musselman said. "Shoot, I don't see anybody on [LSU's] stat sheet that shot the ball that poorly.

"And quite frankly, our defense was just as bad. It wasn't just offensively."

"I thought our guys did a great job," Wade said. "We were prepared, we were ready to go, we were really focused."

The game was in stark contrast to last season's Arkansas-LSU matchups, when the Tigers won 79-77 at home and lost 99-90 to the Razorbacks in Walton Arena.

"LSU came out ready from the jump," Musselman said. "I thought we had guys trying to do things that are not characteristic of them. Just an overall poor performance."

Musselman took no solace in Arkansas cutting LSU's lead to 13 points late in the game.

"I would hope," Musselman said, "when you're down 30 or whatever, you play a little bit different." 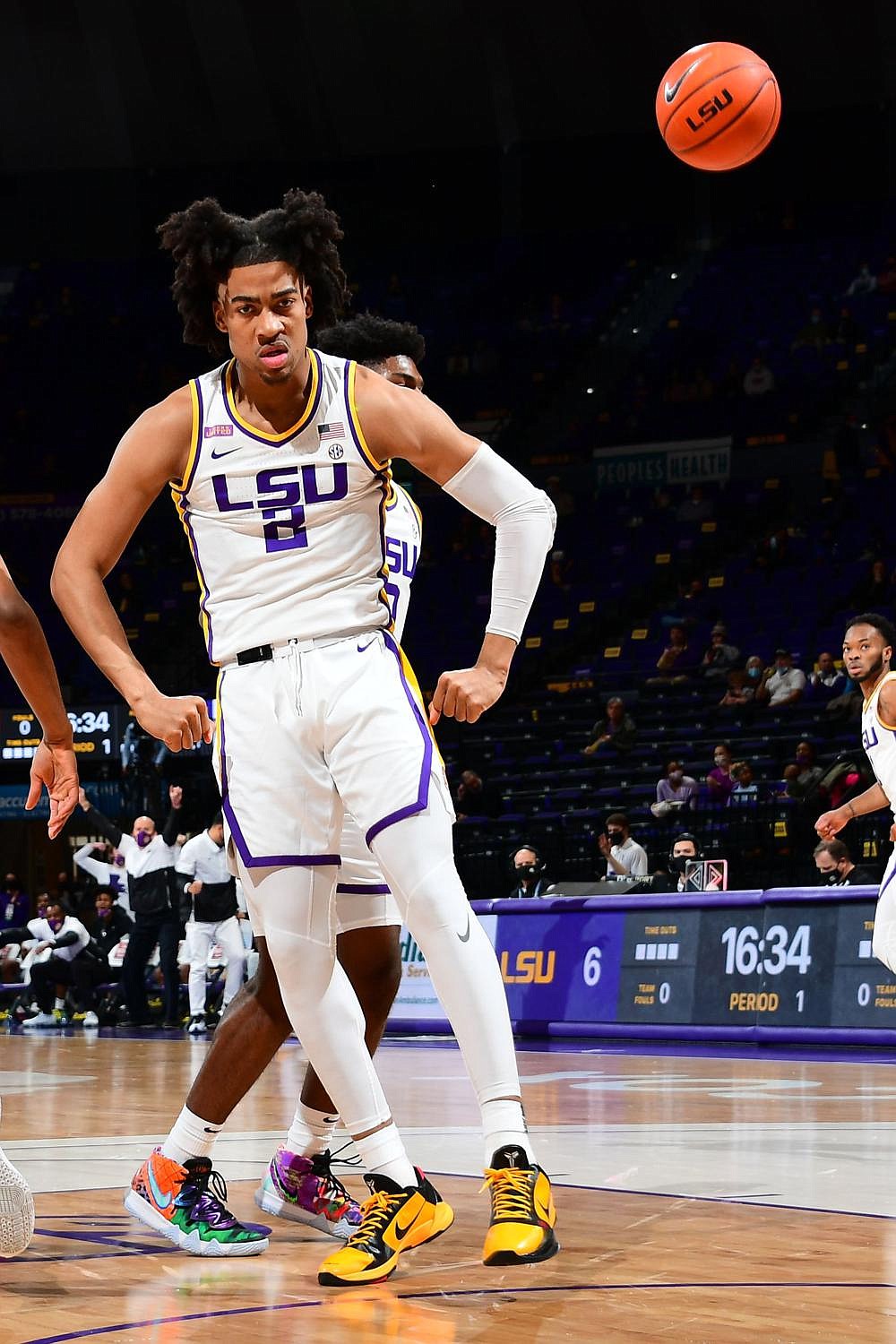 LSU’s Trendon Watford celebrates after a basket during the first half of the Tigers’ victory over Arkansas on Wednesday night at the Maravich Assembly Center in Baton Rouge. Watford led all scorers with 23 points. (Photo courtesy of the SEC)