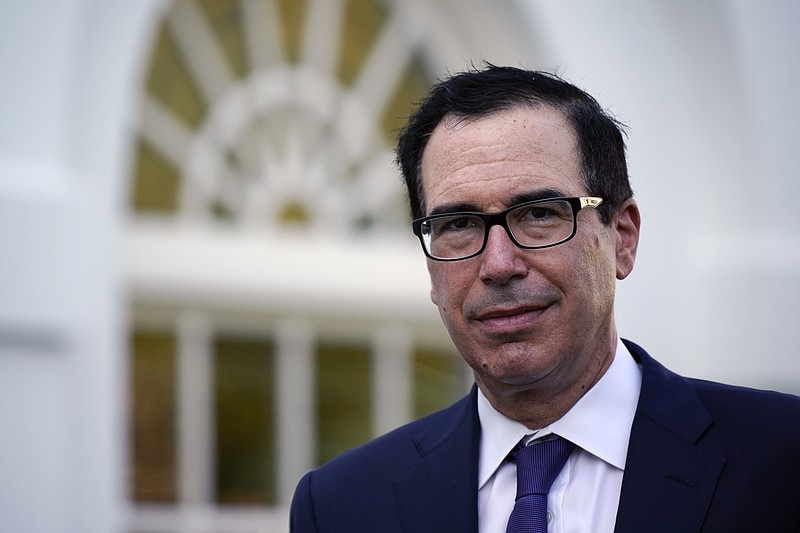 FILE - This Aug. 24, 2020 file photo shows Treasury Secretary Stephen Mnuchin at the White House in Washington. The U.S. government’s deficit in the first three months of the budget year was a record-breaking $572.9 billion. The Treasury Department reported Wednesday, Jan. 13, 2021 that with three months gone in the budget year, the deficit was $216.3 billion higher than the same October-December period a year ago. (AP Photo/J. Scott Applewhite, File)

WASHINGTON -- The U.S. government's deficit in the first three months of the budget year was a record-breaking $572.9 billion, 60.7% higher than the same period a year ago, as spending to deal with the covid-19 pandemic surged while revenue declined.

The Treasury Department reported Wednesday that three months into the budget year, the federal deficit was $216.3 billion higher than in the same October-December period a year ago.

The deficit reflects an 18.3% jump in outlays to $1.38 trillion, a record for the period, while revenue fell 0.4% to $803.37 billion. The red ink results from the difference between revenue collections and outlays.

For just the month of December, the budget deficit totaled a record $143.6 billion.

The shortfall for the 2020 budget year, which ended Sept. 30, climbed to an all-time high of $3.13 trillion. Beginning last spring, Congress passed trillion-dollar-plus spending measures to combat the harm being done to the economy from a pandemic-induced downturn.

The recession, which has seen millions of Americans lose their jobs, has also meant a drop in tax revenue at a time when the demand on government support programs such as unemployment benefits and food stamps has risen.

The report showed that outlays in December were a record $489.7 billion, while receipts were $346.1 billion.

The spending figure did not include a new $900 billion relief package that Congress finally passed after months of wrangling because it was not signed into law until the end of the month. President Donald Trump delayed signing the bill, which he called a "disgrace," because it included only $600 in direct payments to individuals.

President-elect Joe Biden has endorsed boosting the direct payments by another $1,400. He has said that higher amount will be included in another round of relief payments he will ask Congress to approve once he takes office Wednesday.

In addition to direct payments, the December relief bill extended two special unemployment benefit programs aimed at cushioning the pandemic's blow. The unemployment benefits have totaled $80 billion from October through December, up from $5 billion during the same period in the past budget year.

The Congressional Budget Office has forecast that this year's deficit will total $1.8 trillion, and the deficit will remain above $1 trillion each year though 2030. The Congressional Budget Office forecast for this year was made before the December relief package was passed and also does not take into account any extra spending that Congress may pass after Biden takes office.

Nancy Vanden Houten, senior economist at Oxford Economics, forecast that this year's deficit will hit at least $2.6 trillion, an estimate that assumes the stimulus checks will be boosted to a total of $2,000.