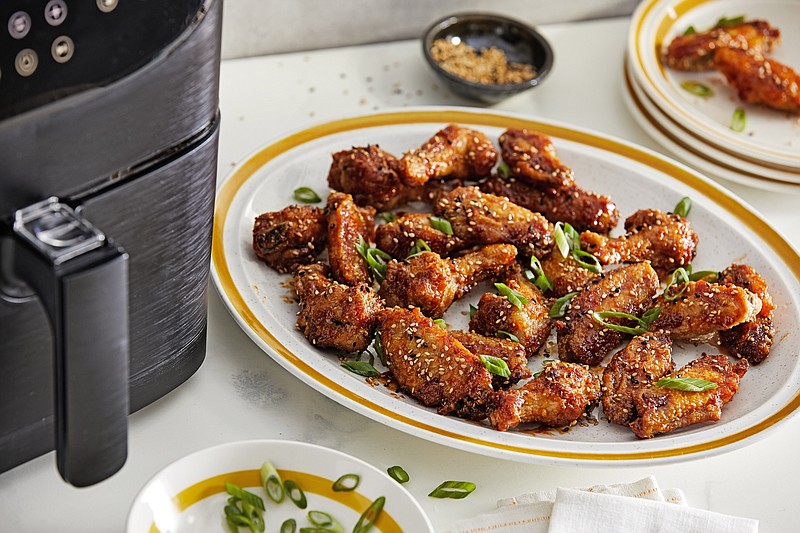 If I applied Marie Kondo's simple yet polarizing question to my kitchen appliances, only my air fryer would make the cut. It has undeniably sparked a particular kind of pandemic joy: the pleasures of safe experimentation, mental activity and the illusion of control.

I had resisted buying an air fryer precisely because too many friends had gushed about them with obnoxious enthusiasm.

I groused — as author and Food Network personality Alton Brown did on Twitter in early October — that these miniature convection ovens aren't fryers at all. Instead, they surround food in an El Niño of hot air, cooking with little or no oil. Baking and roasting, yes; frying, no. Plus, chances were high that any new countertop appliance would soon join my junk-cabinet graveyard of George Foreman grills, bullet juicers, electric griddles and Tupperware.

But then a friend mentioned the magic words: "egg rolls." The last time I'd bitten into one that snapped, crackled and popped, I was dining at my favorite Vietnamese restaurant in the Before Times. I had tired of sad, soggy takeout egg rolls that needed broiler time to reach their full crunch potential.

Armed with my air fryer and anticipation, I fired up chicken wings, roasted carrots and broccoli, citrus salmon and moist banana bread. Trying to recapture the spontaneity the pandemic has drained from everyday life, I tossed fruit into the air fryer. An unpeeled plantain yielded steamed — but not appropriately caramelized — maduros. I rescued one of summer's last peaches from incipient mealiness with a single pat of butter and brown sugar. The infamous mushiness of a whole Red Delicious apple became a delightful no-added-sugar applesauce.

Fred Van der Weij, the 58-year-old "father of the air fryer" as we know it, understands that compulsion to try new things as an entrepreneur and eater. A product designer and engineer based in the Netherlands, he had heard of Chinese-made, smaller convection ovens. But they couldn't quite produce what he craved: the perfect fries with little hassle (it's not just the Belgians and their frites).

Those appliances "couldn't make french fries of very good quality. They were dry and not very crispy at all. They needed a long time for preparation. French fries were the first thing we tried, because they're very sensitive to heating: too much, too long, too short," he said. Then came croquettes, meats and other snacks.

On a recent Zoom call, van der Weij walked me through his workshop and pointed out early prototypes. The first attempt was rustic, nothing more than a box of pale wood with a metal cooking bowl that he handcrafted himself around 2006. He pitched a short, squat crimson machine using the air-cooking method he had patented to the multinational electronics maker Philips. And then finally, a sleeker black model produced by Philips' global design team and introduced at a consumer electronics fair in Berlin in 2010. Three years later, Philips began selling its air fryer in the United States. Estimates vary, but the worldwide air fryer business market in 2018 might have been worth as much as $900 million.

That mass proliferation is the result of the concept's legs — easier cooking with less oil and in less time — and the power of global business. But it may have to do with the way appliances, particularly the air fryer, can make people feel.

All I do is buy and load ingredients in the basket with a minimum of planning. But I feel like I am doing something. Listening to the automated heavy breathing of my air fryer at work, I puff out my chest in confidence in a task well done — what a psychologist might call self-efficacy.

Perhaps it seems odd to think of sentiment and appliances. But it shouldn't in this moment when going to the grocery store feels like an exhausting feat. Nor is it surprising in the broad sweep of U.S. history, where identity and household technology have always merged.

Advertisers have long tried to tell us that the right appliance might make us happier. A 1970 Frigidaire advertisement shows a svelte model wearing a minidress, an astronaut's helmet, and silver pumps while casually leaning on a refrigerator in three fashion colors, including a hideous rouge and a cobalt blue. "What these buoyant colors can do for your kitchen, for your spirits is just short of unbelievable!" Marketing is rarely subtle, but it is the art of creating or channeling desire into transactions.

While I don't expect my appliances to double as mechanized mood elevators — or see myself as particularly suggestible to advertising influences — part of my affection for the air fryer comes from wanting to be a low-effort "early adopter" of new technology, if only in the confines of my kitchen. And pandemic-weary as I am, and cooking-impatient even in the best of times, I also want to make meals without complications or kitchen marathons.

The air fryer is a modest investment and scant risk (no oil splatters!), the margins for error typically generous. I can pop out the basket and lay eyes on my fries, see if they're browning or burning. I don't worry about interrupted cooking and letting the heat out of my full-size oven. If I make a mistake, I reload and start over. Yes, you can do that with any oven, but not in such quick-quick time. The trial-and-error that is cooking never felt so adventurous yet low-stakes. This is a risk I can take.

Air frying is accessible enough that Tanya Harris, a self-confessed former non-cook and ex-public defender, has become a professional food blogger and recipe developer. About half the recipes on her website, My Forking Life, were designed for an air fryer.

She wasn't exactly a candidate for "Worst Cooks in America," but the Raleigh, N.C., mother of two now laughs about serving a disastrous mess of a lemon meringue pie to her mother-in-law and pasty, unseasoned chicken-breast slabs to her now-husband during their courtship.

Now she makes spatchcocked chicken, snackable roasted chickpeas and applesauce muffins (yes, you can bake!) in her air fryers. She tests recipes on the trio of popular models that her readers are likely to have, but she has eight air fryers and won't rule out buying more.

Among her common-sense tips: Don't go too small when buying an air fryer. Harris recommends 5-quart machines for families and adjusting serving sizes as needed (as a singleton, I opted for a smaller one). She avoids batters — most air fryers can't handle wet ingredients dropped directly in the cooking chamber — and is realistic about what an air fryer can do.

"I'm never going to do hush puppies in the air fryer," she added. My personal no-go dish is fried chicken.

Harris' advice boils down to this: Know your fryer, and you can make more than junk food in it. I hear what she's saying on that latter point, although I unabashedly use mine for those egg rolls I had been craving, mozzarella sticks and the delightfully less-greasy-but-still-satisfying versions of restaurant appetizers I won't get now. I use it exactly because I miss those things, the sociability of collective meals, the impromptu "let's go have a drink."

One day, maybe soonish, the thrice-daily act of feeding myself won't push me to wonder about and commiserate with our hunter-gatherer ancestors. They chased, trapped, killed, picked and prepared their food without 21st-century conveniences — but, as scientists increasingly say about modern hunting-gathering societies, probably worked less than the average American does. As baking sourdough bread and intricate meals didn't bring me any succor, as meal planning became melancholic, I wondered anachronistically if rates of prehistoric depression were high.

Maybe not: They probably got a mood-boosting endorphin high from all the running.

Air-frying produces crisp-skinned chicken wings that can then be tossed in your favorite sauce. This spicy Korean-style sauce is made with gochujang (Korean chile paste). The sauce is enough to lightly coat 2 pounds of chicken wings, about 20 or so pieces.

It is possible to cook this recipe in a 4-quart capacity air fryer, but if using a smaller appliance, you may need to cook the wings in batches to avoid overcrowding.

Set the air fryer to 390 degrees and heat for about 5 minutes.

Dry the wings with paper towels and place them in a large bowl. In a small bowl, combine the cornstarch, garlic powder, onion powder and salt.

Cover the wings with the cornstarch mixture and, using your hands or kitchen tongs, toss, ensuring all pieces are coated.

Once the fryer is heated, tap each piece of chicken on the side of the bowl to remove excess starch and place it in the air fryer basket. Wings can touch each other, but do not overcrowd them. Cook in batches if necessary.

Close the basket and cook chicken wings for 30 minutes, turning and rotating chicken about every 10 minutes.

While the chicken is cooking, make the sauce. In a small saucepan, whisk together the honey, gochujang, brown sugar, soy sauce, ginger, garlic and salt until combined. Set the saucepan over medium-high heat and bring to a boil, stirring often. Reduce the heat to low and simmer until slightly thickened, stirring occasionally, about 5 minutes. Remove from the heat.

Once the chicken is done, transfer the wings to a shallow bowl or platter, add sauce and toss to coat. Sprinkle with the scallions and sesame seeds, if using, and serve. 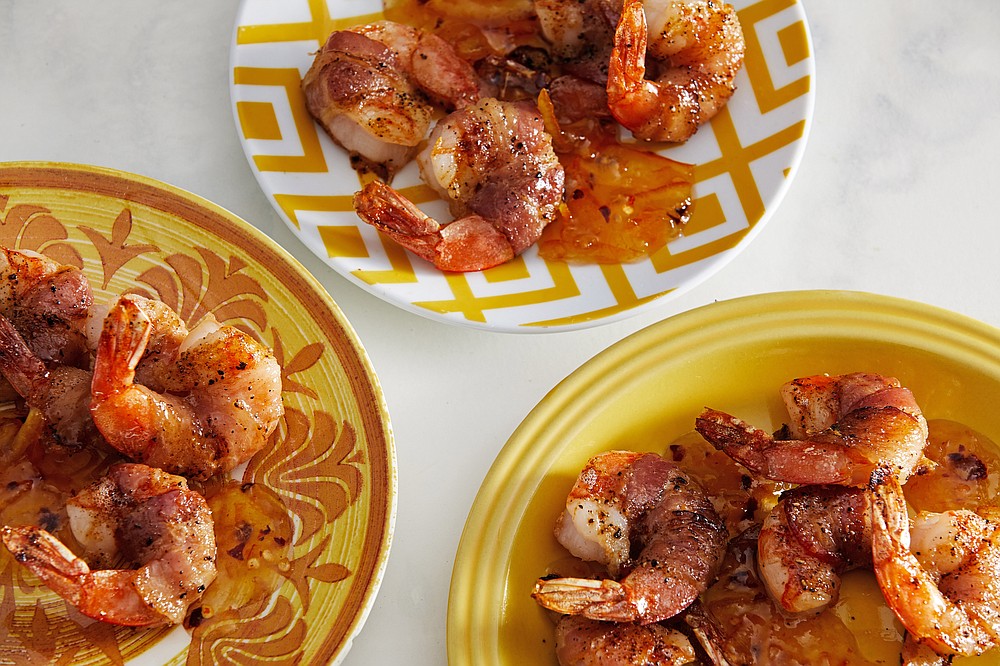 If using a 4-quart air fryer, you can cook 12 jumbo shrimp at once; if it is a smaller capacity, you may have to cook in batches.

Make the shrimp: Heat the air fryer to 400 degrees for 5 minutes.

While the air fryer is heating, pat the shrimp dry with paper towels and season with the Creole seasoning and pepper on both sides. Wind a quarter of a bacon strip around each shrimp, doing your best to cover as much of the shrimp as you can.

Arrange the shrimp in a single layer in the air fryer basket without overlapping. Try to place the shrimp so the ends of the bacon are under the shrimp. Cook for 11 minutes.

Make the sauce: While the shrimp is cooking, in a small bowl, stir together the marmalade, rum, pepper flakes, garlic and ginger until well combined. Taste, and season with more pepper flakes, if desired.

Arrange the shrimp on a platter and serve with the dipping sauce on the side.

Greenlee is a historian, James Beard Foundation Award-winning writer and senior editor at the Counter. She's based in North Carolina.